Tokyo, capital of Japan, and a sprawling metropolis is one of the most populous metropolitan areas in the world!

Tokyo will dazzle you with it’s bight lights and contrasting traditional culture, luring you into a world beyond limits. Why not download the Hostelworld app to ensure you get the most out of your time in Tokyo. Most people assume that Tokyo is an expensive place to visit, but you might be surprised by the amount of free things to do in Tokyo on a shoestring. Perhaps you’ll want to check out the best views of the city, see Shibuya or visit the Emperor at the Imperial Palace. Whatever you decide to do, make sure to keep reading for some of the best things to do in Tokyo for free. 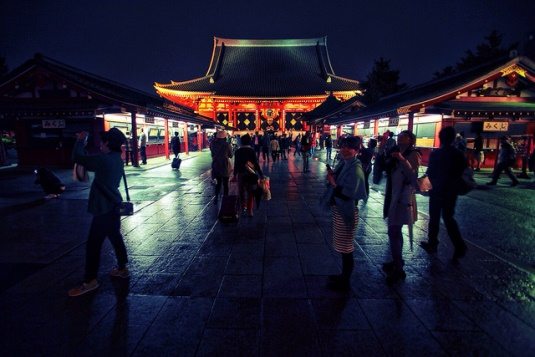 Sensō-ji is the oldest temple you’ll find in Tokyo and is well worth a look. This temple, which is also known as Asakusa Kannon, was founded way back in the 7th century. It’s believed that the smoke from the huge incense urn in front of the temple has healing powers, so when you visit you’ll probably see people rubbing the smoke all over their bodies. There’s plenty to explore in the streets surrounding the temple too, with street vendors selling snacks of all kinds; from more traditional rice crackers and sweet bean cakes to the more modern treats like black sesame ice-cream.

2. Pay your respects at the Meiji Shrine 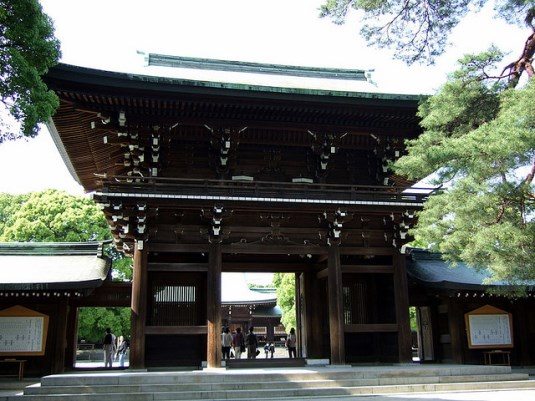 Meiji is a huge Shinto shrine dedicated to the deified spirits of Emperor Meiji and Empress Shoken. It was established in 1920 and is set in a large green oasis in the centre of Tokyo which covers around 178 acres. There are a number of ways to show respect at this shrine, including bowing when entering through or leaving from a ‘Torii’ (or shrine archway).

3. Enjoy one of the many festivals in Tokyo 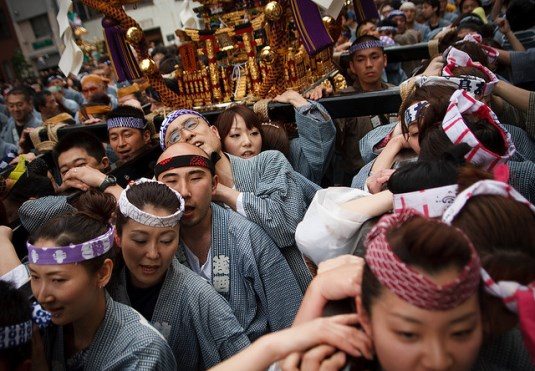 Festivals are a very important part of Japanese culture and take place regularly throughout the year. The focus of these festivals can be incredibly varied and can include flowers, fertility, longevity, the dead, the moon, children, stars and plenty more. During these festivals you’re likely to see processions, food stalls and live entertainment.

The festival pictured above is the Sanja Festival, held on the third weekend of every May at Asakusa Shrine and held in honor of Hinokuma Hamanari, Hinokuma Takenari and Hajino Nakatomo, the three men who established and founded Sensō-ji (see above). 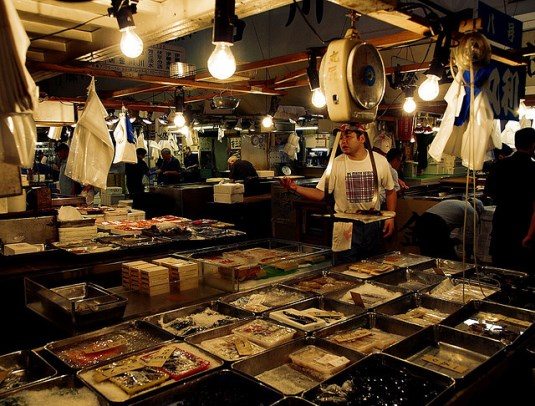 One of the largest fish markets in the world, Tsukiji Fish Market is a very popular spot with locals and early-rising visitors alike. The market, which begins in the wee hours of the morning, sells every kind of sea creature imaginable from top of the line caviar to cheap yet tasty sardines. Free to enter, this market is definitely worth a visit. You’ll be able to sample the freshest sushi and sashimi going, along with some pretty unbeatable oysters. (Also, look out for packets of fish offal containing gigantic eyes and brain, as well as the stuffed polar bear and wild cat)

5. Play with the gadgets in the Sony Showroom

Taking up floors one to four of the impressive 11-storey Sony Building, the Sony Showroom gives you the chance to get your hands on the latest Sony products. On a visit to the showroom, you can fiddle with high-tech gizmos to your heart’s content, many of which aren’t even on general sale yet. You can even try out the latest PlayStation software on a giant, high-quality monitor. Throughout Tokyo you’ll find a number of other showrooms which are free to visit including the Nissan Gallery, the Panasonic Centre, Honda Welcome Plaza and Toyota’s MEGA WEB. 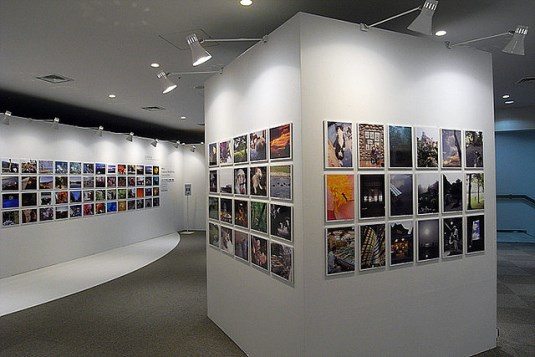 During your stay in Tokyo you’ll find plenty of sights that’ll make you reach for your camera and get snap happy. However, if you fancy a break from taking pictures, why not check out some of the city’s top photo galleries operated by some of the major names in photography. Fuji, Canon, Nikon and Kodak all have photo exhibition showrooms in Ginza while Konica, Minolta and Pentax have showrooms in Shinjuku. At these galleries you’ll see frequently changing amateur and professional exhibitions and some of the galleries also contain small camera museums.

7. Go on a free guided walking tour with a Tokyo local 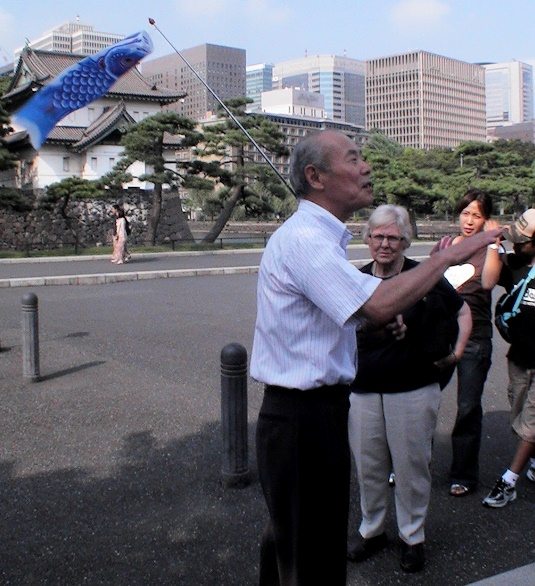 Tokyo boasts a plethora of sights for you to enjoy and what better way to see these sights than by taking a free guided tour with one of the city’s locals to show you the way. The Systematized Goodwill Guide Groups are comprised mostly of students, housewives and retirees, and operate throughout the city. Tours depart from a variety of locations at different times throughout the day and cover attractions like Ueno Park, the Imperial Palace and plenty more. The tours themselves are free and you are only expected to pay for the guide’s travel expenses and any admissions to attractions. Find out more about Goodwill Guide tours of Tokyo.

8. Check out some of Tokyo’s beautiful gardens and parks

Bonsai trees, stone lanterns, Zen rock gardens and colourful carp! You’ll find all this and more on a stroll through some of the Japanese gardens found throughout Tokyo. And what’s more, many of these gardens are free to enter. There’s the Higashi Gyoen Garden which is part of the Imperial Palace, the Nezu-jinja Shrine Garden, famous for its blooming azaleas in May, and the Shin Edogawa Garden, a classical Japanese garden complete with carp and stone lanterns. Tokyo’s Ueno Park is famous for its beautiful cherry blossoms in April and also hosts a selection of museums and more. 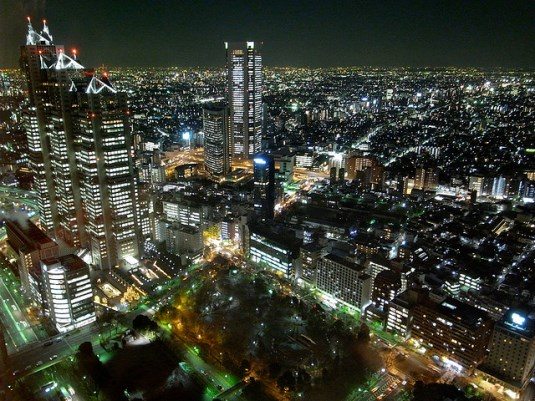 The Tokyo Metropolitan Government Building, or Tokyo City Hall as it’s also known, soars up for 243 meters above the ground. Designed by Kenzo Tange, the building’s twin towers cover 48 floors. Up on the 45th floor is where you’ll find the public observation decks, which can be reached by elevator in a speedy 55-second trip. Once you step onto the observation deck you’ll be faced with stunning views of the Tokyo, especially on clear days when you’ll get brilliant views of Yokohama to the southwest and Mount Fuji to the west.

10. Check out some of the city’s many free museums 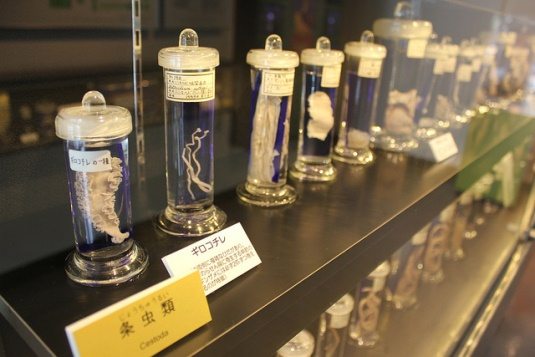 Tokyo has an incredibly wide variety of museums for you to check out. If you’re on a strict budget, don’t worry because many of the city’s museums won’t cost you a single yen to visit. These free museums include the following: Sumo Museum, Parasite Museum, Advertising Museum, Beer Museum Yebisu, Eyeglass Museum, Japan Stationary Museum, Fire Museum, Banknote and Postage Stamp Museum and the Currency Museum. So from sumo to specs, you’ll be able to see them all entirely free of charge. 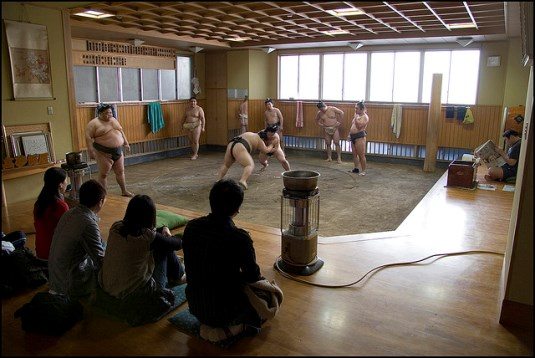 Sumo is one of the major attractions in Tokyo and if you’re lucky you might get the chance to visit a sumo stable during your time in the city. These stables are where sumo wrestlers live and train, and there are over 50 sumo stables in Tokyo. When the wrestlers aren’t involved in tournaments, you can go along and watch their early morning practices. Ask at reception in your hostel to find out if there’s a stable nearby that you can visit. 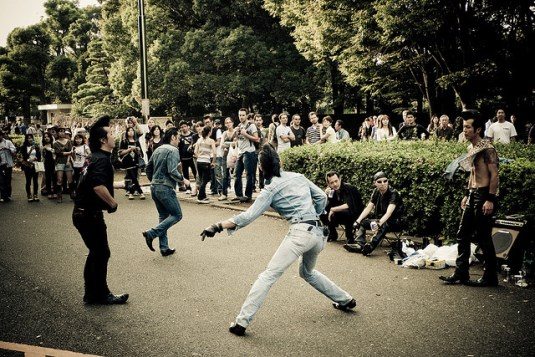 Every Sunday, teenagers gather in this area around Harajuku Station and show off a wide variety of styles including colourful cosplay costumes. In nearby Yoyogi Park, which is one of the city’s largest parks, you’ll see a great variety of interesting characters as you stroll through. Local bands play around the perimeter of the park, people practice martial arts, and a host of other performers entertain the crowds. The ones that you have to see are the Elvis impersonators and ‘greasers’, who have been going 20 years and still go all-out to prove their credentials. A must visit area during your stay in Tokyo for sure!

Described as the Champs-Elysées of Tokyo, the tree-lined boulevard of Omotesando is one of the most famous streets in Japan. All along the street you’ll find the flagship stores of some of the world’s top designers, making it an ideal spot to indulge in some window shopping. Along the stretch you’ll also see some great examples of innovative modern architecture designed by celebrated Japanese architect, Tadao Ando.

14. Go for a jog around the Imperial Palace 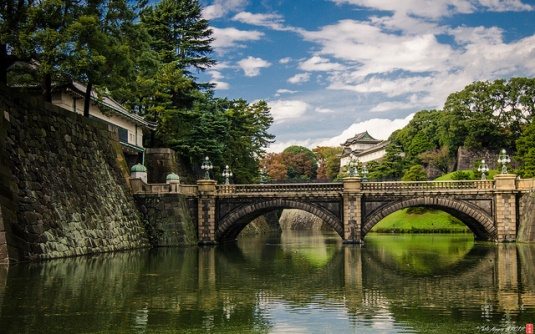 If you’re in the mood to combine your sightseeing with something a bit more active, be sure to check out the 5km jogging course around the Imperial Palace. It’s free to use and very popular with the locals. Along the way, you’ll catch a glimpse of a selection of sights including the Imperial Palace Public Square, British Embassy, National Theatre and the National Diet (governmental) Building.

15. Soak up the atmosphere in Shibuya 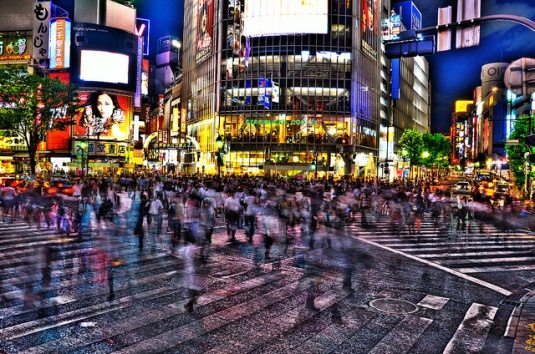 One of Tokyo’s 23 special wards, Shibuya is an incredibly popular area both with locals and visitors. This area is home to the world-famous Shibuya Crossing, which is said to be the busiest pedestrian crossing in the entire world. Shibuya is unique in that every street and area in the district has a completely different atmosphere, offering visitors a fascinating variety of things to see, do and experience. Especially popular with young people, Shibuya is home to a number of world-class department stores, nightspots and plenty more.

There you have it, 15 activities that give you the best of Tokyo without costing you a single yen. So there’s no need to pay attention to any of those people that shake their heads and gravely say that Tokyo is an expensive city. Like all cities, Tokyo is easily affordable so long as you know how.

Can’t wait to begin your Tokyo adventure with Hostelworld? Book your hostels in Tokyo now don’t forget to download our awesome app on Android and iOS to help make your travels easy.