Ah Asia, all year round you treat us all to the cheapest beers, the cheapest, tastiest food and some of the cheapest liveliest accommodation we’re ever likely to find. That’s all on top of the beautiful beaches, crystal clear seas and, of course, some of the best parties known to man. Oh, how you spoil us. Here are 10 of the best places to party in Asia.

Best Places to Party in Asia: 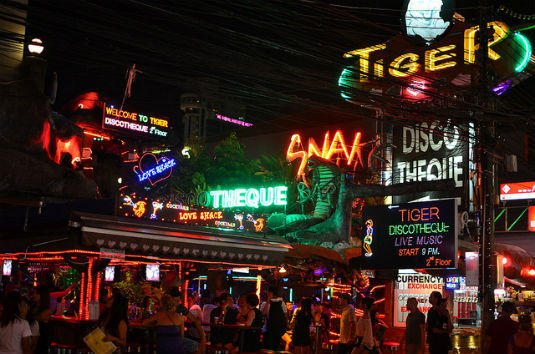 Forgive me for being obvious, but I figured we’d start with a classic. Yeah, it’s not the classiest of parties, but it is something of a hedonist’s wet dream. The party epicentre is no doubt Patong beach, a heaving seaside boulevard lined with brightly coloured bars of all descriptions.

Move inland a little and the neon world continues, with favourites including Rock City for their actually quite incredible cover bands (spot on renditions of 80’s rock singers’ pinched gonads style of singing) and Tiger Bar for its… other kinds of entertainment. Cheap booze, loud tunes and a whole swarm of travellers in the party mood.

Though, be warned, Patong attracts less savoury types of tourism and it can be a little sleazy round these parts. Saying that, it can be quite interesting for some people watching – though watching soon becomes promising ‘I will not become this’.

Our party hostel pick: with its own café/bar showcasing local artists, musicians and DJs, you can’t really go wrong with Bodega (Best Hostel in Thailand winner 2013).

Book a hostel in Patong 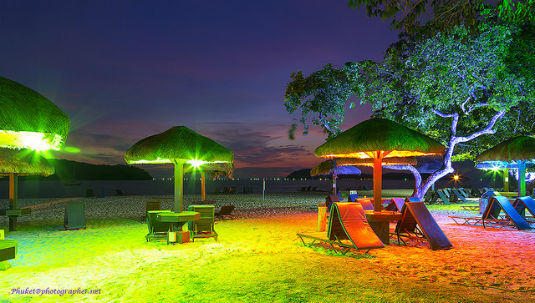 Forget Kuala Lumpur and definitely leave Penang well alone, if you’re looking for a proper party in Malaysia, this little island is it. During the sunlight hours it’s all about relaxing on some of the most perfect beaches you’re ever likely to see (and these will come in very useful later), while in the evening things get a little crazy.

As the sun goes down, ease yourself into the evening with some of the bars on Pentai Cenang beach. Sit at one of the low tables or mats, overlooking the sea and feel the sand between your toes. Then, once that big burning ball of flame has finally sunk behind the sea, head toward one of the pulsating bars and dance until you drop. Now recover on that perfect white sandy beach, rinse and repeat…

Our party hostel pick: with an awesome owner who will pass on all the tips for the hottest night spots – and even take you there himself – it’s got to be Sarong Hostel.

Book a hostel on Langkawi 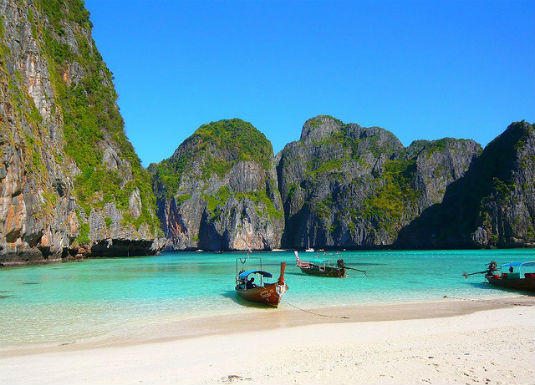 Koh Phi Phi offers a proper party with an element of the chill to boot. At night, you’ll find every bar on the island rammed. From the beach bars with their fire shows to the mini-clubs on the hostel strip, all fuelled by cheap beers and infamous ‘buckets’, you’ll be able to find all you need.

During the day, you can slip slowly in and out of your hang over induced coma on one of the numerous beaches or, even better, visit the famous beach from the film… well, The Beach. Otherwise there’s all the cheap pad thai you could ever hope for to soak it all up all that vicious booze. Or you could just go with another Singha. You know, a bit of hair of the dog…

Our party hostel pick: jumping bar and right by the beach, what more could you need? Has to be Stones Bar Dorm Rooms & Restaurant. 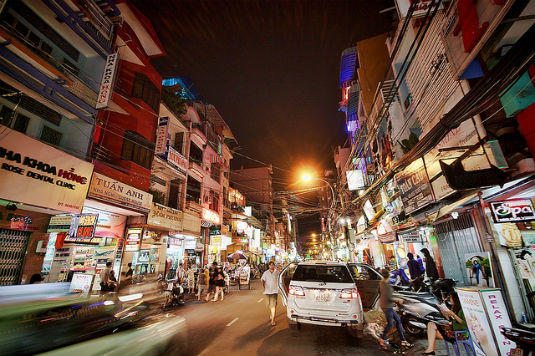 I’m not so sure if the founder of the Communist State of Vietnam quite envisioned this for his namesake city. Still, that victory was for the people and the people must go where the party is…

Hit up Pham Ngu Lao when the sun starts to fade, as the evening comes the place becomes alive with a mix of locals, expats and travellers all sinking cheap beers at the roadside cafés. Be sure to grab a little grub too, it’s tasty and it will line that stomach in preparation for the night’s celebrations (I know eating’s cheating, but they who eat smart, stand last… that didn’t quite work, did it?).

Once you’ve made your way through the selection of cafés, bars and pubs and the clock strikes midnight, then why, it’s time to kick it up a gear. The obvious choice is Go2. It’s not necessarily the best choice, but it’s the choice most people make, and it’s cheaper than Vasco’s or slightly tritely named Apocalypse Now.

Our party hostel pick: budget bar spinning tunes right downstairs – you have to go for The Hideout Hostel Saigon.

It was a tossup between the country’s capital, Manila, and this little bad boy, but ultimately Boracay had to win out. It had to really, because if you’re going to be partying in Asia, you’re going to need those beaches, because no one – and I mean no one – wants to recover from the night before in a sweaty dorm room.

While the island of Boracay is split up into rather military sounding ‘stations’, nothing else on the island is anywhere near so disciplined. Attracting some of the best DJs on the planet and with over four kilometres of beach, mainly lined with bars and cheap beers, it’s a hedonistic paradise.

Our party hostel pick: live music, beers and good eats right on the beach is always a winning combination – hit up Frendz Resort.

Book a hostel in Boracay 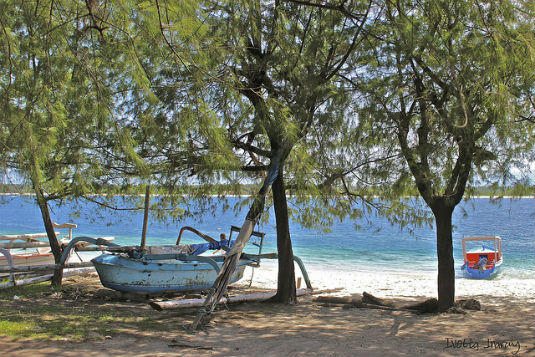 Despite being a relatively traditional country, there are definitely places in Indonesia that know how to tear it up, the top being Gili Trawangan. This is the largest of the Gili Island archipelago and easily the wildest, mainly because it’s a place that the cops don’t travel to.

The three huge parties that the island runs each week have a pretty cool atmosphere and, unsurprisingly, run well into daylight. After each one, the island usually uses the night or two in between to recover and recharge before doing it all again. Well worth a look.

Our party hostel pick: their rooftop bar is fast becoming backpackers’ favourite warm-up spot, so it ain’t hard to meet folks over at Gili Hostel.

Book a hostel in Gili Trawangan 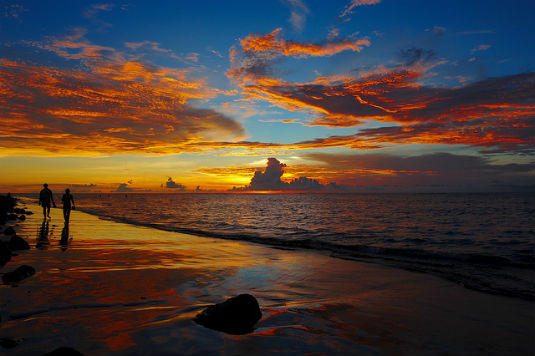 Kuta is where you will find the perpetual party, fit for all ages. Sounds rather like a fairy tale, doesn’t it? Well, it’s not far off.

Things start to get going around dusk. After watching the perfect sunset on the beach with a few bottles of beers it’s time to hit some of the open air bars for some beers and a little chow. Once you feel sufficiently amped up and right for the part, it’s time to seek out a club.

The cool thing here is there’s actually a choice. If you’re looking for something big, loud and sweaty, then there’s no shortage of dance and electro clubs playing host to local and international acts. If you’ve had a large one the last few nights and fancy a little recovery time, or if guitar music is more your thing, you can indulge in a little live music, everything from chilled out jazz and blues to more rocky stuf. Something to suit anyone as they sink a few drinks.

Our party hostel pick: right in the heart of the action and with its own night club, go for Kayun Hostel Downtown.

Book a hostel in Kuta 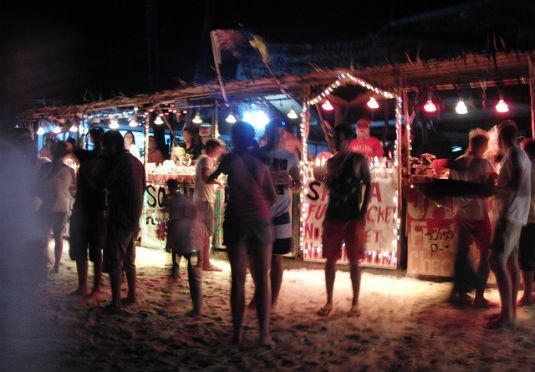 Home of the original Full Moon Party, how could we forget Koh Phangan. Regardless of how well known it is, it’s surely more than earned its place on this list.

Rumoured to have begun when a group of backpackers sat upon the beach at Haad Rin, playing guitars to celebrate one of their birthdays, it’s now a ridiculous, festival-like party on the beach that pulls in around 30,000 people each month.

And although it might seem like a bit of a cliché, it’s a worth-while one. Dirt cheap buckets of booze fuel dancing and all-out debauchery until the early hours of dawn, all while wearing that very classic uniform of neon body paint.

Oh, nearly forgot, there’s also a Half Moon Party that happens when the moon is – yup, you guessed it – a half moon. This one happens in the forest, rather than on the beach, and some profess that it’s even better than the original. You know, one of those ‘back in the day’ arguments…

Our party hostel pick: they have a swimming pool… need we say more? Head straight over to Hard Road Hostel.

Book a hostel in Koh Phangan 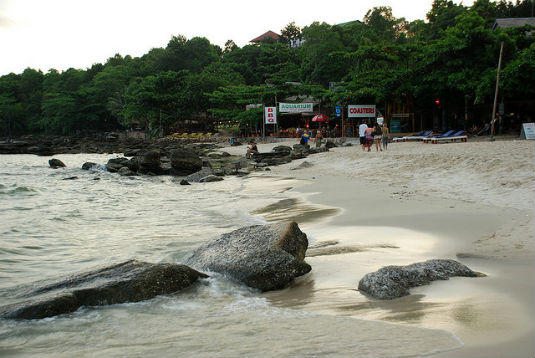 Enjoy your time in the sun, Koh Pangan, because not too far away another island is plotting to usurp your crown. This is Cambodia’s top party island where the drinks are cheap and the nights are raucous – and where the all new Full Moon Party resides (so get here quick before the crowds come). Hit up Serendipity and Occheuteal beaches for some great bars with some incredible views over that beautiful blue sea and beer it up in style.

Our party hostel pick: with a bar on the beach, cheap beers and eats, and an incredibly chill atmosphere, go for Everythang Guesthouse (perfect place to recharge after a raucous night on the tiles).

Book a hostel in Sihanoukville 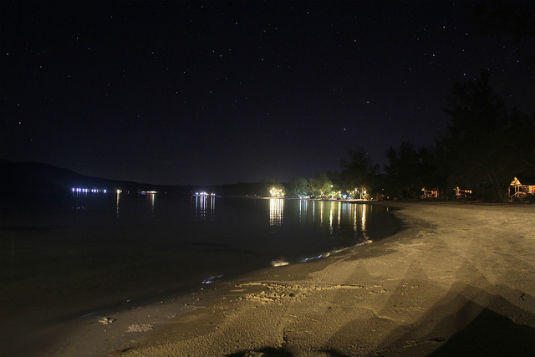 Now this really is the jewel in this list. If you want your party to have a tinge of the Robinson Crusoe to it, this is the one for you.

It’s not the craziest of parties and way more about the atmosphere. It’s still in the embryonic stage, where travellers have found a piece of paradise, tell others, and slowly they all congregate. Think beers on the beach round a fire (though there are the bars with their sound systems too). The real gem on this island; the glowing phytoplankton in that calm sea at night. Who needs neon lights when you have nature?

Oh, and get there fast, the multinational corporation Royal Group have plans to develop Koh Rong into a hellhole of rich boy timeshares and luxury resorts. See it as it is before it’s too late. Perhaps we do inevitably end up destroying the places we love…

Book a hostel in Koh Rong

What are your favourite party destinations in Asia? Tell us about them in the comments…

Thanks to Eulinky, jo.sau, jopetsy, Ronald Tagra, Ivetta Inaray, Neil Young, eric molina, Damien @ Flickr and Shiv for the excellent images off Flickr. Please note all were under Creative Commons license at time of publishing