Berlin is the party capital of Europe, famed for being a hedonistic wonderland of sex, drugs, and rockin’ techno. If you’re an LGBT traveller looking to let your hair down and have a good time, it’s hard to think of a place better suited than Berlin. The German capital has been considered a gay hotspot since the early 1900s, and Berlin’s LGBT nightlife continues to thrive.

My partner Natalie and I recently spent almost a week in Berlin. As a lesbian couple who’ve grown up in the UK, you’d think we’d be accustomed to liberal attitudes regarding our sexuality. However, Berlin’s tolerant and open-minded culture is on a whole other level. You come as you are in Berlin and nobody blinks an eye. A city that encourages your uniqueness and welcome diversity. Oh, we are so here for that. 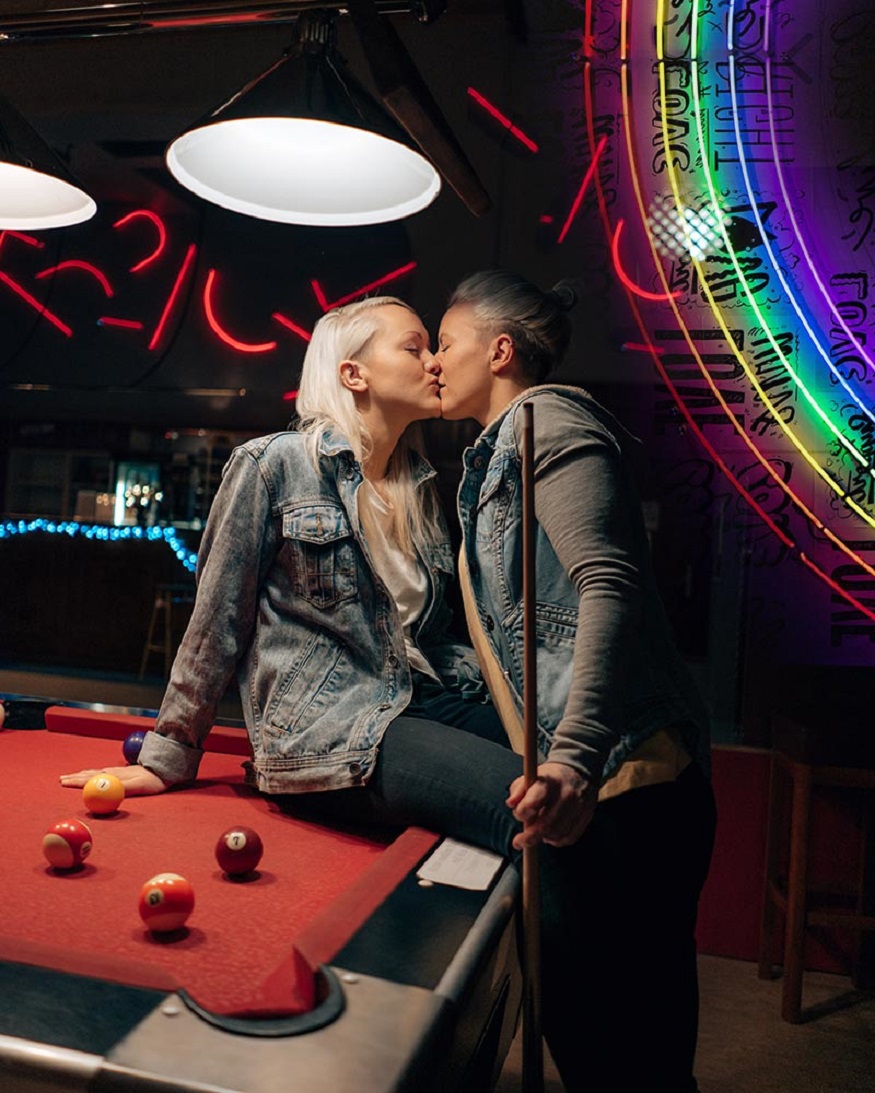 So what can you expect from LGBT Berlin? A no-holds-barred gay scene, that’s what. From pulsating techno clubs and kinky fetish bars, to trendy cocktail venues and steamy sex clubs, the Berlin gay scene has something for everybody. Ultimately, it’s a city where LGBT travellers can experience the true meaning of freedom.

In this article, I’ll be sharing the best of Berlin’s gay nightlife. From the original ‘gaybourhood’ of Schoneberg to the urban streets of Kreuzberg, I’ll be digging up the best gay bars, nightclubs and parties. Let’s get to it! 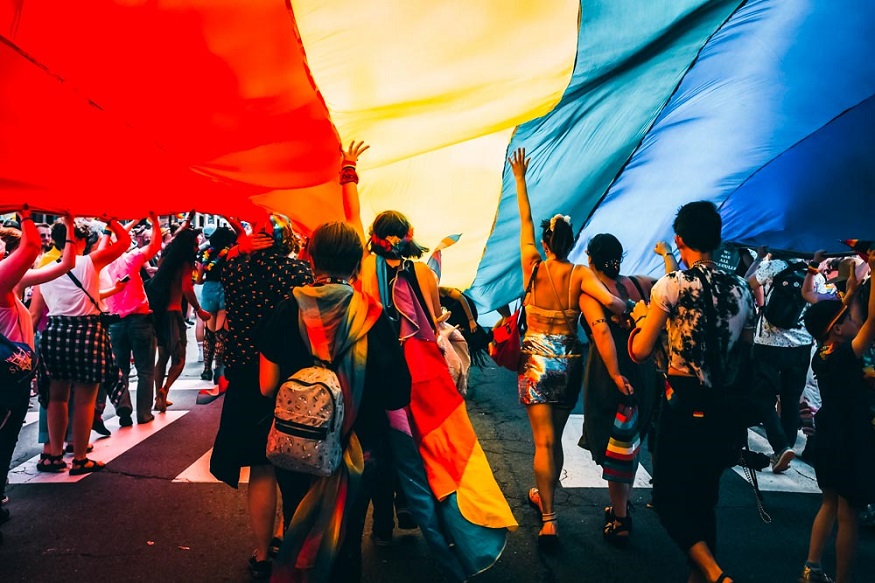 It’s no secret that Berlin is a city steeped in history and its LGBT scene is certainly no different. As I already pointed out, Berlin has been at the centre of LGBT culture since the early 1900s, when the city was the unofficial gay capital of Europe.

You see, Berlin has been a city of ‘firsts’ on the road to LGBT equality. The world’s first gay magazine Der Eigene was published here as early as 1896. In the 1920s, Berlin became the first city in the world to have a gay district, and Schoneberg went on to host the first-ever gay demonstration in 1922.

In recent years, several other gay districts have popped up around the city and sprinkles of the gay scene can be found everywhere. Yet, Schoneberg remains the beating heart of Berlin’s LGBT culture. It’s here you’ll find many gay bars, nightclubs, shops, cafes, and hotels. All the major LGBT events such as LGBT Park Festival and Berlin Gay Pride take place here. Jeez, if you visit in December, you’ll even find an LGBT Christmas market! 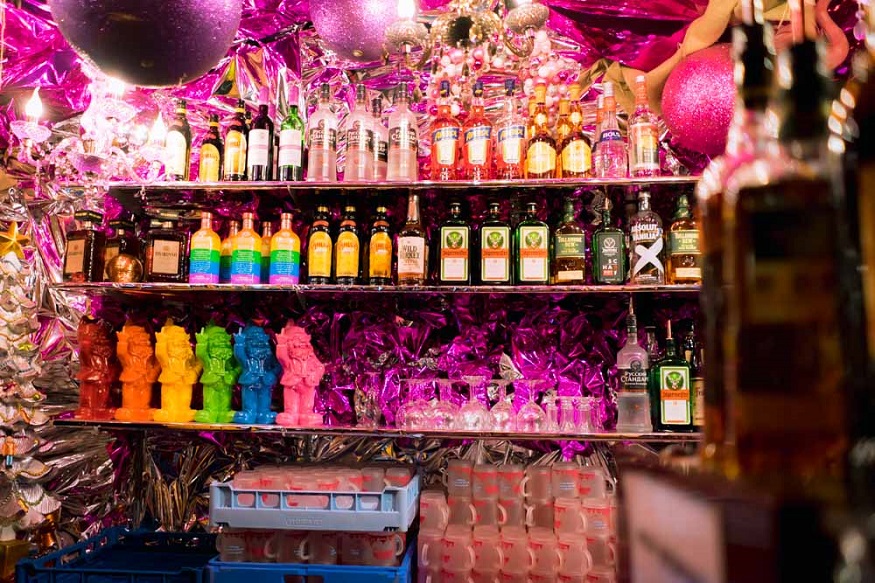 The best gay clubs in Berlin

Berghain is the most famous nightclub in Germany, notorious for its elusive door policies and 48-hour parties. It was once an exclusively gay nightclub, however these days it’s more of an ‘anybody who likes to party’ venue. But that’s not to say that a large percentage of the clientele aren’t still LGBT. Everybody who’s anybody wants a peek inside this enigmatic venue, often regarded as one of the best nightclubs in the world. If you can get past security, a realm of guilty pleasures and techno beats await in the dark depths of the former railway warehouse. 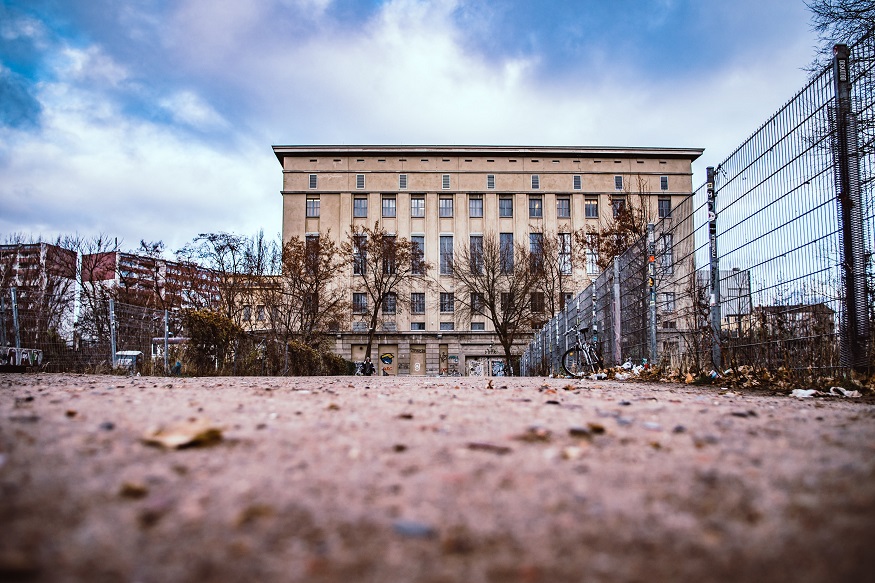 One of the clubs that appears on every gay Berliners must-visit list is Schwuz. Whereas other gay clubs in Berlin have a reputation of being pretentious, Schwuz is anything but, providing nothing but a safe and welcoming space for all. From what we can tell, the club is mostly frequented by young gay men looking to have a good time, however you will find your fair share of lesbians and allies depending on the night. 3 or 4 rooms play a variety of music, from cheesy club classics to heavier techno, so there’s a little bit of something for everybody.

Die Busche is one of the oldest gay establishments in Berlin. Before reunification, it was the only gay disco in East Germany and has remained somewhat of an institution in gay Berlin ever since. Today, the multi-floored LGBT nightclub attracts a diverse and fun-loving crowd, with every room playing a different genre of music. Regardless of your sexual orientation, good times are guaranteed. 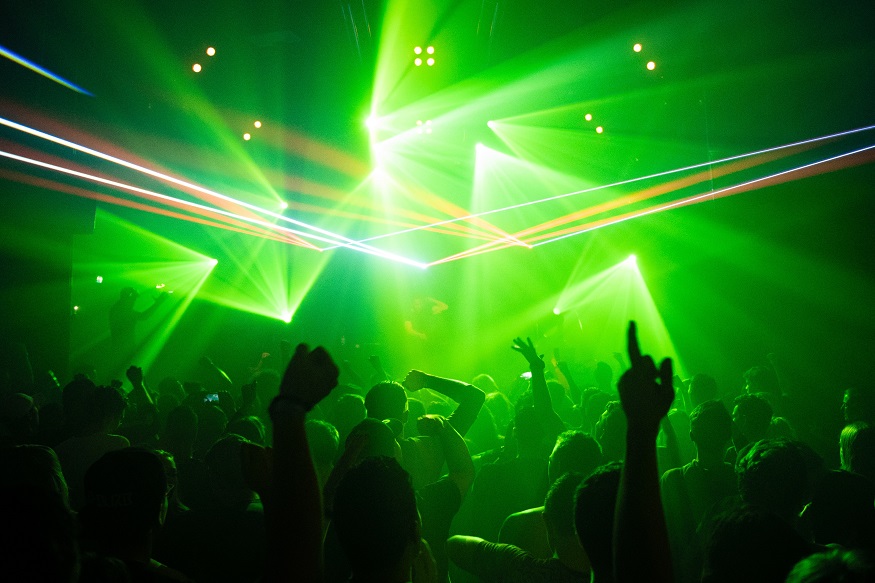 The best gay bars in Berlin

Tom’s Bar is another in a long line of Berlin institutions, famed for its ‘successful cruising’ motto and ‘anything goes’ crowd. World-famous among the gay community, you’ll find a mixture of both Berliners and travellers here. But be warned, most visitors are there for one thing only. So don’t be offended or surprised if you’re offered more than just a drink! If you’re travelling on a budget, you might want to visit on a Monday night when they offer a 2-4-1 drinks promotion. 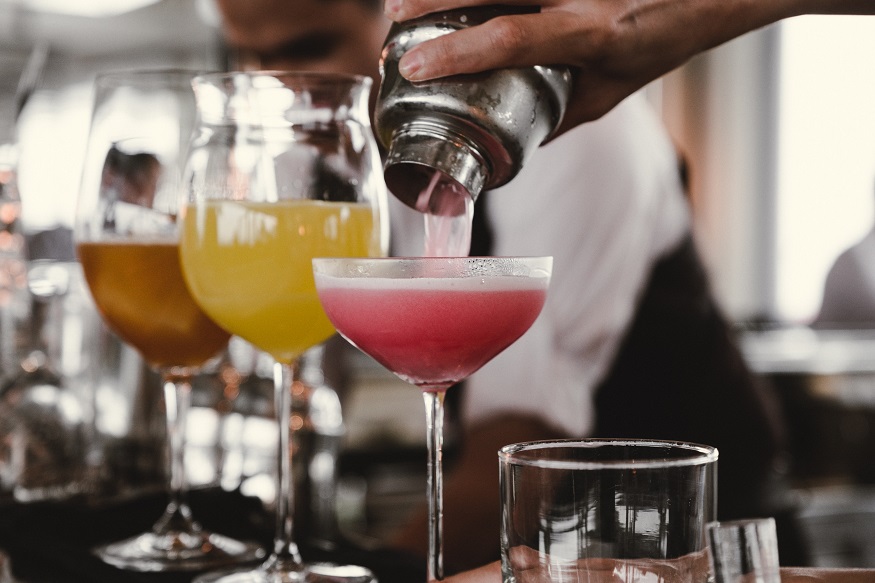 Coffee shop by day and cocktail bar by night, you can always expect good things when it comes to Blond. There aren’t many establishments that could pull off the mix of the two venues, but somehow Blond do it flawlessly. Everything from the owners and the guests to the overall ambience, are fun and welcoming. It’s just a zero attitude, carefree venue, and whether you’re stopping by for late brunch or an early mojito, I have no doubt you’ll have a wonderful experience. 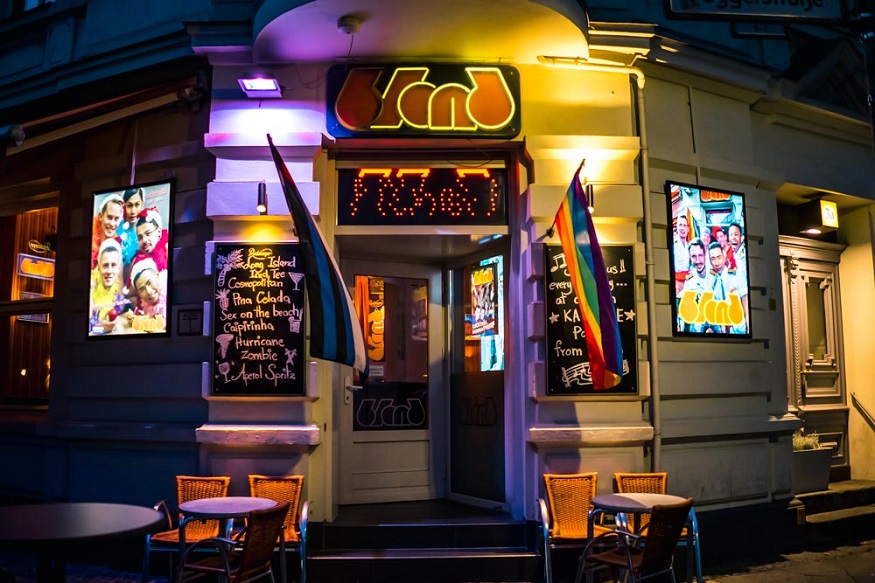 Mobel Olfe is our personal favourite gay bar in Berlin, thanks to its laidback hipster vibe and bohemian decor. Honestly, there’s nothing pink or sparkly in sight, and fresh indie rock beats have displaced the cheesy club anthems & thumping techno. The bar attracts a diverse, slightly alternative crowd who are out for a fun time. But without the smutty extras that accompany many of the gay bars in Berlin. 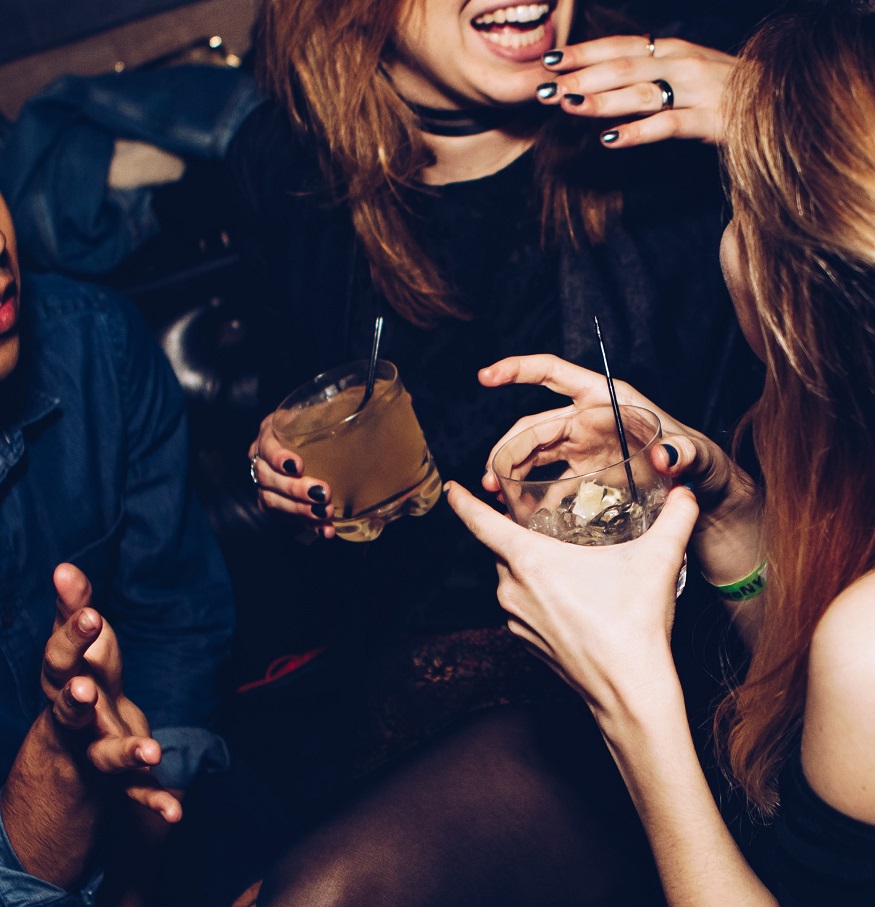 Another low-key gay bar in central Berlin, the Coven is making quite a name for itself as a chic cocktail venue and LGBT meeting place. Again, this bar won us over with its trendy industrial decor and relaxed vibe. It’s the ideal spot for quiet drinks between like-minded company, but without the over the top extras. Expect great craft cocktails, attractive clientele and a carefree ambience that’s rather infectious.

The best gay parties in Berlin

If the clubs and bars so far all sound a little too vanilla for you, perhaps you’ll be more interested in the debaucherous goings-on at KitKat Club. To be clear, this is a sex club in every sense of the word. Probably not ideal for the faint-hearted or the easily offended. You leave your clothes at the door, literally, and enter a world of lost inhibition, sexual freedom and heavy techno beats. If you’re curious, you don’t have to worry about being harassed for sex unless you want to. It’s all very regulated in that respect. But you are sure to see things that you’ll unlikely ever experience again in a nightclub environment.

While members of the LGBT community do go to the standard nights at Kit Kat, the exclusive gay men only night called Revolver Party is on once a month. See the website for exact dates so you can plan your trip around them.

If KitKat Club all sounds a bit much for you, you might enjoy the low-key GMF parties at House of Weekend instead. GMF is more of your stereotypical queen party, so you know to expect cheesy club classics, dashing drag queens and pounding energy from the young, party-loving crowd. Attend GMF at the exclusive Berlin club every Sunday night. Dress to impress and let the good times roll! 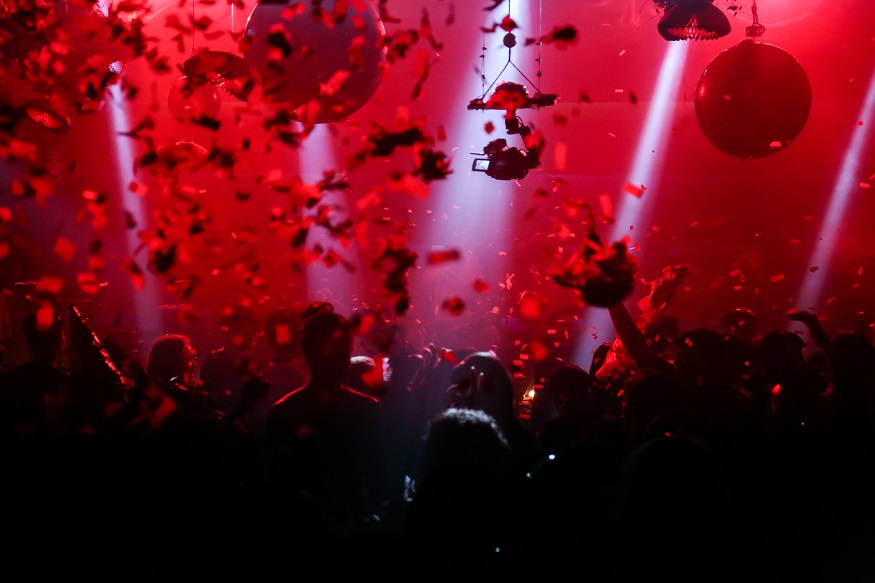 Girls, there’s no need to feel left out. While it might seem that a lot of Berlin’s gay nightlife is centred around the boys, there’s plenty of fun to be had for us as well. The biggest lesbian party in Berlin is Girlstown, a party organised by girls who love girls, for girls who love girls. Sounds great right? This epic event takes place at the iconic Gretchen Club on a bi-monthly basis, so keep an eye on their Facebook for the latest party dates.

One of the most popular gay parties in Berlin, Chantal’s House of Shame is a cult favourite among gays and straights alike. Every Thursday, the legendary host Chantal leads party-goers through an explosive evening of drag shows, live bands and world-class DJs. 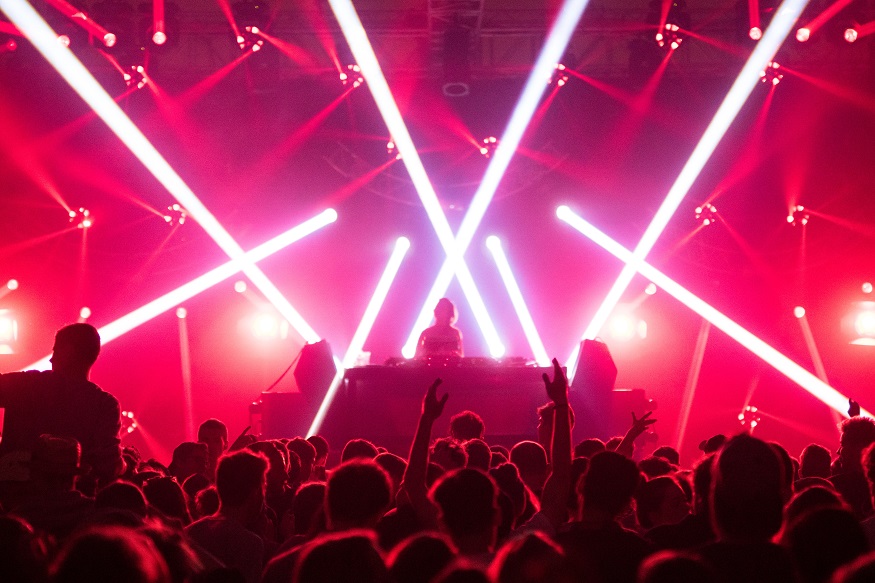 LGBT travellers needn’t worry about experiencing any discrimination when booking hostels in Berlin. For one, it’s illegal to discriminate against anybody due to their sexual orientation and the majority of Berliners adopt the same open-minded attitude. With this in mind, I’m making the following hostel recommendations based on their location, value for money and overall awesomeness instead.

Circus Hostel – There’s no shortage of unique accommodation in Berlin, and the quirky Circus Hostel is a backpacker favourite. Circus-and-comic book-themed decor adorns this vibrant and colourful hostel. If you’re planning a Berlin itinerary packed with sightseeing, the location is perfect. 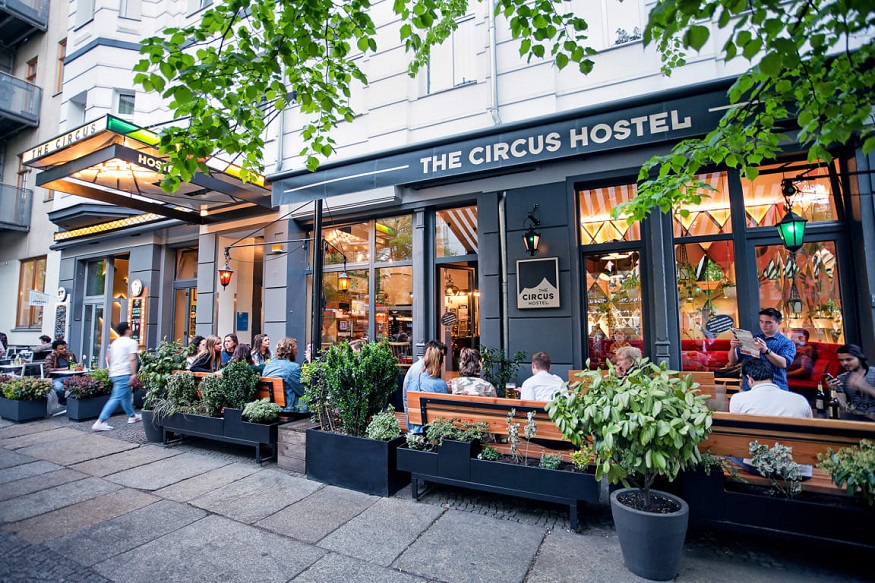 Charlotte and Natalie are the explorers and adventurers behind the LGBT+ & Adventure Travel Blog Our Taste For Life. You will often find them wandering off the beaten path, immersed in nature, or enjoying authentic cultural experiences. The rest of the time, you will find them eating.  Follow their journey on their blog or Instagram.

🌟 Where to stay in Berlin: a neighbourhood guide

🌟 The best hostels in Berlin