When you think of Munich, chances are the first thing that springs to mind is Oktoberfest, and all the lederhosen-wearing, beer-drinking fun that comes hand-in-hand with the world’s biggest beer festival. And that’s fine – Oktoberfest is pretty high on most travellers’ ‘to-do’ list. Having said that, there are many more things to do in Munich outside of what goes on in the beer halls. Although hardly a bargain location, there is a lot of free fun to be found in the capital of Bavaria. Here is a list of the best free things to do in Munich:

We love a good view, and getting up high can be useful to help you get your bearings in a new city. Work off some of that bratwurst by climbing up the 306 steps of St Peter’s Church, the oldest in Munich. The views of the city and its surrounding countryside are quite something, which is why we think it’s one of the most worthwhile free activities in Munich.
WHERE? Rindermarkt 1, 80331 München, Germany

Should you be knocking around the New Town Hall around 11am, you can take in the Rathaus Glockenspiel, one of Munich’s best free attractions. As the clock strikes the hour, out twirl life-sized figures that act out tales from the 16th Century in time with the chiming of the clock.
WHERE? Marienplatz 8, 80331 München, Germany 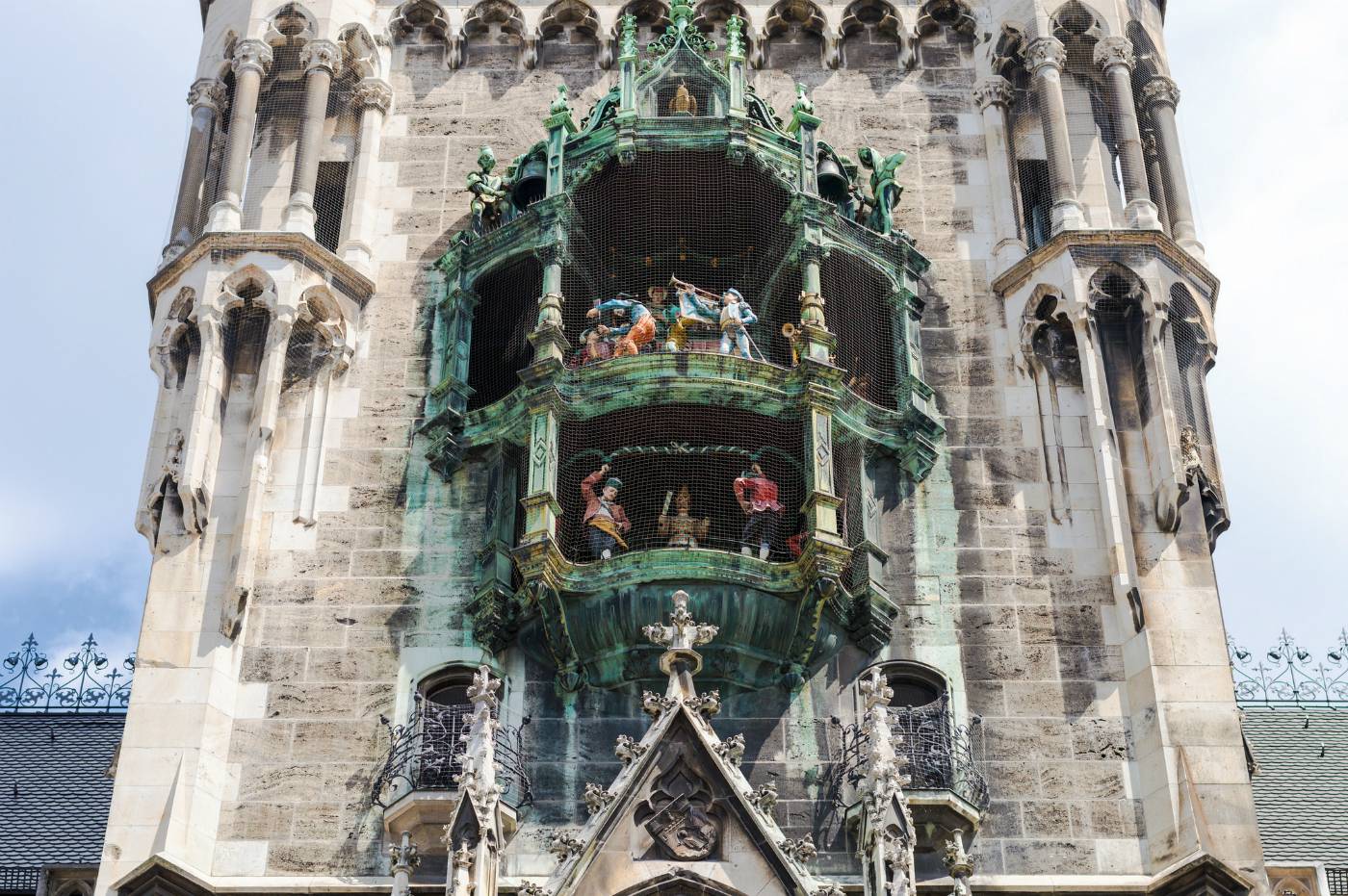 This next free Munich activity will require a little nerve, and a lot of skill. Only those with the necessary credentials should try their hand at surfing the city’s famous “standing wave” in the Eisbach, a 2km creek that runs through the Englischer Garten. When the sun is shining, the crowds come out, so expect to queue. There is a smaller and less busy wave to the south of Munich at the Floßlände, but this is only suitable for surfing during rafting season, which runs from May until September.
WHERE? The southern tip of the Englischer Garten at Prinzregentenstrasse. Bus 100 stops nearby. 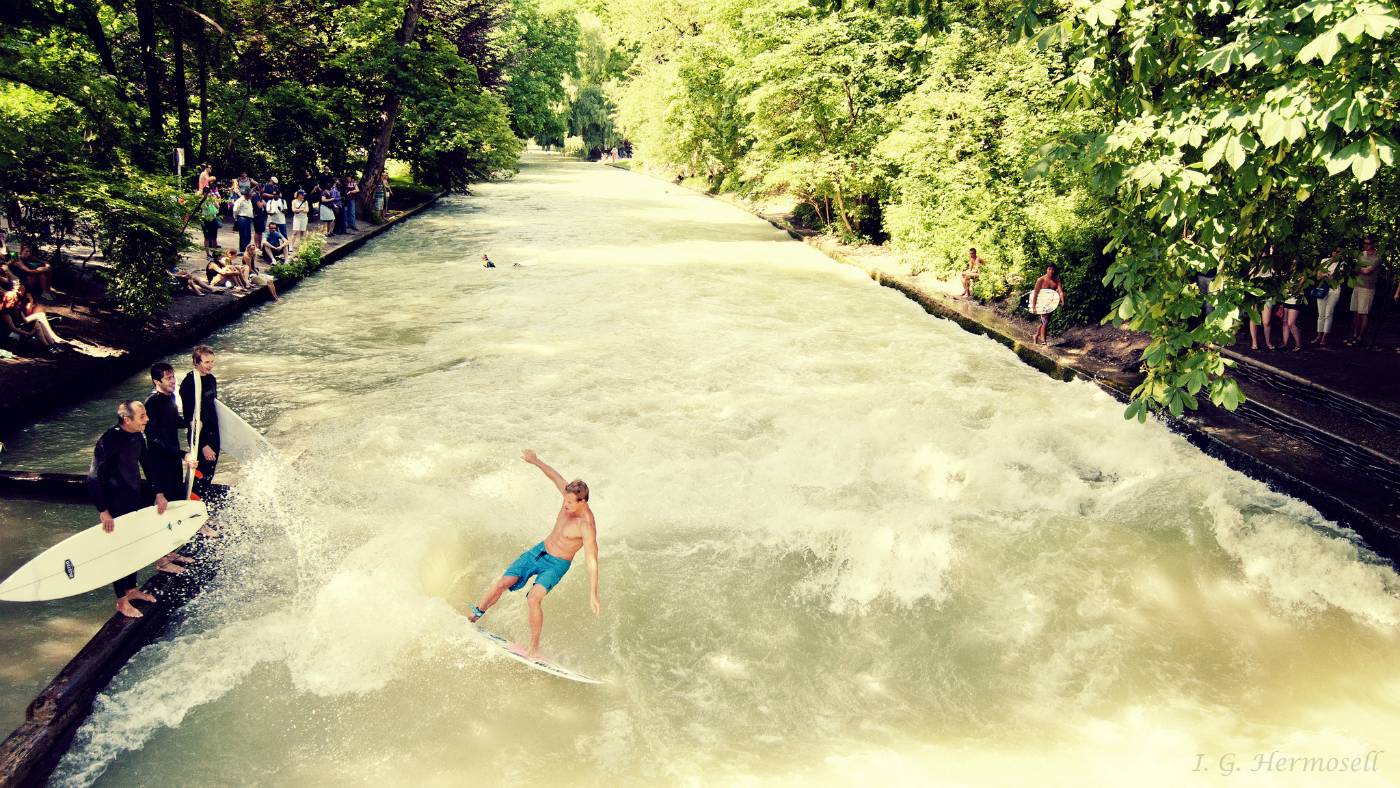 Munich is home to numerous swanky rooftop bars but prices can err on the astronomical side. We recommend doing as the locals do – popping to the shop to stock up with some cold ones and then heading to Hackerbrückensundowner, a bridge close to Munich Central Station, which is a great place to watch the sunset.

Who would have thought that Munich would have a park larger than Hyde Park in London, and Central Park in New York? Well, they do, and in the Englischer Garten there’s lots of free fun to be had. If you’re in town in summer, the park’s manicured lawns are perfect for lounging. Should you tire of sunbathing, head to the Japanese teahouse, or the Chinese Tower, where you’ll also find the biggest of several open-air beer gardens located within the park. They’re completely free to hang out in and you’re even allowed to bring your own picnic (though you should probably buy at least one stein of beer if you can stretch to it).
WHERE? Catch the U-Bahn and hop off at Giselastrasse. 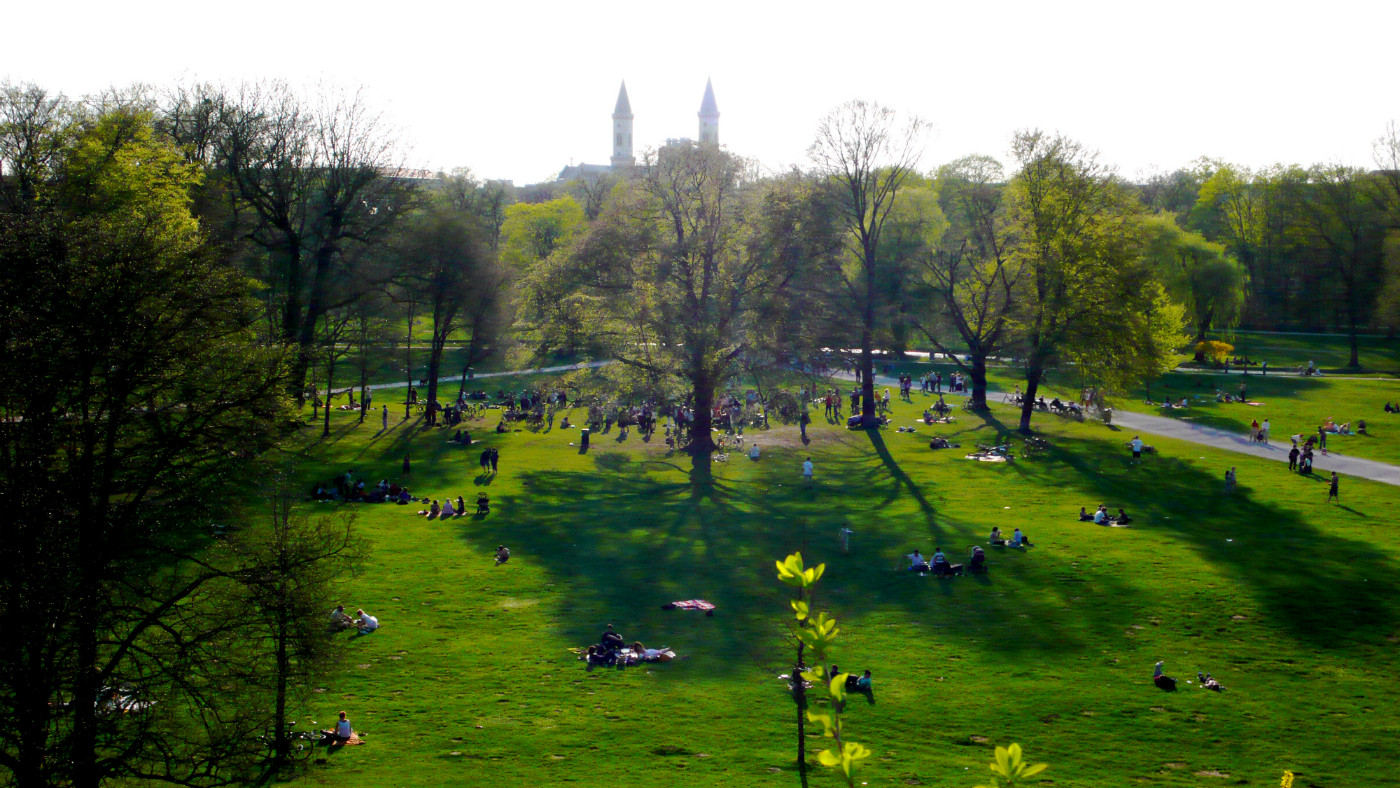 When temperatures soar, Münchners don’t just grin and bear it – they dive in the Eisbach, and float through the Englischer Garten to cool off. You can hop back on the tram to the start for free too as long as you’re in your swimmers! Isar Schlauchboot is another option for river fun that’s far longer, and best navigated aboard a dingy or in a rubber ring. It’s worth noting that this activity is getting incredibly popular and as a result there has been a rise in litter and accidents. If you decide to go a’floatin’, don’t get too hammered, and take your rubbish home with you. Let’s show Mother Nature some love!

A Spot of Culture

Although not quite free, many of Munich’s best museums only charge €1 on Sundays, and that’s a bargain we want to shout about. Check out the works of Rembrandt, Monet and Warhol at the Pinakothek Galleries, or the Renaissance sculptures at the Bayerisches Nationalmuseum.
WHERE? Take Bus 100 to Reitmorstrasse for the Pinakothek Galleries. Bayerisches Nationalmuseum is at Prinzregentenstraße 3, 80538 München.
Tuesday to Sunday 10 am to 5 pm
Thursdays 10 am to 8 pm
Closed Mondays 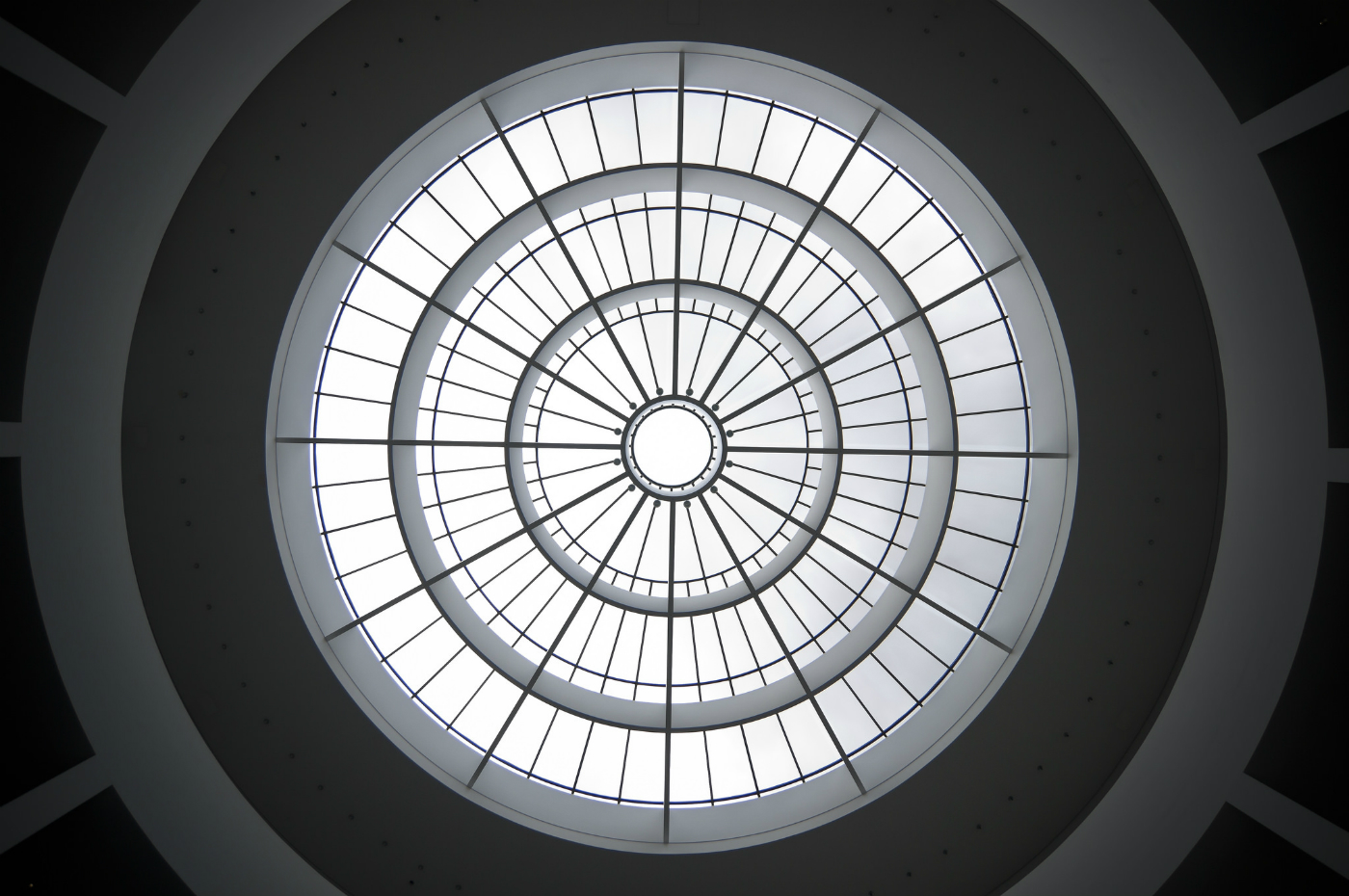 For free competitive fun, head to pretty much any park in Munich and you’ll find open-air ping-pong tables. Another option is to recruit some friends to join you at the Hofgarten for a friendly game of boules.
WHERE? Hofgartenstraße 1, 80538 München, Germany

Check Out Your Future Car

If you love nothing more than admiring the slick lines of snazzy cars, you’ll be delighted to hear that the BMW flagship store is completely free to visit. Should you fancy one of the revolving exhibitions, you may have to pay a small fee.
WHERE? Am Olympiapark 1, 80809 München
Building:
Monday – Saturday – 07:30-Midnight
Sunday – 09:00-Midnight
Exhibition:
Monday – Sunday: 09:00–18:00 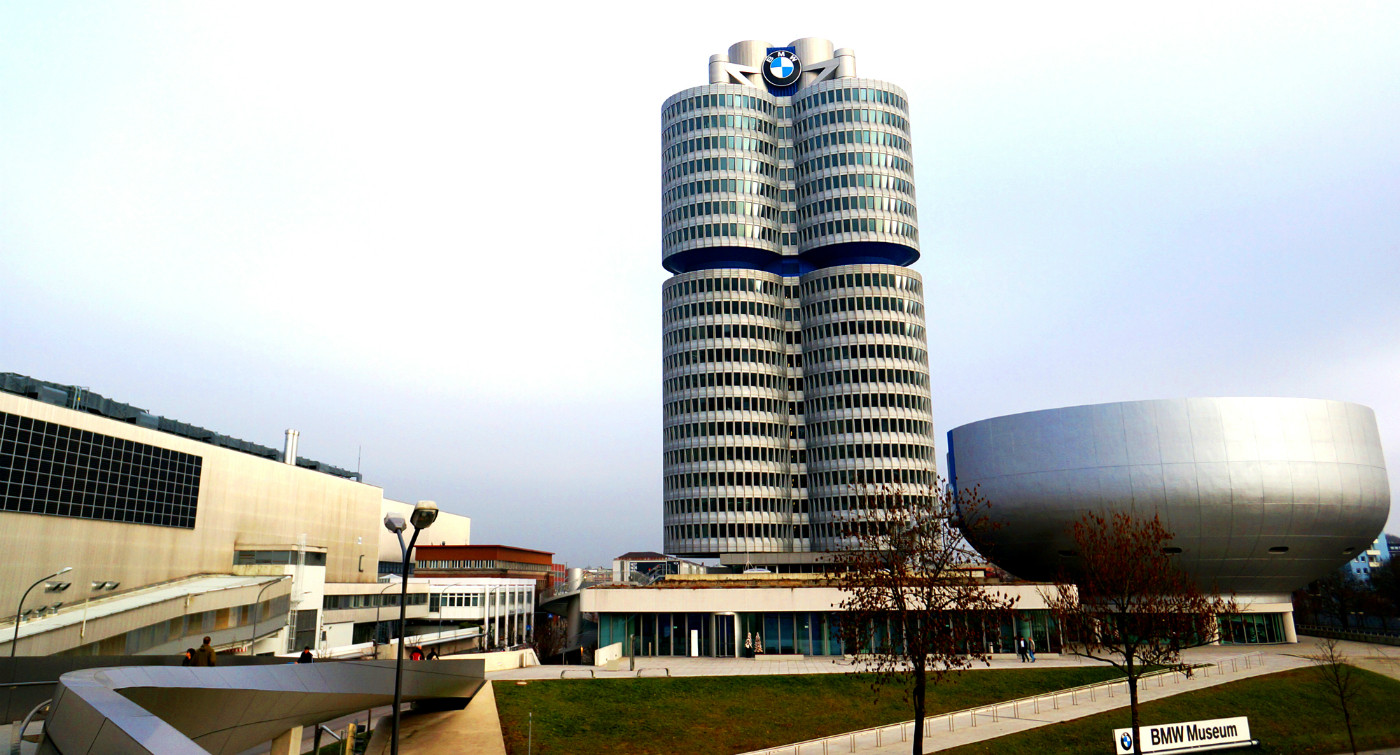 Music to Our Ears

Every summer Munich hosts a great range of concerts at Odeonsplatz, close to Hofgarten. You’ll have to pay if you want a seat, but if you’re happy to enjoy the music from a safe distance, you can reap the benefits of the concert without spending a penny. Another fantastic free choice for some music is Kulturzentrum Gasteig where there are free lunchtime and early evening concerts held daily starring the students from the nearby Academy of Music and Theatre.
WHERE? Take any S-Bahn to Rosenheimer Platz.

Let’s be honest, tickets to an FC Bayern München match could see that budget obliterated in seconds. However, you don’t have the shell out a fortune to see Germany’s best demonstrating their dribbling prowess. The public can attend training sessions numerous times a week completely free of charge.
WHERE? Bayern München’s team headquarters are on Säbener Strasse, about 6km south of the city centre. The nearest U-Bahn station is Mangfallsplatz
Check the website for the schedule. 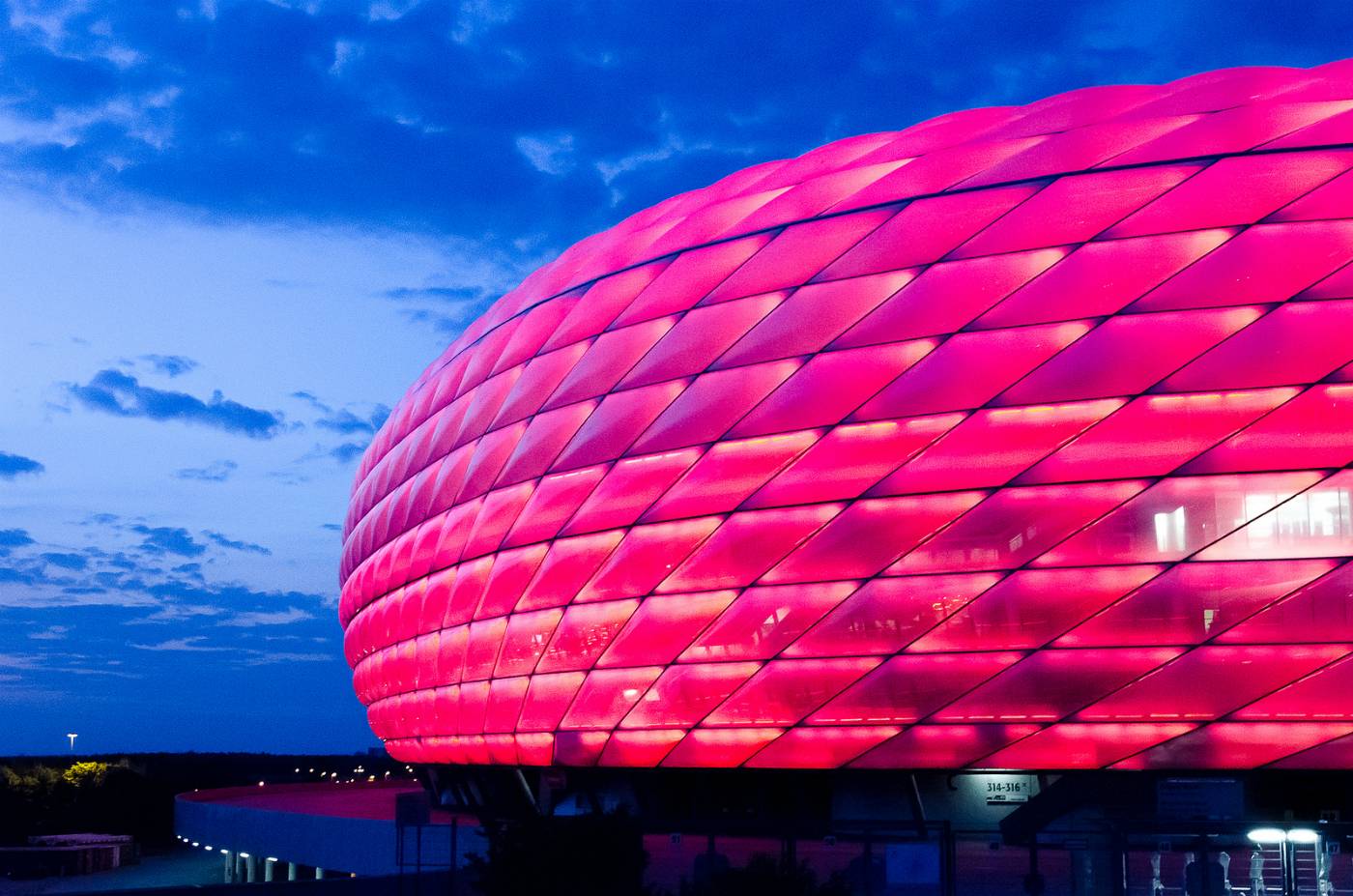