The Italian island of Sicily and the island country of Malta are underrated Mediterranean spots that have been catching media attention WORLDWIDE. From Sicily being the location of the latest season of The White Lotus to Malta being in Jurassic World Dominion and Below Deck Mediterranean. Both are beautifully rugged with pristine beaches and historic cobblestoned towns that are nothing but spectacular.

Sicily and Malta are great for backpackers because they are budget-friendly compared to other Mediterranean destinations and are super close to each other (no wasting half a day in an airport). This article will help you plan the ultimate 2-week Mediterranean getaway and find out where to go in Sicily and Malta.

Sicily is located on the southern tip of Italy and is the largest island in the Mediterranean. Believed to be inhabited since 12,000 BC, this island boasts diverse landscapes and rich culture that is a result of a mish-mash of ethnic groups. Its colourful traditions are seen through its ancient towns, century-old markets, and passionate locals. The island is also the birthplace of arancini, a fried rice ball that is an Italian delicacy and a must-try at any bakery. Sicily offers authentic Italian charm without the overwhelming crowds of Italy’s mainland.

Malta sits between Sicily and the northern African coast. The country consists of three islands, the main island, Malta, and two smaller ones, Gozo and Comino. It has a fascinating history dating back to 5200 BC with its culture being influenced by the Phoenicians, Romans, and Arabs. The country is known for welcoming locals, baroque architecture, and archaeological sites that includes seven megalithic temples. As a haven for dreamy beaches and idyllic coastal views, Malta is unmatched for snorkelling and sunbathing – especially since it has some of the hottest temperatures in Europe!

Palermo is Sicily’s lively capital city that is full of Sicilian culture. It is not an overly clean place, but don’t let this discourage you from visiting! The ancient architecture is stunning, locals are welcoming, and the markets are on a whole other level. If you want a break from the city streets, nearby beaches can be reached by bus.

Palermo really comes alive during the night, especially at the historical Vucciria market, a party hotspot for both locals and travellers. Palermo Airport is not far from the city centre, making it easy (and affordable) to reach with public transportation and shared taxi options.

Things to do in Palermo 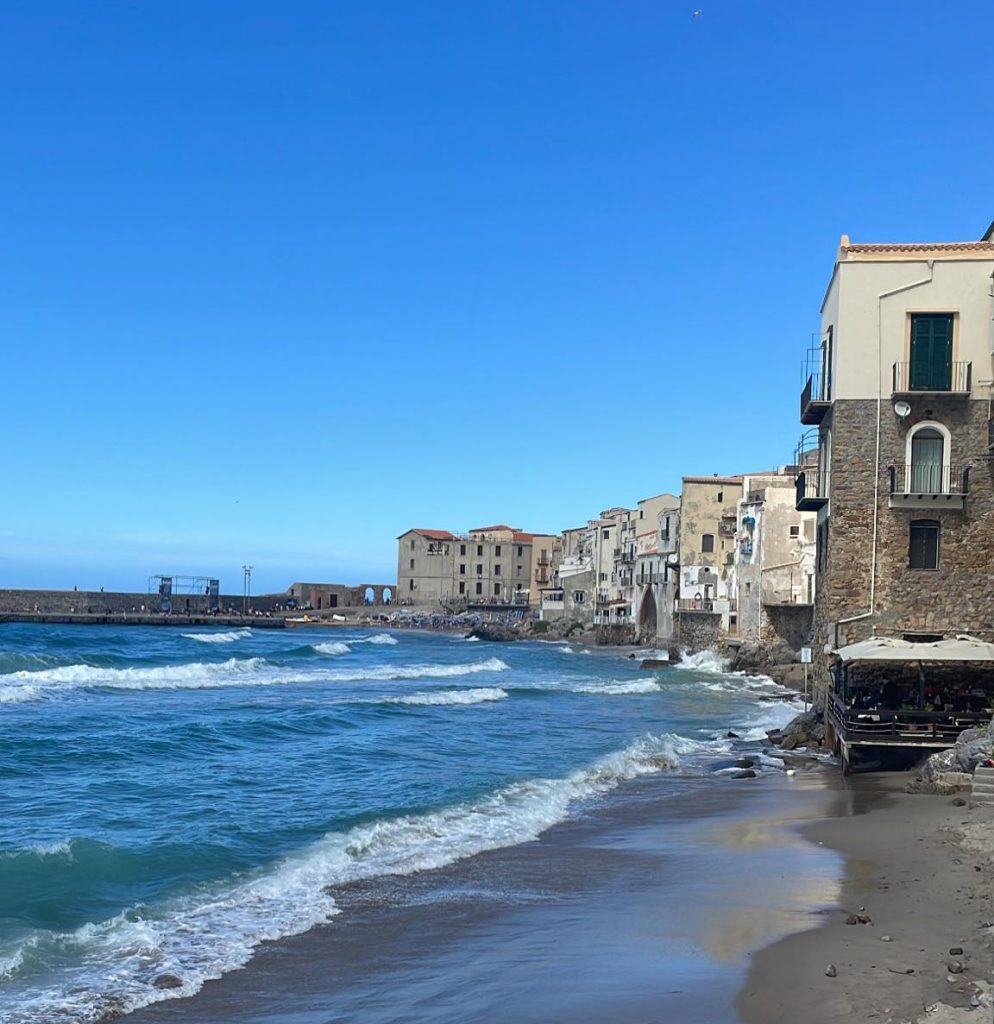 50 minutes from Palermo via train is the town of Cefalù. Seaside and irresistibly charming, Cefalù has quaint restaurants and a picturesque medieval old town with a Norman cathedral. Cefalù is popular with travellers so you can expect to find lots of gelato and souvenir shops around. If you want to lounge at Cefalù Beach (one of the best beaches in Sicily), arrive early to secure a spot as it becomes crowded since the beach is very narrow.

Things to do in Cefalù 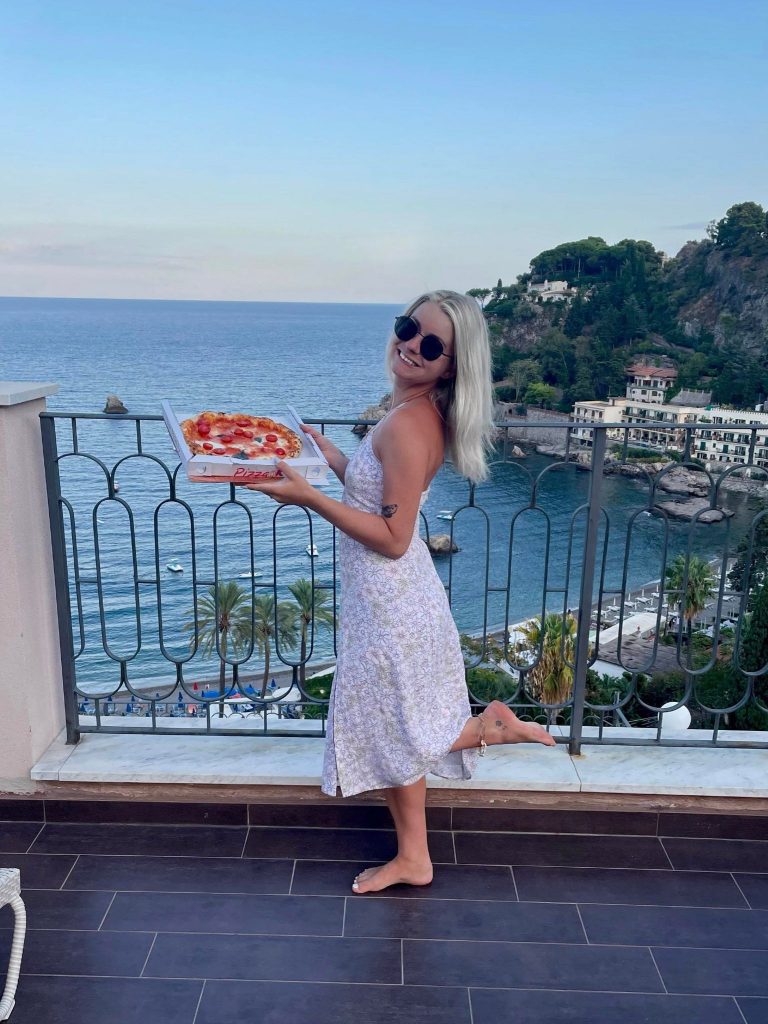 The hilltop town of Taormina can be reached by train from Cefalù within four hours. Taormina is breathtakingly magical and has everything you want in a Mediterranean destination with turquoise water beaches, an elegant old town, and breathtaking coastal views – it was even a filming location for season two of The White Lotus. Like Cefalù, Taormina is a popular area that is slightly more high-end, yet still budget-friendly.

It’s worth noting the distance from the town to the beaches. The town sits on top of a cliff, and to get down to the beach you’ll need to take a bus or the cable car. To save money and time, try spending the day oceanside and the evenings dining and exploring the town.

Things to do in Taormina

The city of Catania is a quick 50-minute train ride east of Taormina and sits at the bottom of Mount Etna, an active volcano. It is not as touristy compared to Palermo and is where you’ll find one of Sicily’s main airports, making it a quick and typically cheap way to fly to nearby Malta. If you have time before your flight, this ancient port city is worth exploring, or if you’re up for an adventure, you can hike to Mount Etna’s summit.

Things to do in Catania

Sitting on Malta’s east coast is St. Julian’s, an urban town that was once a small fishing village. Home to the island’s nightlife district, Paceville, and the cute Spinola Bay, St. Julian’s is a busy traveller hotspot for both day and night time fun. The town is around a 25-minute car ride from the Malta airport, with a shared shuttle being the cheapest and most convenient mode of transportation.

I suggest staying in St. Julian’s for your entire vacation and taking day trips to other towns on the island, as it is centrally located and not as pricy as other areas. If you want a super social and party environment, the Marco Polo Hostel is a fun option in Paceville. However, if you’re into more of a chill vibe, Inhawi Hostel is in a beautiful building with a pool, steps from Balluta Bay Beach.

Things to do in St. Julian’s 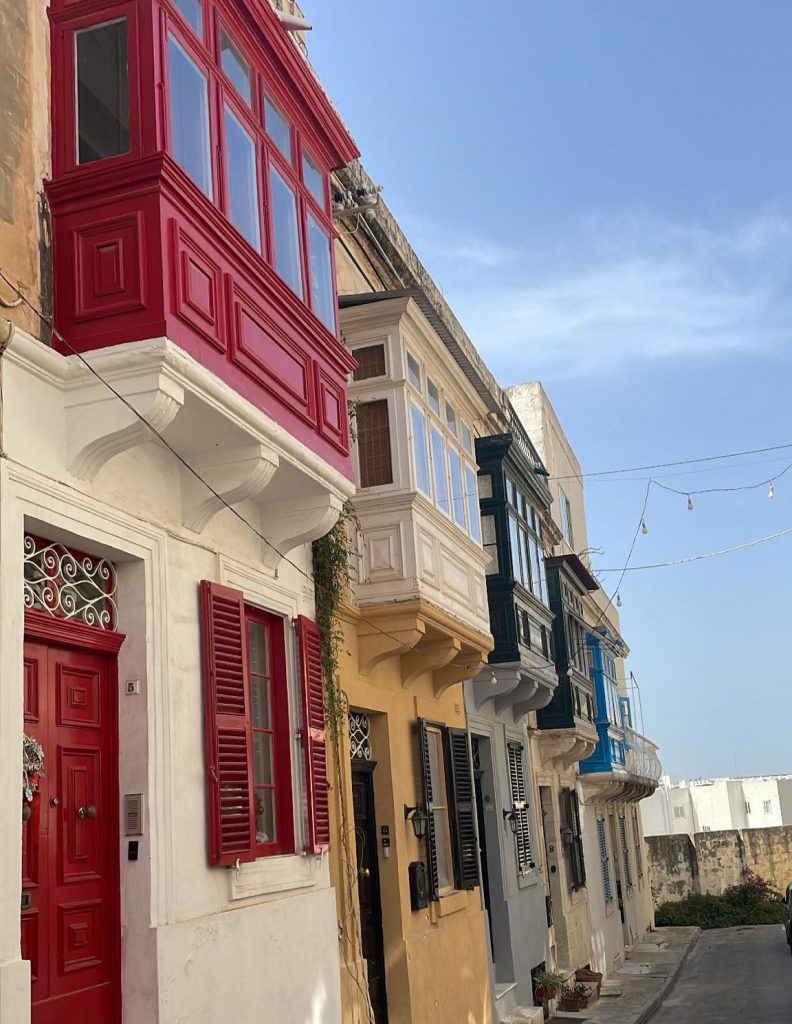 Sliema, the town next to St. Julian’s is just a 30-minute scenic walk away. With a lovely promenade, hidden alleyways, and streets lined with colourful balconies, Sliema is an affluent and aesthetically pleasing town. Along the promenade, there are places to jump in the water with well-marked areas for swimming, however, expect to find only rocky beaches here. Sliema also boasts plenty of restaurants and shops in addition to a watchtower built in 1657.

Things to do in Sliema

Malta’s capital, Valletta, is a World Heritage City that was founded in 1566. Famed for grand baroque architecture, an impressive natural harbour, and charming cobblestone streets – it’s hard not to fall in love with Valletta and its display of Maltese culture. The city is across the harbour from Sliema, so an easy way to reach Valletta is to take a ferry from Sliema for only a few euros. Because of Valletta’s extensive history, consider taking a walking tour to learn about its heritage.

Things to do in Valletta 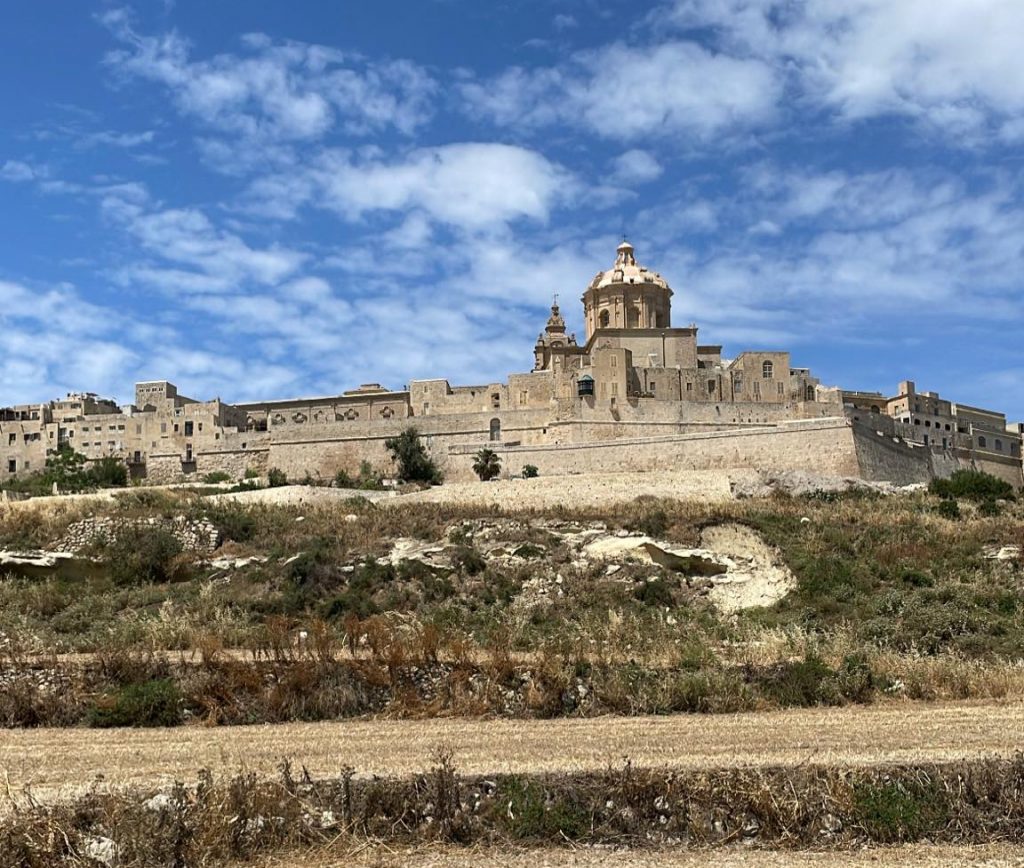 Inland near the centre of Malta is the tiny medieval city of Mdina. With an atmosphere that looks and feels straight out of a fairy tale, Mdina’s fortified walls are lined with baroque palaces where noble Maltese families once lived. Today, the city is a tourist destination with around 300 residents and has unreal views of surrounding fields. Mdina is well-preserved and served as a filming location for scenes in Game of Thrones, Gladiator, and Troy.

Reaching Mdina can be tricky from the east coast, but is doable via public bus. Another option is to buy a day pass for the double-decker hop-on hop-off tour bus that stops at popular sites. Although more expensive than the public bus (approx. 20 euros), the hop-on hop-off bus is more efficient and reliable.

Things to do in Mdina

Malta’s northern coast is where you can find fantastic natural sites, with the Blue Lagoon being the most famous. Just off the coast of Comino Island, The Blue Lagoon is pure paradise thanks to crystal-clear waters and perfect swimming conditions. The lagoon is small and gets crowded quickly early in the day. Although it’s remote, getting there is easy. Many tour companies offer boat trips to the lagoon from various harbours, including Sliema, at reasonable prices. The bigger the boat, the less you’ll pay!

Things to do at the Blue Lagoon

We hope this itinerary will help you plan the ultimate two-week trip to Sicily and Malta. Be sure to let us know in the comments if you have any tips for visiting these places and if there are other spots in these areas that travellers shouldn’t miss! Cheers! 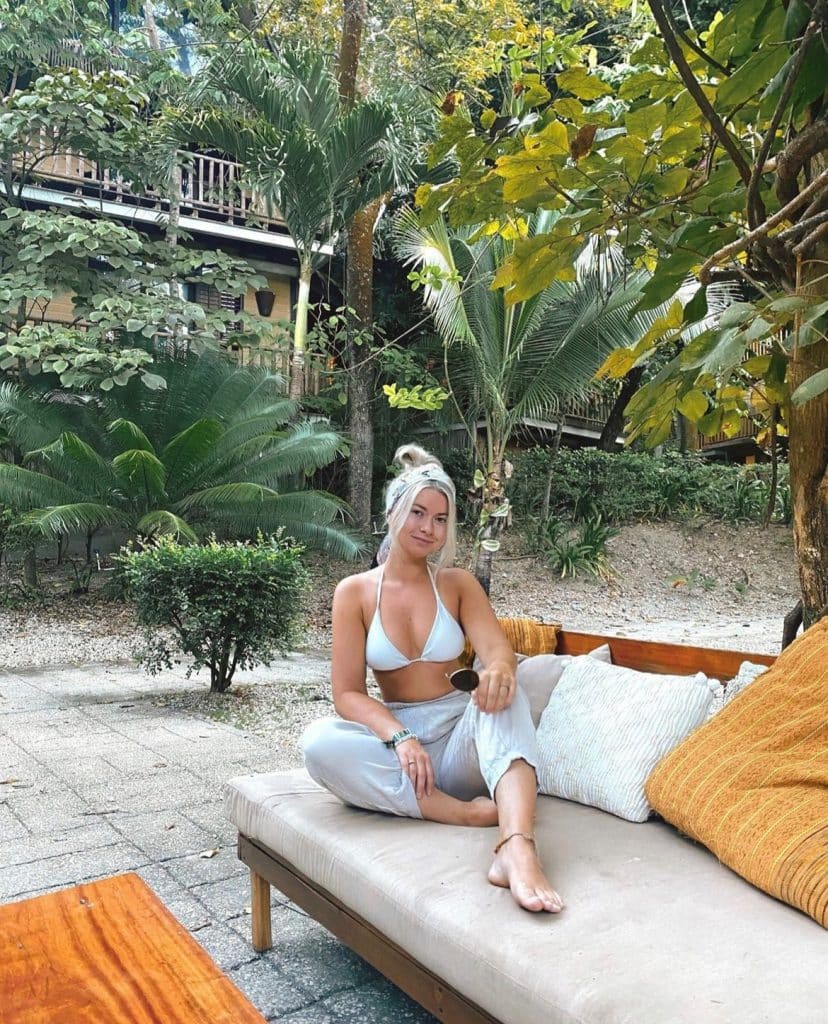 Cortney is a freelance writer and digital nomad from the East Coast of Canada. She prefers to travel without a plan and believes some of the best experiences come from spontaneous decisions.