Everybody knows that London has some of the best museums in the world, but did you also know that most of them are completely *FREE* to visit? Whether you’re obsessed with dinosaurs, or have a thing for quirky chamber pots, this city is overflowing with extraordinary exhibits just waiting to be explored.

Here’s our pick of the biggest, best and most unusual free museums in London. 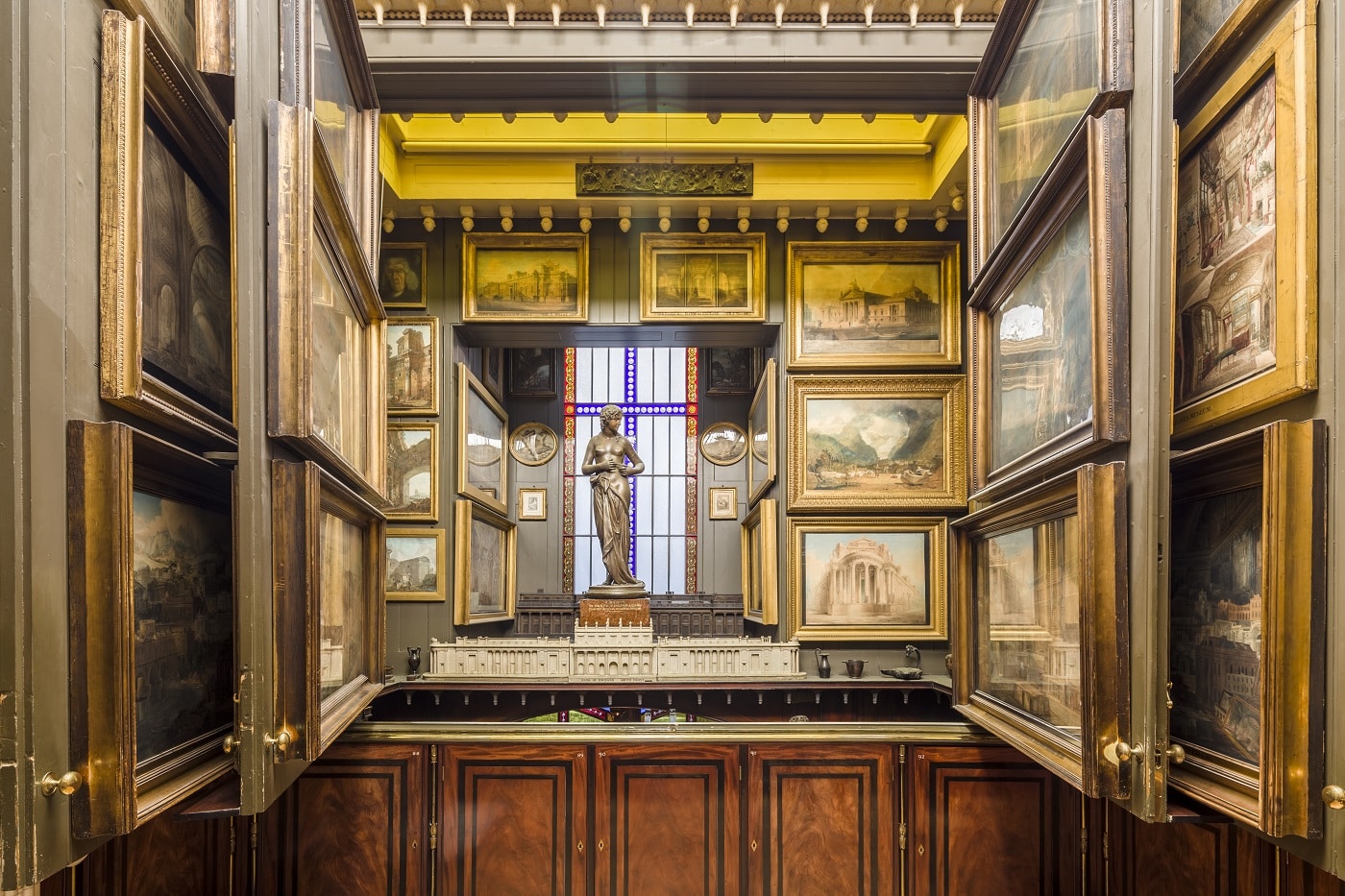 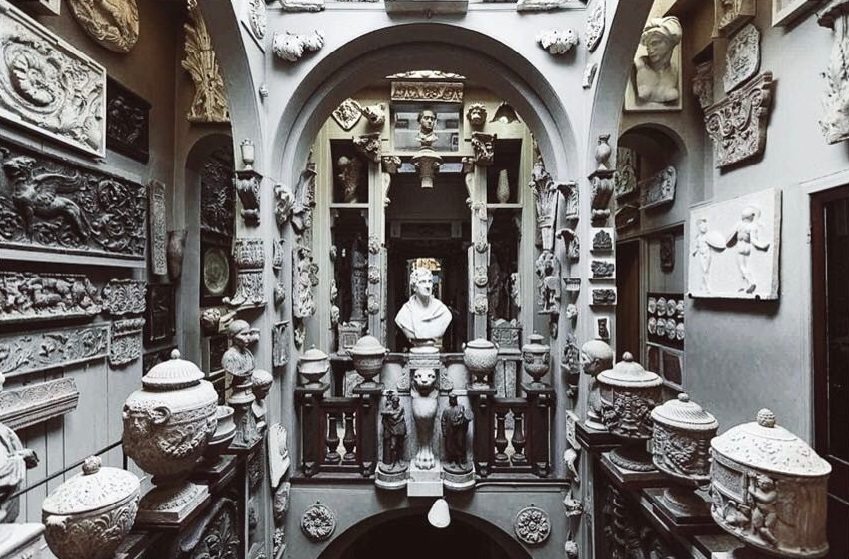 Chances are, you’ve probably never heard of this incredible place – even if you live in London. Dedicated to famous London architect Sir John Soane, what makes the museum so special is the contrast between the intimate town house setting and its grand exhibits worthy of the British Museum: sculpture, antiquities, architectural drawings, paintings from the likes of Hogarth and Turner…

The labyrinthine building, designed and inhabited by Soane until his death, is packed to the rafters with treasures and the effect is both claustrophobic and enchanting. Keep an eye out for eccentric details such as the cell for Soane’s imaginary monk, the alabaster sarcophagus in the basement and the ingenious wall extensions (pictured above) he used to display his paintings when he ran out of space. 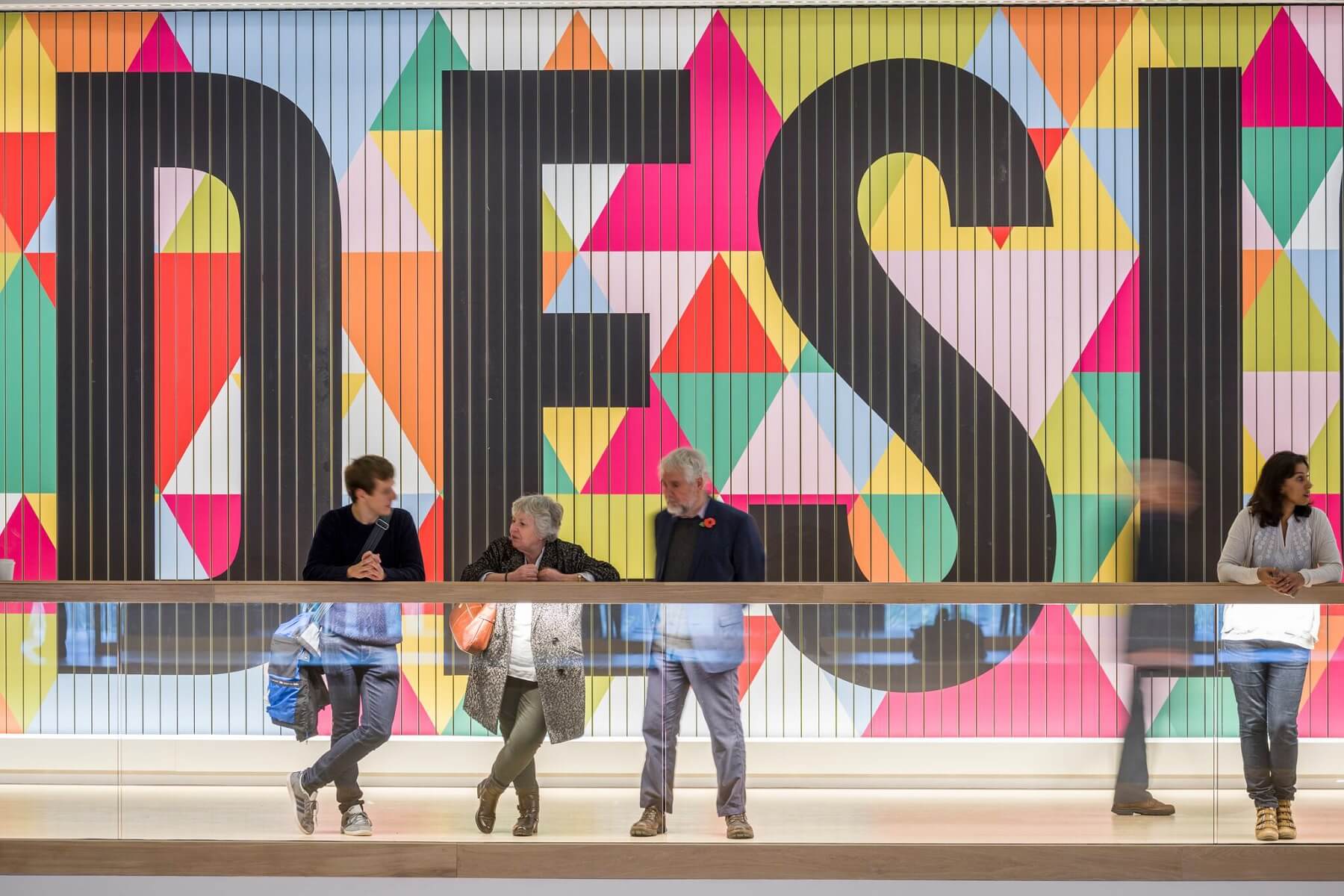 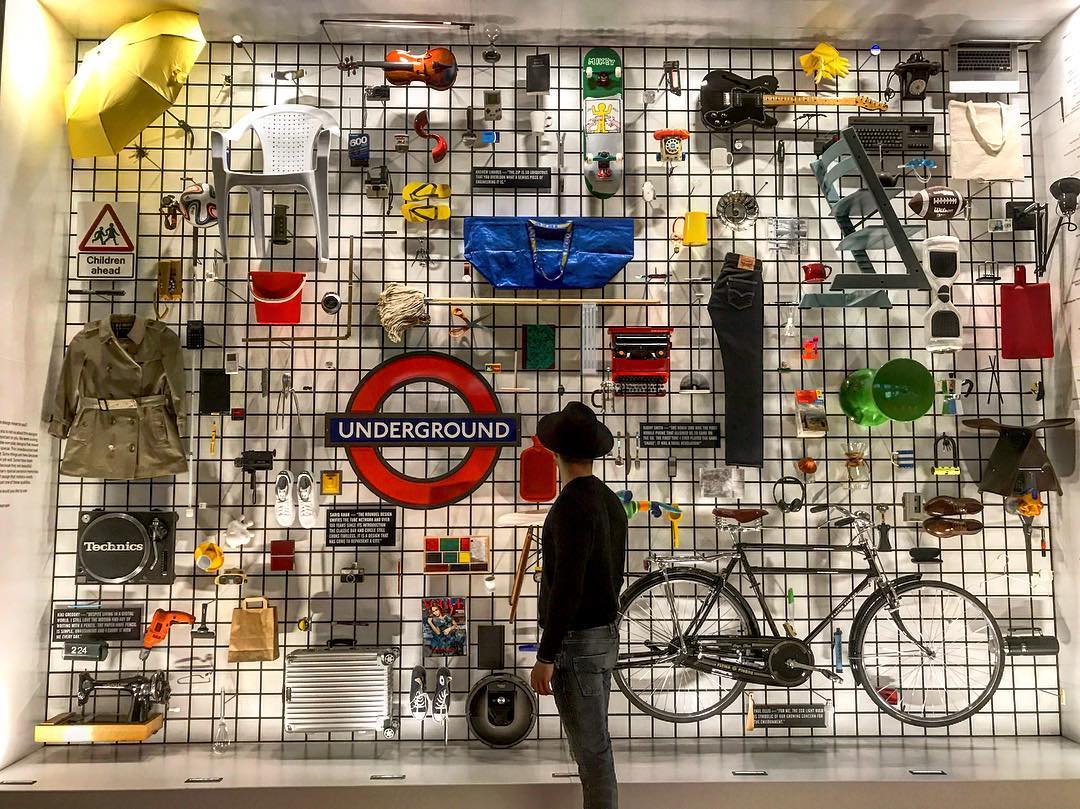 This place is a design classic in its own right, and has quickly become one of the best free museums in London since its reopening at the end of last year. The permanent exhibition, titled ‘Designer Maker User’, will help you appreciate the beauty in even the most everyday objects such as thermos flasks, Xbox consoles and clocks.

The museum’s imposing new home next to Holland Park in Kensington is just a stone’s throw from the V&A, Natural History and Science Museums. 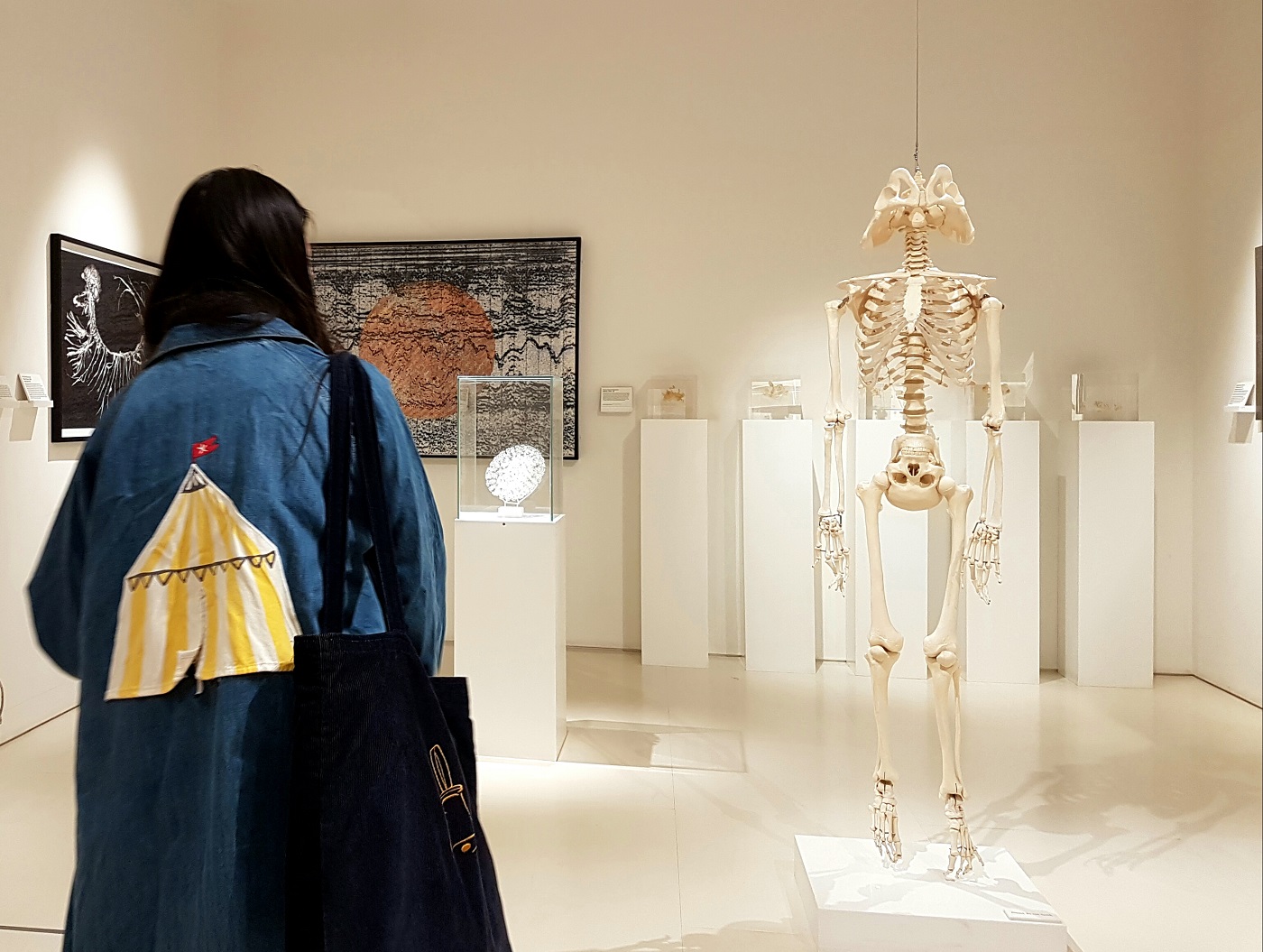 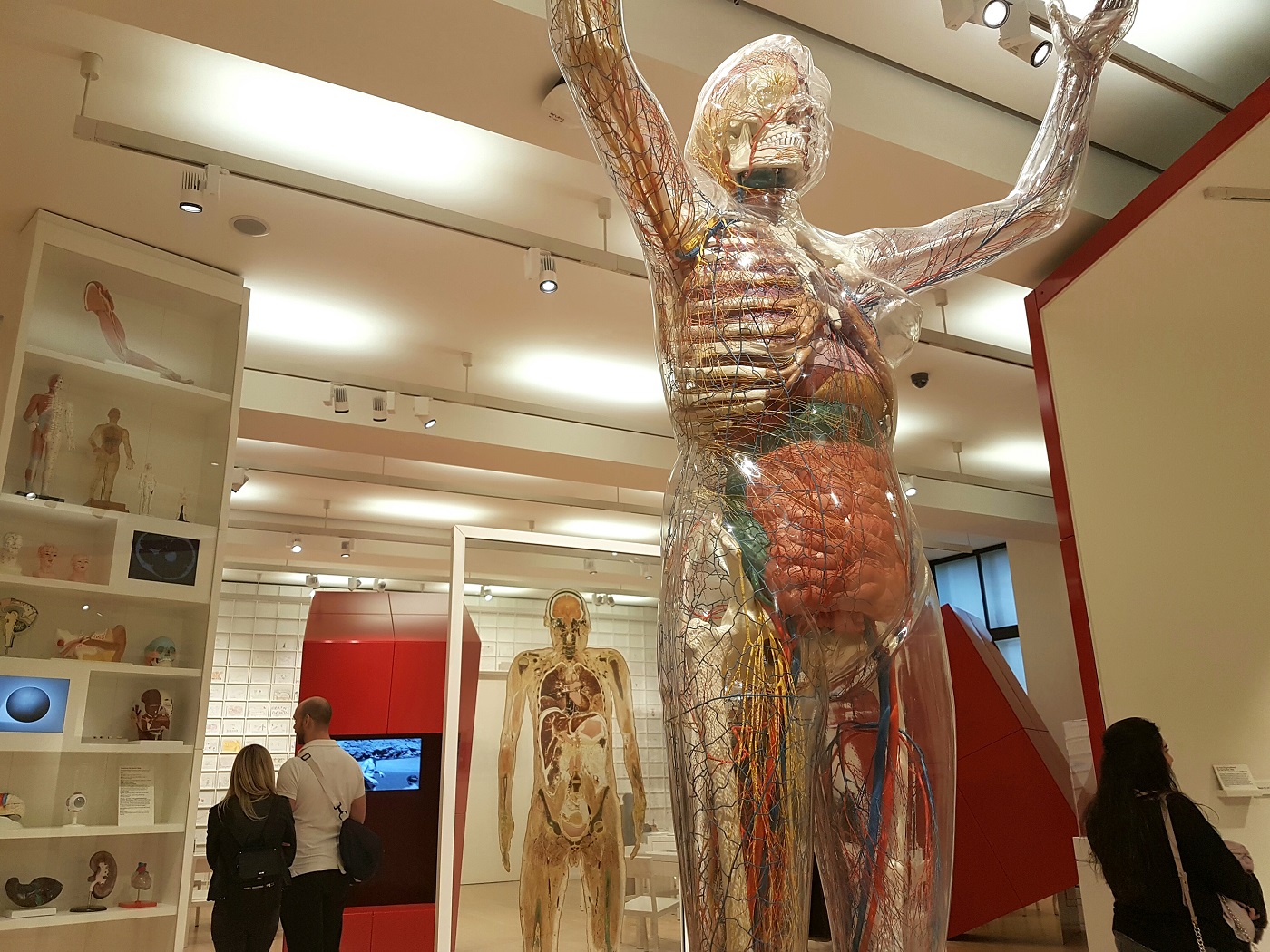 Billed as ‘the free destination for the incurably curious’, this weird and wonderful museum explores what it means to be human through interactive and playful exhibitions. You’ll learn stacks of obscure and fascinating facts without even trying, as you admire medical artefacts, x-rated phallic ornaments or cheeky chamber pots.

And there are plenty of opportunities to unleash your own creativity and become part of the exhibition: use the free experimental photo booth to capture your psychic transparencies, or borrow some felt tips to contribute your interpretation of ‘curious’, ‘torture’, or ‘nude’ to the museum’s walls . Top tip: look up when you enter the building and you’ll see one of Antony Gormley’s iconic figures hanging from the ceiling. 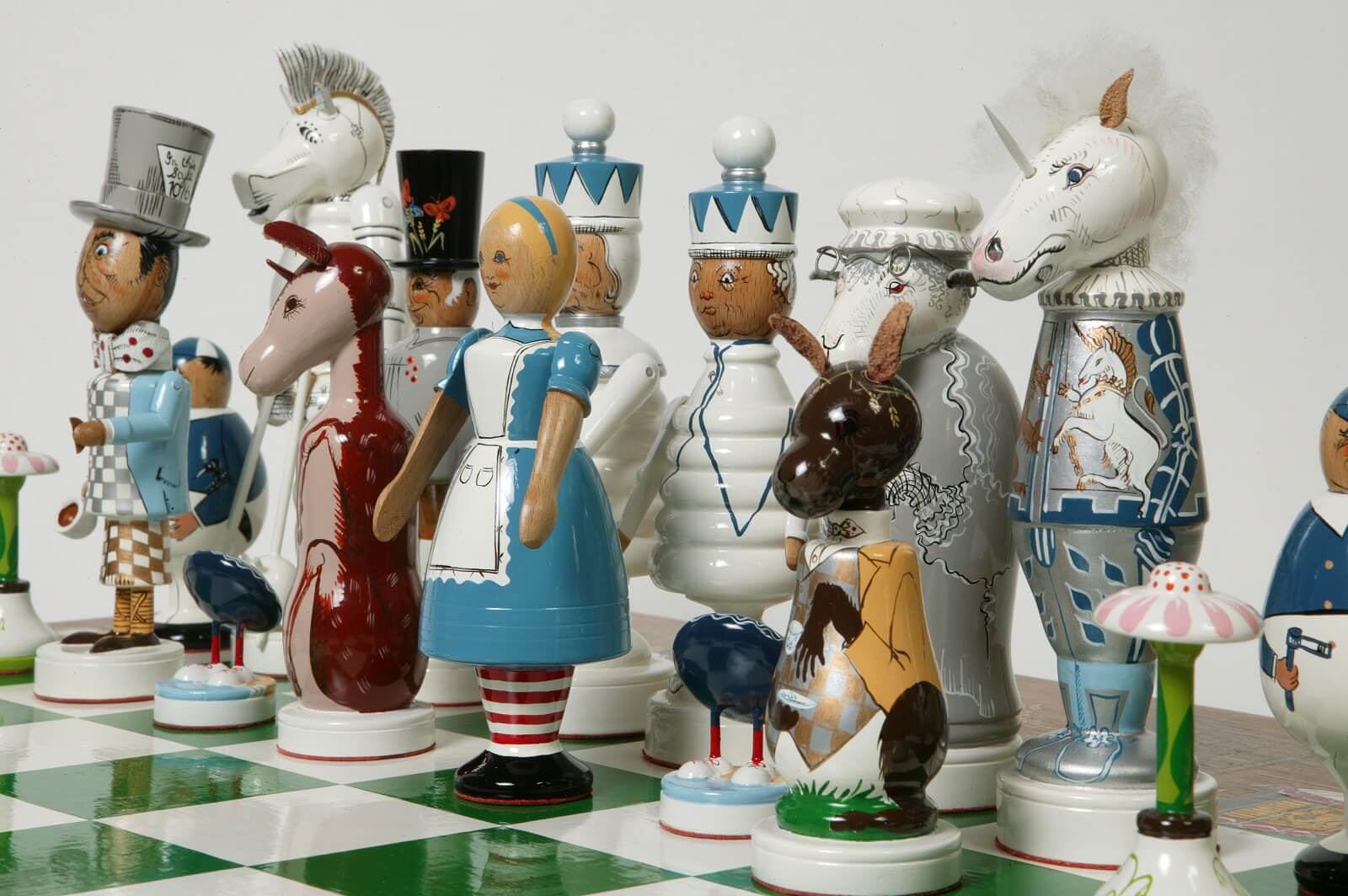 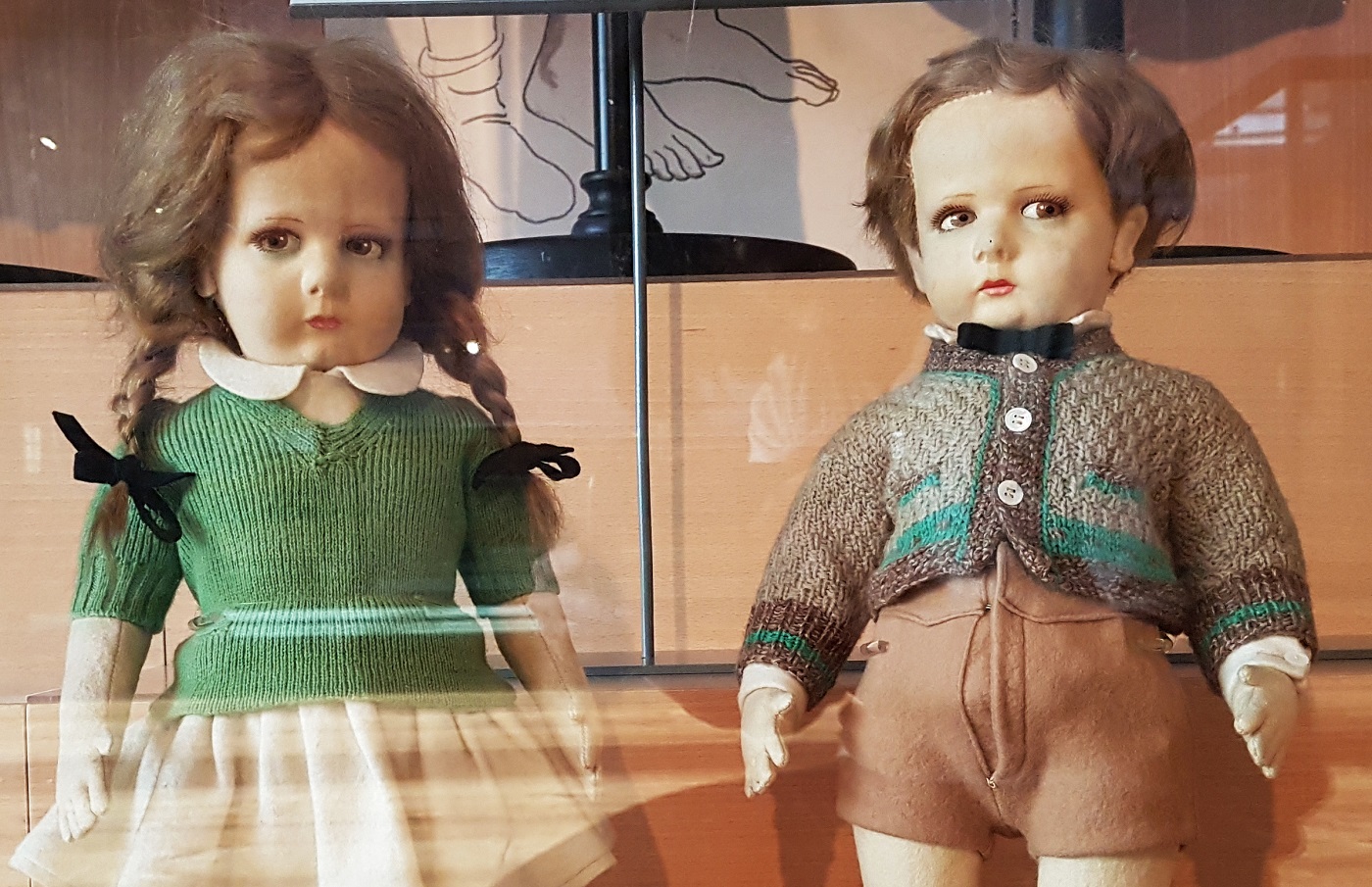 Located in a beautiful redbrick building in Bethnal Green, this museum is the largest of its kind in the world. It’s not just for kids, though – it provides a delightful, nostalgic trip back to more innocent times, with a fascinating collection of toys and games from yesteryear.

The current temporary exhibition is dedicated to board games and it’s an absolute treat. You can learn about their history, discover some weird and wonderful examples, and even spend the afternoon playing them – all completely free of charge. Just try not to look the creepy dollies in the eyes ? 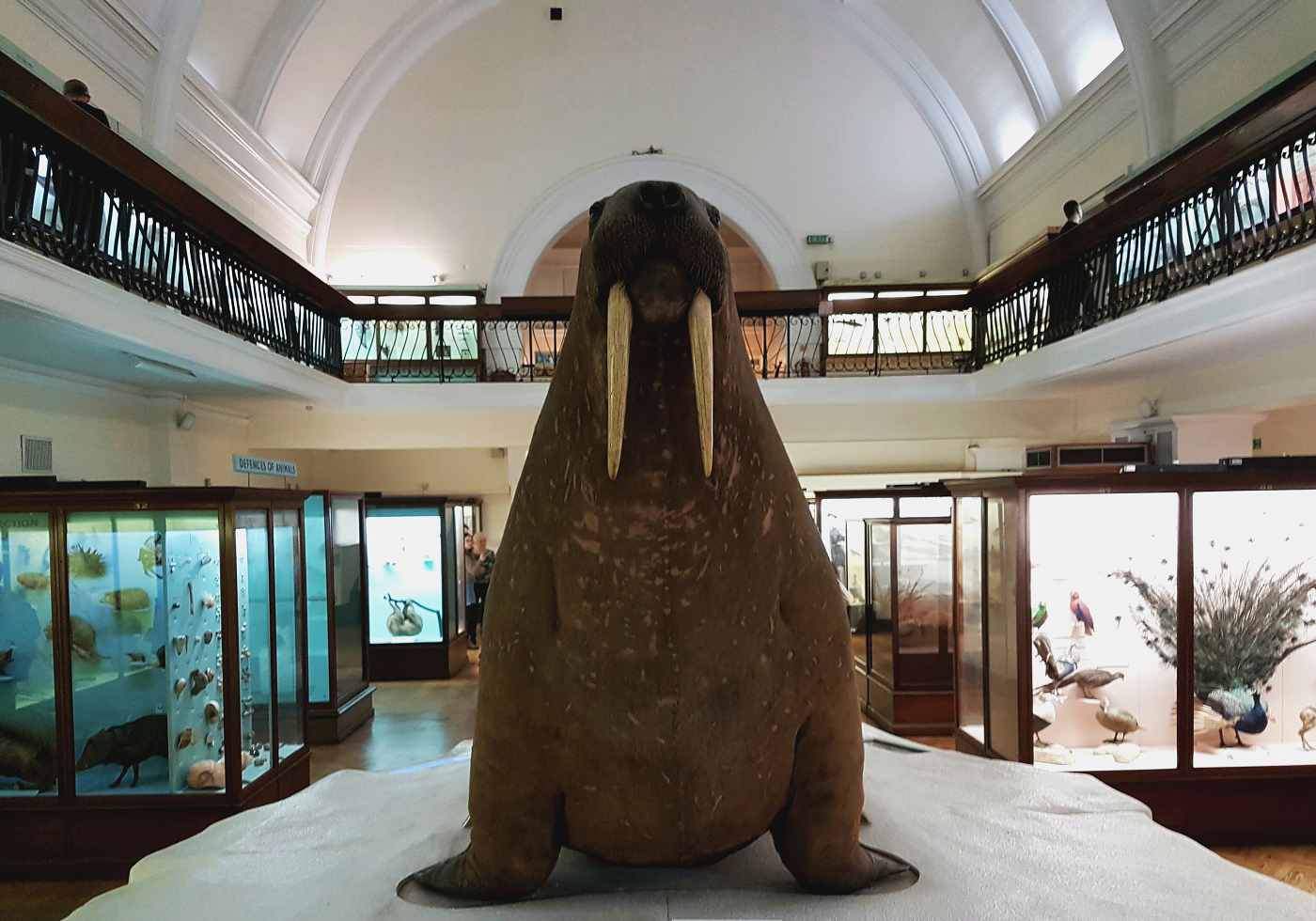 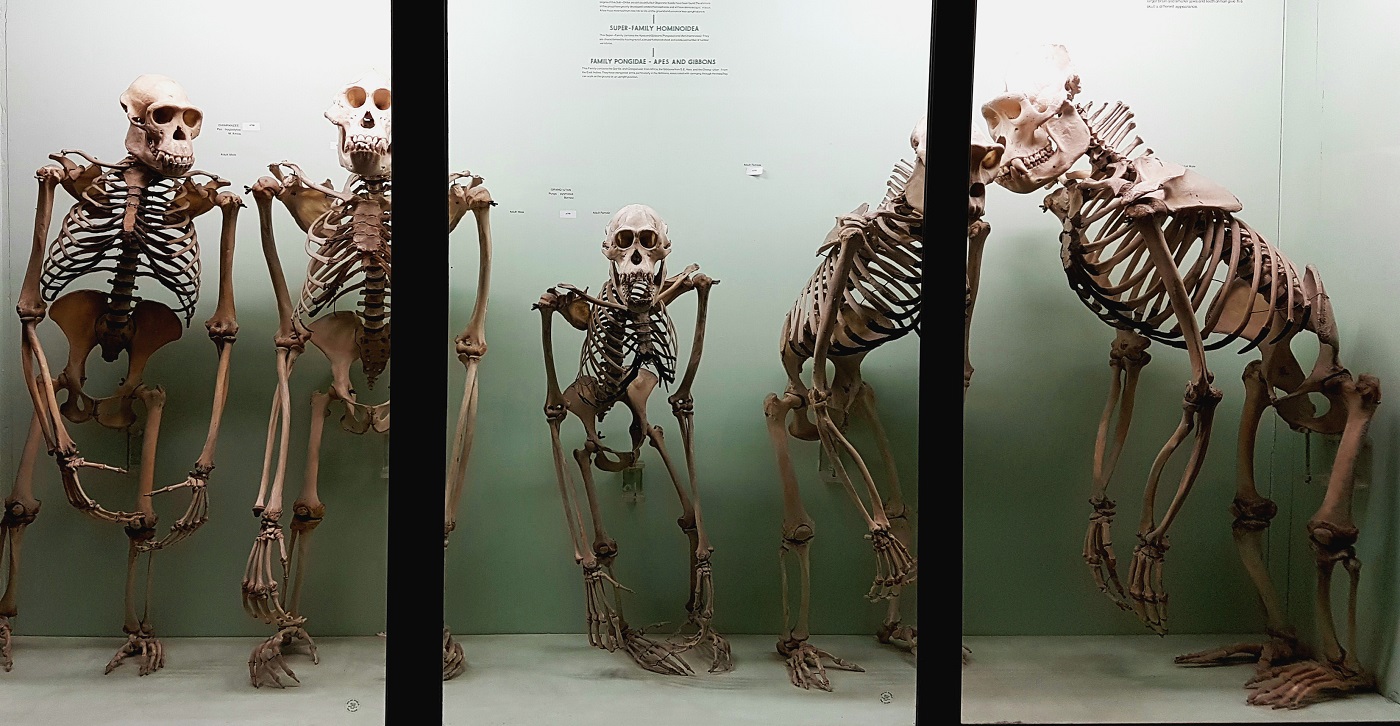 This South London treasure has been open since 1890, when tea trader and compulsive collector, Frederick John Horniman, decided to share his wealth of extraordinary items that he had gathered on his travels. The collection includes insects, rare animals, masks, carved dolls, Egyptian mummies, tribal clothing, musical instruments, and even the skeleton of an alleged merman (a male mermaid).

But the star of the show is a walrus with a rather comical backstory. In a nutshell, it was stuffed by a Victorian taxidermist who’d never seen a living walrus before. Not knowing that they have large folds of skin, he overstuffed it to bursting.

The Horniman is one of the best free museums in London, and with its botanical gardens, free petting zoo and stunning views, it makes for a lovely lazy weekend trip. So don’t let its less-than-central location put you off. Top tip: fuel up with brunch at St David Coffee House beforehand. 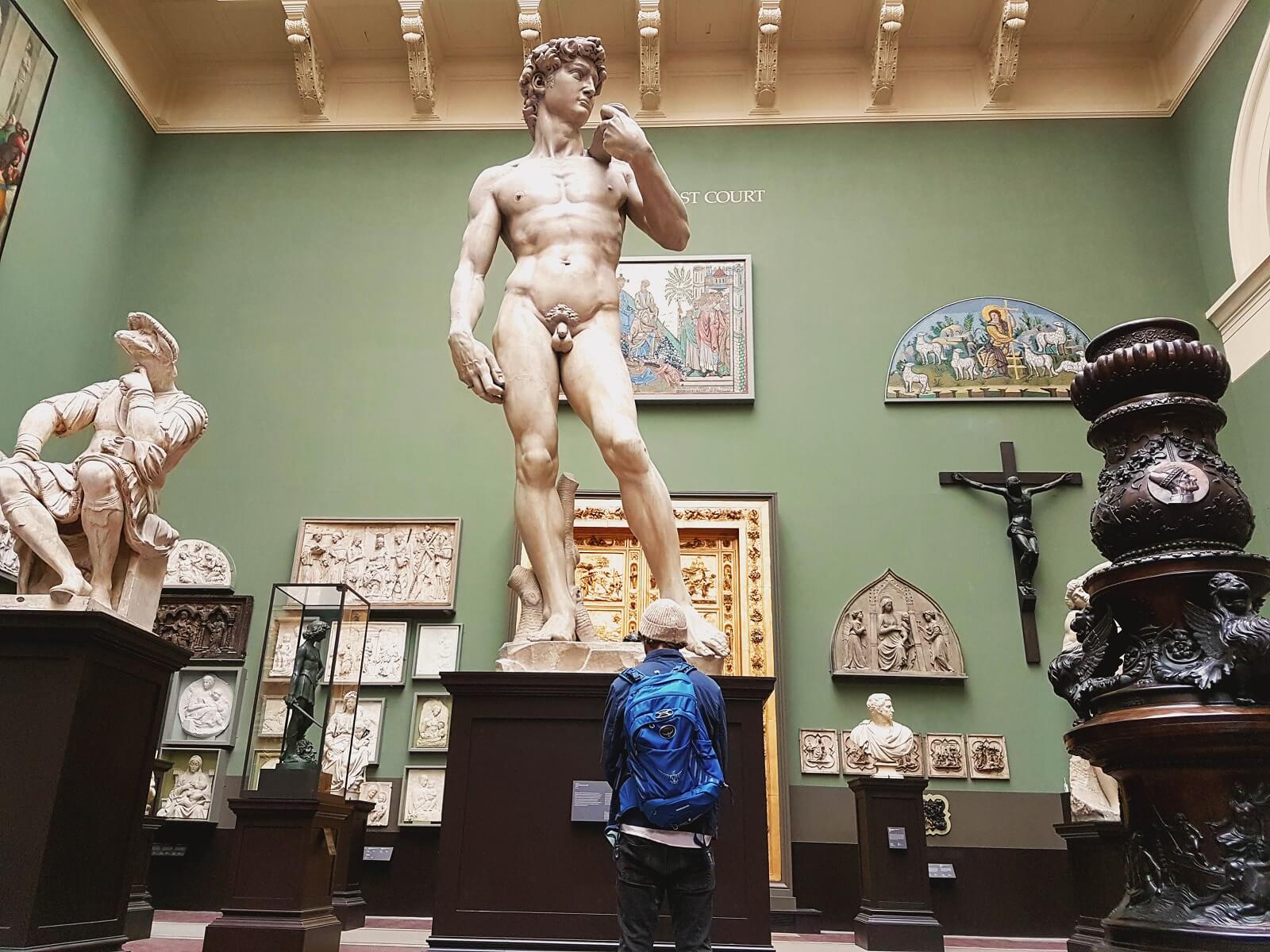 The V&A offers a decadent art and design extravaganza on a backpacker’s budget, attracting nearly 3.5 million visitors a year. Its vast permanent collection has something for everyone, be it textiles, paintings, architecture, ceramics, Japanese art, glass, china, furniture, or even wedding dresses. Even the building itself is a thing of beauty, making it one of the most instagrammable destinations in London.

With its magnificent cafe and tranquil courtyard out back, it’s an oasis of calm and refinement in central London. Plan to spend at least half a day here, because there’s SO much to see. 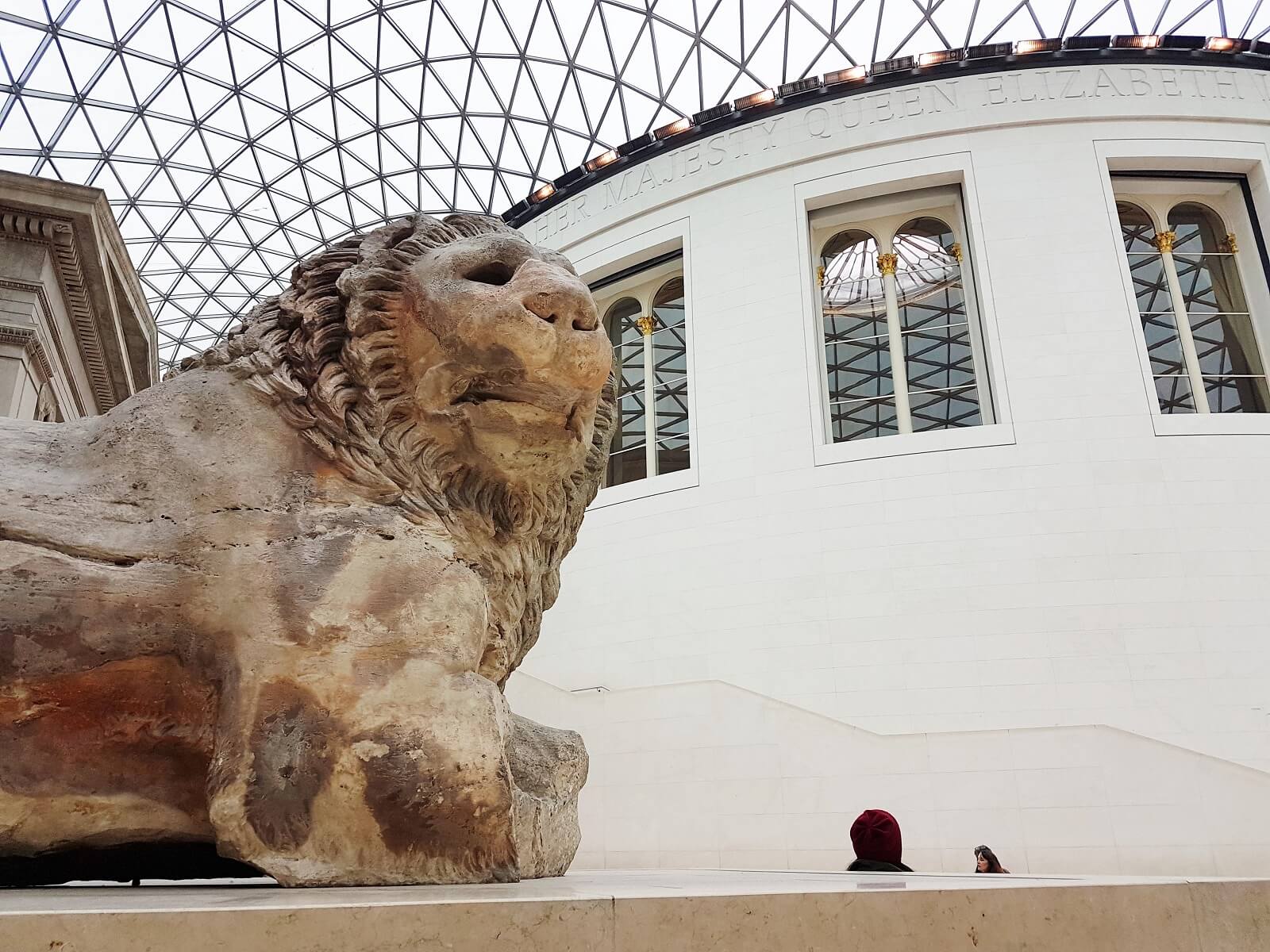 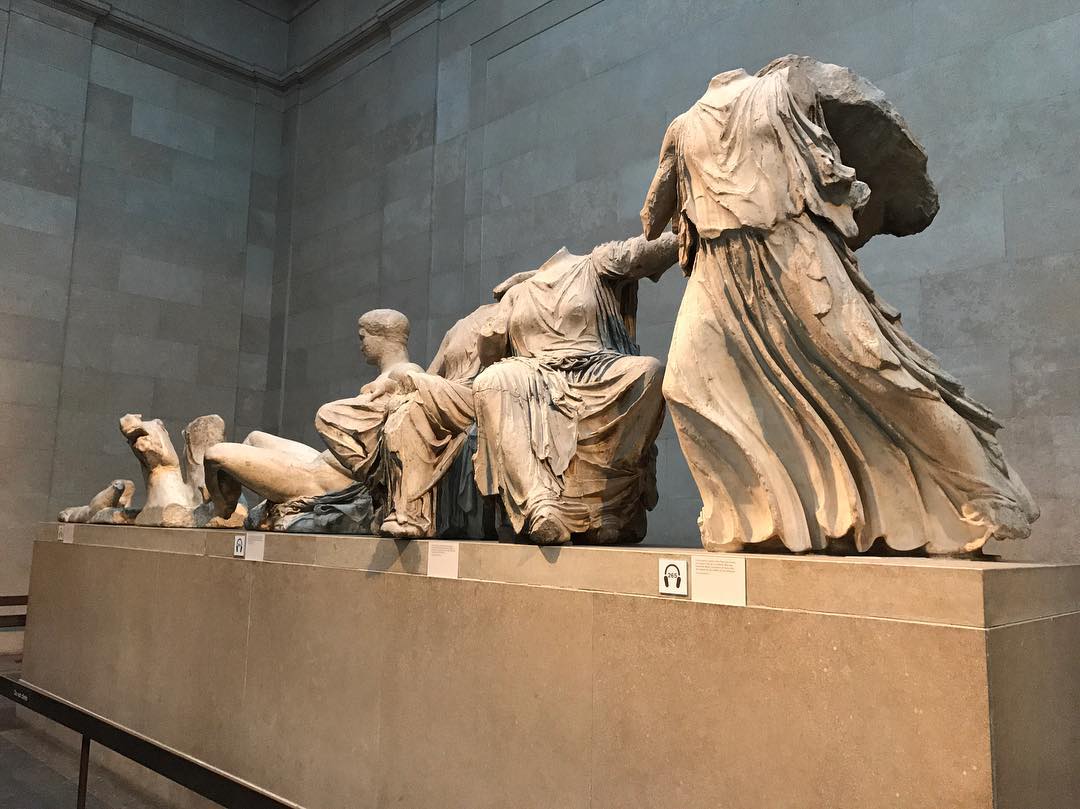 The British Museum has been offering free admission to ‘studious and curious persons’ since it was first founded in 1753. It’s the most popular museum in the country, with over 6 million visitors a year but don’t worry, it’s big – very big, so there’s room for everyone. Where to start with this magnificent, overwhelming place, dedicated to human history, art and culture? Deep breath – well, the museum covers all the continents, prints and drawings, science and research, money, curiosities, prehistory, painting, antiques, treasures.

It’s a wonderful museum to just wander through and soak up. Star exhibits include the famous Rosetta Stone and Elgin Marbles, while the oh-so-civilised reading room and glass-domed Great Court are not to be missed. Don’t be put off by the crowds outside; the queue moves quickly and it’s worth the wait. 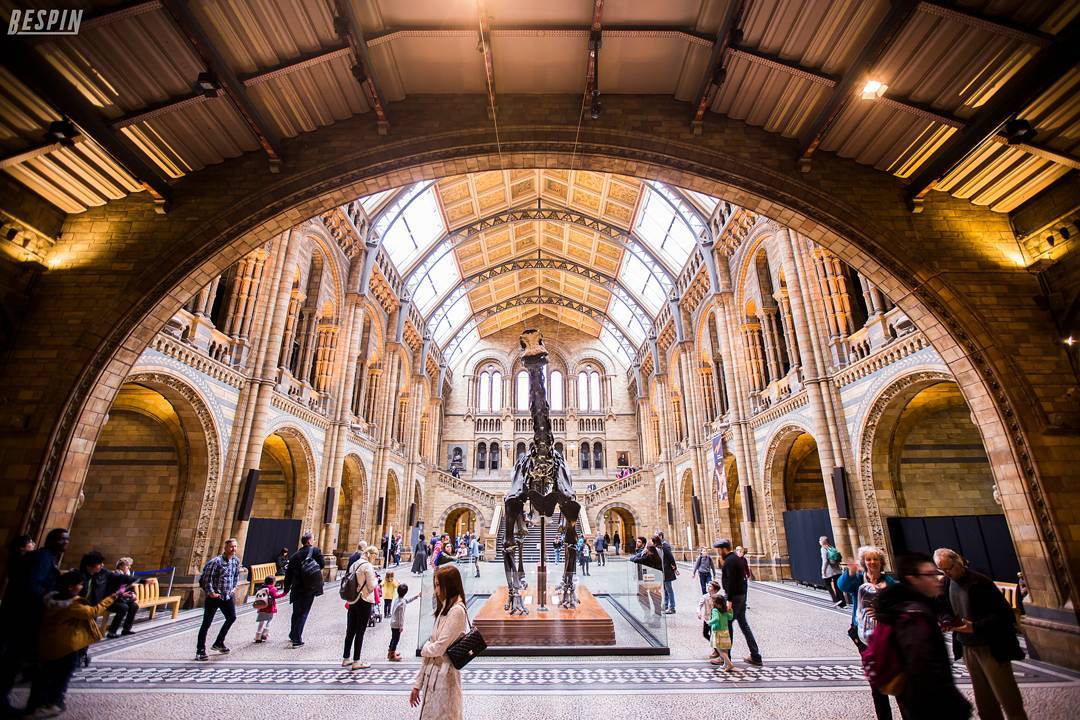 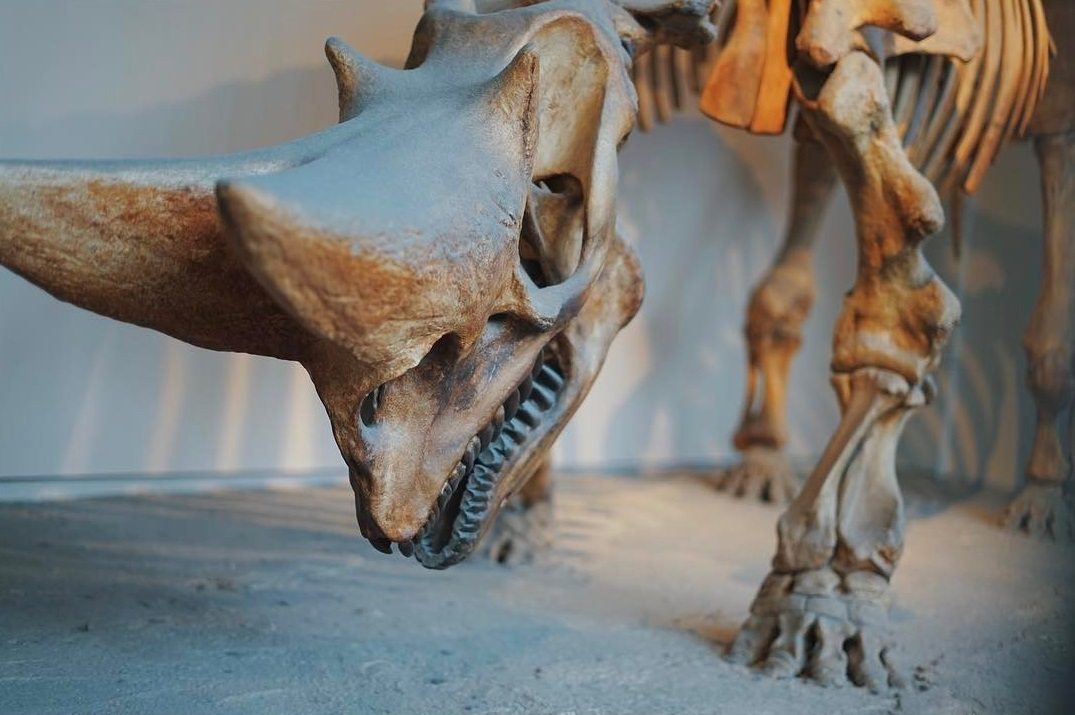 The National History Museum is home to a staggering 80 million specimens, including ones from Charles Darwin’s very own collection. There are skeletons, stuffed animals, insects, sea dragons, extinct creatures, predators and prey, and there is also a rather terrifying dinosaur animatronic Tyrannosaurus Rex lurking around.

The Natural History Museum is opposite the Science Museum and The Victoria and Albert Museum, both of which are free and well worth a visit, so you’ll need all your energy! Get your caffeine fix at Fernandez and Wells near South Kensington tube beforehand. 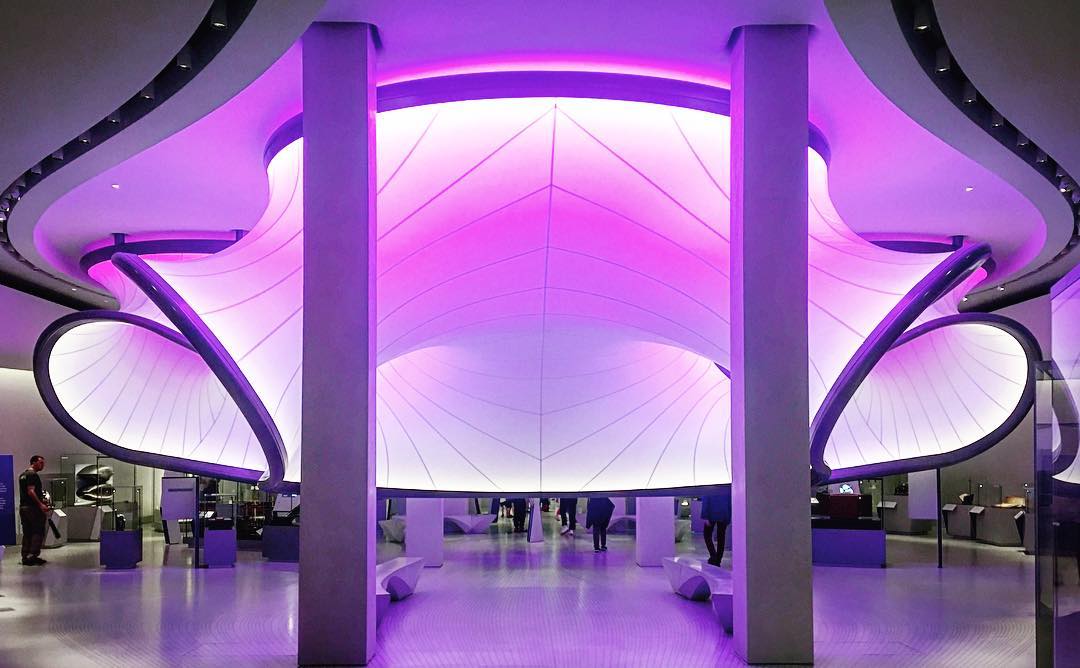 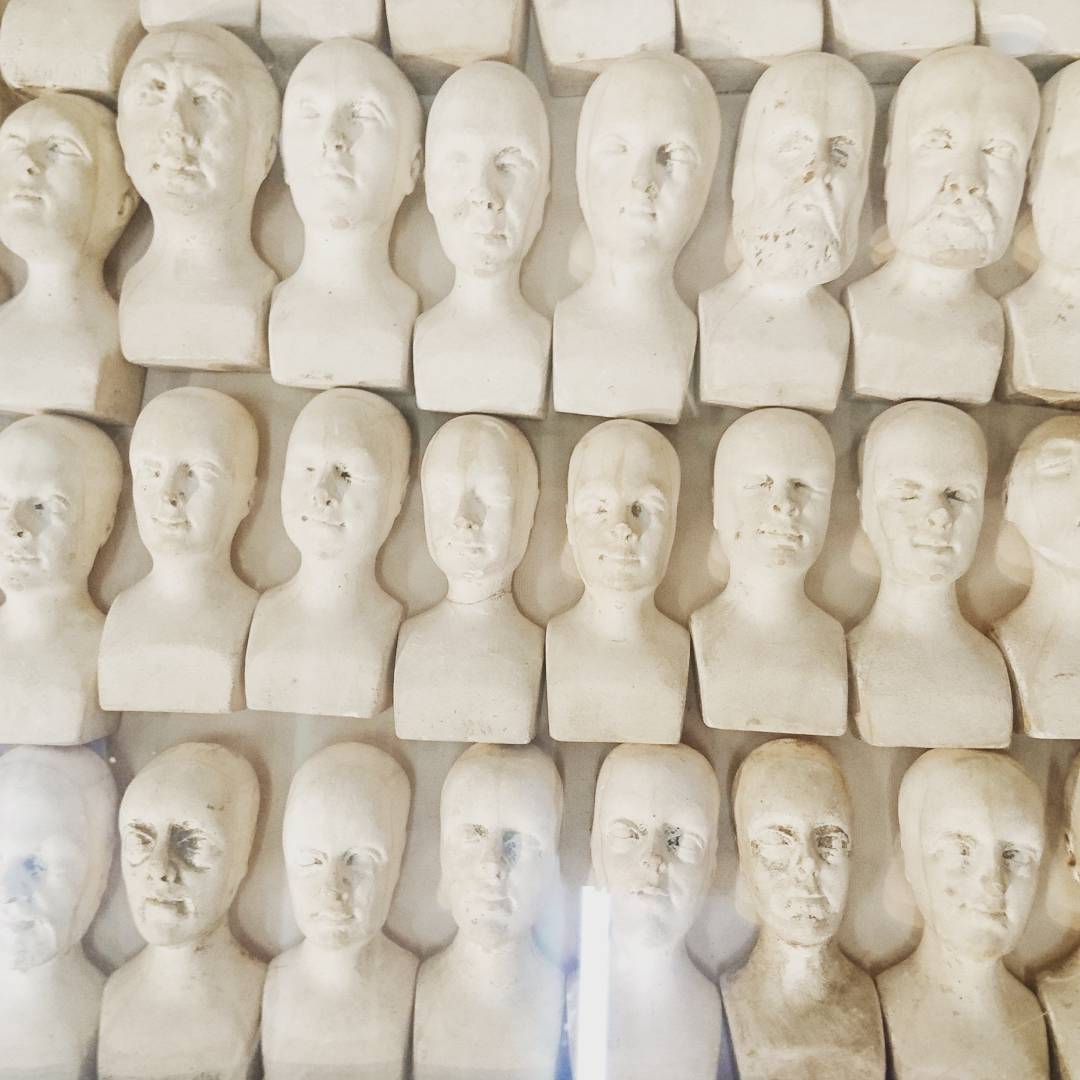 It’s official – science is cool. Over 3 million people visit the Science Museum every year. And why wouldn’t you when there are planes and trains and spaceships and rockets, interactive exhibits, computers and cameras through the ages, and a history of mathematics?

While you’re there, be sure to catch up with Eric, the UK’s first working robot, from 1928, who has been brought back to life by a 2016 Kickstarter campaign. 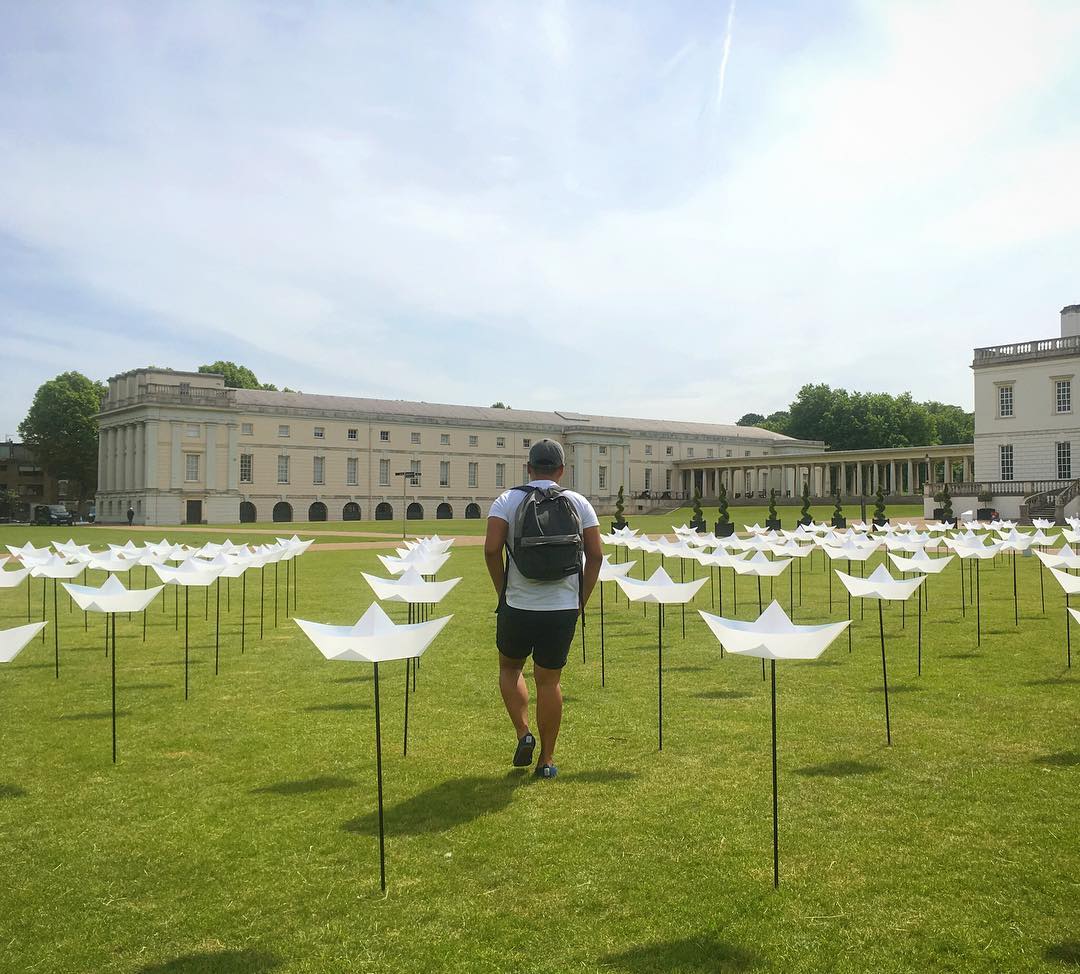 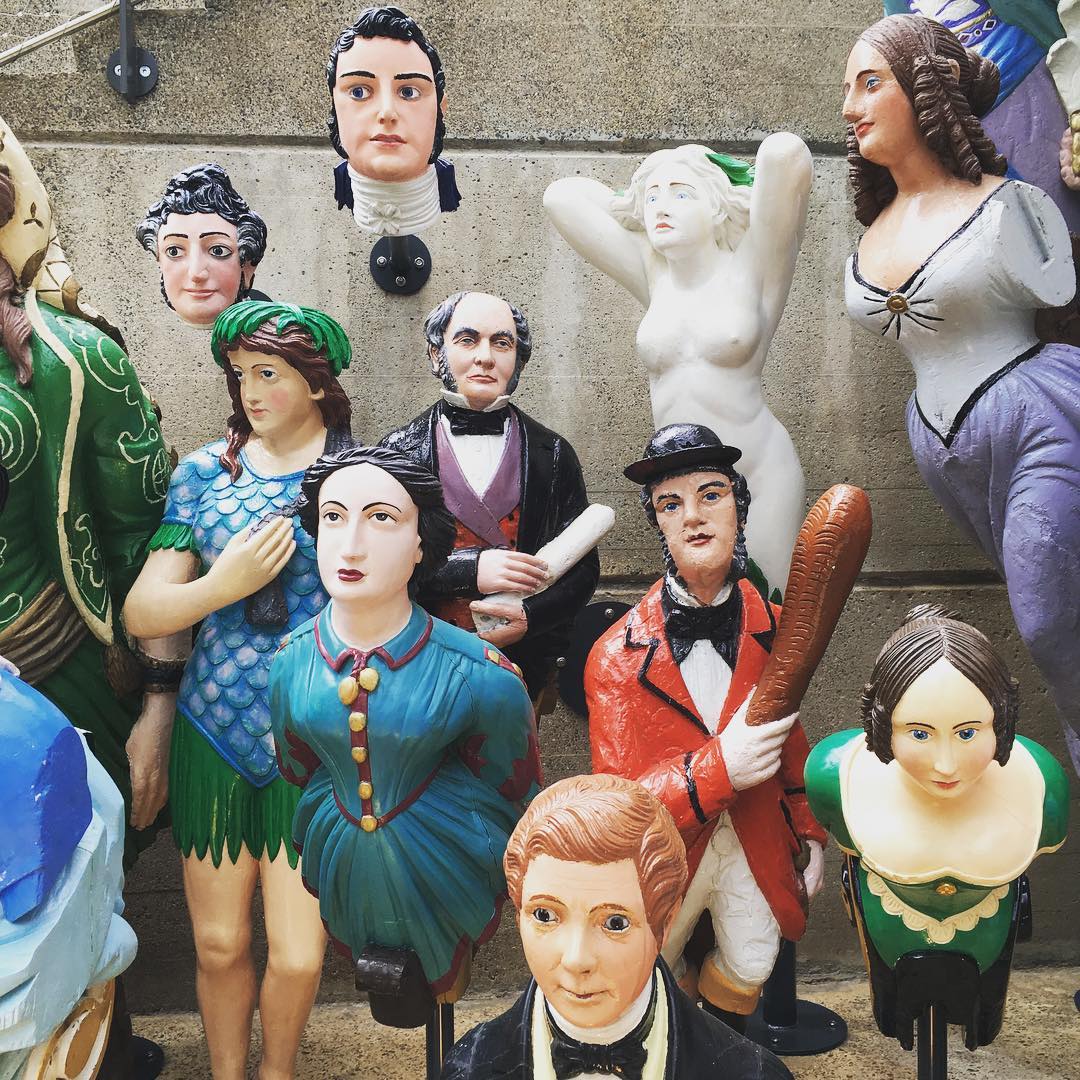 Take a day trip to genteel Greenwich and pay a visit to the National Maritime Museum. This excellent museum, located in the majestic surroundings of Greenwich Park, might just be the largest of its kind in the world. It’s certainly one of the most impressive, featuring a vast collection that spans artworks, maps and charts, memorabilia and thousands of other objects, including ship models, navigating instruments and paintings.

What better way to explore London, than in this fantastic museum, devoted to the history of one of the greatest cities in the world. The exhibits span the city’s long and illustrious past from 450,000 BC (when there weren’t so many coffee shops as there are now) right up to the present day. Along the way you can experience what it was like when the city of Londinium came to life during Roman times, the turbulent Medieval era in the city, the 17th century’s war, fire and plague…

It will give you a deeper understanding of how London grew to become the thriving metropolis it is today. And the best bit is that the museum continues even after you leave, and step into the living, breathing city once more. 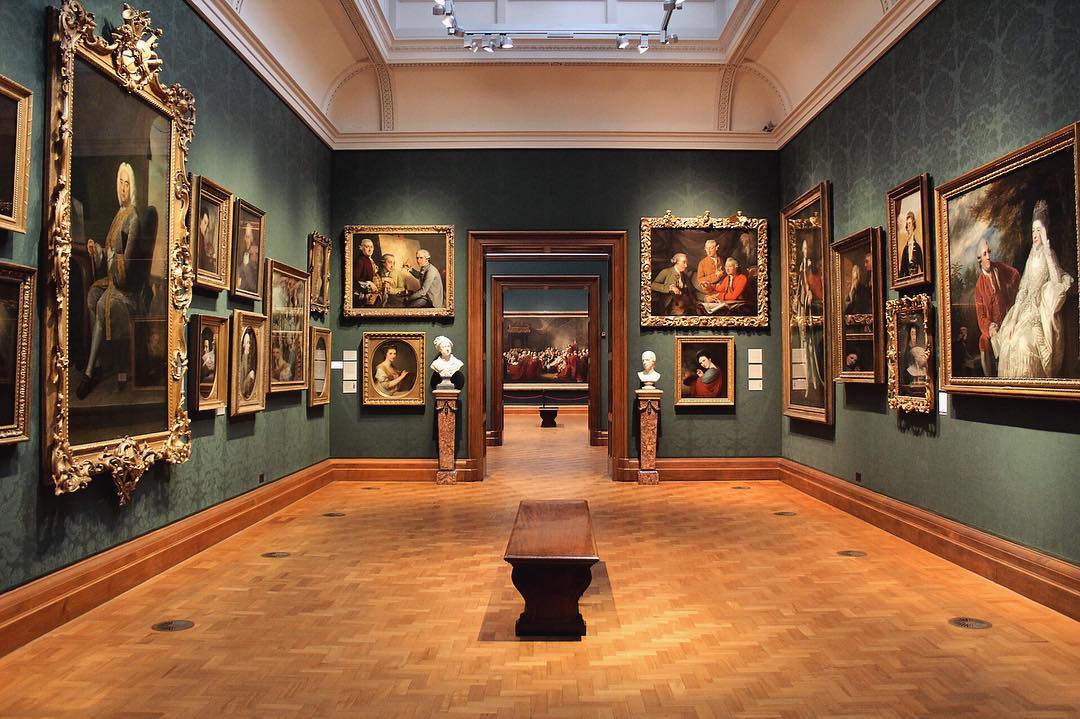 National Portrait Gallery / Self-Portrait As A Soldier By Ludwig Kirchner

Before there were selfies, you basically had to hire someone to paint you in order for your face to be immortalised for all to see. Next door to the National Gallery in Trafalgar Square, the National Portrait Gallery houses a collection of portraits of historically famous British people. Seek out paintings of Shakespeare, Queen Victoria and Winston Churchill, as well as more recent well known faces, such as Paul McCartney, Lady Diana and Amy Winehouse.

Whether you prefer Van Gogh or Banksy, there are plenty of art galleries in London to keep you entertained. 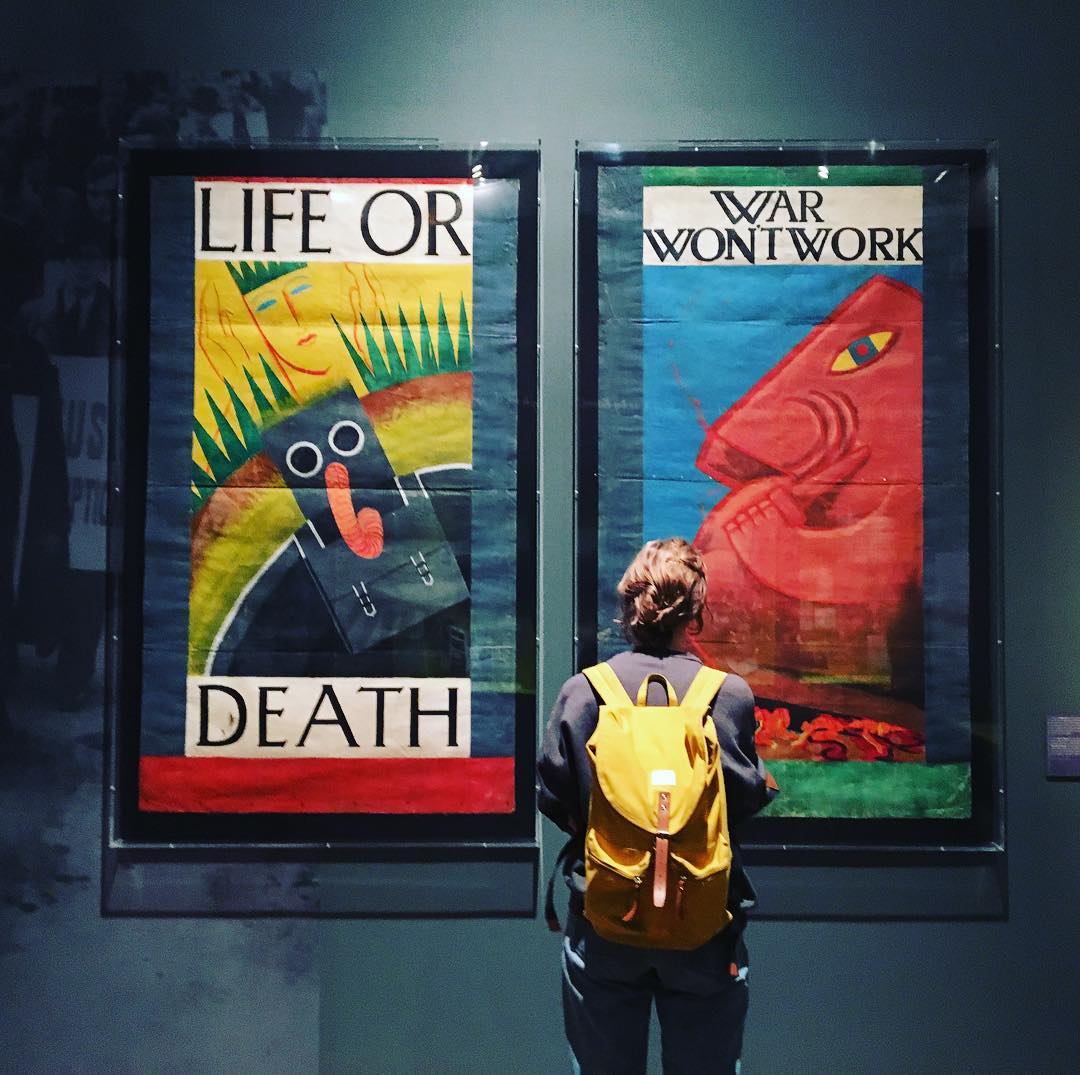 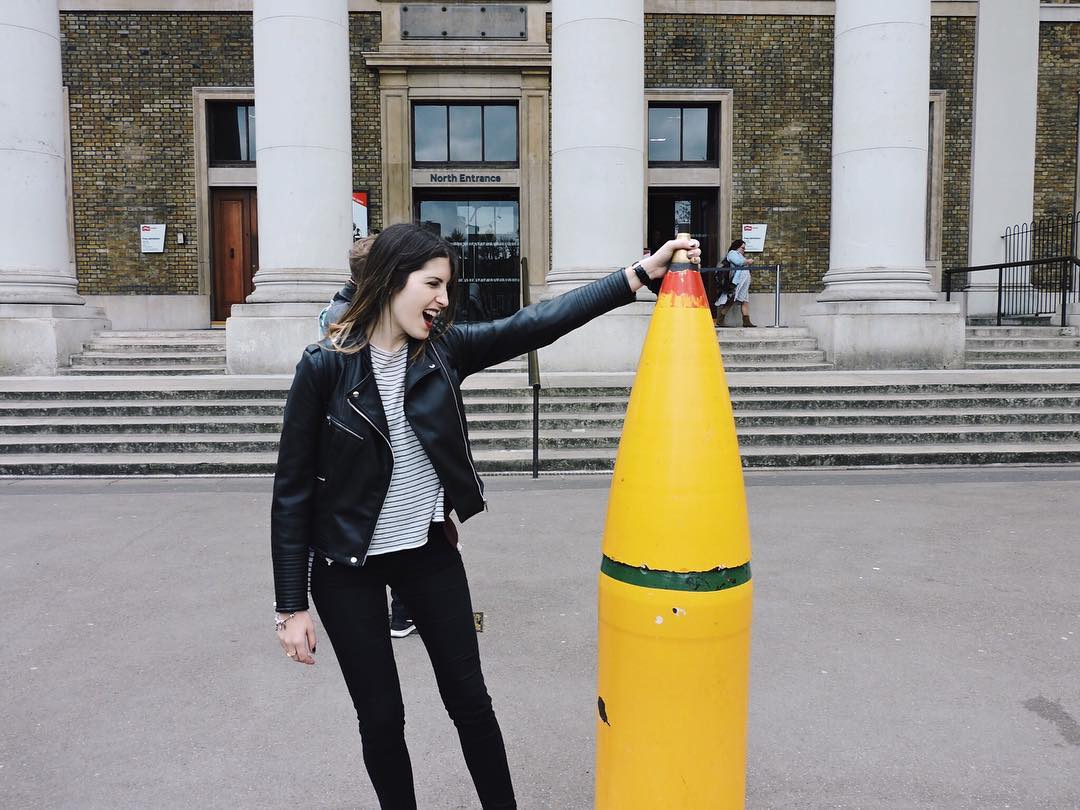 A museum about the experience of war from World War One to the present day, including D-Day, the Battle of Britain, and the Cold War. The permanent exhibits include ‘Curiosities of War’, a collection of unusual objects connected to modern war; and ‘A Family in Wartime’, detailing the day to day lives of ordinary people during World War Two, who lived down the road from the museum in Stockwell. The museum offers fascinating and sobering into one of humankind’s most enduring obsessions. 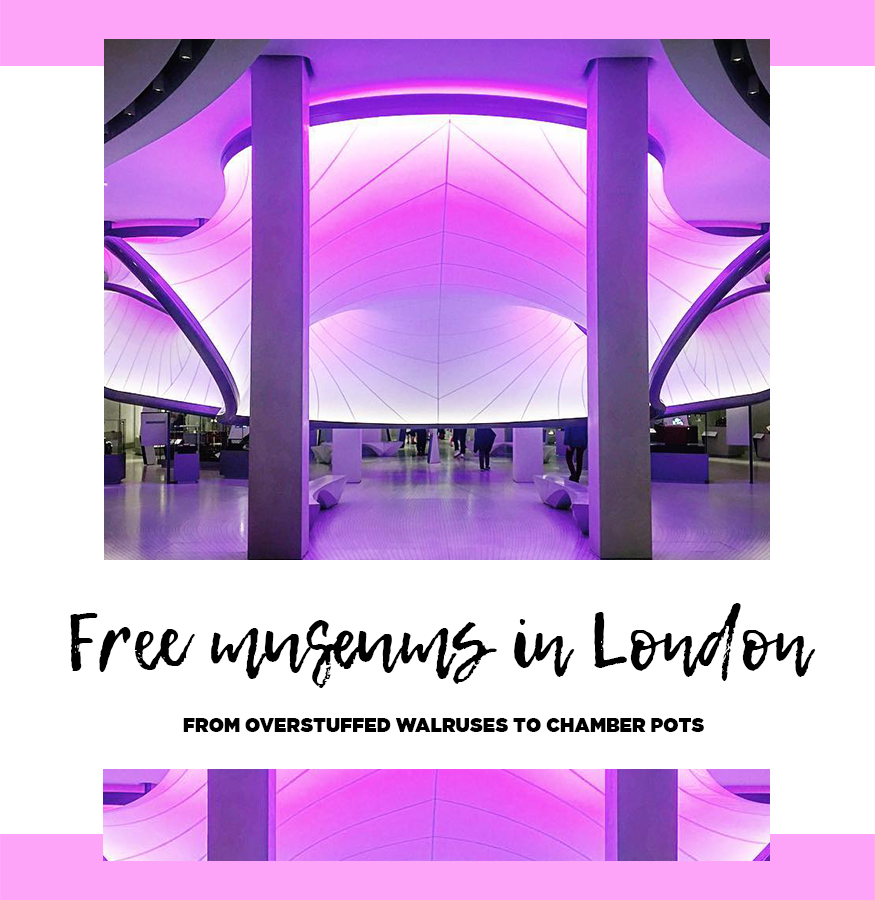 Know a really cool free museum in London we forgot to include? Tell us about it in the comments below and we’ll add it to the list ?