Did you know that London is 47% green space? Or that there are a whopping 8 million trees – some of which are thousands of years old – making it the world’s largest urban forest? Yep, the Big Smoke is secretly a wild paradise of amazing green spaces… broken up by the odd skyscraper. If you’re looking for free things to do in London, then parks are also one of the best ways to keep your budget lean – especially in the summer!

So what are the best parks in London? Whether you fancy a spot of pond dipping, a hip BBQ or some wild swimming, there’s something to suit every taste – have a read of our favourites, and get yourself some London park life! 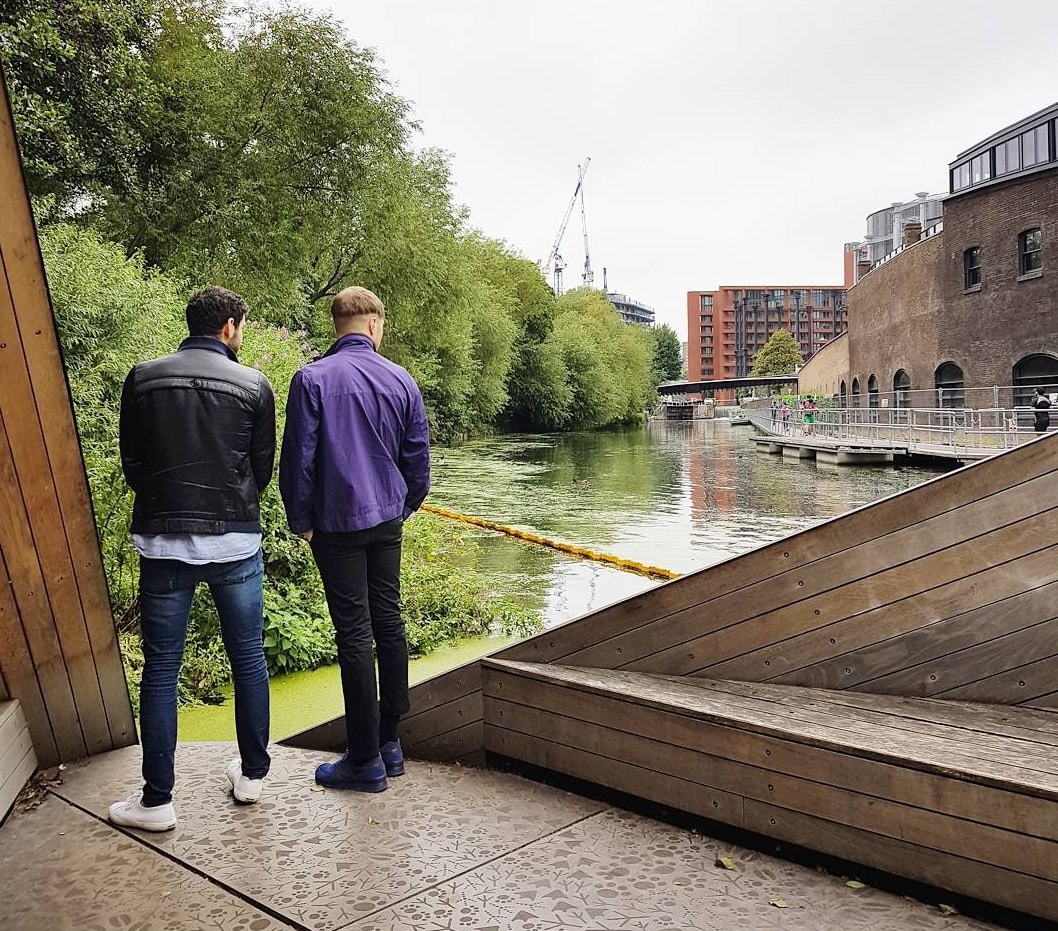 Fancy a spot of pond-dipping near King’s Cross? ?@emma.v.martell

If you’ve ever fantasised about pond dipping and woodlouse stalking in central London, then you need Camley Street Natural Park in your life. Nestled between the train tracks leading into King’s Cross and Regent’s Canal, this is one of the most underrated parks in London. Even many locals don’t know this place exists! But for those who do, it’s a tranquil place to reconnect with nature for an hour or two without leaving central London. If you don’t feel like getting your hands dirty, simply head through the trees to the floating viewing platform, where you can watch the barges float by along the canal. 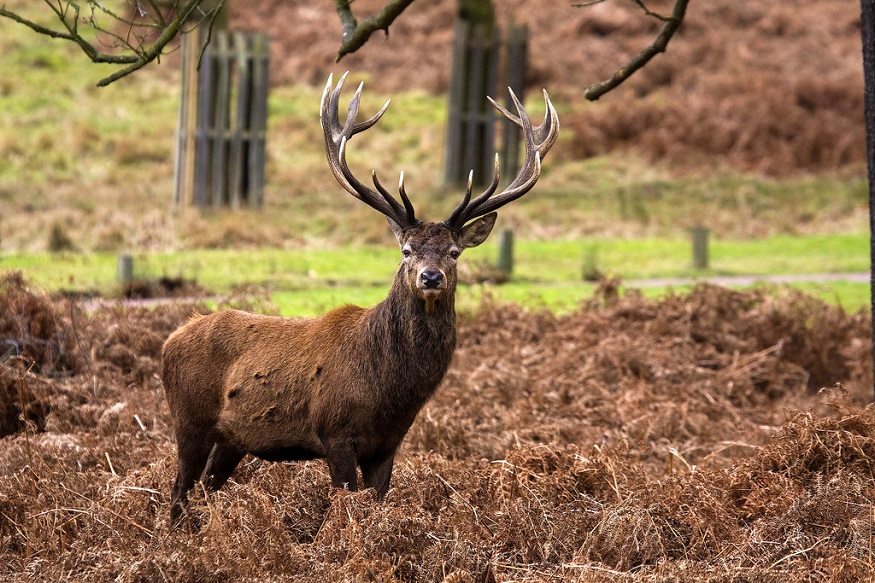 Situated at the southwesterly end of the district line, this is by far the biggest park in London and well worth a trip out of the centre. Home to hundreds of wild deer, foxes, bats and all sorts of creepy crawlies and birds, this is the place to come for your fix of the Great British countryside without stepping foot outside the M25. If you’re visiting in April or May then make a beeline to the Isabella Plantations on the southern tip of the park, when thousands of azaleas transform it into a psychedelic wonderland of pinks and purples. 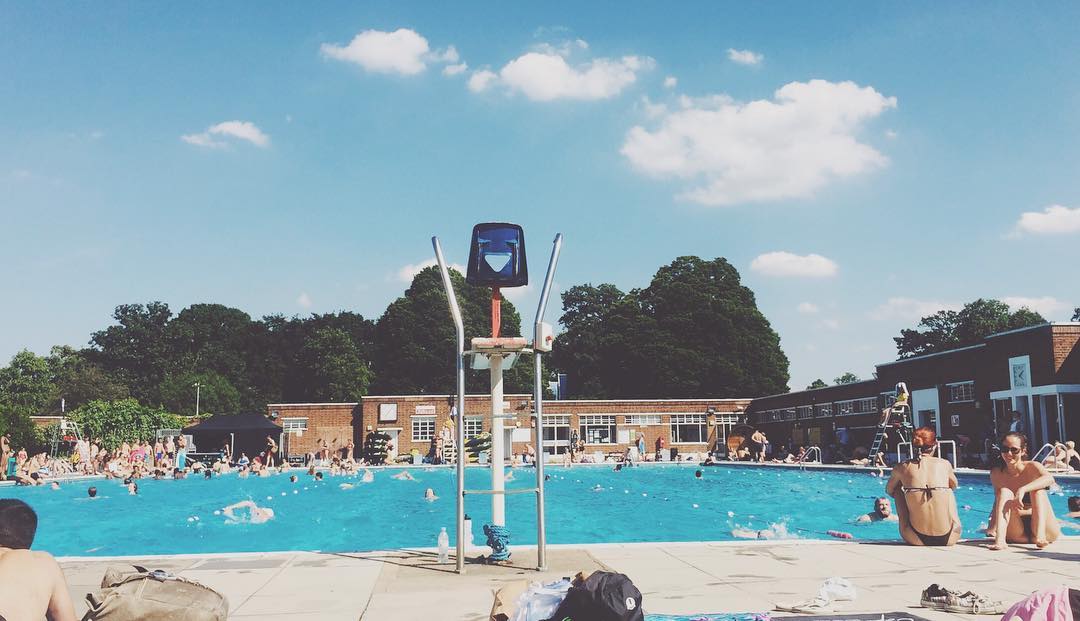 The lido in Brockwell Park is a Grade II-listed Art Deco beauty ?@marco_raciti

About a 20 minute walk from the nearest tube station in Brixton, Brockwell Park is one of the least touristy parks in London. But amongst Londoners the park is extremely popular thanks to its Instagram-worthy lido, vast grassy expanses and the incredible Herne Hill market next door, where you can pick up an epic picnic of hot sausage rolls, locally-produced salad, ALL THE CHEESE and excellent coffee. Definitely one of the best parks in London. 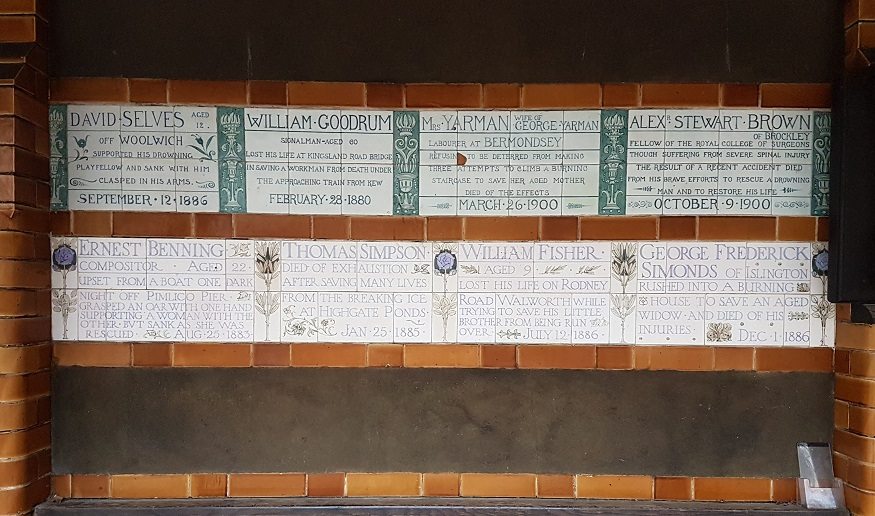 Postman’s Park is a moving shrine to heroism and self-sacrifice ?@emma.v.martell

Totally unique and likely to move you to tears, Postman’s Park is tucked away between St Paul’s and the Museum of London. The star attraction is the ornate Victorian memorial dedicated to ordinary men, women and children who sacrificed their own lives to save others. The stories are so simple yet powerful that you’ll end up reading every single one…

William Fisher, aged 9, lost his life on Rodney Road Walworth while trying to save his little brother from being run over, July 12th 1886… Alfred Smith, Police Constable, who was killed in an air raid whilst saving the lives of women and girls, June 13th 1917… David Selves, aged 12, supported his drowning playfellow and sank with him clasped in his arms, September 12th 1886… A trip here is a must if you need to clear your head and get a little perspective on your own life. 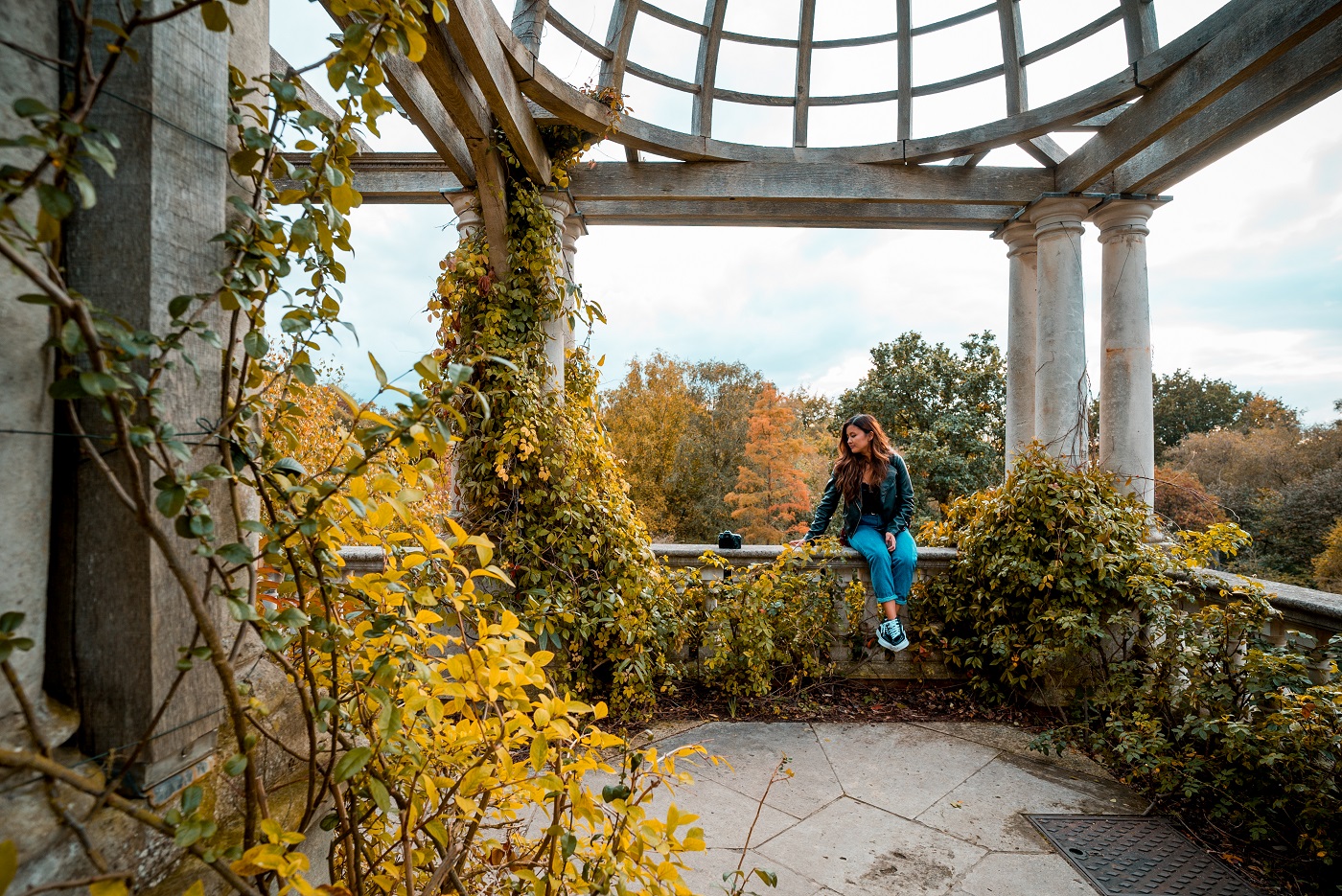 The hidden Hill Garden and Pergola on Hampstead Heath ?@ic.theworld

Hampstead Heath is a large ancient woodland park in North London where you can easily lose yourself – quite literally. There are loads of hidden nooks and crannies to explore: public toilets that look like something out of Hansel and Gretel, jaw-dropping views of London’s skyline from the top of Parliament Hill, or the listed and notoriously tricky to find Hill Garden and Pergola. If you need to cool down, there’s a budget-friendly public lido, or for the more adventurous a dip in the icy Bathing Ponds are a rite of passage for Londoners. Be sure to bring some sensible footwear as most of the paths are little more than muddy tracks. 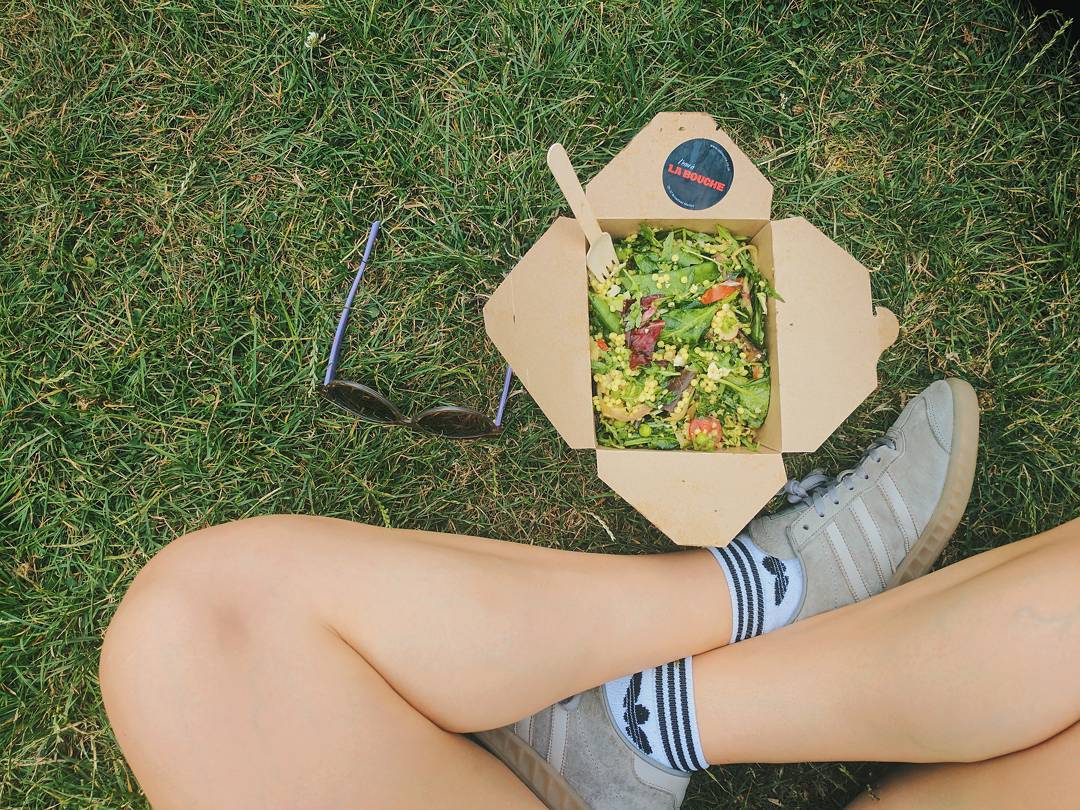 On paper, London Fields is nothing special. But on a sunny Saturday afternoon, the atmosphere is magical. Located right next to Broadway Market just north of Regent’s Canal, this London park fills up at the weekends with hip locals eating street food from the market, drinking cheap beers and playing music until sunset. For those on a really tight budget, this is also one of the few parks in London where you’re allowed to have a BBQ, so grab some friends and pile the veggie skewers up high. 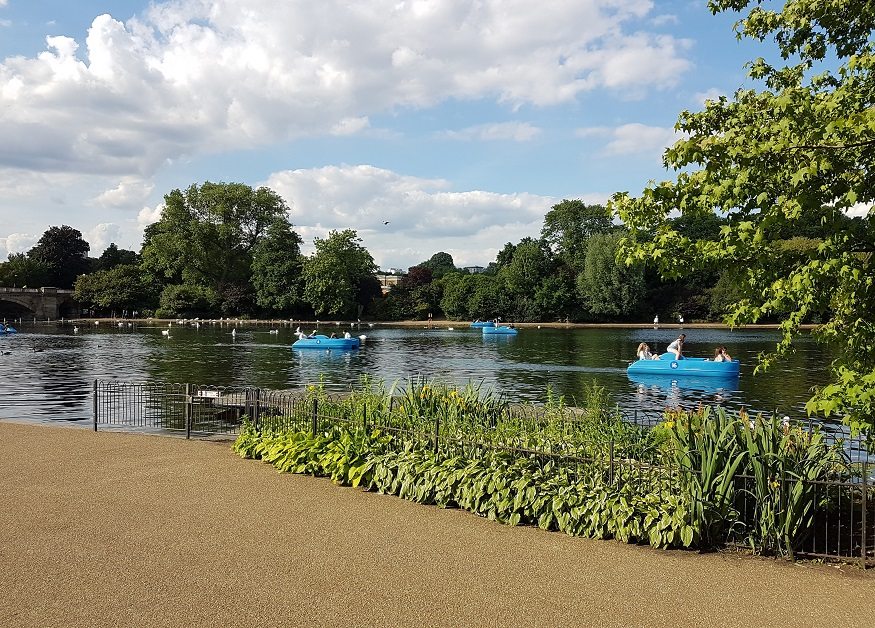 Pedalos on the Serpentine in Hyde Park ?@emma.v.martell

No list of the best parks in London would be complete without mentioning Hyde Park. It’s probably London’s most famous park, but don’t worry about being surrounded by hordes of tourists: it’s big enough to not feel crowded, and there’s plenty to keep you busy: a freshwater lido in the Serpentine if you don’t mind a bit of slime, the excellent Serpentine Gallery, horse riding for the mega rich and miles of smooth paths for skating. Hyde Park is also a great place to see London’s famous parakeets. Nobody quite knows how these colourful birds got here – some say they escaped a film set, others claim they were released in the Great Storm of 1987 –but they’re very friendly so bring some food and have your camera ready. 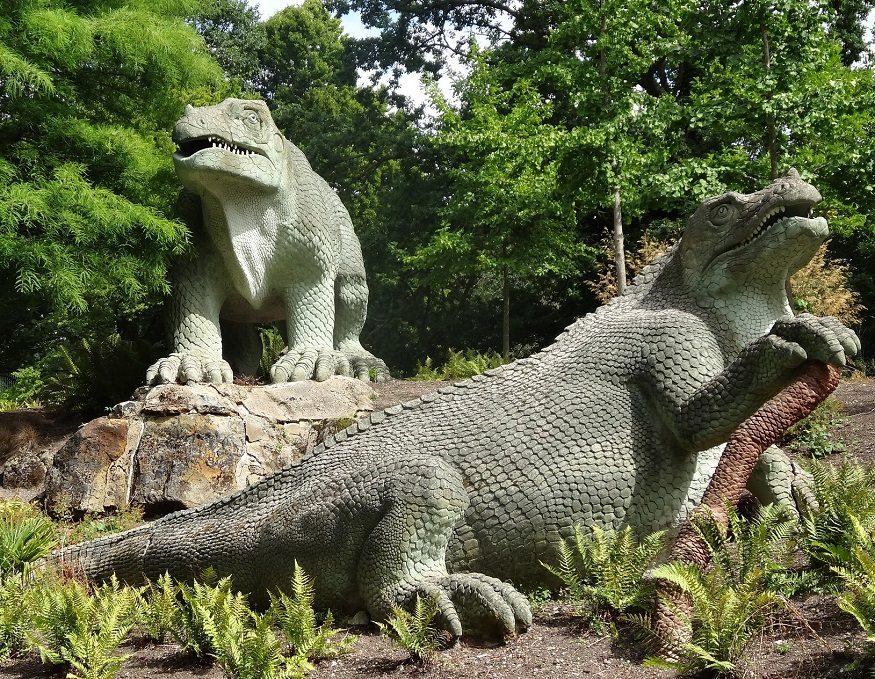 Dinosaurs according to the Victorians ?randomlylondon

Crystal Palace isn’t on the radar of most visitors to London, but if you fancy a chilled-out little trip out of the centre then it’s a great place for vintage bargains, cute little coffee shops and… factually inaccurate dinosaurs! Yep, if you head down to the lake in Crystal Palace Park then you’ll stumble upon a collection of odd-looking dinosaur sculptures dating back to 1850 – designed by Victorians with only a vague idea of what dinosaurs actually looked like. 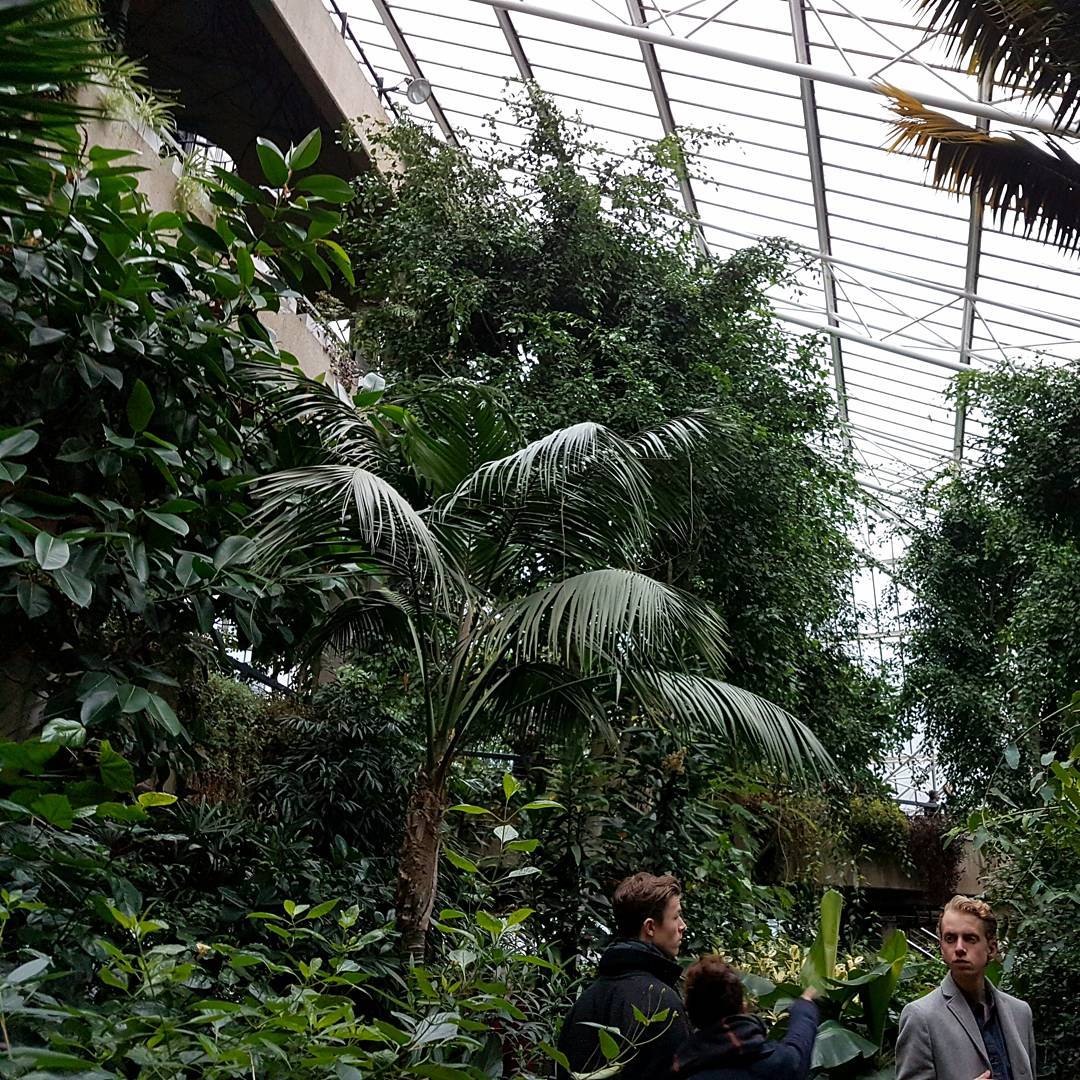 Concrete and succulents: the Barbican is the original hipster! ?@emma.v.martell

Another insider gem for your bucketlist, the Barbican Conservatory is only open to the public on Sundays, but it’s a MUST for plant-lovers in the capital. It may not be a park in the traditional sense, but with more greenery than you can shake a selfie stick at, you’ll leave feeling at one with nature. The glass and concrete backdrop of the stunning Brutalist Barbican makes it all the more beautiful, and the best bit is that it’s totally free to enter. 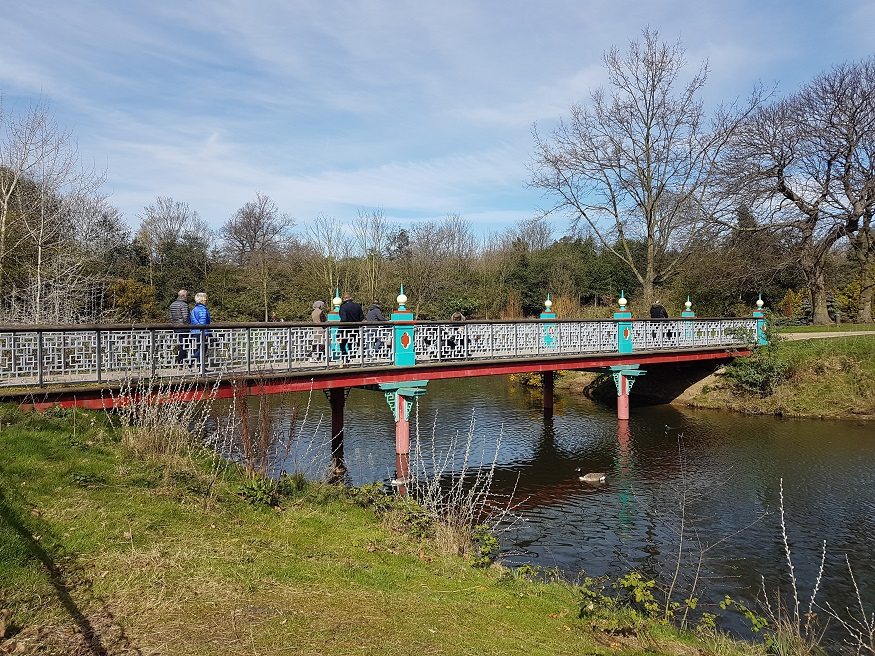 A stroll around the unpretentious Victoria Park in East London is the perfect Sunday morning pick-me-up. First, sort your hangover out at Pavillion – the best park cafe in London, where you can load up on an ethically-sourced Full English and some quality coffee overlooking the serene boating lake. Walk off your breakfast with a stroll around the lake, taking in the tranquil Chinese pagoda and ornate bridges. If you’re feeling particularly energetic, you can head to the free open-air skate park and show off your skills in the bowl. The park is a popular festival location, home to the annual Lovebox and Field Day festivals, and often used as an unofficial helipad for the London air ambulance – so keep your eyes peeled, and you might get to pose inside their helicopter.

The views from Primrose Hill are well worth the climb ?Diliff

One of London’s eight royal parks, Regent’s Park is the biggest in central London and also home to London Zoo. It’s a civilised place to go for a stroll, with landscaped gardens and a large boating lake. Adjoining the park to the North is Primrose Hill, one of the best places in London to watch the sunset. The panoramic views are incredible and there’s plenty of space to spread out on the grass with some friends. 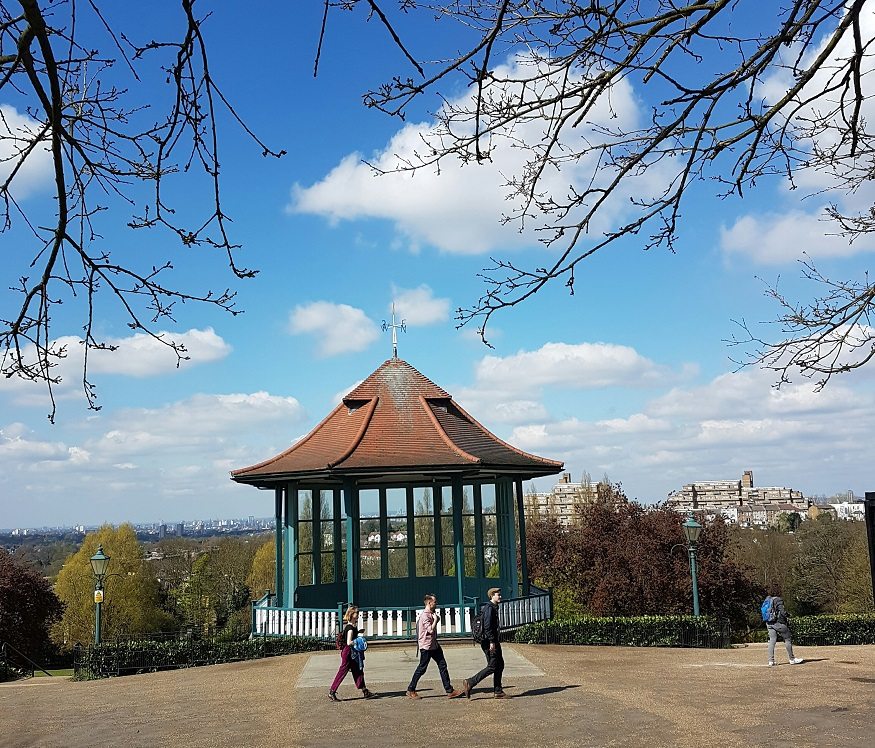 The Horniman is worth the journey to Forest Hill ?@emma.v.martell

The Horniman is one of the best free museums in London and infamous for its ‘overstuffed walrus’, but it also boasts some pretty gorgeous gardens too. Aside from the flowers and ample picnicking spots, the garden also boasts great views, a free petting zoo, farmer’s market and Grade II listed Victorian Conservatory. Well worth the trip down south to the dark depths of Forest Hill! 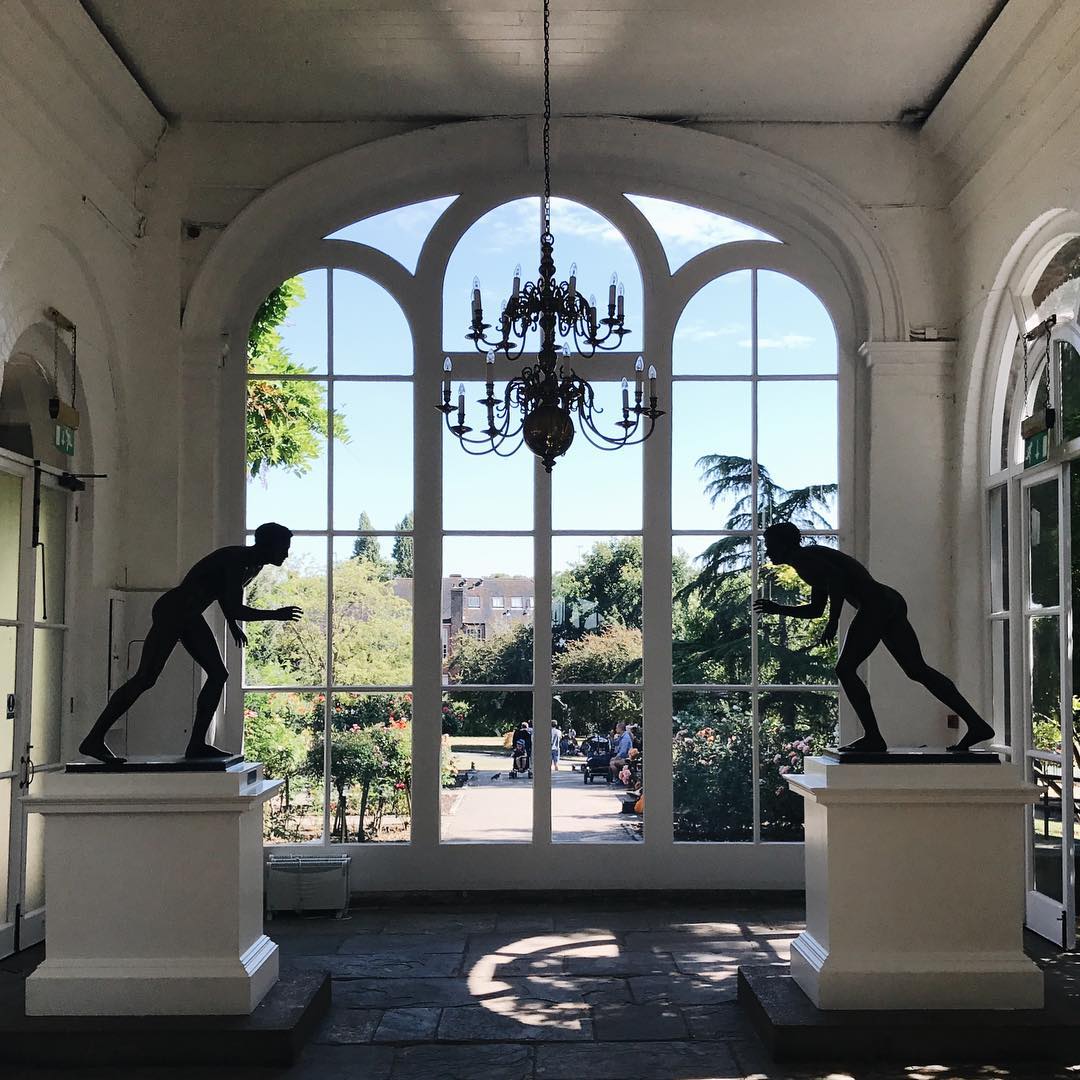 Holland Park is posh with a secret backpacker heart ?@0v7

Whilst most parks in London have pigeons and the odd rabid squirrel, Holland Park has free-roaming peacocks, a giant Koi pond and al fresco opera. Yep, it’s posh AF. But don’t write it off just yet – the park is also the unlikely location for one of London’s best hostels, located in a gorgeous Grade I-listed building in the centre of the park! Regal accommodation on a backpacker’s budget. Other attractions include the giant outdoor chess set, gorgeous orangery and tranquil Kyoto Gardens where you can meditate to the sound of a real-life waterfall.

Can you think of any London parks we’ve missed? Let us know in the comments below