I spent 4 years living in Copenhagen and while I disliked certain aspects of it at times, my fondest memories come from spending summer afternoons and sunlit evenings sitting on the grass at Christiania, watching live music with friends, eating and drinking until making the trip home in the midnight sun. No trip to Copenhagen would be complete without first visiting Christiana. I would go as far as to say that it’s the number one thing to do! It’s unlikely that you will ever find anything like Christiania anywhere else in the world, and if you do, there is almost no chance it will be in the center of a capital city in one of the most progressive countries in the world.

I first visited Copenhagen in 1994, I was a child being dragged around by my parents, but one thing that still stands out from that first big trip away from Australia was walking into the walls of the old army barracks that was by that time known as Christiania. Copenhagen’s “free zone”, I remember seeing massive walls and strange looking people everywhere. Upon entering, it was all long hair, bare feet, laughter, people smoking and drinking, and a strange smell that I could not put my finger on at the tender age of 9. As we walked around inside, it was filled with hobbit-styled houses, graffiti, shoulder to shoulder market stalls selling all kinds of hash and pre-rolled joints, a beautiful lake, dense forest and crazy Danish designed ‘Christiania bikes.’

It was a strangely magical place and not something you can really appreciate at that age. Here’s everything you need to know about Copenhagen’s Christiania: 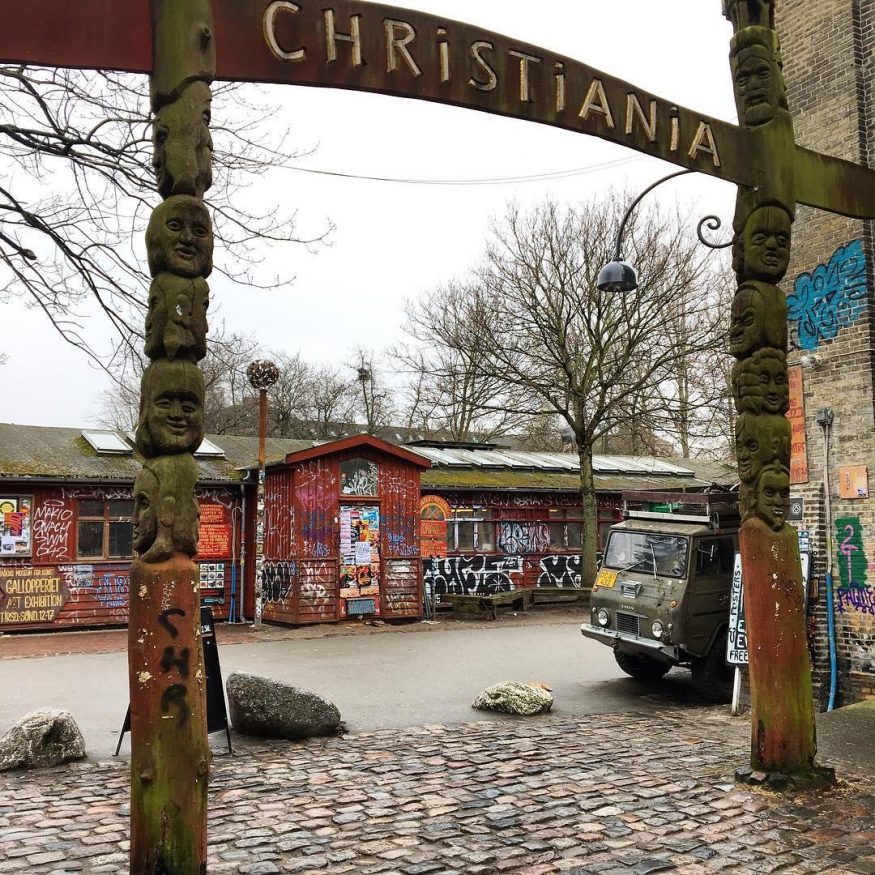 Christiania was originally founded in 1971 by a group of young anarchist/artist type hippies that just marched in and took over an abandoned military base. Crazy, right?! They named it ‘Christiania’ being that it sits in the borough of Christianshavn and they turned it into their own self-proclaimed free zone. As you enter, you pass under a big sign that reads ‘You are now leaving the European Union.’

Originally, it was an area in which anyone could squat for free. Things have been up and down since the founding of the community though, as essentially it is a seized piece of government property with an open-air, soft drug market meaning that naturally, the residents have had continuous run-ins with the government. In 2011 they shut the doors for the first time ever, to come together as a community and talk about what to do. They later reopened with a signed deal from the government to buy back the land at an agreed price of 102 million DKK. For years after the deal, every time you went to Christiania they would have fundraisers or ask for donations until a few years ago when they finally raised enough money.

These days, Christiania is still a place for free loving, young, pseudo-hippies to go and enjoy themselves. Beer is cheap, coffee is cheap and in summer when the sun is out 20 hours a day you will never find the place empty! Hash still plays a major part in the environment there, but it is far less prominent, although you will still find the smell wafting around every corner. 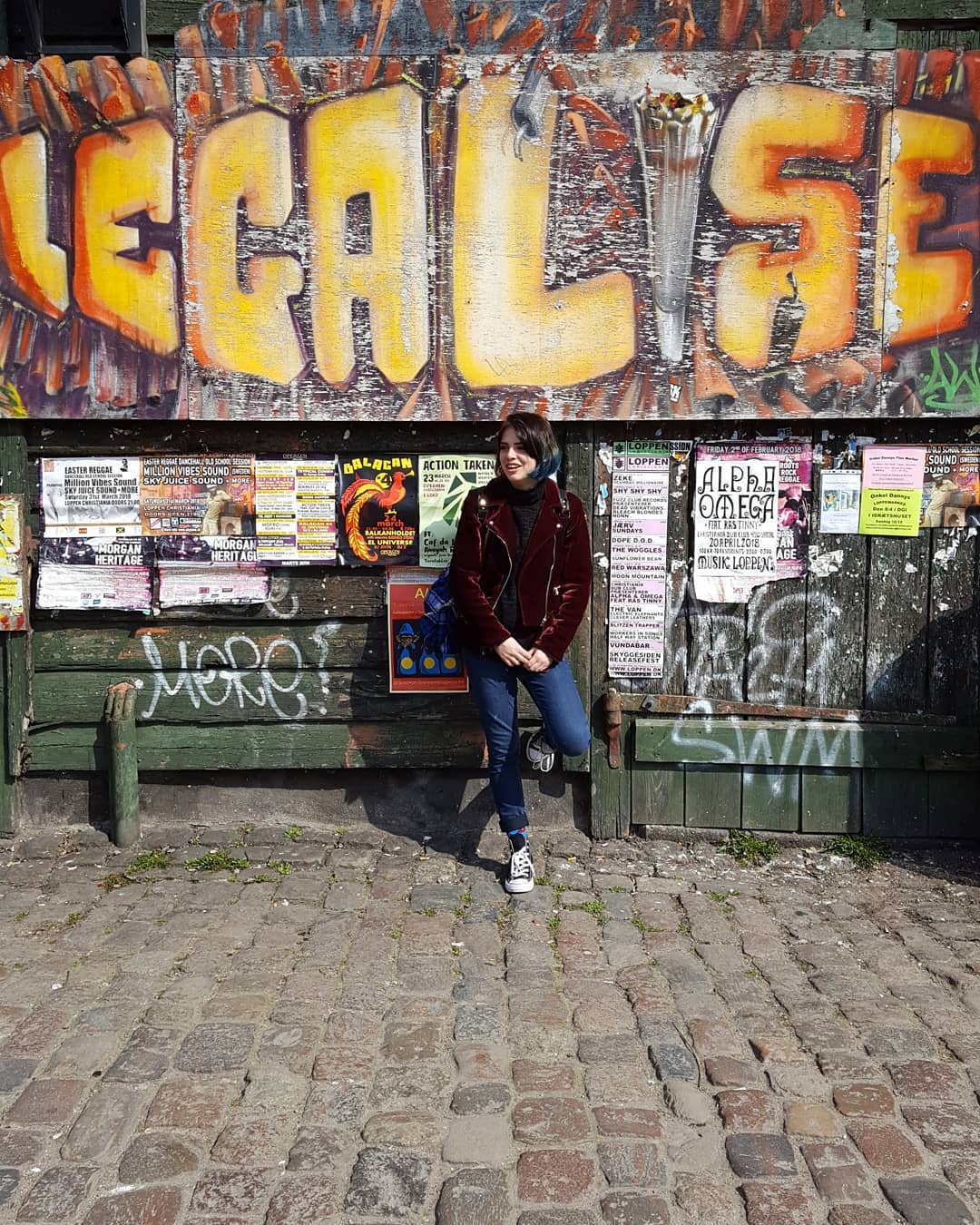 Best things to do in Christiania

There is a free sauna inside of Christiania. If you are not European (or at least European-inclined) you might be a little thrown off by the fact that everyone is naked… especially as it’s a unisex sauna! Coming from Australia, I was not really used to seeing naked women just sitting there ignoring the fact that there were naked men all around them. If you can manage not to stare, and you’re confident enough to sit in a room full of naked people, then this is a super fun experience and truly authentic to the ‘free’ nature of Christiania. In the colder months especially, this sauna is extremely popular. You may need to meet and talk to someone inside Christiania to find this hidden gem. I only found out about it after a year or two of living in Copenhagen.

If skating is your thing, or you just enjoy watching it like almost every one I know, there is an indoor skate park that you might enjoy with a few ramps and hips outside for your enjoyment. Two friends of mine that grew up inside of Christiania constructed the bowl inside, and it quickly became a meeting point for the Copenhagen skate scene. These days, it attracts pros from all around the world. 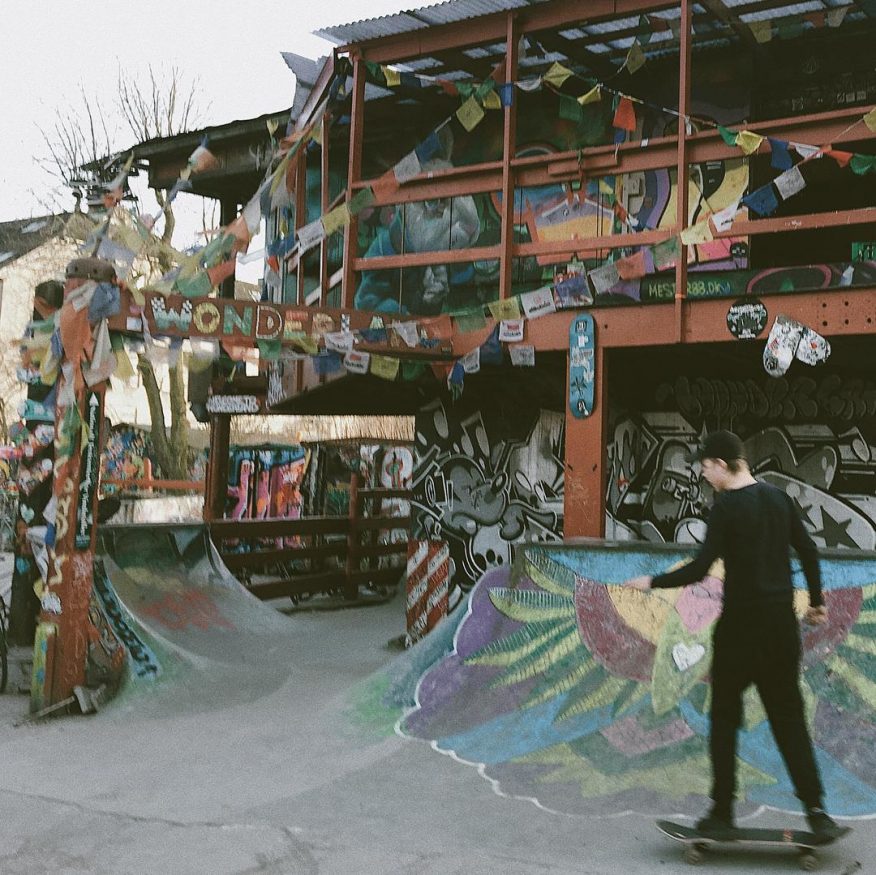 One thing you need to do that is a little hard to really pinpoint is just walk around, find the edge of the lake and follow it, if you see small tracks that look walked on follow them, this will lead you to all the small hobbit styled houses that litter the 85-acre area. Houses of particular interest to me were the one where one entire side was built out of old window frames and windows, the front is entirely filled with cactus and ferns and a host of other plants. Another house had a tree growing straight through the middle of it, and another one that I actually saw in construction  looks like some kind of alien flying saucer! The lake is beautiful as well, people sit, drink, smoke and listen to music. If you are traveling alone, just walk up and say hi. Danish people are pretty reserved especially if you don’t speak Danish, but once you get them talking they are always incredibly warm and friendly.

There are also Christiania walking tours you can take that will explain a little bit of the history to you and show you things you might otherwise miss. 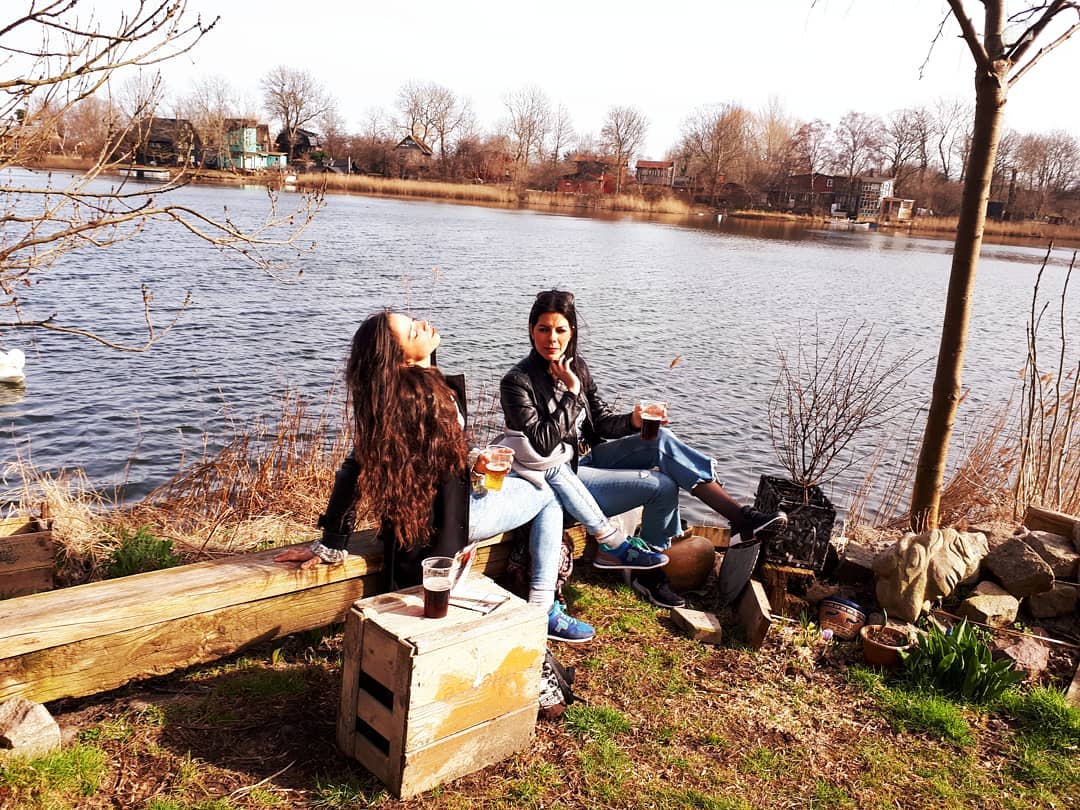 There is live music constantly in Christiania with a string of amazing venues and outdoor locations to see it all. Nemo Land, also a cute cafe, provides two free concerts every Sunday. I have seen everything from open mic freestyle battles to Finnish crust punk, Swedish black metal, and obscure underground euro dubstep.

Loppen, a live music hall, is normally pretty alternative but some really big names in hip-hop and rock have played here also.

The Grey Hall, or Den Grå Hal as it is known in Danish, is another big venue inside of Christiania which has hosted a huge amount of massive names from Bob Dylan to Metallica and Rage Against the Machine… (just to name a few!) As well as this, they have other free concerts on and off all summer long where you will find massive amounts of people just hanging out on the grass enjoying the weather and live music. 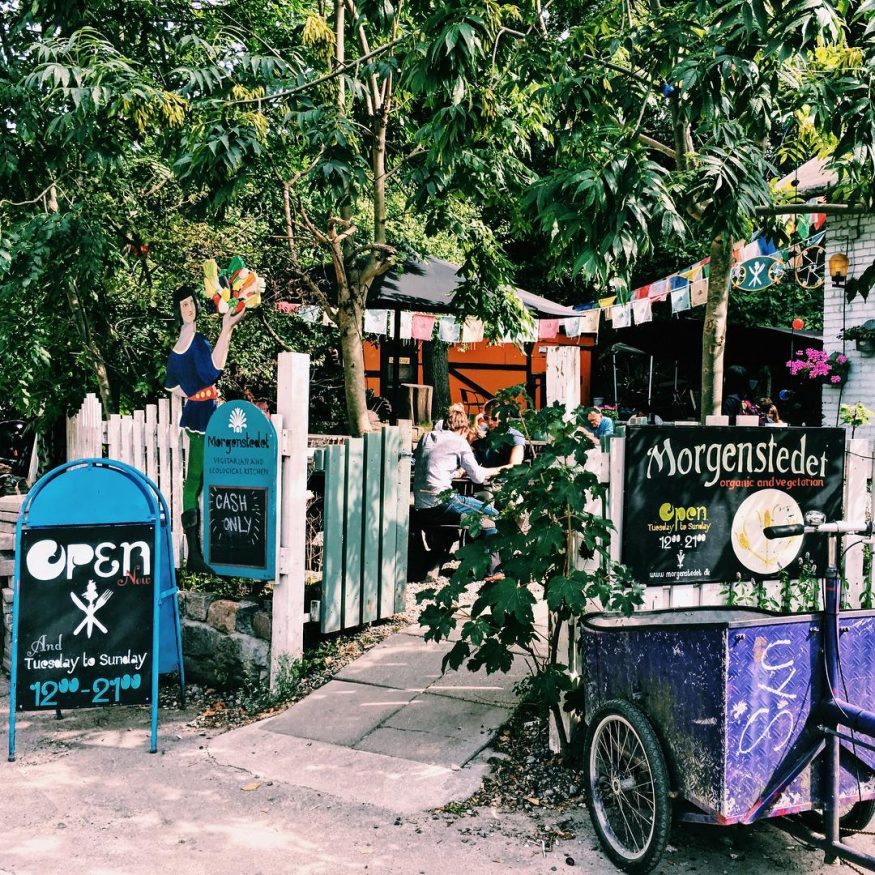 Here are some of my top suggestions for where to eat in Christiania:

Morgenstedet: is an organic vegetarian cafe that was personally my favourite place to eat in Christiania.

Spiseloppen: Probably the most multicultural place you will ever eat in, between the chefs, the waiters, and the customers you can easily hear 10-15 different languages being spoken. The food constantly differs but if you are so inclined there is at least one vegetarian meal on the menu every night.

Cafe Månefiskeren or moon fisher is another cute cafe with cheap coffee, pool tables, toilets (which can be hard to find in Christiania) and an outdoor seating and garden area which is also used for more live music during the summer time. 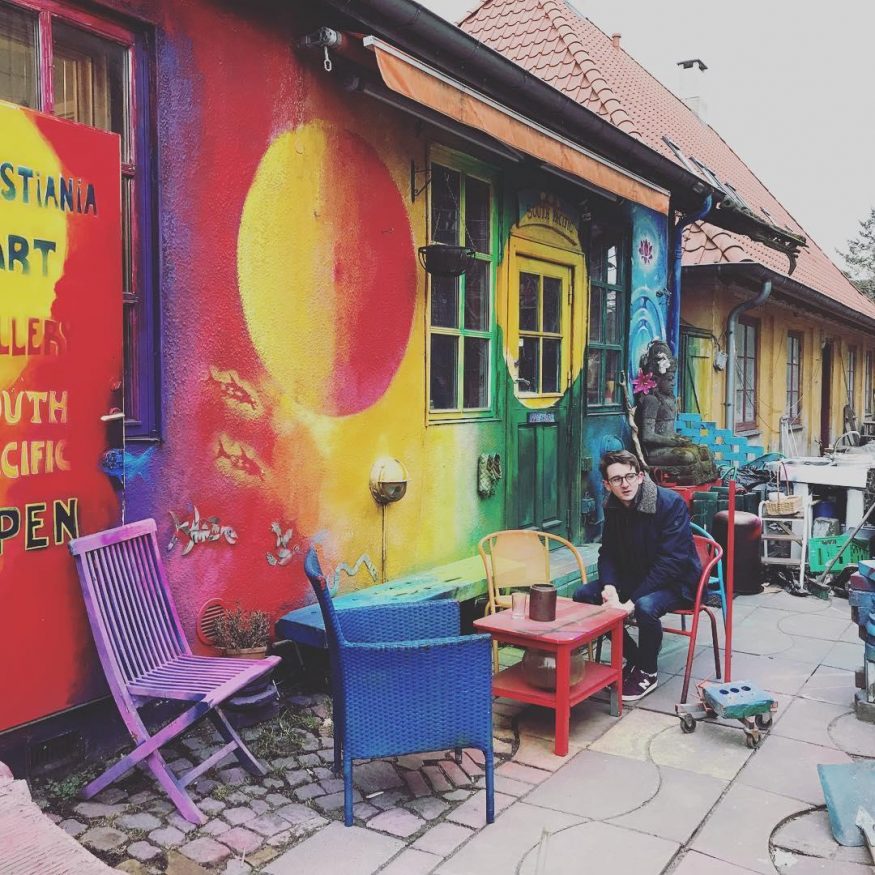 Like any city, your experience there can be made or broken by interactions and experiences. Some people love a city that other people absolutely hate due to interactions with people or lack of things to do, cost of things or difficulty to get around and see things. I understand when people say they hate London or L.A or Rome (I don’t always agree but I get it) but I could never imagine anyone saying they hate Copenhagen. It can be expensive at times but the city is small so getting everywhere is super easy, not to mention you can rent bikes from the city from over 100 locations that are pay as you go. If you are going to be there for a week or more, I would suggest getting a subscription. Each bike has a touch-screen and GPS showing drop off stations and locations around the city. For about 4 euros an hour, you can rent one or you can buy prepaid packages. 65 euros will get you 100 hours of riding time which is way more than you will ever need. It takes about 45 minutes by bike to get entirely from one end of the city to the other and if you are just visiting you will never have any reason to go that far.

Check out these hostels in Copenhagen

Dane Faurschou is a photographer, surfer and traveller from Byron Bay, Australia, who splits his time between the ocean and the mountains. Currently, he’s driving from Canada to Patagonia to search out as many waves and mountains as possible and anything else in between. Follow his adventures on his blog, Instagram and Facebook. 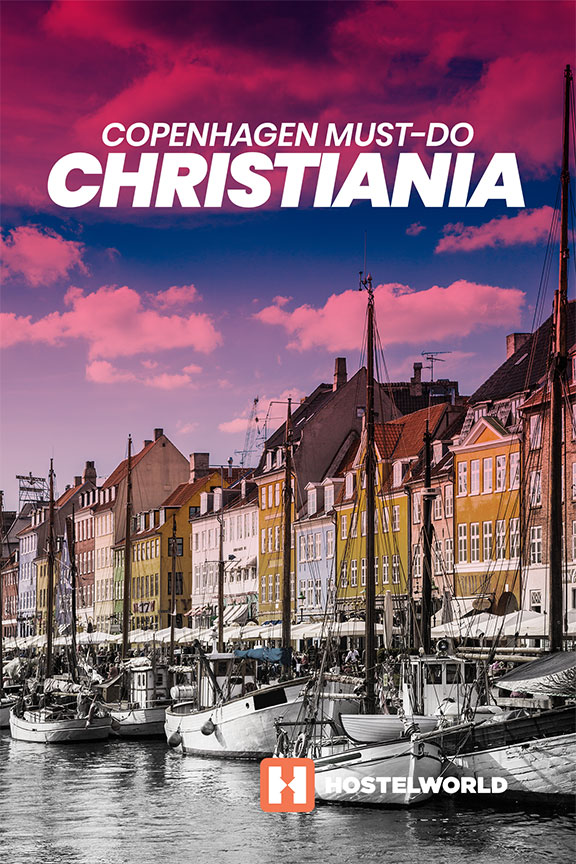