Bolivia often gets overlooked in grand backpacking trips around South America. It doesn’t have as many mainstream attractions as the bigger countries, but this can really work to your advantage if you want to visit somewhere with less tourists and more authentic experiences. I travelled around Bolivia with two Spanish speaking companions, so I got to experience some of the best places to visit in Bolivia, and also some of the most obscure! Have a read for my run down of the top places to visit in Bolivia, the enigmatic stop on the South American backpacking route. 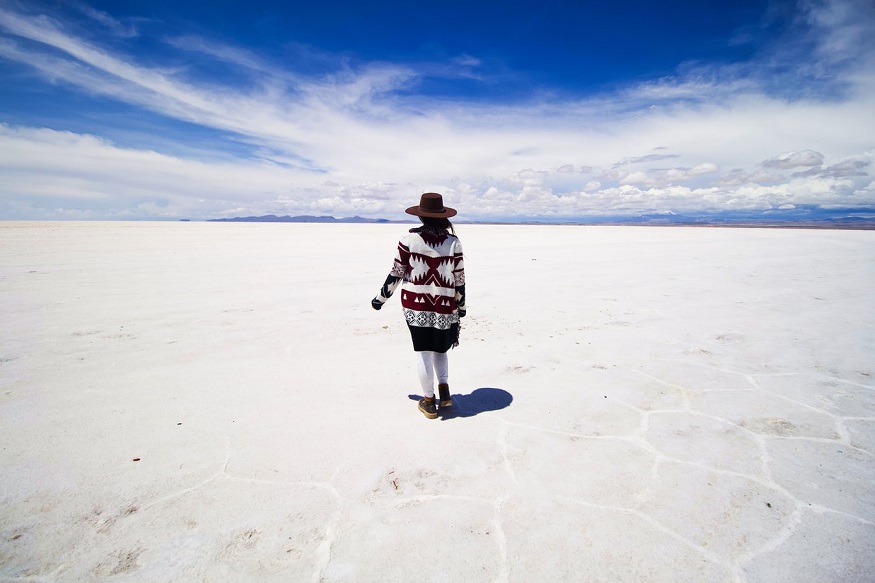 We’ll begin with the biggest attraction in Bolivia, which is, of course, the salt flat of Salar de Uyuni. It’s an absolute must-see and one of the best places in Bolivia – sometimes people will travel to the country as an extra stop on their South American tour specifically to see this amazing expanse of land – and for good reason!

Salar de Uyuni stands near the border of Chile and leads on into the national park, but it deserves a spot on this list on its own. It’s one of the most surreal sights in the world, consisting of a vast plane of salt stretching for miles and miles in every direction. In the rainy season, a few centimetres of water lies on the top, turning the salt flats into the world’s largest mirror (129 kilometres across).

Do your research and don’t just go for the cheapest tour – I’ve heard horror stories of groups getting stranded when their cars broke down in the middle of nowhere and they lost the whole day. Trust me, you’ll want the daylight to take photos! I’m pretty sure it’s impossible to take bad photos there, but if you want to go the extra mile, I saw several people who brought multiple beautiful outfits specifically for photo-taking. Only for the most dedicated of Instagrammers! Make sure your camera or phone has enough battery, because you’ll definitely want to remember this beautiful but strange salty dreamscape… 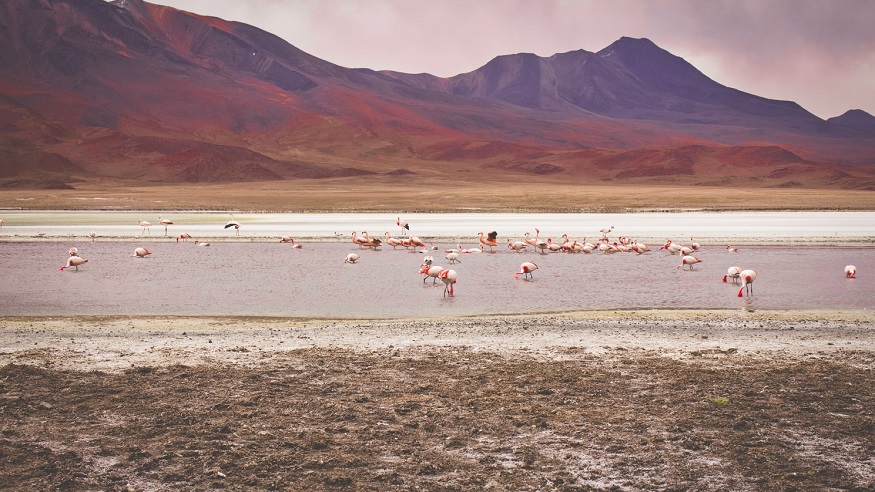 Backpackers travel to the national parks surrounding the Southern desert town of Uyuni for the sights of the salt flats alone. But if you book a three-day (or more) tour from Uyuni, you’ll be rewarded with many more incredible views on top of the epic salt flats. Get ready to see volcanoes, mountains and vast expanses of desert, and prepare yourself for a range of climates as you drive more than 11,995 feet above sea level. If you have your wits about you (and a steady hand), you can wade through the bogs around some of the region’s lakes to capture a photo of the flamingos who settle there to rest and feed. It’s well worth extending your tour of the salt flats to include more of the best natural wonders in Bolivia. Don’t miss out! 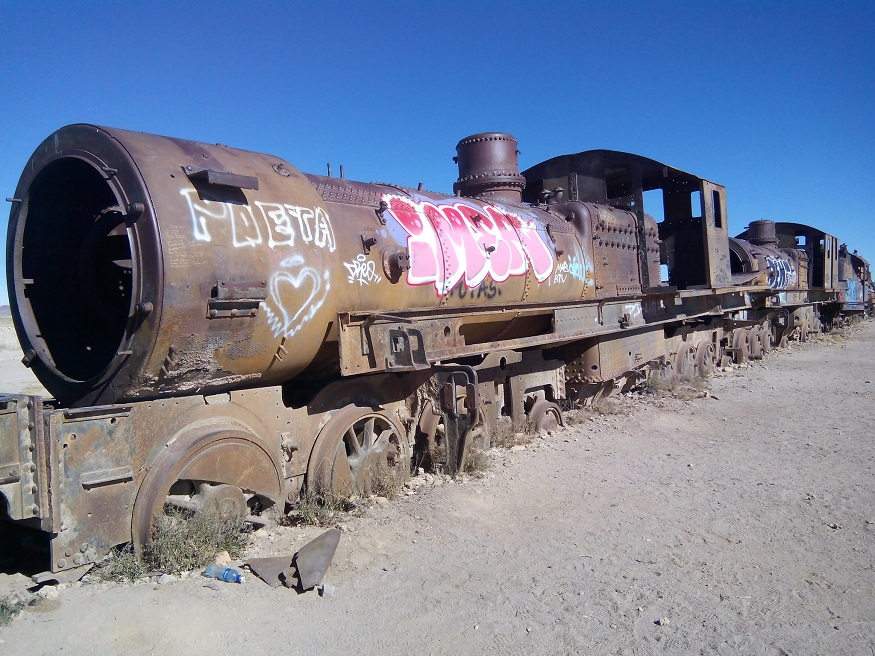 Even if you only have a short time to backpack Bolivia, make it a priority to see this surreal sight. If you travel a few kilometres outside of Uyuni town centre, you’ll find an eerie setting known as the train graveyard. Once used as transport to the Pacific Ocean Ports, it’s now pretty much what it says on the tin. Thanks to South America’s relaxed security measures, the train graveyard is also a playground, and another amazing photo opportunity. Climb all over the trains as much as you like – just be careful if you haven’t got your tetanus shots yet!

Moving on from the more well-known stops on this list, some of the more unusual places to visit in Bolivia include the Ojos del Inca, where you’ll find a lagoon about an hour’s drive from Potosi. You can get a bus from Mercado Chuquima for 5 Bolivianos.

It’s a natural spring which sits in a valley surrounded by some of the most beautiful mountains I saw during my time in Bolivia. Remember to bring money if you want to swim in the manmade pool of the same water – the natural spring itself isn’t safe as it’s far too deep and has a strong current. You must pay the locals who live there. It’s an experience for sure, as the cold wind whips about you and you soak in the hot waters. It gets very cold here, so make sure you bring a jumper for when you eventually need to get out and return to the city. The buses come every hour or so, so time your departure well and you won’t have to wait (but you’ll have to flag them down so make sure you’re visible and dry-ish by the time you board). 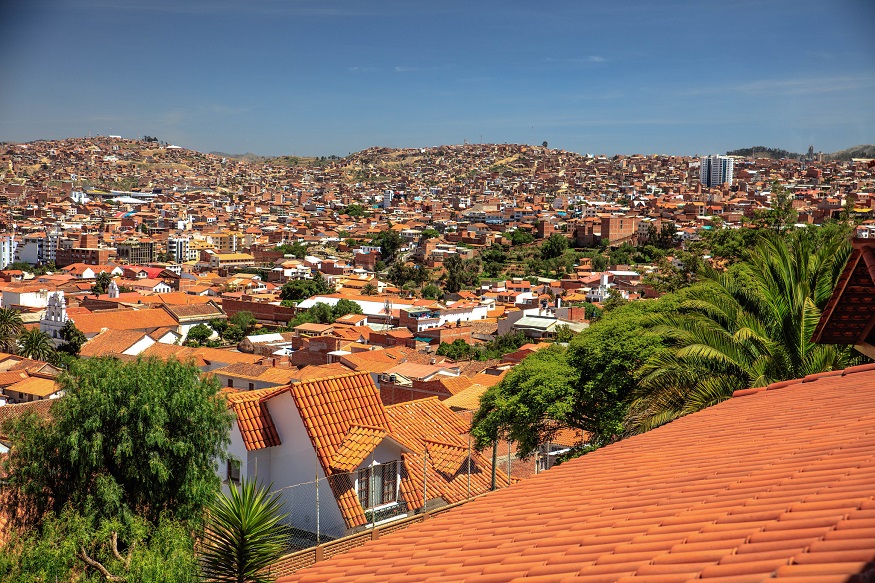 Most of the cities in Bolivia are less impressive than the country’s incredible natural settings, but this isn’t so with Sucre. Bolivia’s capital city is by far its most beautiful metropolis. It’s full of white stone architecture and parks – a really great place to wander around aimlessly. There are beautiful churches to look at, as well as the National Library. The bars and clubs in Sucre are some of Bolivia’s best – so take some hostel mates and check them out! Our hostels in Sucre will have you feeling like a local. Villa Oropeza Hostel is right in the city centre! 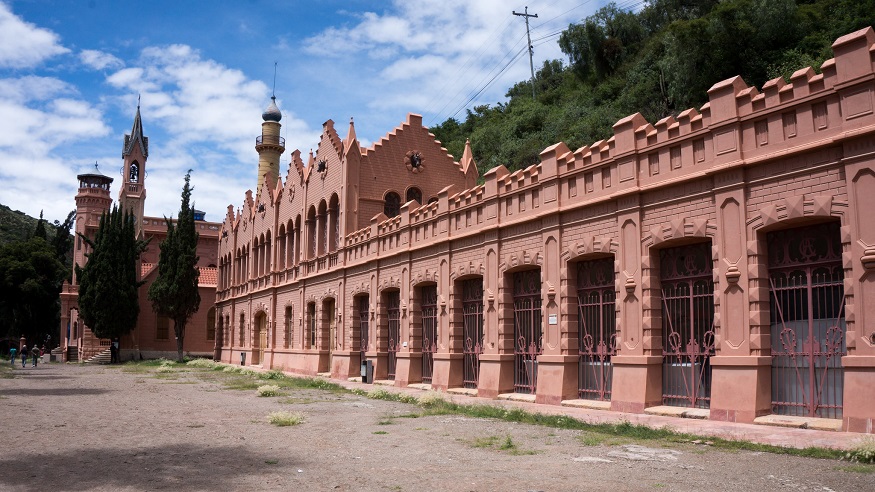 Another spot that’s less known and is perfect for escaping the bustle of Sucre is the pink fairytale castle, La Glorieta. It’s worth the twenty-minute (and 15p!) bus ride (the number 4 from Sucre) to spend an afternoon wandering around this beautiful palace. With a cheap entry fee (£2), it’s an unusual place to explore as it housed Bolivia’s only prince and princess in the late 1800s, so it seems like a place stopped in time. It’s beautifully built and you can learn all about the philanthropic and beloved couple on your visit. All the signs are in Spanish, so bring your dictionary and get ready for a challenge!

This jungle-side town is VERY out of the way. It may not even show up on some maps – so this one’s for the most dedicated backpackers! To visit, you’ll have to take a four hour coach from Cochabamba and get ready to sweat, as it’s one of the most humid places I have ever been. There aren’t many attractions here, other than an animal rescue park, and it’s a very small and rural town so don’t be surprised if you can’t get internet!

I’d recommend getting a taxi out of town to the Lena Verde park for a guided tour around some of the weirdest and wackiest jungle plants you can find in this region. You can also camp in the park, which is an ideally rustic way to experience this natural wonder. It’s the perfect place to be if you enjoy wandering aimlessly around in nature and wading through random rivers (although you should definitely take your shoes off first… some of them get very deep very fast, which I found out the hard way). The best hostels in the region are back in Cochabamba. Jaguar House offers free breakfast and is located centrally downtown.

The biggest city in Bolivia, La Paz is a must-visit for city lovers, with a booming foodie scene, a proud indigenous heritage and the world’s largest cable car system that’ll take you soaring over rooftops. But even if you’re not an urban-dweller, the Valley of the Moon is well worth a visit. Tickets into this beautiful natural wonder cost the equivalent of £1.50. It’s a bunch of rocks in strange formations which look like the surface of the moon. It makes a great spot for gorgeous photos and quiet contemplation, as long as you avoid the entertainers in traditional costume get-up who bounce around for donations. Unless of course you want a bit of fun, in which case it’s also a pretty good place to have a laugh with your mates as you pose in front of the rock formations. Why not stay in one of out hostels in La Paz? Selina La Paz is stylish, modern and in a great location. 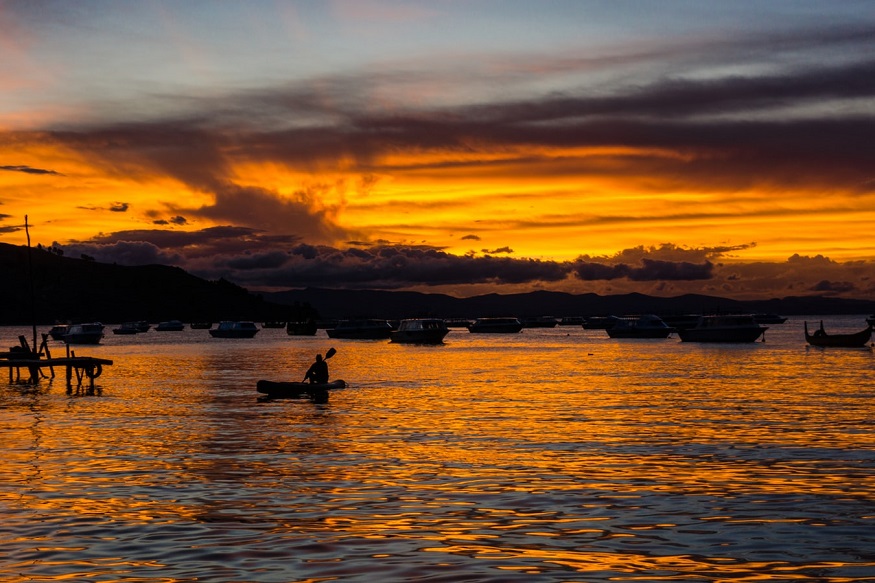 Lake Titicaca is known as one of South America’s most spiritual destinations, as well as being the highest navigable lake in the world. Make sure you’re accustomed to the altitude before you travel to this place of spiritual and natural beauty. To access the lake from Bolivia, travel to Copacabana and then on to the Islands of the Sun and the Moon for a truly magical day out.

The town is also a good place to observe some of the rituals which are common for people of the Andes, especially at the beginning of February, when the residents of this little lakeside town celebrate the festival of Our Lady of Copacabana, or Virgen de la Candelaria – the Dark Lady of the Lake and the Patroness of Bolivia. This is a place where lots of spiritual and religious groups from all over the continent go to visit as well, so it really is a special place of pilgrimage. Check out the hostels in Copacabana that provide stunning views of the lake. 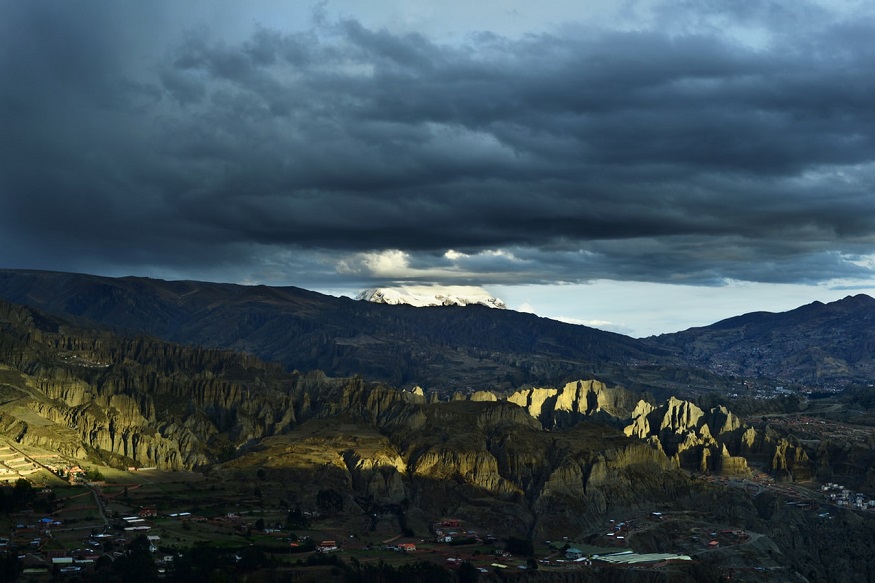 The mountain which overlooks the city of La Paz has a female spirit, say the shamans who live there. She has a magical presence and it’s worth travelling to the heights of La Paz, El Alto (the sub-city of La Paz where the airport is), to get a good view and bask in the glory of this mountain which is worshipped and prayed to by many of the city’s residents. It’s a great place to look out over the view of the city as well, not to mention a killer photo opportunity. Take the Teleferico up to see more of the city as it spreads out beneath you in the impressive cable car. Just wrap up warm, it gets chilly up there! 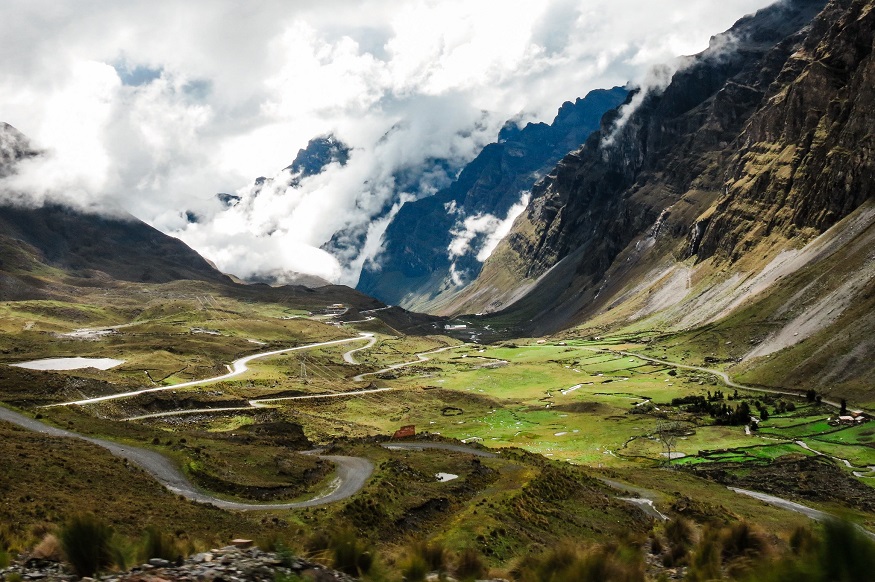 This cliffside highway (high being the operative word here) is a definite must for any adrenaline junkie. Officially called Yungas road, it’s infamous for being considered the most dangerous road in the world. Built during the Chaco conflict in the 1930s, it aimed to connect La Paz with the Amazon, right to Coroico. Now it’s mostly used by cycling tour groups as a safer road has since been built, but you might occasionally see a car or truck using it to try and get somewhere remote. Most do it by mountain bike – research the company you use before pitching up expecting to rent a set of wheels! Day tours start from around US$80, and you’ll also need insurance too. Be warned, this road is incredibly dangerous – it earned its name for a reason.

I hope this article has given you an insight into some of the places you should definitely travel to if you’re planning on visiting Bolivia. From the main attractions to the most under the radar places, this list should give you enough inspiration to start planning your Bolivian adventure. I’d highly recommend a visit to this beautiful and mysterious country if you’re up for unforgettable adventures that you can’t have anywhere else on earth. Check out our hostels in Bolivia to make your adventure even better!

🌟 The ultimate guide to backpacking Chile

🌟 8 things I learnt as a solo traveller in South America

Rosie Esther Solomon is an English Literature graduate from the University of Birmingham who spent five months travelling around South America – and feels as though she barely scratched the surface! Other than travelling, she enjoys spoken word poetry, pole dancing and being a feminist killjoy. Find her @rosiees7 on Twitter and Instagram for bad jokes and pole photos, and at thebechdelbitch.com for travel blogs and feminist film reviews.