Nestled between Thailand and Vietnam, Cambodia is an essential stop on any backpacking adventure around South East Asia, with a huge array of attractions and truly unique Khmer culture. Food lovers can fill up on fragrant dishes in busy cities and pretty towns across the country, while beach bums are spoilt for choice when it comes to tropical islands to laze around on. Love a bit of history? There are no shortage of heritage sites, from ancient Hindu temple complexes to royal palaces and poignant museums which document its harrowing history. If you want the lowdown on the best places to visit in Cambodia, you’re in the right place.

Cambodia has only really started to open up to travellers in the last two decades, following a period of civil war and political instability in the 70s and 80s. This means there’s heaps to discover and the locals couldn’t be more welcoming. Ready to start exploring? Let’s go! 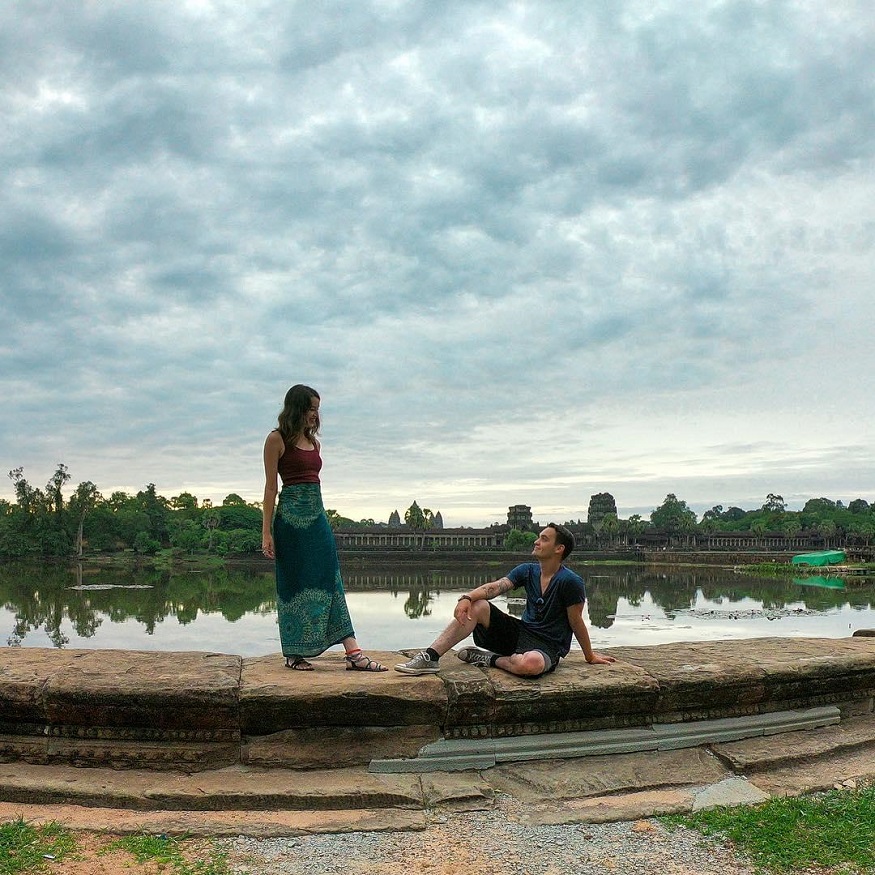 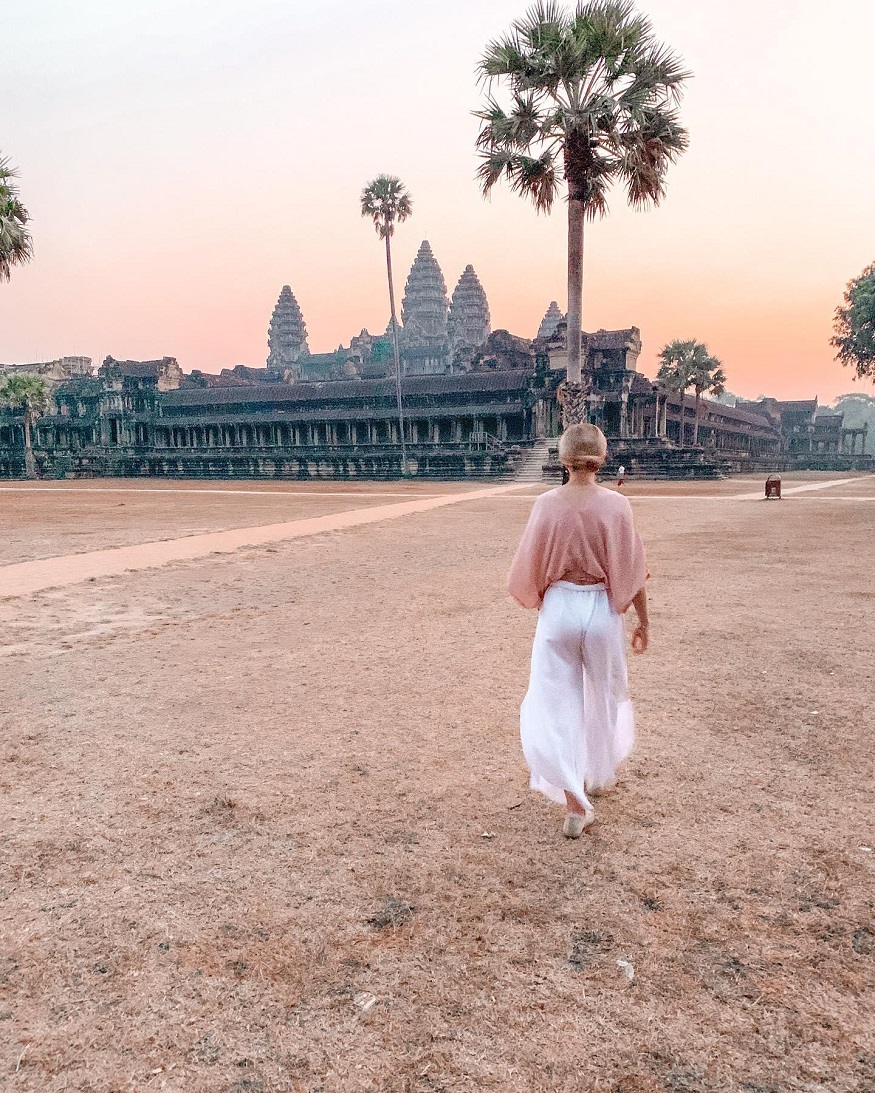 The incredible temples at the UNESCO World Heritage certified Angkor Wat Archaeological Park should be top of your Cambodia backpacking itinerary, even if you’re the type of traveller who prefers staying under the radar. Rising up from lush jungle about 15 minutes by car from Siem Reap, the area’s crumbling structures date back to the days of the Khmer Empire and form the bare bones of Cambodia’s 12th century capital city.

The crowning jewel is Angkor Wat, the region’s most famous temple and also the largest religious structure in the world. If you can, book a private car or tuk tuk tour in advance (go with one recommended by your hostel) and aim to arrive before 6am to see the sun rise over the temple’s towers. Other must-see temples in the park include Ta Prohm, with giant trees growing through its ruins, and Bayon that’s recognisable for its multiple Buddha faces.

There are also numerous smaller temples across the 400 square kilometre park, including quieter Banteay Srei that sits 25km north of Angkor Wat. The small, red-hued temple dates back to the 10th century and is magnificently decorated with intricate carvings and statues. 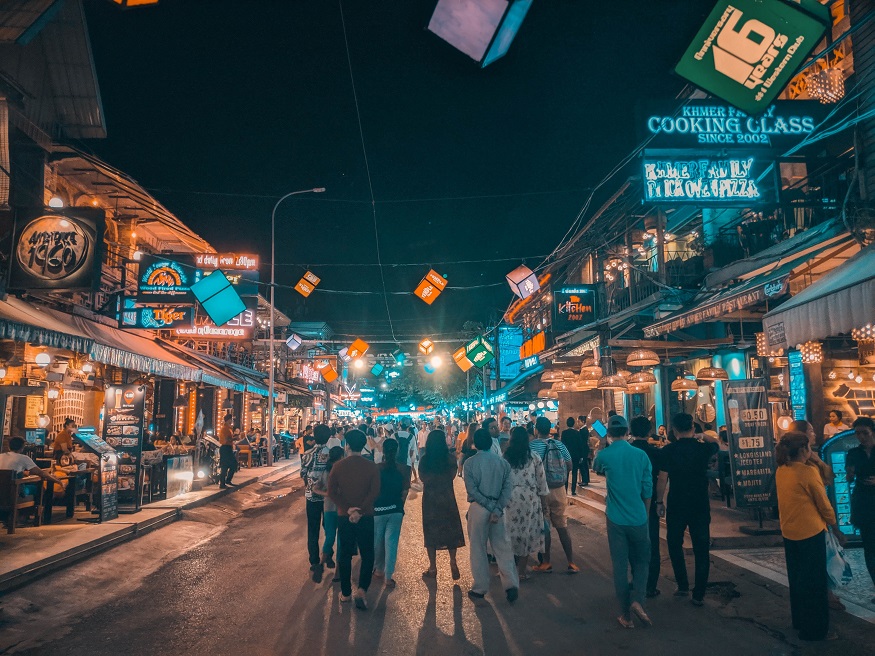 Siem Reap is both the jumping off point for excursions to Angkor Wat and the city where you’ll have some of your most epic nights out!

Pub Street, though busy and touristy, is an essential part of the Siem Reap experience. It’s where you’ll find a mix of lively nightclubs, cheap bars serving up drinks by the bucketload (literally) and dozens of rustic restaurants where you can try things like delicious Khmer BBQ.

The small city is also packed with buzzing markets selling everything from spices to elephant print trousers – just steer clear of some of the more extreme street food stalls if you have a sensitive stomach! Those with time to spare might want to check out the Angkor National Museum to discover more about the region’s ancient culture.

If you’re searching for somewhere to enjoy some R&R after an early morning expedition to Angkor Wat or a heavy night out on Pub Street, Siem Reap has some first-rate hostels. The Twizt Lifestyle Hostel has beautiful décor and an insane rooftop pool, while Cozy Cloud Backpackers Hostel has an awesome chill out area complete with squashy beanbags.

Check out all of our hostels in Siem Reap 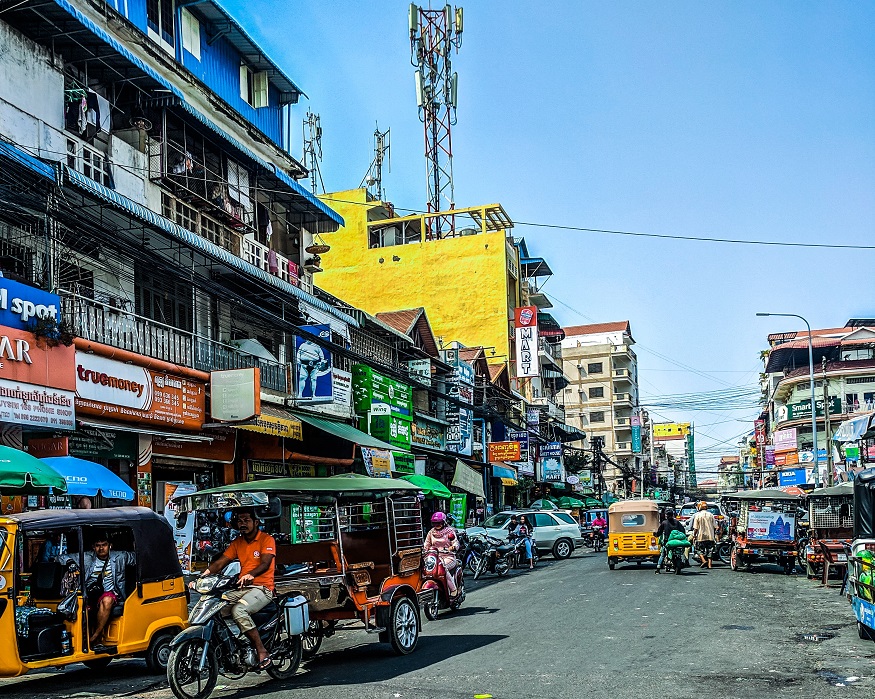 Cambodia’s capital is surprisingly cosmopolitan and has some truly stand-out eating and dining options – think Insta-perfect cafés, chic cocktail bars and swish eateries serving up classics like amok (coconut curry) in addition to innovatively prepared insects (the locals love them).

Phnom Penh is found on the banks of the Mekong, making it a prime starting point for river cruises north to Siem Reap or south into Vietnam. You’ll find the majority of the city’s attractions in the central Riverfront district, including the Royal Palace and Wat Phnom (a 14th century Buddhist temple). It’s also a good area for foodies and you’ll likely spot French-style bistros sitting alongside quirky Cambodian fusion restaurants. Phnom Penh’s café scene is phenomenal – try picture-perfect Artillery Café on St 244 for plant-based Poke bowls, and social enterprise Sugar & Spice Café at Preah Sisowath Quay for brunch.

No matter how long you decide to spend in Phnom Penh, a visit to the Tuol Sleng Genocide Museum is essential. The building was used as prison during the country’s Khmer Rouge Regime and is now an incredibly moving museum. Most people combine a visit with a trip to Choeung Ek (AKA the Killing Fields), another remnant of Cambodia’s recent tragedies that was turned into a memorial in 2005. A more cheerful day trip idea is Koh Dach, a peaceful island upriver which has a booming silk industry.

There are loads of hostels in Phnom Penh and they’re very wallet-friendly. Chill out at sundown at Onederz Phnom Penh’s tiki-style rooftop bar overlooking the river, or enjoy a taste of home at Lovely Jubbly Villa whose restaurant stocks foreign beers and serves a decent full English breakfast.

Check out all of our hostels in Phnom Penh 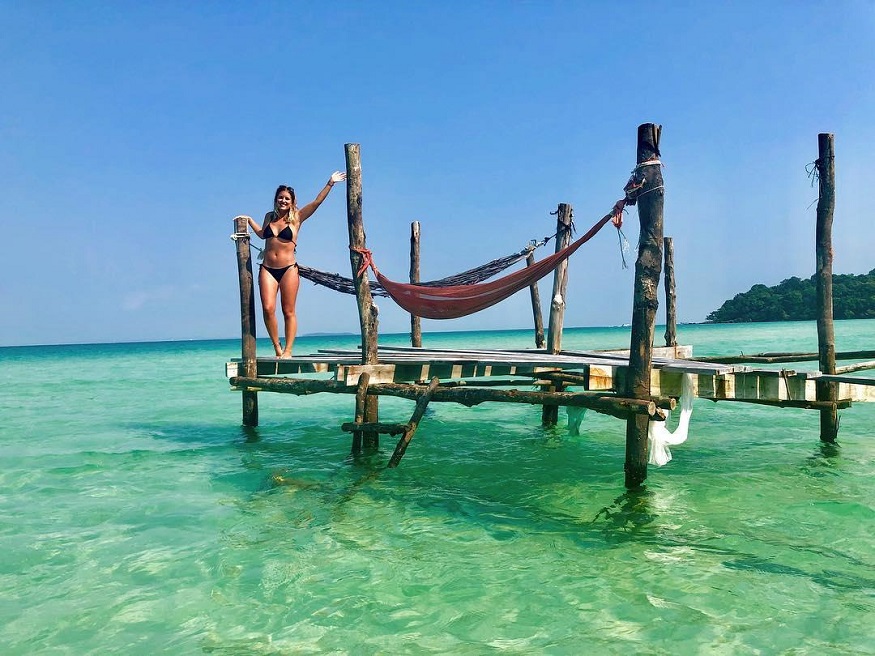 After Siem Reap and Phnom Penh, Sihanoukville is Cambodia’s most visited metropolis. If you’re picturing traffic-clogged streets and packed pavements, you’re off the mark as it’s much more chilled out.

While Sihanoukville does have a tackier side to it (cue casinos and copious souvenir shops), it’s also blessed with five or six beaches and several awesome drinking holes where you can party right on the sand. Lively Serendipity Beach is a backpacker favourite, especially for those about to head to the Southern Islands. Otres Beach on the southern edge of the city is a lot more relaxed and perfect for scuba diving adventures.

Not a beach person? A cookery class might be a better fit and you’ll find no shortage of them in Sihanoukville. Learn how to whip up your own Khmer feast at Tastes of Cambodia or book onto a day course at the Don Bosco Hotel School. Come nightfall, enjoy a tranquil snooze at quiet Mangroves and More in Otres Village or stay closer to the action at Onederz Sihanoukville a few minutes from Tola Street (ideal for nights out).

Check out all of our hostels in Sihanoukville 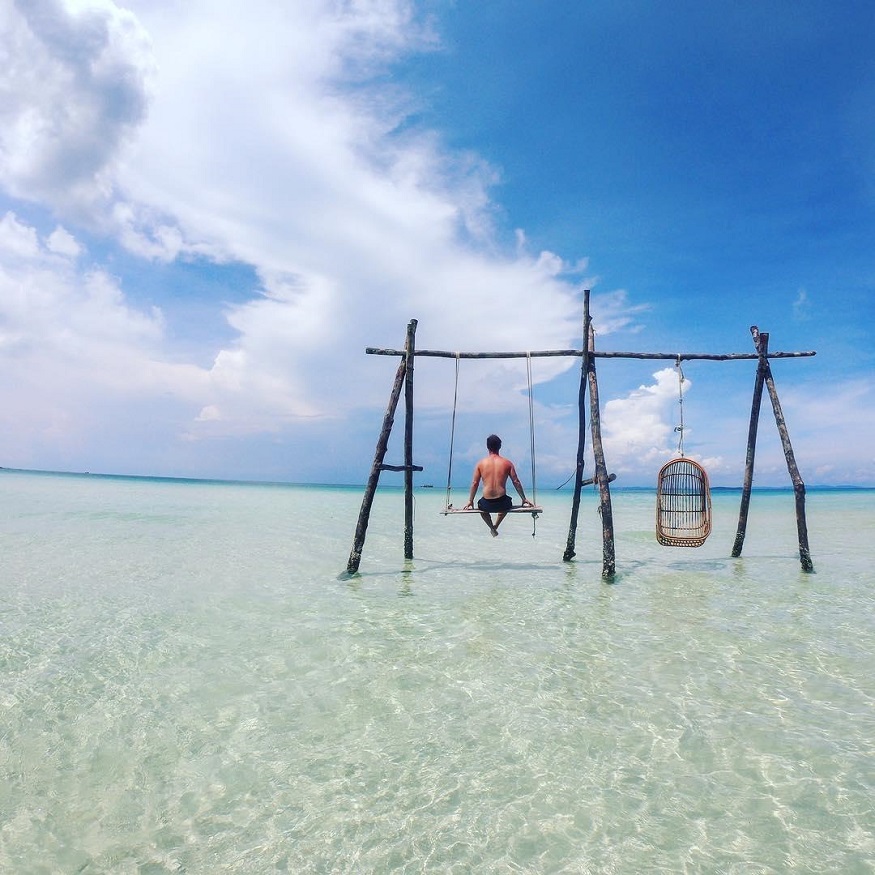 Island life more your thing? Cambodia is blessed with a handful of idyllic isles on its south coast which not only have tropical vibes in abundance, but also their own unique personalities.

The largest and most popular island is Koh Rong, a haven for those after an experience similar to Thailand’s party islands. Koh Tuch beach and 4K beach on the south eastern side are thronged with ramshackle beach bars and cheap and cheerful hostels like Nest Beach Club that’s literally metres from the ocean. Keen to complete a ‘full moon party’? Nearby Police Beach hosts them every month, as well as all-night raves on Wednesdays and Saturdays.

Neighbouring Koh Rong Sanloem is smaller and a little less rowdy, making it a good pick if you’re after a balance of sun, sea and cocktails. For something even more low key, tiny Koh Ta Kiev is a good option. It’s charmingly underdeveloped and the perfect place to switch off and do nothing but swim, sunbathe and snooze. Note that all three islands have no ATMs, so take plenty of cash with you. 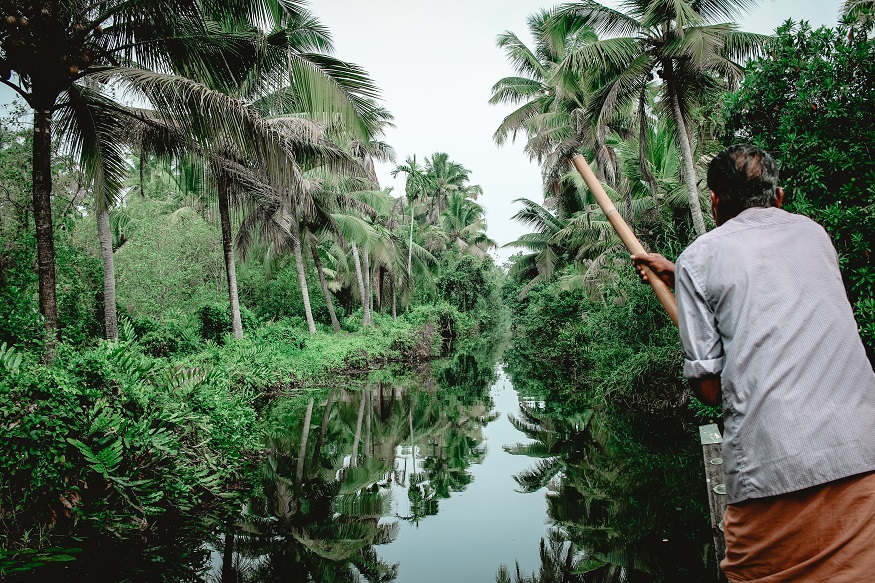 Beyond the cities and temples, Cambodia also has stunning, untouched scenery in shedloads. The Cardamom Mountains in the north are home to the largest rainforest in South East Asia and are the natural (and currently protected) habitat of numerous endangered species such as clouded leopards, Asian elephants and sun bears.

Those who love the great outdoors and can’t resist fitting in a trek during their travels will want to make a beeline for these peaks. Many companies organise guided walks through the jungle, plus there are numerous opportunities to get involved with community conservation projects, including wildlife rehabilitation and release programmes.

The Cardamom Mountains are quite remote, so you’ll need to stock up on any essential medications (and insect repellent!), wear sturdy walking boots and be prepared to camp or stay in a local homestay. 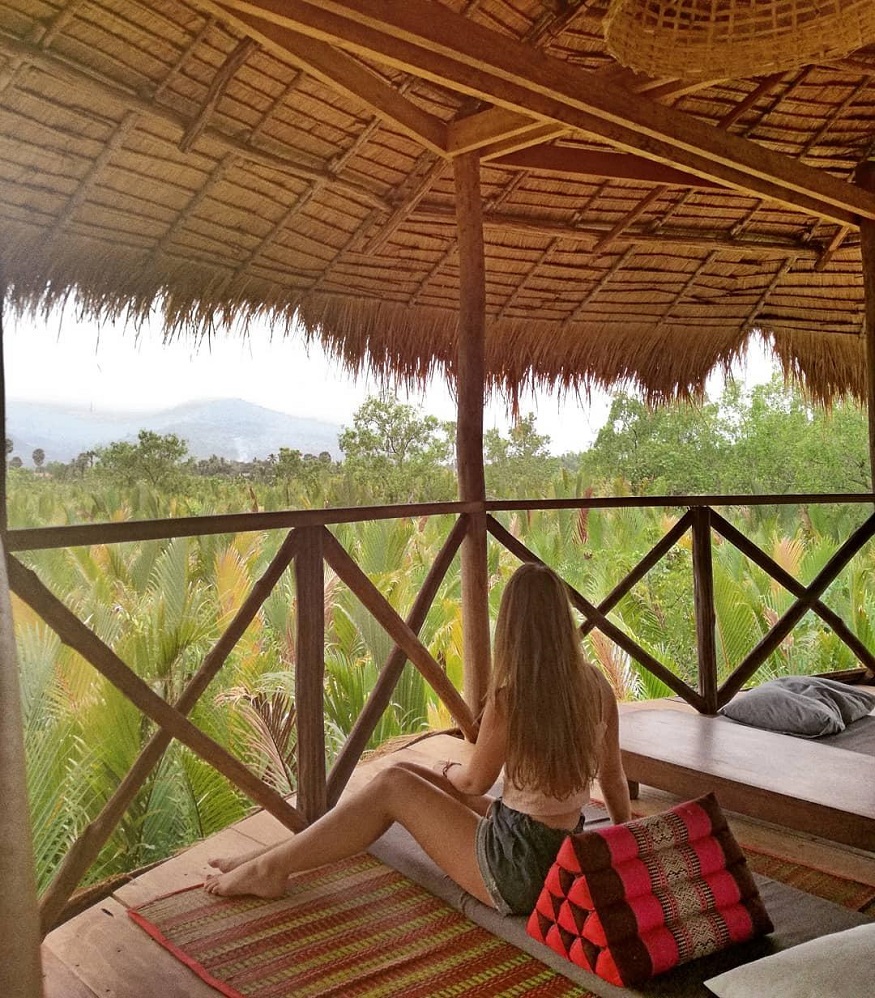 Kampot is a prime spot for those after some peace and quiet. The sleepy oasis near the south coast is surrounded by paddy fields, salt fields and farms growing the region’s most famous crop – peppers! The architecture is particularly unique here too, a real throwback to Cambodia’s days as a French colony.

If you’re after a combination of beach time, cultural trips and culinary treats, Kampot really delivers. The Phnom Chhngok Cave Temple 8km from the town is the area’s most visited attraction and will see you descending down 200 steps into a huge cave to awe at a remarkably well-preserved, 1300-year-old temple.

Kampot may be a lesser-known location, but you’ll still find decent hostels (Kool Kampot has nice private en-suite rooms) and dozens of delicious places to eat. Foodies will want to put time aside to visit one of Kampot’s pepper plantations. La Plantation offers free tours and has two restaurants onsite where you can try dishes made with their organic peppers.

Check out all of our hostels in Kampot 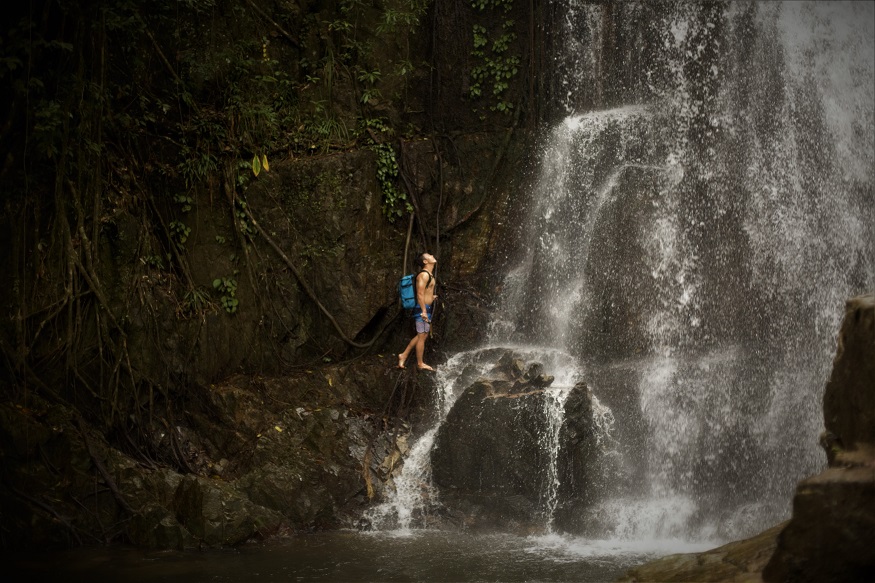 Right on the border with Vietnam, the Mondulkiri Province is one of the best regions in Cambodia for those interested in eco-tourism. Time really does seem to stand still here. The majority of the Mondulkiri is still thick with untouched, mountainous forest, while the only inhabitants are its indigenous hill tribes.

Most visitors stay in homestays when visiting Mondulkiri, however there are also accommodation options in Sen Monorom, the province’s principal town. You can usually arrange for a tuk tuk to take you to nearby attractions like the Bai Chow Sea Forest which has a spectacular viewpoint at its summit. 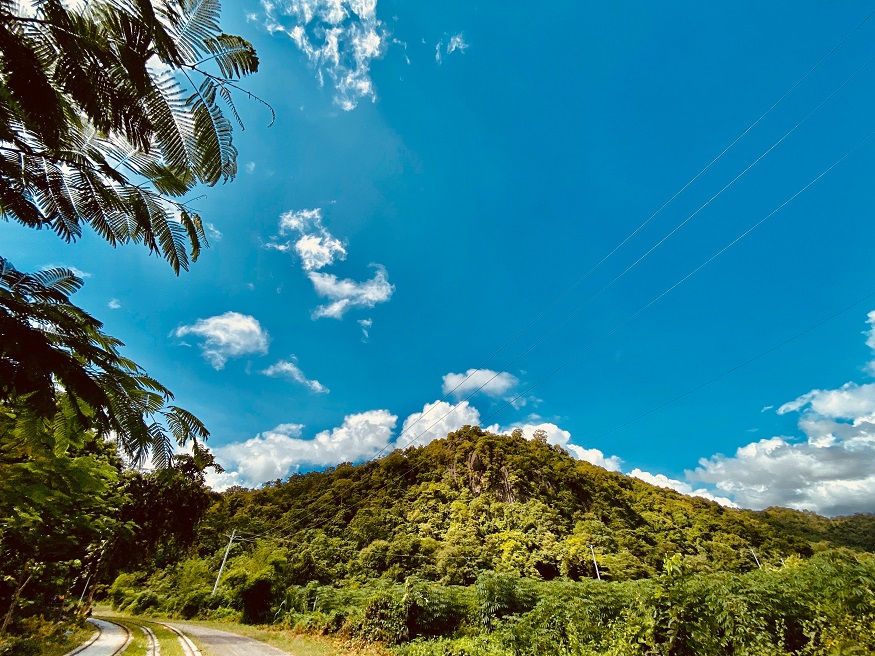 You may have seen travel vloggers journeying through the jungle on the Battambang bamboo train,  but there’s so much more to this northern Cambodian city than just locomotives.

It’s found about three hours by bus from Siem Reap (or eight hours if you catch a ferry up the river) and it’s a lovely place for some respite after the busyness of Angkor Wat. Battambang has built up a reputation as a friendly and creative city thanks to its collection of hip restaurants with menus that merge Khmer and French cuisine, as well as various boutique hostels.

You’ll also have numerous unique excursion options to fill your days with; head out on the Mekong in kayaks, cycle through pretty paddy fields or expand your knowledge of the Khmer Rouge at the beautiful yet harrowing Phnom Sampeu. It’s a hill 7km from Battambang and its temple buildings and caves were requisitioned during the war as prisons and interrogation sites.

And then, of course, there’s the bamboo train (known as the ‘norry’) which whizzes down a rough train track through the wilderness for a few kilometres and then back again. Many think it’s a bit overrated, but for 5 USD, can you really go wrong?

Check out all of our hostels in Battambang

Ready to explore the best places to visit in Cambodia? If you’ve discovered any more gems, we’d love to hear about them in the comments!

To find your dream hostel in Cambodia, download the Hostelworld app!

I’m Jemima, a full time travel writer and part time explorer who feels most at home in sunnier climes  Besides gallivanting around the globe, you’ll usually find me with my head in a book, drinking tea or plotting my breakthrough into fiction writing.

🌟 The ultimate guide to backpacking Cambodia