Portland is known as the west coast’s capital of hipsters. With liquored barbershops and hug therapists, who can blame them? Here’s our Ultimate Hipster Guide to Portland–everything you need to know to blend in with the hipstery crowd. 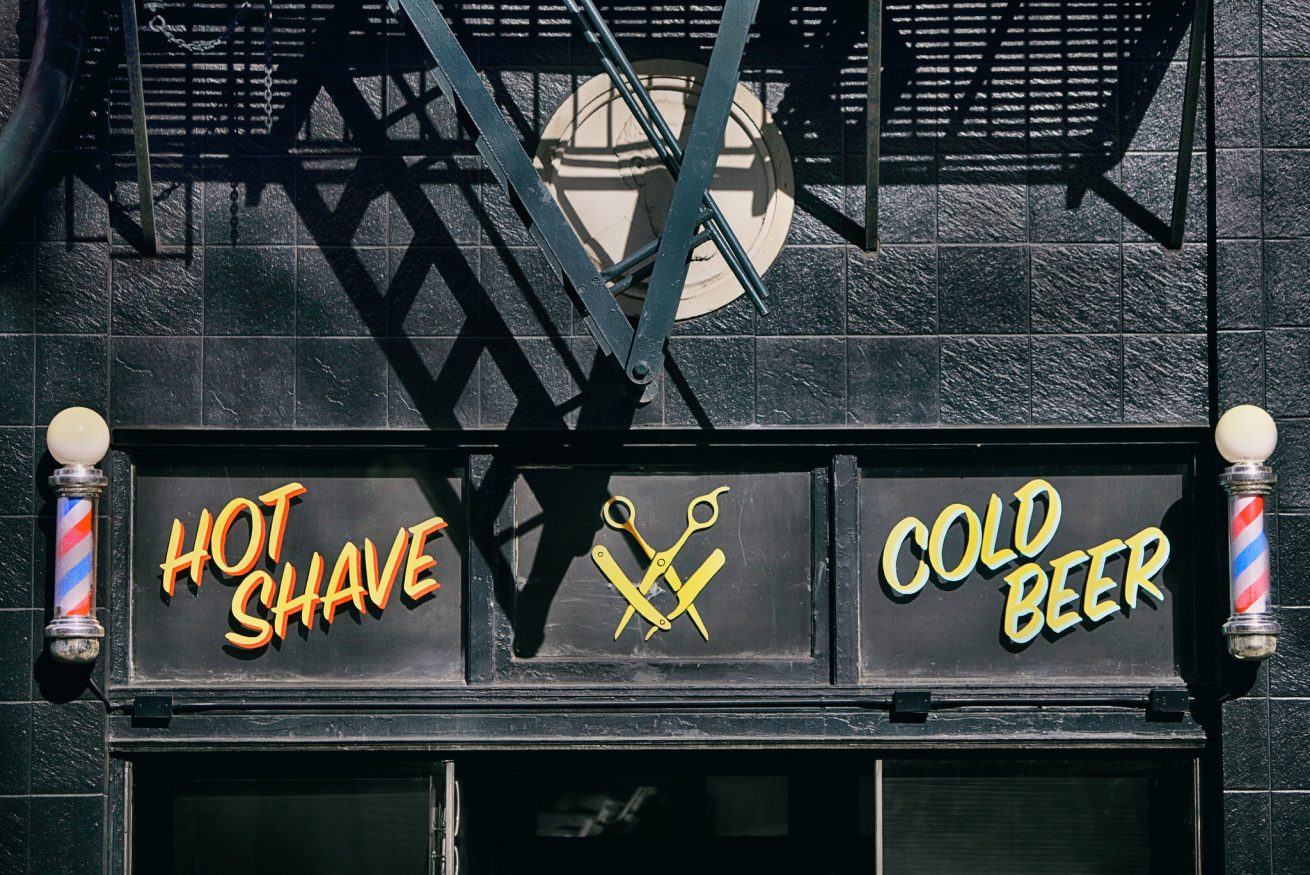 While Portland is peppered with excellent hipster joints, many of the best are found in SE Portland, around Belmont, Hawthorne, and Division streets. Hawthorne is chock full of alternative pizza joints, vintage warehouses, food carts, New Age lovers of kitsch and a number of crazy concert venues.

Northwards, Alberta Arts District attracts both curious tourists and quirky artists to its galleries, designer boutiques, a café that specializes in pies, and, of course, the Salt & Straw of Pear-&-Blue-Cheese ice cream fame.

Hugging the Willamette River, N Mississippi Avenue and its surrounding industrial area is booming with breweries, from German-styled Prost! to tune-loving Mississippi Studios.

A bit off the beaten path, St. John’s is a beloved neighborhood with its own special, unpretentious charm. Nestled between the Willamette and Columbia rivers, St. John’s is what many locals claim Portland was back in the day–old dive bars, artsy boutiques and a tight-knit community. If you want the honest hipster without all the snobbery, St. John’s is the way to go.

Make one of these neighbourhoods your first stop for all things hipsterific. 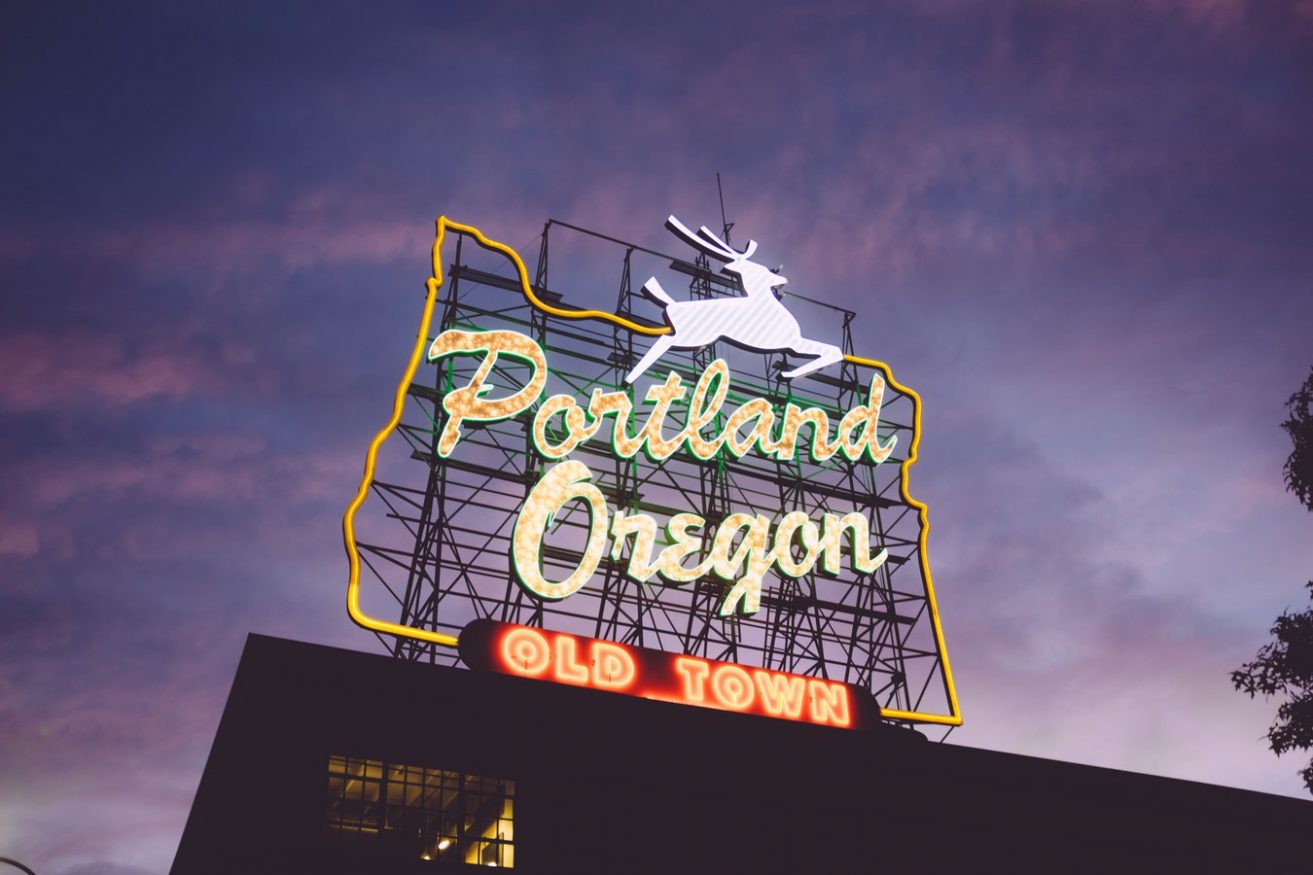 Hipster Things To Do

Though Portland has no shortage of stylish, hipster theatres, its the Mission Theatre that stands out with its vaudeville-like stage and mezzanine. As a historic location renovated by local legends businessmen the McMenamin Brothers, the Mission draws diners in with Old World carpets and Moroccan lanterns.

Of course, no coverage of Portland could neglect Powell’s City of Books, the indelible, literary landmark of downtown. As the largest used and new bookstore in the world, Powell’s houses approximately one million books over an entire city block – the perfect hidey-hole for hipster book worms!

Tucked away in Macleay Park stands the Witch’s Castle. Relatively reachable from NW Portland, this little hidden gem is a way to get out of the city without ever leaving city limits. Built in the 1930s, after being damaged in a storm and abandoned in 1962, it was mostly forgotten until some curious hikers and high schoolers brought it back to its moss-covered, spooky glory.

Even hipsters need a break sometimes. Get away from it all at the Japanese Garden, 12 acres of elegant stone lanterns, koi ponds, terraces, traditional Japanese villas and stunning Japanese maple trees.

According to some, secret passages under Portland’s Chinatown–the Shanghai Tunnels–were once used to kidnap unsuspecting passersby to work as sailors on ships–a practice known as “shanghaiing.” You can take a tour of the underground tunnels, complete with colorful anecdotes and ghost stories.

Need to get your game on? Head to Game Knight, Oregon’s first board game lounge. Grab a beer, cocktail or munchies and while away the hours with board gamers who are just as geeky as you (fake wide-frame glasses optional).

Portlanders love to shop at thrift stores, and no matter what neighborhood you’re in, you can bet you’ll stumble into one. You can’t go wrong with Buffalo Exchange, with locations downtown across Powell’s and just off of Hawthorne. Hawthorne is also home to Crossroads Trading Company, a consignment store with a bit more delicate taste. Dressing for a themed party or troubadour troupe? The massive warehouse of the Red Light Clothing Exchange never fails. 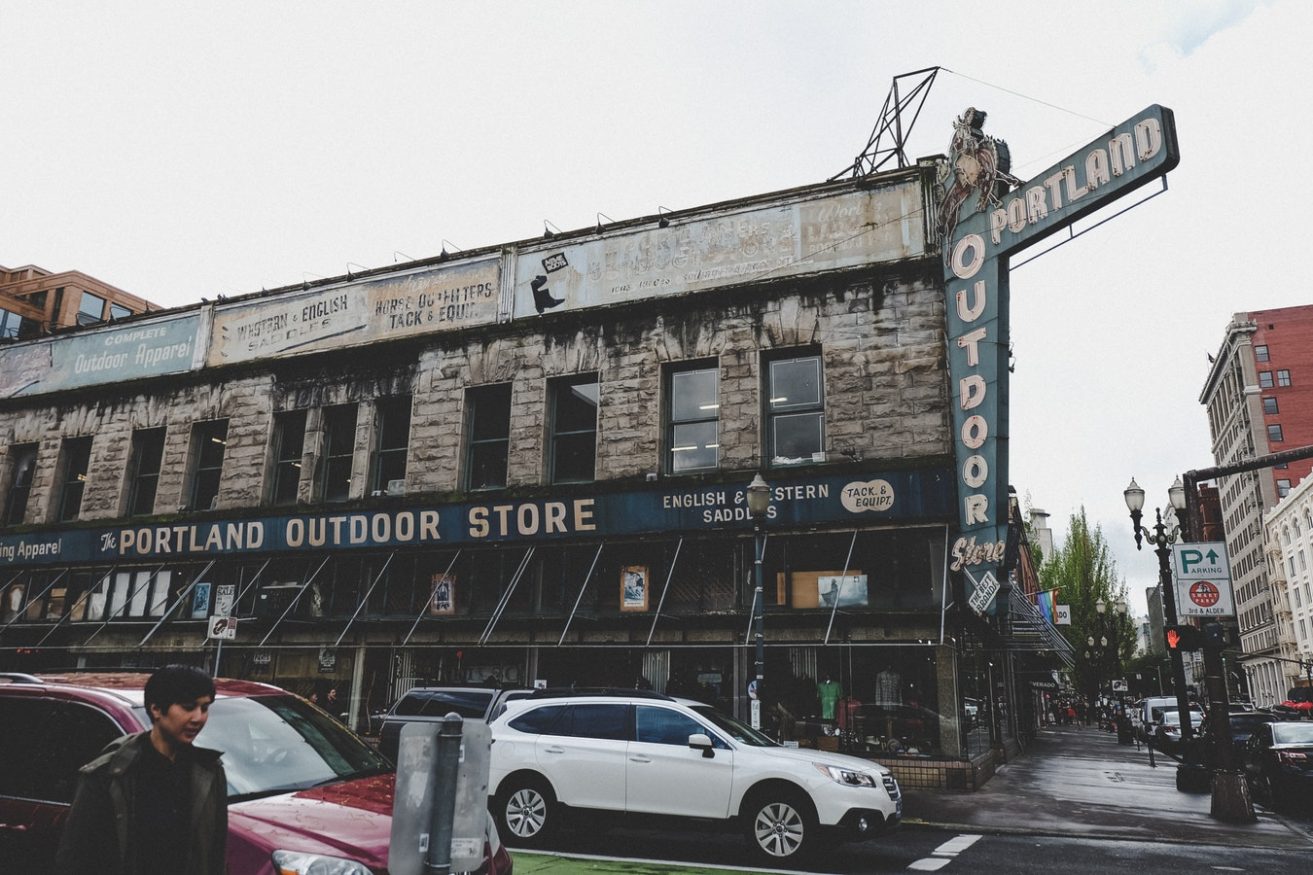 From classy cocktails to world-renowned taprooms, Portland’s got your thirst covered.

Your first stop should honestly be Circa 33. Mustachioed bartenders, a secret outdoor backyard, and stacked shelves that redefine the word “high-shelf”–this Prohibition-themed Belmont staple has it all to dazzle and delight. Don’t leave without sampling the devilishly tasty kale-and-blue cheese mac & cheese.

If you want to continue the night at a hidden speakeasy, Secret Society serves only vintage cocktails and absinthe.

Hopping mad for a good beer? Head over to Basecamp, who have been brewing lagers and ales onsite since 2012. This craft brew bar thrives on its passion for the outdoors, adventure, and, of course, the hops.

No place says English-style brewpub more quite like the Horse Brass. Located on the end of Hawthorne, this bar impresses with its classic dark wooden décor, and a jaw-dropping beer list that includes cask-conditioned ales, sours and good old-fashioned lagers straight from Bavaria.

Should you find yourself in SW Portland, the Multnomah Whiskey Library will take care of you. A cozy, vintage ambiance, and a collection of more than 1,500 distillations is sure to put you on the right track.

Portlanders love their coffee, and no one does it with more flair and favoritism than Stumptown, named after one of Portland’s own monikers. The popular sharpness of its brews has led to plenty locations across town: Salmon, Division, Belmont, Ace Hotel, 3rd street, and at the airport. 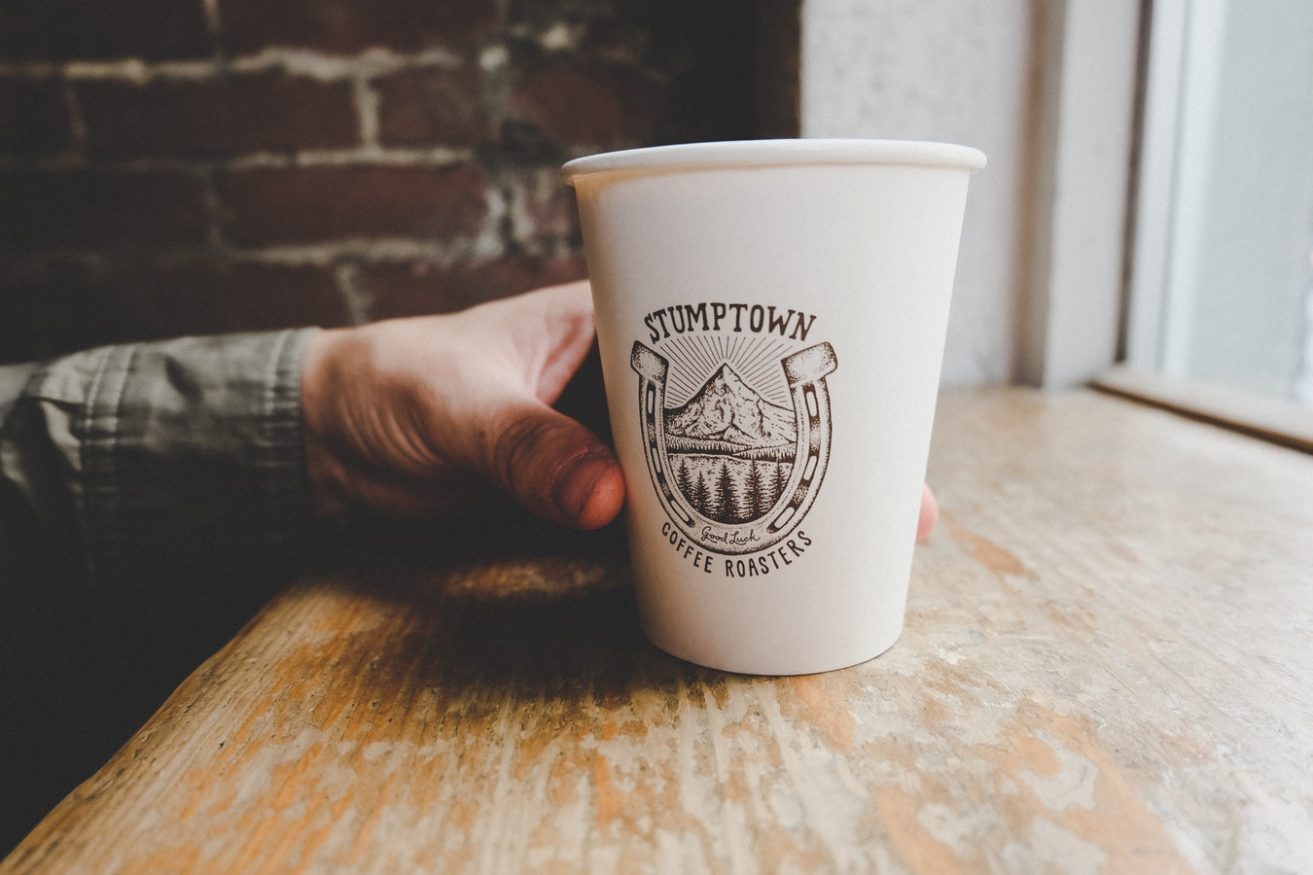 The reportedly haunted historic Rimsky-Korsakoffee House in SE Portland serves some of the most eclectic desserts and coffee in a turn-of-the-century Craftsman. Open from 7pm to late into the night, it’s the ideal cozy atmosphere to whisper your scandals and secrets or just enjoy a good ole pot-au-chocolat.

The White Owl Social Club on SE 8th is a beloved hipster bar in the Buckman neighborhood. Crowds range from the unpretentious post-work crowd to the vegan hipsters who come for the live bands.

Cathedral Café mixes cozy and eclectic with this artisanal food and brews. Its wooden tables and weekend brunch can make anyone feel right at home.

Another serious coffee brewer, Case Study Alberta is for those who take their java with a straight face.

If Portland is famous for anything, it’s the range of inexpensive, high-quality, wildly delicious and diverse foods. From food carts to brunches, if you spent your whole visit in town just eating, you’d have spent your time well.

Bagging itself a well earned spot on the tourism trail, no visit to Portland is complete without dropping in to Voodoo Donuts. With wacky flavors smack-dab in grungy Chinatown, this is Portland in a nutshell. Bonus tip: If crowds have got you down, skip the tourist lines at the eastside location off Sandy Blvd (still under the radar… for now). 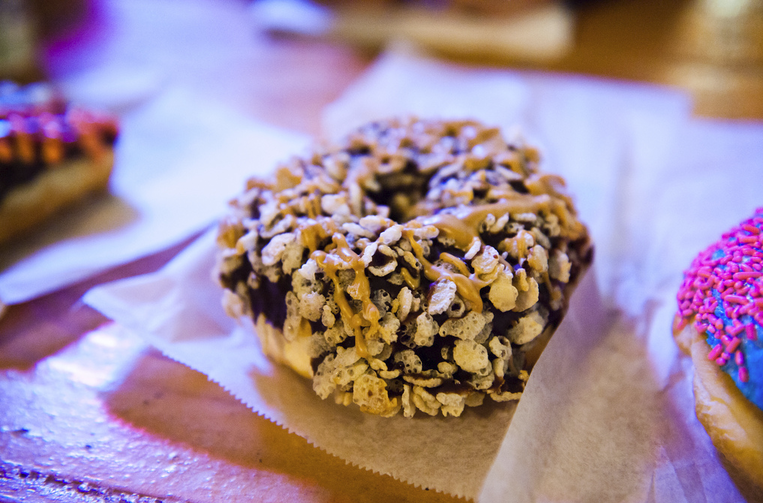 If you want some good ole American cuisin, Tasty and Sons is a widely popular restaurant that specializes in Southerly BBQ Chicken, steaks, bisket, sliders and unique salads and seafood.

Portlanders love Thai food, so it should be no surprise at the massive popularity of Pok Pok on Division.

Luc Lac is a tiny Vietnamese tapas joint that surprises everyone with world-class cocktails and mouthwatering Vietnamese small plates.

Tapalaya combines tapas and southern food with a flair of Vietnam for a succulent treat. With live jazz performers, authentic chicory and all the maple-covered fried chicken you could want, this is a must while you’re in town. Stay classic with Cajun Jambalaya or try it with a twist pork belly Banh Mi.

Pambiche boasts authentic Cuban dishes like Adobo-rubbed pork shoulder in a restaurant that looks like it was splashed with a rainbow hose.

Alberta is home to the Tin Shed, who does brunch like no one else–potato cakes, eggs, signature burritos, burgers and Bloody Margaritas.

If you can’t choose between Portland’s amazing restaurants, never fear. Head to Cartopia on Hawthorne and 12th, just one of the many food cart pods in the city. At least here you’ll be able to sample a multitude dishes in one evening: Potato Champion, Perierra Creperie, Pyro Pizza, to name a few.

Does Portland sound hip enough for you? Let us know in the comments below!

🇺🇸 The 10 Best Places To Solo Travel in the US

🗽Help Us Bring Hostels To NYC