There is no better time to visit Kiev. In April 2018, the government relaxed its tourist visa conditions meaning that an additional 46 countries can now apply for a tourist visa online or obtain a Visa On Arrival at the airport. This vibrant capital is the seventh largest city in Europe and home to over 3.5 million residents. Let me walk you through 15 of the best things to do in Kiev, the capital of Ukraine.

The Chernobyl accident was one of the most disastrous nuclear incidents in history that still has negative environmental and health repercussions to this day. The 30km exclusion zone is located a 2-hour drive north of Kiev, close to the Belarusian border. Without a doubt, my two-day tour of the Chernobyl Exclusion Zone was a stand-out moment from my Ukranian travels. It is a legal requirement to obtain the correct permits, and it’s easiest to hire a private guide or join a tour to enter the exclusion zone. During the tour, you’ll explore the abandoned town of Pripyat, spot wildlife, meet original residents who have returned to live inside the zone and you can enjoy a cafeteria meal with the nuclear plant workers in the Chernobyl staff canteen. Despite the invisible radiation, as long as you follow the rules, it’s as safe as a transatlantic flight — and a completely disturbing, educational, and unforgettable experience. Recommended tour providers: SoloEast, Chornobyl Tours and Yomadic. 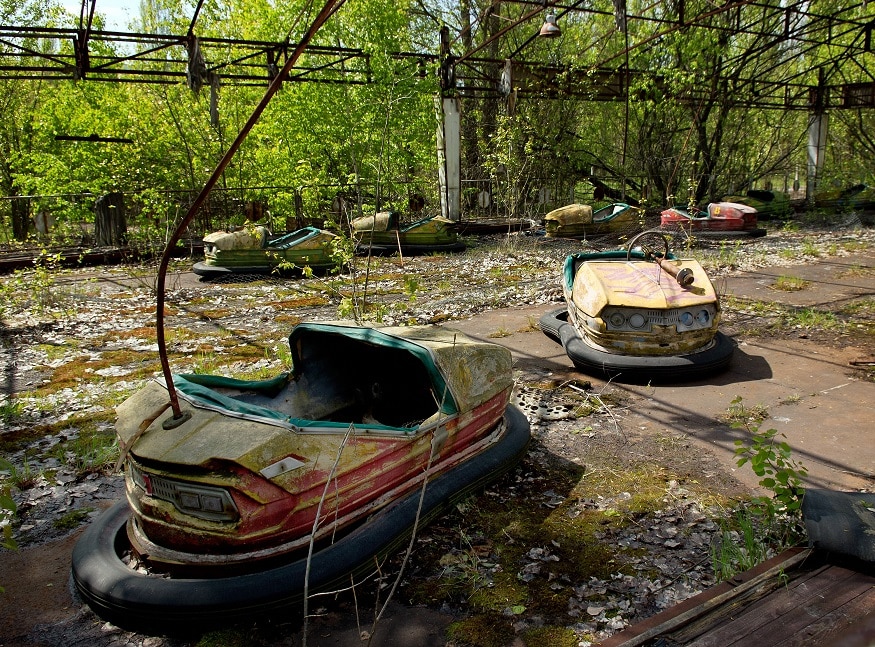 The Byzantine architecture of Kiev’s Saint Sophia cathedral may seem familiar if you’ve visited St Mark’s Basilica in Venice or Istanbul’s Hagia Sophia (which Saint Sophia is named after), but overall remains a much more pleasant experience for seasoned travellers. Forget selfie sticks and hoards of tourists (photography is banned within the main cathedral) and take a peaceful moment to marvel at the elaborate mosaics, frescoes, decadent Orthodox iconography. If weather permits, finish up with a stroll around the lush gardens. It’s also worth paying extra to climb the bell tower – the views over Kiev are absolutely gorgeous! 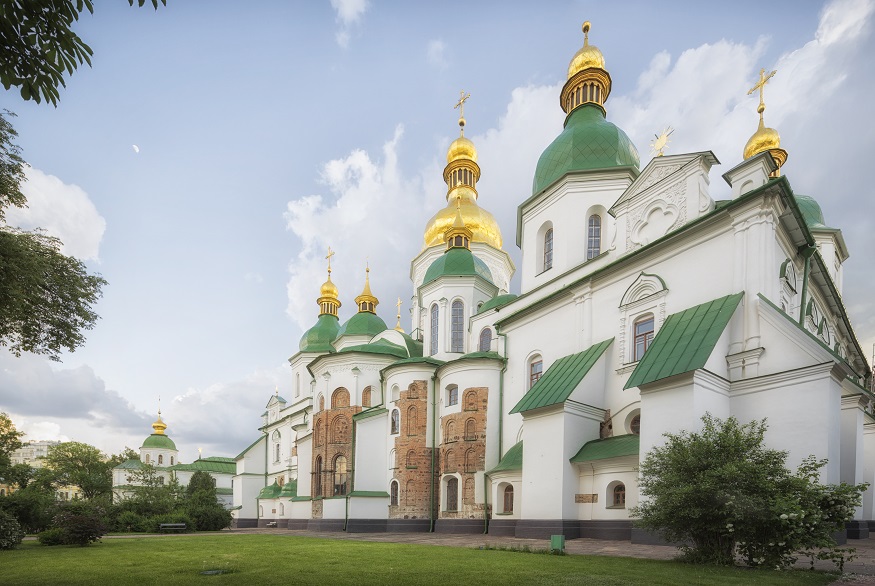 One of the oldest, most happening and most rapidly gentrifying districts of Kiev: amongst the cafes with the “We Speak English!” signs, the craft beer bars and the co-working spaces, you’ll find Podil. It’s packed with cool and cultural activities and it’s the perfect place to chill out and find your budget-friendly accommodation. Being home to the oldest university in Eastern Europe, Podil offers a distinct student and hip vibe. It’s a liberal, tolerant and open part of Kiev, and it’s making a distinct effort to be welcoming to travellers. Get amongst Kiev nightlife at local institution Closer, or take the funicular from Mykhaylivs’ka Ploscha to Poshtova Plosch whilst enjoying immense views of the River Dnieper. 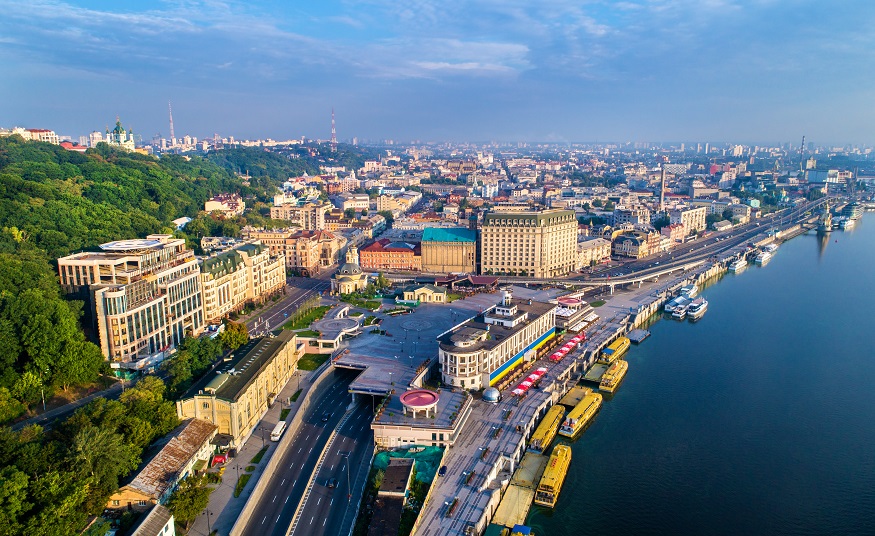 Forget Berlin or Paris — perhaps it is Kiev that’s in the middle of a street art revolution. Opt in for a street art walking tour with Kiev Friendly Tours. However, if you’re limited on both time and funds, download the Kiev Murals app, your interactive and informative guide and map to over 100+ Kiev murals that have been created by both foreign and local artists. For further reading, head over to ArtUnitedUs, an international project which promises to “collaborate through artistic and creative mediums with communities to raise public awareness and attention to the problem of war, aggression and violence”, and see what part art is playing within Ukraine’s current political climate.

When researching where to eat on a budget in Kiev, all roads kept leading us back to Puzata Hata. Like an IKEA cafeteria, don’t expect glamour but a practical, cheap and efficient cafeteria chain, filled with students, office workers and best of all, no-frills dining. Grab a cafeteria tray and slide your way along different serving stations, grabbing bowls of steaming borscht and varenyky which are all served up fast and with plenty of spare change. English isn’t as commonly spoken here as in many other large European cities, but plenty of enthusiastic pointing and nodding will get you a long way.

Kiev is home to some incredible urban exploration that is thankfully not crawling with Instagrammers. With Kiev Friendly Tours, you can watch the sunset from an abandoned hospital, explore a nuclear fallout bunker and squeeze yourself down a manhole to meander through a sprawling 50km network of underground tunnels (definitely not one for the claustrophobic.) Combining ‘urbexing’ with a tour is an excellent and alternative way to gain an understanding of Ukraine’s colourful history, as well as its contentious rise to independence.  is recommended.

7. Ride the Kiev Metro (including the world’s deepest underground station)

The Kiev Metro system is not only cheap and super photogenic, but is also home to the world’s deepest underground station, Arsenalna. Located 105.5 metres underground, the escalators from the base platform level take five minutes to emerge at ground level. During your escalator ride, watch on with fascination as many impatient Kyivans sprint past you at almost-vertical angles. At Universtyet Station, you can admire the marble busts of famous Ukrainian writers and poets, whilst the pylons at Vokzalna Metro depict various episodes in Ukraine’s history. The Kiev Metro carries over one million passengers daily and no matter what time of day you take it, it always feels like peak hour. Pack a camera, your Metro coupons and some big city bravery. 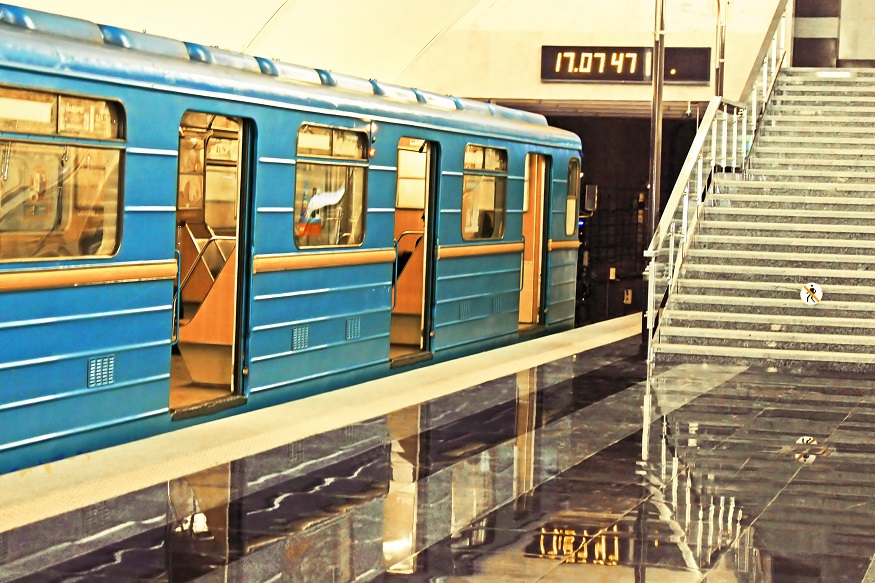 8. The political heart of Kiev, Maidan

Maidan Nezalezhnosti, Maidan or Independence Square, is an expansive and notorious public square in central Kiev and regarded as the political heart of modern Ukraine. Since Ukraine gained independence in 1990, it’s been home to at least four large-scale political protests since, with the most recent and infamous one being the 2013-14 Euromaidan. Recommended background reading about Ukraine’s extensive history (such as historian Anna Reid’s “Borderland”) will make your time at Maidan a more considered experience. Whilst Kiev is peaceful, the annexation of Crimea and the subsequent Russian military intervention rages on down south. Maidan is therefore the starting point for learning about recent Ukrainian history and one can’t help but ponder an area that was not so long ago the scene of deadly protests, yet is now proudly draped with blue and yellow flags and ‘I Love Kiev’ magnets.

As use of budget airlines continues to increase, it is a delight to find the Kiev Express sleeper train still running nightly from Warsaw. My travel companions and I booked out a three-bunk sleeper to ourselves, complete with kitschy lace curtains and faded carpet runners and we settled in for a 17 hour non-stop journey. The Kiev Express doesn’t contain a restaurant or bar, so be sure to shop before you board and stock up on snacks and booze (don’t forget to share it with your neighbouring cabin – snacks are always a great icebreaker!) The train itself is ridiculously noisy, so be prepared to throw down lot of medovukha in order to get some sleep. Tickets can be booked via Polrail Travel Agency.

Architecture lovers will love Kiev. With a mixture of gold capped churches, tree-lined boulevards, cobbled streets and plenty of green spaces to lounge about it. However, it’s the decommissioning of Soviet-era statues and buildings that continues to fascinate me and it goes without saying that in modern Kiev, that even the city’s architecture has not escaped political controversy. Use blogger Megan Starr’s guide to Soviet Kiev, as well this comprehensive Wiki as a source of inspiration, and set off on a self-guided photography tour of Kiev’s Soviet remains whilst they still exist. Highlights include the Friendship Bridge, Ukrainian House (formerly Lenin Museum), the Place of Weddings and the retro-futuristic Hotel Salyut. 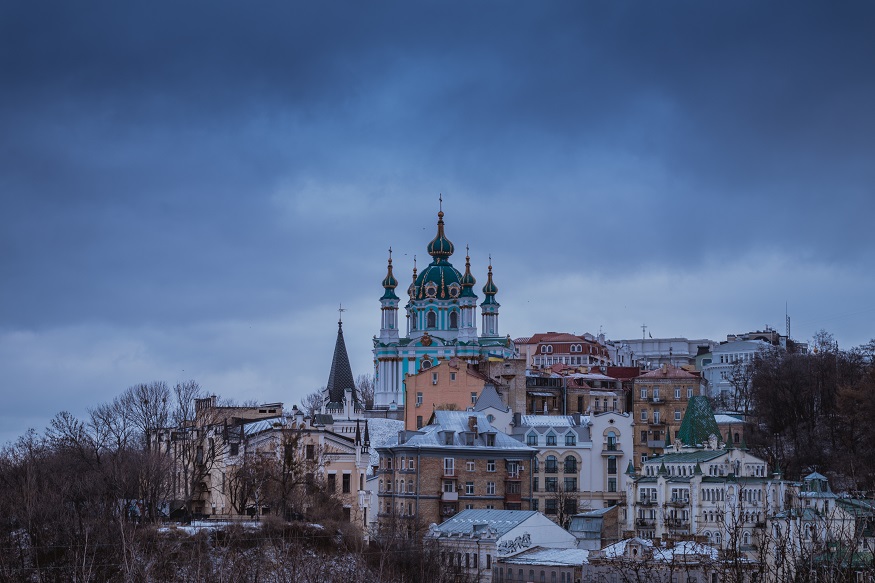 There has to be more to Ukrainian cuisine than the ubiquitous Chicken Kiev and I’m on a mission to try as much of it as possible. I’m obsessed with borscht and my favourite Slavic soup can be a contentious topic around Eastern Europe with everyone claiming their (Grandma’s) recipe to be the best one. With or without cabbage? Clear or cloudy stock? Soviet cosmonauts loved borscht so much they even took tubed varieties up into space.  Vegetarians beware, there are some Ukrainian borscht varieties that are served with fried pigs ears – and sorry #notsorry it’s absolutely delicious! Whilst there are many places to try Ukrainian cuisine around Kiev, getting an invitation to dine in someone’s home is a great way to try everyday food. My most memorable meal in Kiev was served with love: homemade varenyki, datscha-grown vegetables (with liberal amounts of yoghurt and dill), and a generous serving of salo, made possible by my generous host and the linguistic assistance of Google translate. If you’re there in late summer, check out the popular Ulichnaya Eda street food festival, which since 2013 showcases the superstars of Kiev’s food scene.

You’re probably asking why I’ve included opera in a backpacker blog. For most people, going to the opera remains one of the most prohibitively expensive entertainment activities and is usually only reserved for luxury travellers. Indeed, one of the world’s most famous operas, Italy’s La Scala, has tickets going between €250-300. However, in Kiev, I was able to score front-balcony tickets for the affordable price of €11! Honestly, check out tickets and program information for yourself if you don’t believe me! The Ukrainian National Opera House of in Kiev boasts opulent interiors, decadent backdrops and costumes and are all worth the entry price alone, even if you don’t understand the (in my case, very Cossack-inspired) performance.

Be sure to put aside an entire day to visit Mezhyhirya, the €50 million crib belonging to ex-President Viktor Yanukovych. From an onsite zoo, manicured gardens, vintage car collection and a heated lake (why?), this is a mansion that defies ostentatiousness. Requiring 2000 support staff and running daily maintenance costs of €50,000, the Mezhyhirya Residence is now a symbol of economical exuberance. Yanukovych was forced to resign in 2014, and now his private residence can be booked as an offbeat day trip located in the village of Novyie Petrovtsky, only 30km north of Kiev. The sprawling 140 hectares can also be explored by golf cart or bicycle (both are available to rent onsite). Guided tours start from 200 UAH (Ukrainian Hryvnia) which is a fair price at around £5-£6. 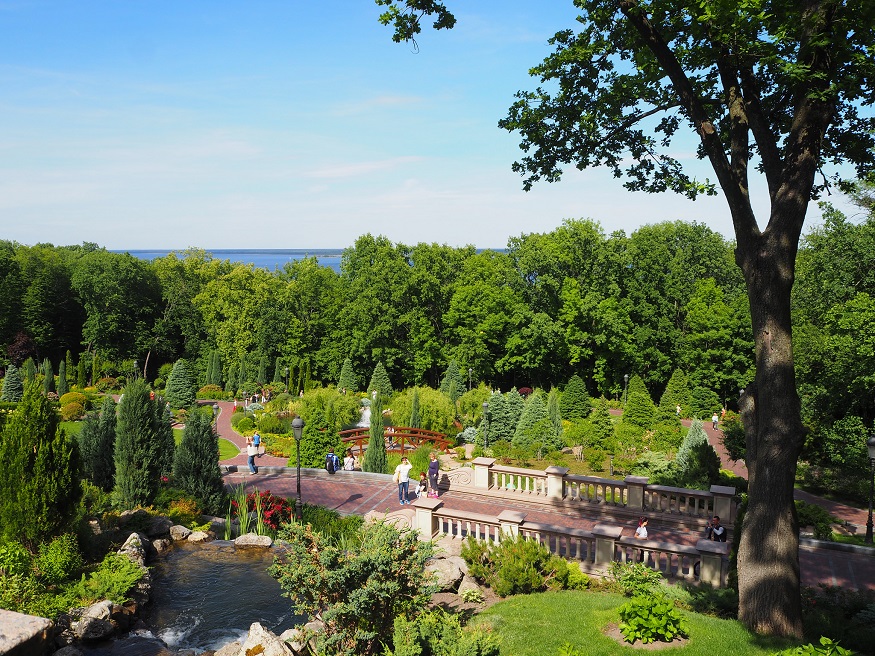 14. Blow the drinking budget in style

Compared to other European countries, drinking won’t be confined to happy hour beers at the hostel bar or a cheap supermarket wine in the park. Depending on what currency you’re carrying, Kiev is definitely a city to dress up and go top shelf in. The award-winning Parovoz speakeasy can be a little tricky to find but you’ll be rewarded with the highest quality ingredients, in a cosy environment, located in the ground floor of the city’s oldest cinema. Check with your hostel, DIY with the help of online bar crawl guides or let the Bar Crawl Kiev team help you explore Kiev’s nightlife.

Boasting the best contemporary art collection in Central and Eastern Europe, PinchukArtCentre has also exhibited some of the world’s most renowned contemporary artists including Damien Hirst, Ai Weiwei and Anish Kapoor. Backed by multi-billionaire businessman Viktor Pinchuk, the centre is a multistory gallery (with a fantastic rooftop cafe) and has helpful English-speaking guides on site to answer any questions you may have. Best of all, it’s free to visit!

Find a Hostel in Kiev

Fiona Laughton is a Berlin-based Australian writer who has lived and worked in Germany since 2013. She’s an avid reader and pop culture obsessive, who keeps her best travel stories strictly “off the record”.

* Note: The international spelling of “Kiev” has been used for this article. This does not reflect the author’s political position *