Forget basket-wielding bunnies and gorging yourself silly on chocolate, Easter in Spain is a sombre affair. The whole week of Semana Santa (Holy Week) is passionately celebrated with religious processions, masses and music. The festivities begin on Domingo de Ramos (Palm Sunday) and last until Lunes de Pascua (Easter Monday), but the most elaborate events and processions are held on Maundy Thursday and Good Friday. For cultural backpackers, Spain really is at its peak during these celebrations, so here are six Easter traditions in Spain you’ll want to experience:

By far the biggest of all the Easter traditions in Spain are the religious processions. The word procession comes from the Latin ‘processio,’ meaning “marching forward.” Wherever you are in the country, town, city or village, you will encounter a procession of some kind. The most lavish takes place in Seville, with pilgrims from all around the world travelling to the city to watch more than 50,000 people participate.

Cast aside everything you expect from an Easter parade. This is a highly religious event, and for those taking part – a huge privilege and profound act of self-flagellation. There are multiple processions over the course of the week and the processions can last up to 14-hours at a time. Additionally, enormous, elaborate pasos (floats) and misterios (pieces of art) featuring statues of Jesus, the Virgin Mary and The Last Supper, are carried through the streets, some so large they require 50 or more people to bear the weight, which can be as much as a ton. They are accompanied by confradías (religious brotherhoods), whose hooded outfits bear an unsettling resemblance to those worn by the KKK – although there is zero affiliation. The brotherhoods walk in silence, often barefoot and are joined by mourners – women in black, with veiled faces, carrying lit candles. As there is so much melted wax on the streets – children compete to see who can craft the biggest wax balls.

Around Spain, each city puts their own spin on these processions. Málaga, Granada and Seville are the largest and most magnificent. In contrast León and Castile are regarded as the most serious. In Valladolid and Cartagena, the religious sculptures on display have been created by contemporary artists, or by some of Spain’s most famous artists from many centuries ago. In Lorca the streets are overtaken by horses and chariots and in Castilblanco de los Arroyos, a small city in the Province of Seville, they manufacture Judas dolls, place them around the city and set them on fire. On Holy Thursday in Verges in Catalonia, the ‘dansa de la mort’ takes place. This death dance re-enacts scenes from the Passion and everyone dresses as skeletons and parades through the streets holding boxes of ashes. The dance itself begins at Midnight and continues into the early morning. 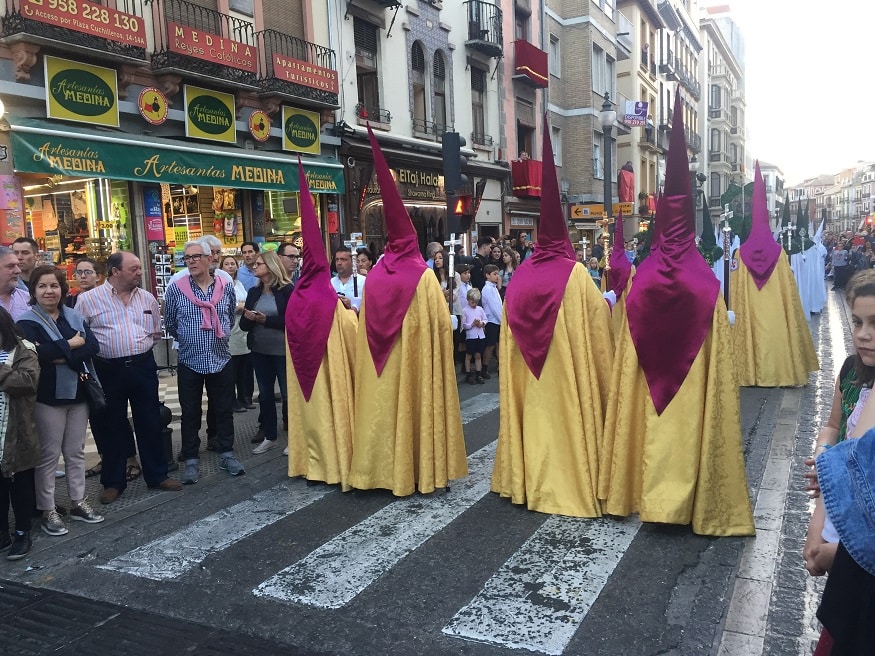 While many of the Easter celebrations are a silent affair, this is Spain, we all know music runs through their blood, and over Easter it shows up in many forms. During the processions saetas break out from time to time. These are traditional pieces of Spanish religious music with hints of flamenco, which are tributes to the Virgin Mary and are typically performed from balconies as the processions pass below. Brass bands and the dull thud of drums accompany the processions, creating an intense soundtrack to the already impressive spectacle.

In Hellín, a town in the Province of Albacete, 20,000 drummers move through the streets during their annual drum-festival, the Tamborada. Madrid also hosts a tamborada on Easter Sunday, when the chosen brotherhood gathers drums of all shapes and sizes and beat out a rhythm meant to symbolise the tremors Earth experienced on the day Christ died on the cross. In Cuenca, Semana Santa is celebrated with the Religious Music Week Festival, with concerts taking place in the city’s historical buildings. If you’re in the market for some Gregorian chanting (and why not?), head to Zamora.

While they may not eat piles and piles of mini-eggs, the Spanish certainly don’t miss out on sweet treats at Easter. However, in typically Spanish-style, their delicacies are mostly bread-based. Torrijas are a popular choice, made from bread dipped in milk and egg, fried (of course!), before being drenched in honey and sprinkled with a healthy mound of sugar. Sometimes this sugary layer is burnt a little to resemble a crème brûlée. The Basque Country is known for the best torrijas in Spain. Bueñelos are similar to doughnuts, just without the hole. Valencia, where they make them with pumpkin, is the top place to give these a bash. Another deep-fried Easter treat is the pestiños – orange and anise-flavoured fritters drizzled with sugar and honey. The best on the block are made down in Andalusia. Monas de Pascua is a typical Spanish Easter cake, consisting of a sweet bread ring, with whole eggs baked into the top, sprinkled with sugar and candied fruit. In recent years, Spain has given in to peer pressure and created some chocolate versions, topped with Easter eggs to keep the international masses happy.

Easter is an important time for families, so many take time off work and travel back to their home towns to spend time with their loved ones. Those that aren’t participating in the processions will certainly get together to watch them, often with a few deck chairs and a picnic. One of the most widely celebrated Easter traditions in Spain is a family dinner on Easter Sunday, where people feast on garlic soup with a baked egg in the middle, and fresh seafood.

While things start off solemn, once Christ is Resurrected, the Spanish swing right back up to their sweet spot – party mode! The tense atmosphere changes dramatically on Easter Sunday when the news of the Resurrection of Christ cheers everyone right up. Processions are replaced by colourful parades; the floats are decorated with floral bouquets, and music blasts from everywhere. This is the time to eat, drink and dance in the streets. 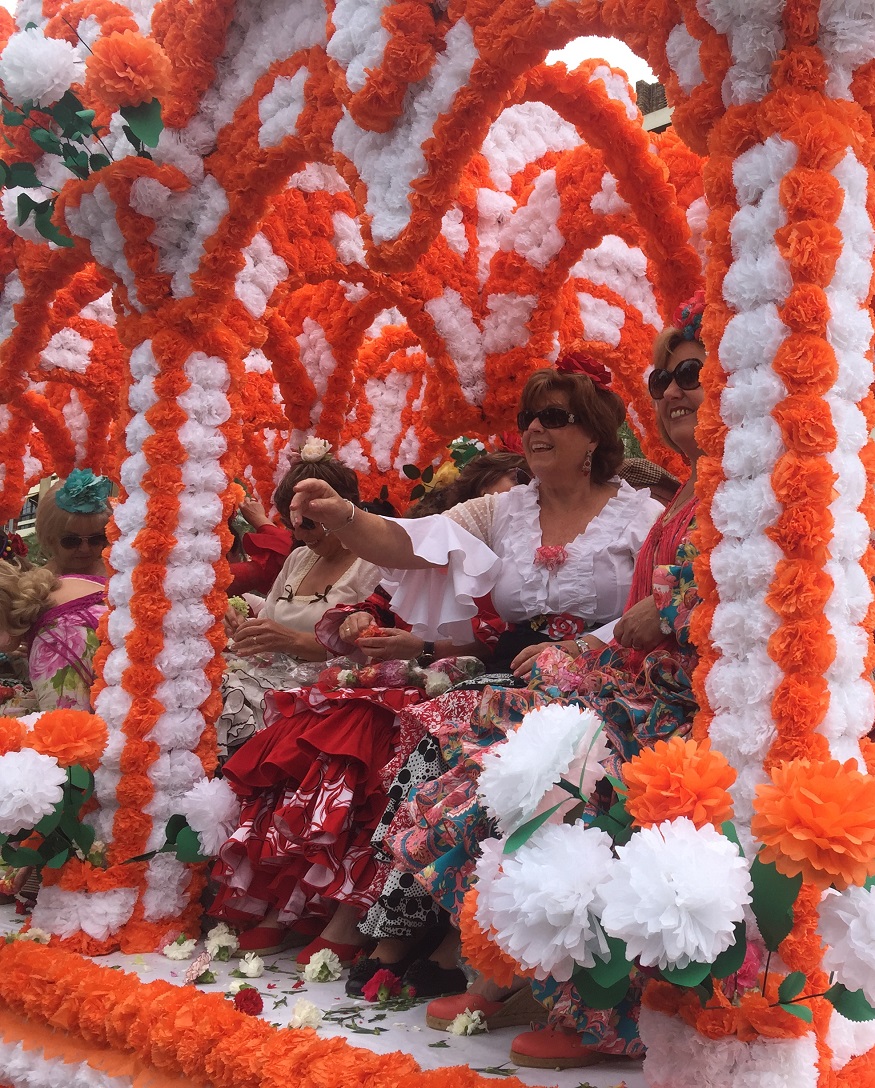 Spaniards firmly believe that it always rains on Semana Santa – so if you’re in town do as the locals do and pack a brolly. Also, every year in Málaga, a prisoner is freed on Easter Wednesday. This dates back to the time of Charles III when a group of prisoners escaped from Málaga prison, carried a statue of Jesus through the streets, and then returned to their cells immediately after. The King was so impressed he decided to free one of them, and the tradition remains to this day. Additionally, in Valencia, at midnight on Easter Saturday, people lob old pots, pans, tableware and jugs of water from their windows and balconies. This tradition is said to mark the beginning of Spring, as well as a little ‘out with the old, in with the new.’ 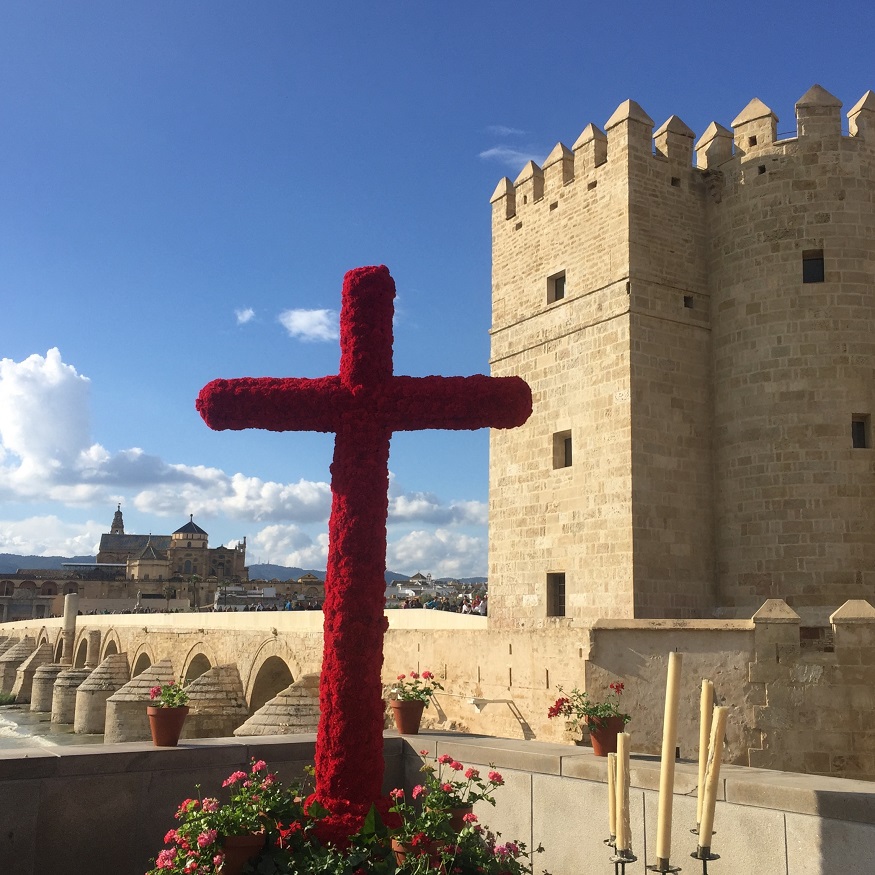 If you’re heading to Spain during Semana Santa (Easter) make sure you plan ahead as accommodation gets booked weeks in advance.

In need of some Spanish hostel inspiration? Check out The Best Hostels in Spain for Every Backpacker

Still not convinced? Have a read of this > 15 Reasons to Visit Spain

Amy Baker is the author of Miss-Adventures: A Tale of Ignoring Life Advice While Backpacking Around South America, and founder of The Riff Raff, a writers’ community that supports aspiring writers and champions debut authors. You can follow Amy on Twitter.