Cheap, authentic and supremely instagrammable – we LOVE street food and we know you guys do too. Eating street food is a not only a great way to eat well on a backpacker’s budget, it also gives you the opportunity to chat to locals and find out more about the dishes and traditions behind them.

There are so many different street foods out there, in every country, region and city. To help you on your foodie quest, we’ve put together a guide to the most iconic street foods from around the world that you must try – from falafel in Israel to currywurst in Germany – you won’t believe what you can find for under a fiver. Think of this as a starting point for your culinary explorations, and be sure to share your own must-eat street food suggestions in the comments below!

1. Chimney Cake in the Czech Republic 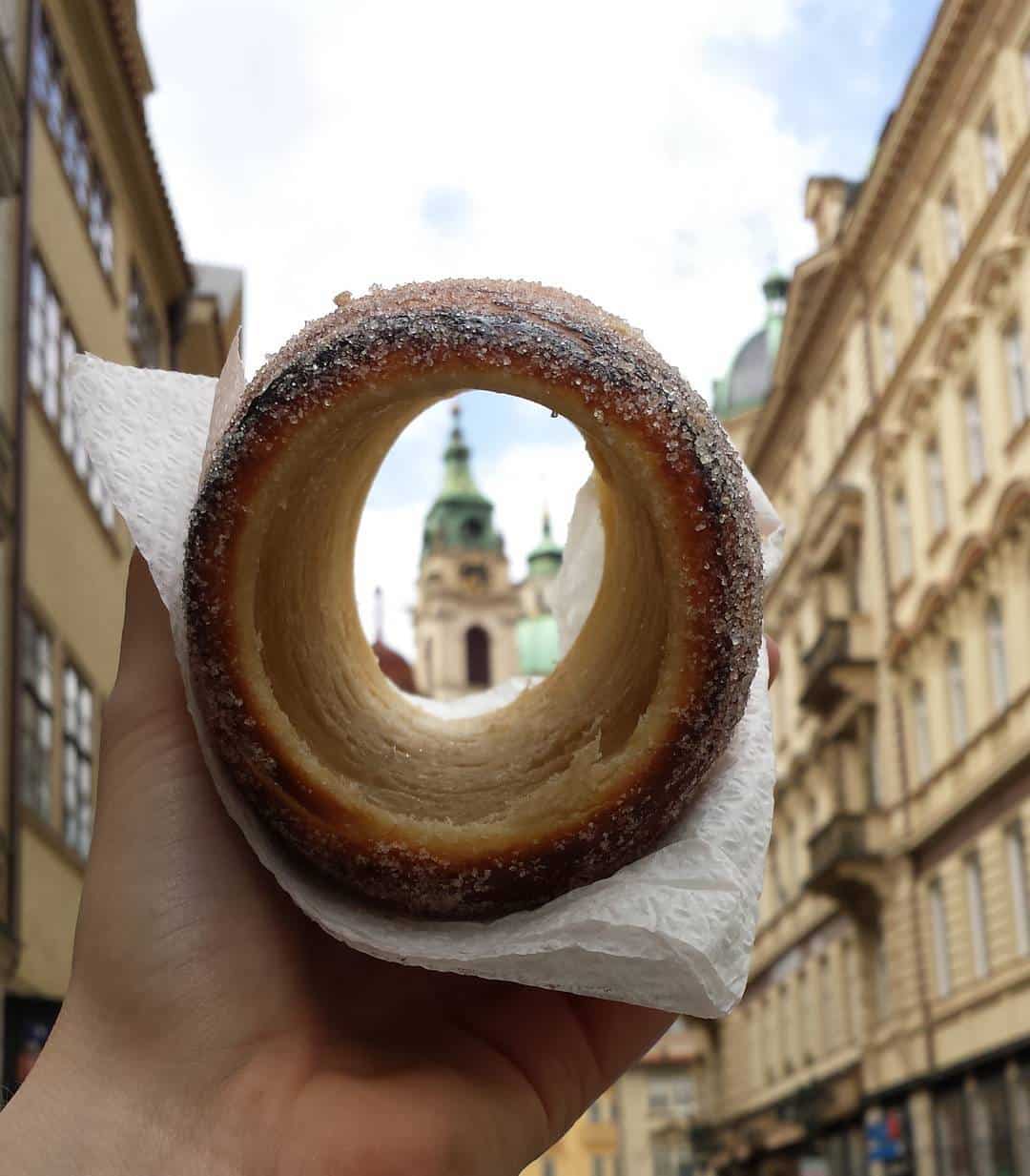 Trdelník aka “chimney cake” is both a novelty photo opp and a sweet treat all rolled into one! These spiral-shaped donuts are made by wrapping the batter around a large spit, which is then cooked over a grill, rolled in sugar and served with lashings of Nutella. What’s not to love!? Guaranteed to warm your cockles on a cold Czech morn.

Get it from: Literally anywhere in Prague. We recommend getting one from a corner stall on the Old Town Square so that you can snap an obligatory “church through the middle of the chimney cake” photo before you eat it. 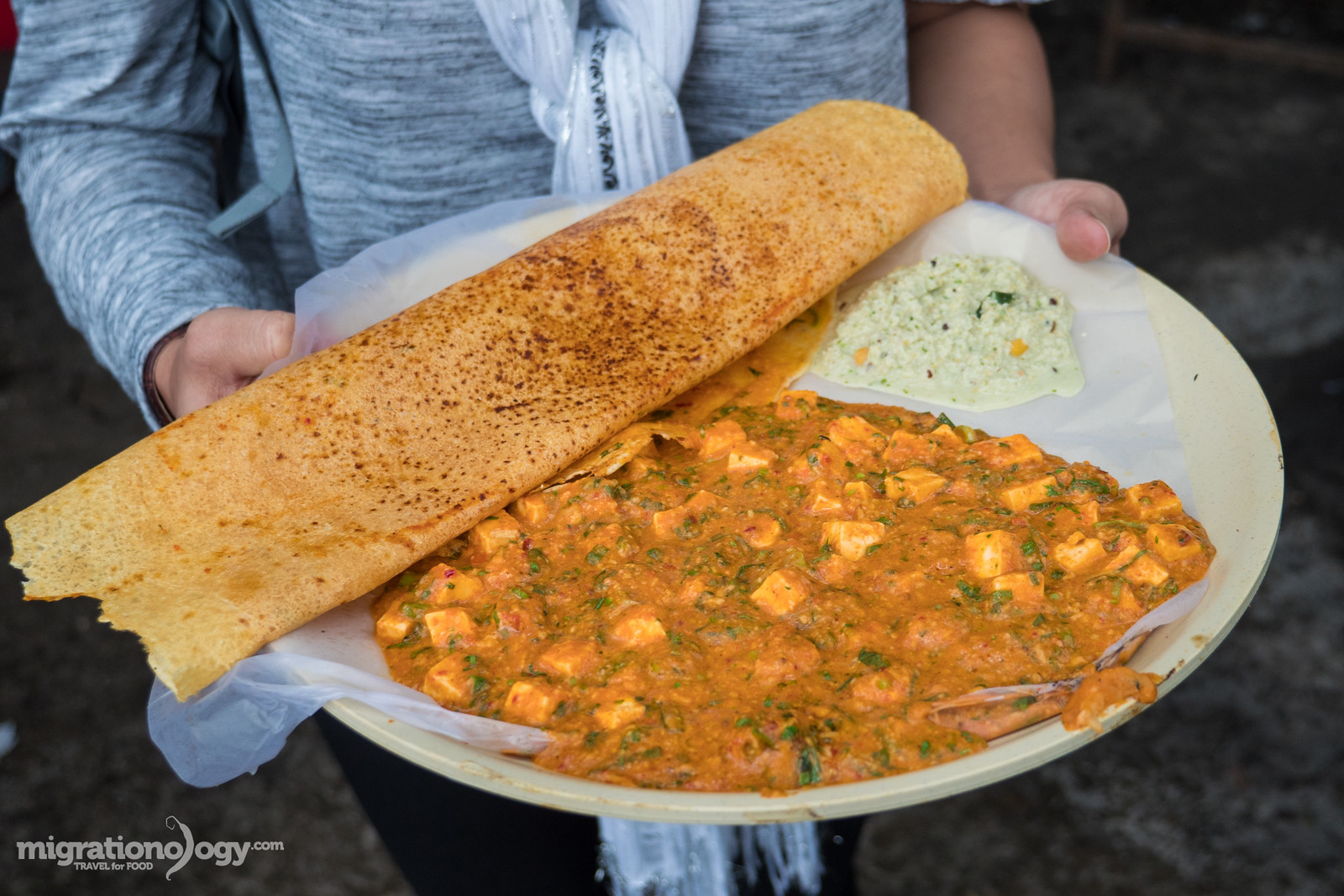 The humble masala dosa is indigenous to the Southern states of India and usually comes served with sambar and chutney. It’s cheap, quick and high in carbohydrates. Perfect for hungry adventurers on the go.

Get it from: Anand Stall in Mumbai for massive helpings and the freshest flavours. 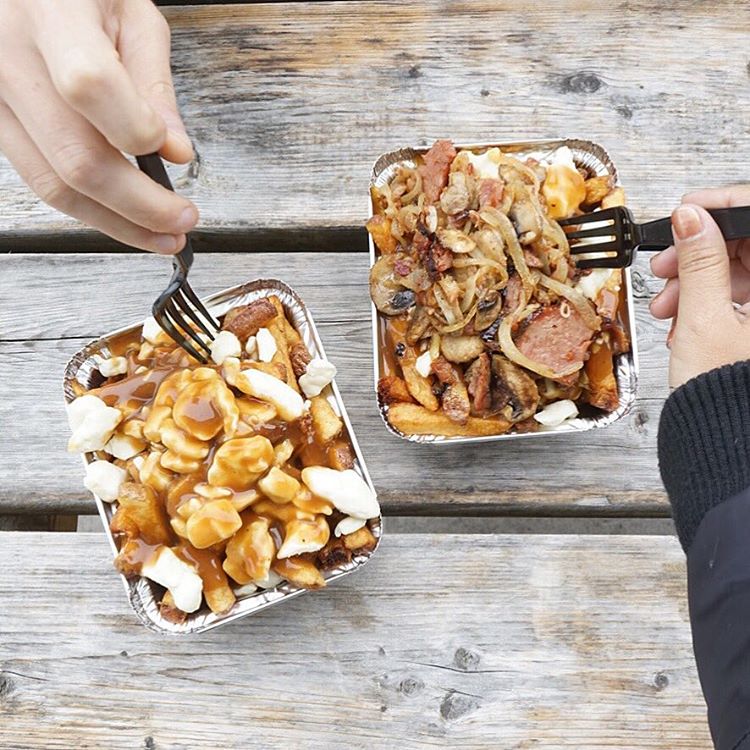 And just like that, your hangover is cured! Poutine is a lavishly indulgent treat, originating in Quebec and made up of fries, cheese curds and gravy. It might not be the first thing that comes to mind when you think of street foods from around the world, but it’s not to be missed. The word “poutine” is Québécois slang for a “mess” but there’s no need to worry about how it looks when it tastes this good!

Get it from: Take your pick at the Ottawa Poutine Festival. Yes, you heard that right, there is an entire festival dedicated to poutine! 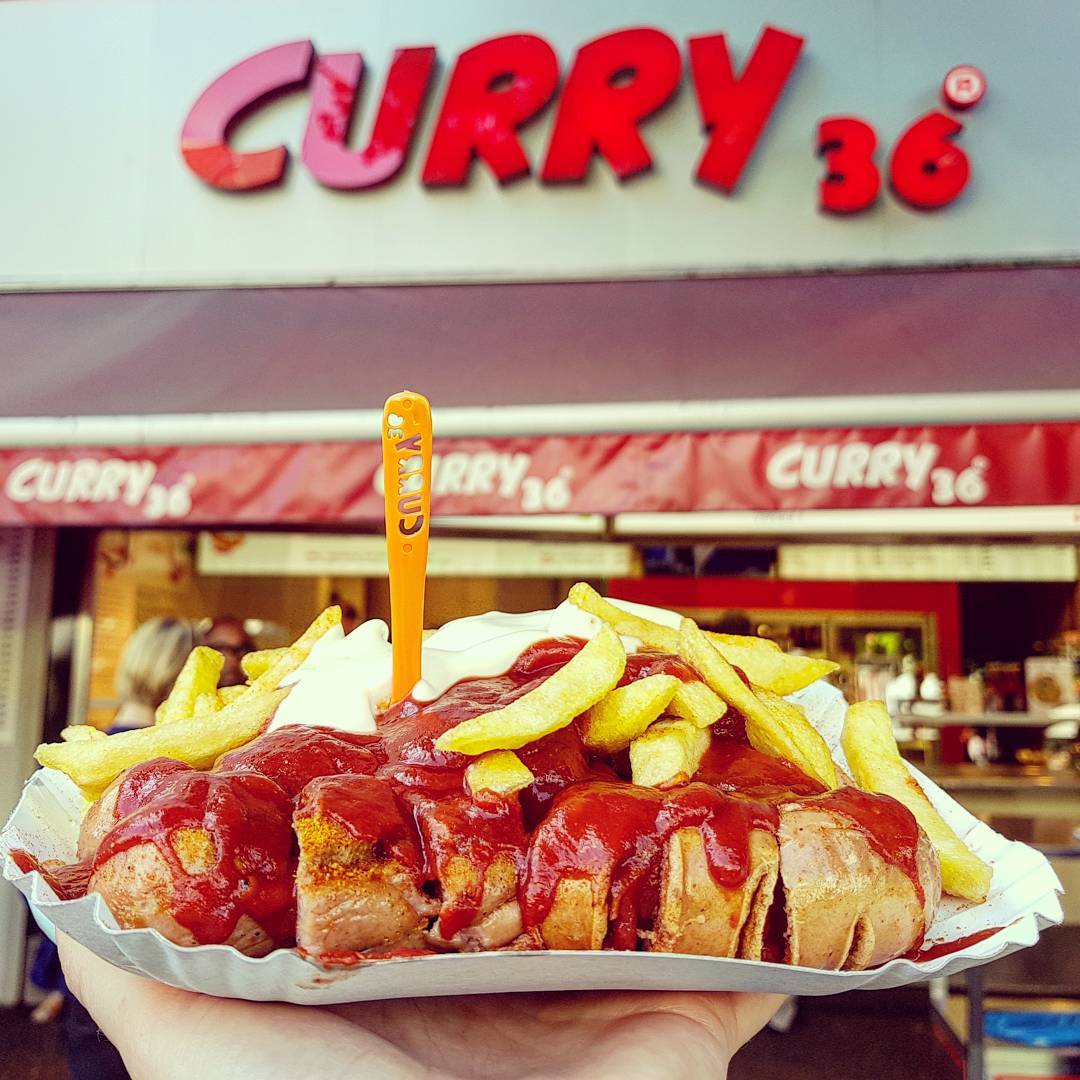 Perhaps not the most sophisticated dish by sight but certainly not the wurst (lolololol). When you first touch down in Germany you need to make a beeline for this traditional dish, which is essentially a ketchup/curry sauce hybrid with chopped pork sausage and fries. Supremely tasty and ever so cheap!

Get it from: Although currywurst is mainly associated with Berlin, you can get this delicious street food creation all over Germany. For the real deal head to Curry 36 – this Berlin street food stand is so popular they’ve even got their own branded merch! 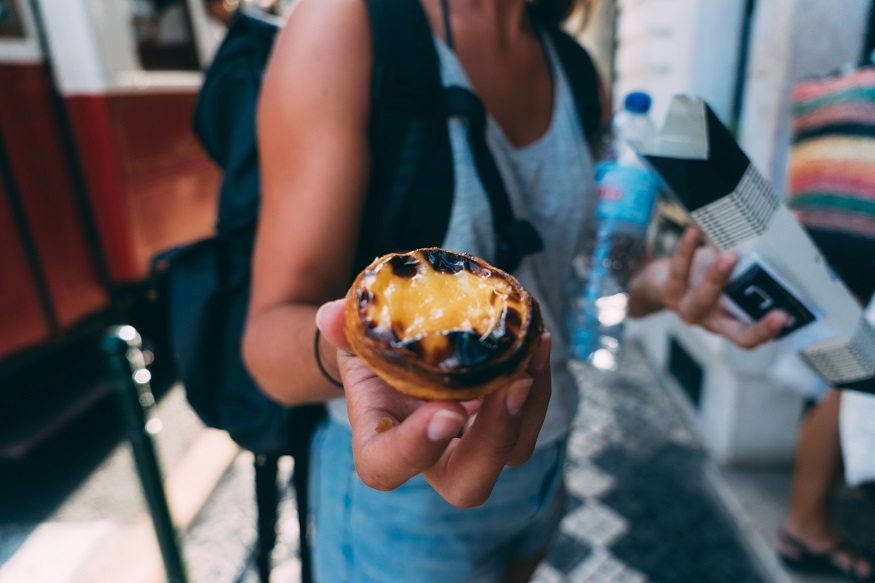 There’s nothing raw or clean about these bad boys, but dammit they’re worth falling off the wagon for. This is Portugal’s answer to the custard tart and the main ingredients are sugar, egg yolks and butter. But because they’re not huge, it’s probably fine for you to have 3 in one sitting. At least that’s what we tell ourselves.

Typical Price: £1
Get it from: The legendary Manteigaria bakery in Lisbon will make all your custardy dreams come true. 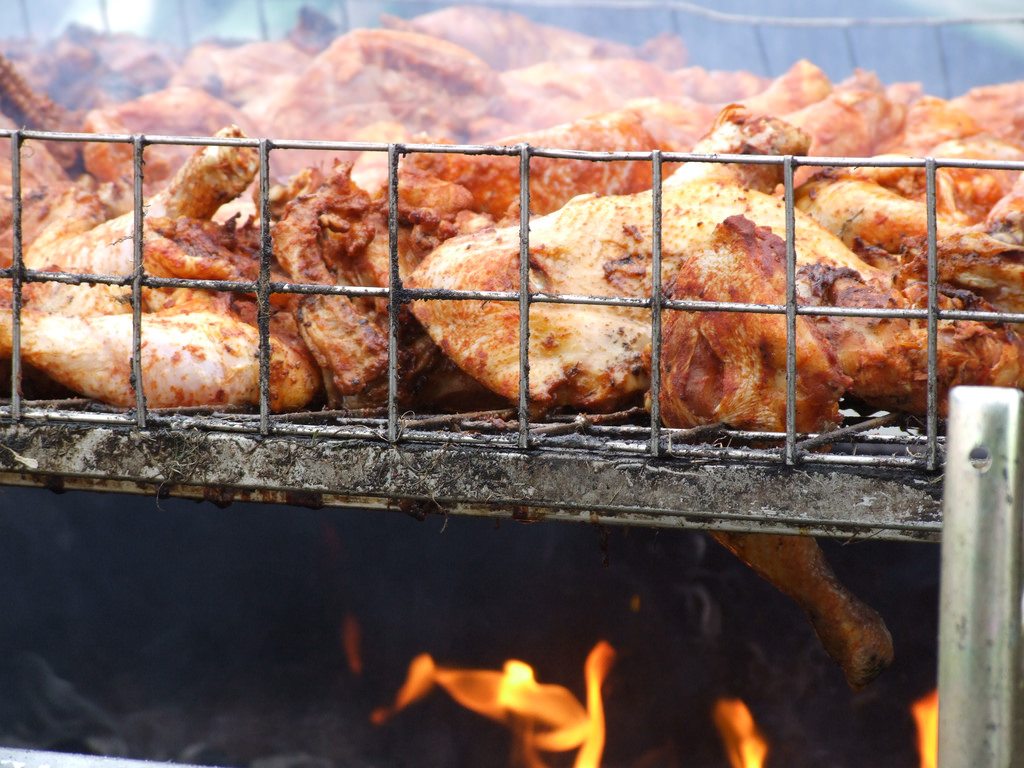 A smoky staple of the Jamaican street food scene, this iconic dish is traditionally served from jerk ‘huts’ with a side of fiery rice and peas. The name ‘jerk’ comes from the jerking or poking of the meat with a sharp object to get the most out of the flavour. You’ll smell the spicy-sweet marinade over the native pimento wood from miles around when these bad boys are cooking!

Get it from: Sweetwood Jerk Joint in Kingston for moreish, authentic flavours in a small and simple shack (make sure you take a tooth-pick with you!)

7. Halo Halo in the Philippines 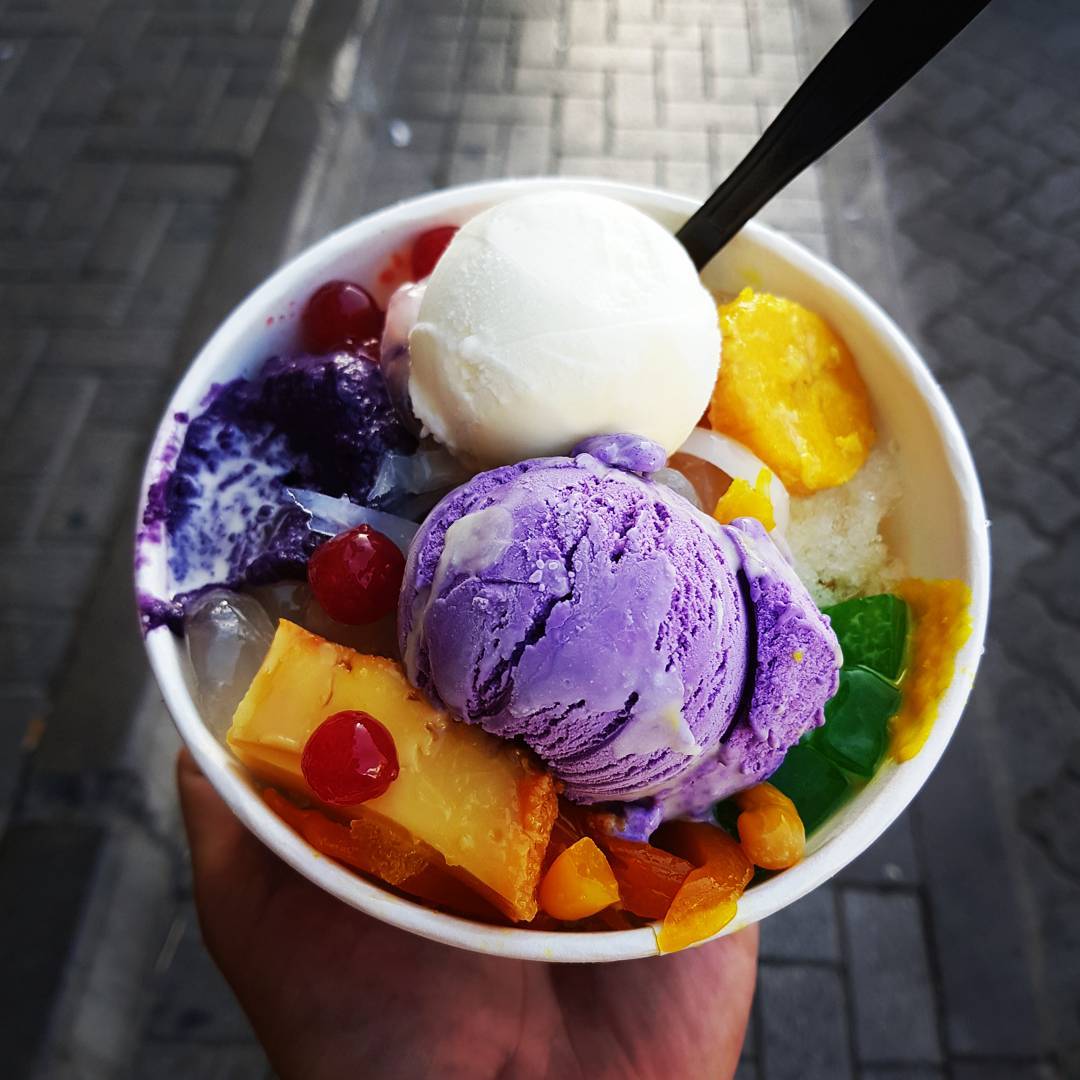 Well, HELLO there halo halo. Definitely one of the most instagram-able street foods from around the world. Translated into English as “mix mix”, the ingredients are up for debate but usually consist of shaved ice, fresh fruit, ice cream, a jelly-like object, a crunchy substance similar to Rice Krispies, and evaporated milk.

A tasty treat for kids both big and small!

Get it from: Lana’s Halo-Halo, Located in the Legazpi City public market. 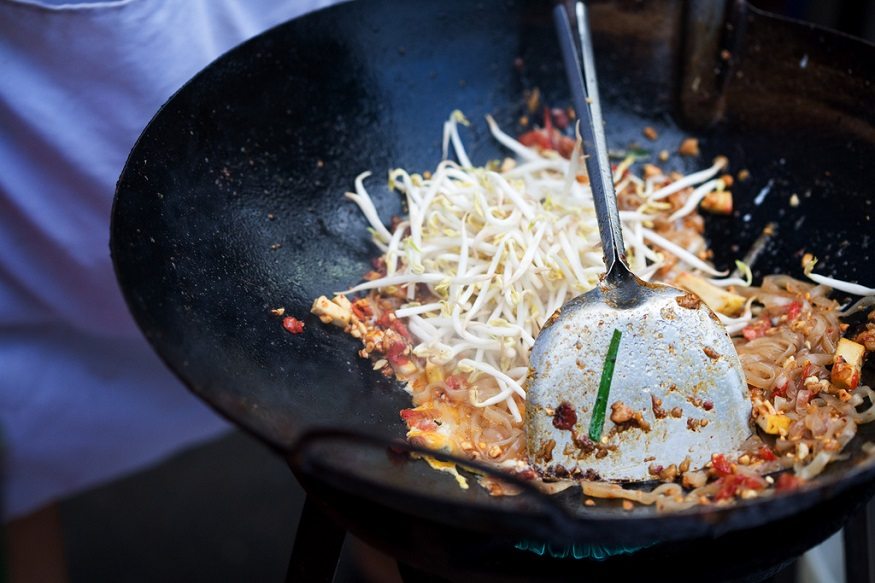 Ubiquitous across the whole of Thailand as a quick and filling meal, this is one of the originals when it comes to street food from around the world. What’s most fascinating about Pad Thai, however, is that it probably isn’t even traditionally Thai. Noodles, stir-fry, and, especially, ‘noodle stir-fries’ are quintessentially Chinese…oo-err. Whatever the origins, this is one street food dish you must not miss when you visit Thailand.

Get it from: The legendary Pad Thai Thip Samai on Maha Chai Road in central Bangkok. Their entire menu is dedicated to pad thai so you know you’re in good hands. Upgrade to the self-proclaimed “superb” version if you’re feeling particularly fancy. 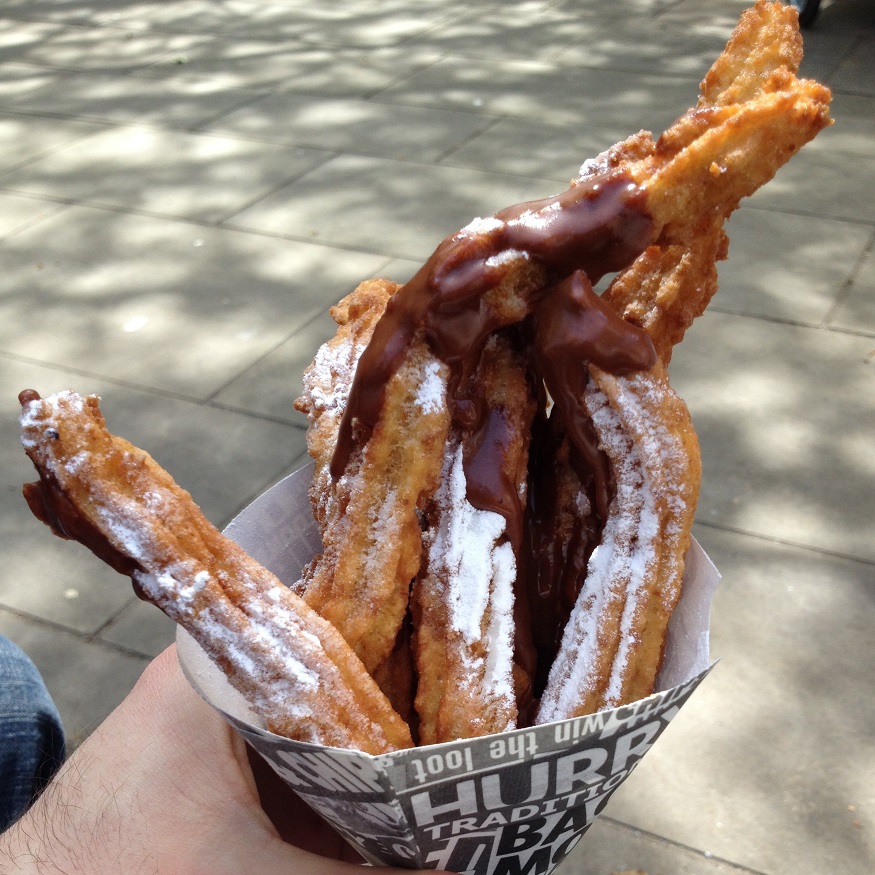 One of the naughtiest but also one of the tastiest street foods from around the world, churros are a MUST for hungry backpackers travelling through Spain. As if these freshly fried donut sticks weren’t delicious enough, they come served with the most divine melted chocolate, either drizzled on top or in a pot for dunking.

Get it from:  Try Chocolat Madrid, a humble little cafe who serve up some of the most authentic churros in the Spanish capital. 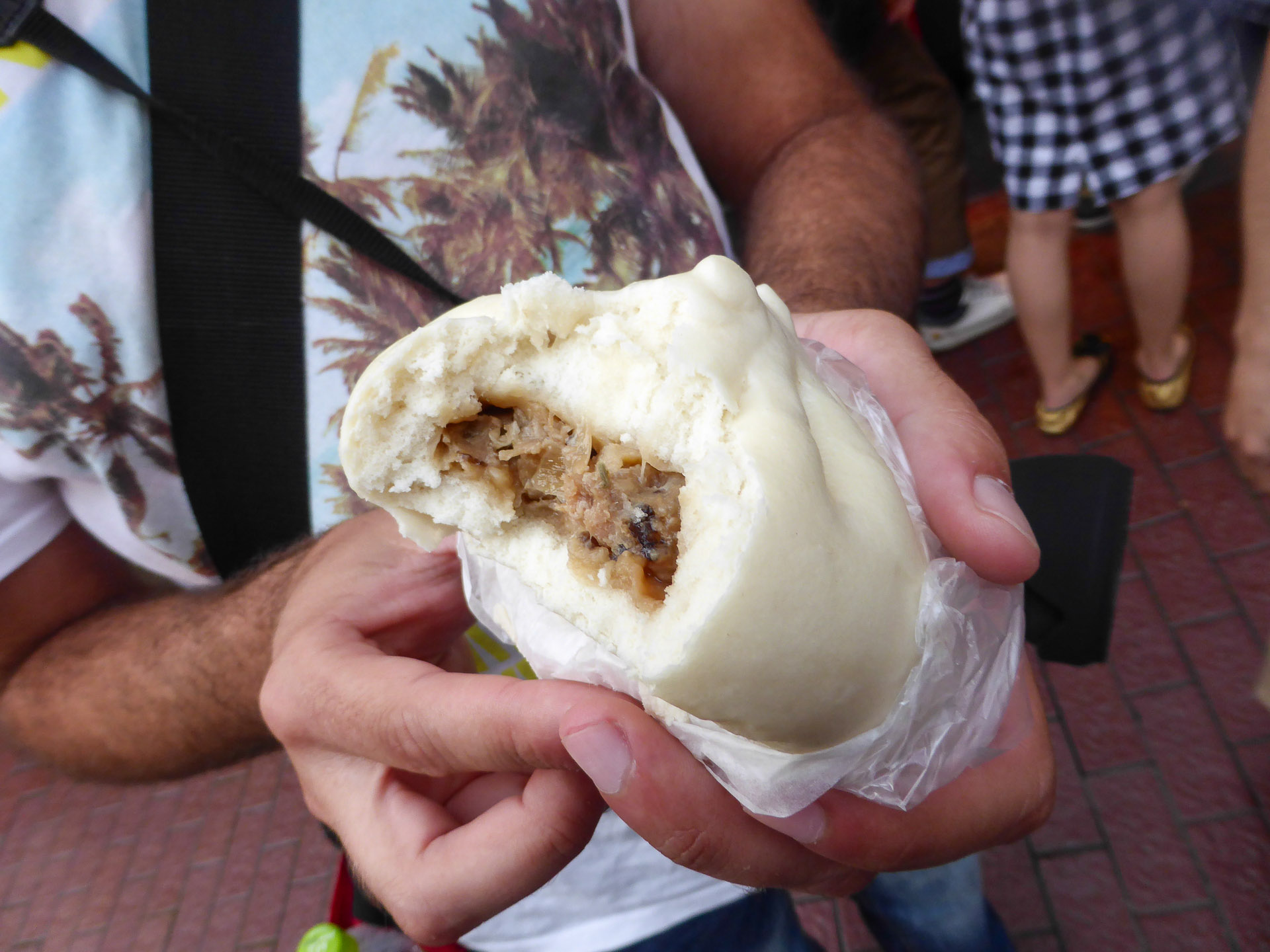 Bow down to the simple bun, or “little eats” as they are sometimes called. The baozi bun is filled with savoury fillings, such as vegetables or meat, and then steamed into the perfect combination of soft and sweet. Eating a bao bun is what it must be like to eat a cloud: fluffy, light and surprising!

Get it from: Fangbang West Street in Shanghai. There’s also good street eating around People’s Park Fabric Market in the South Bund area. 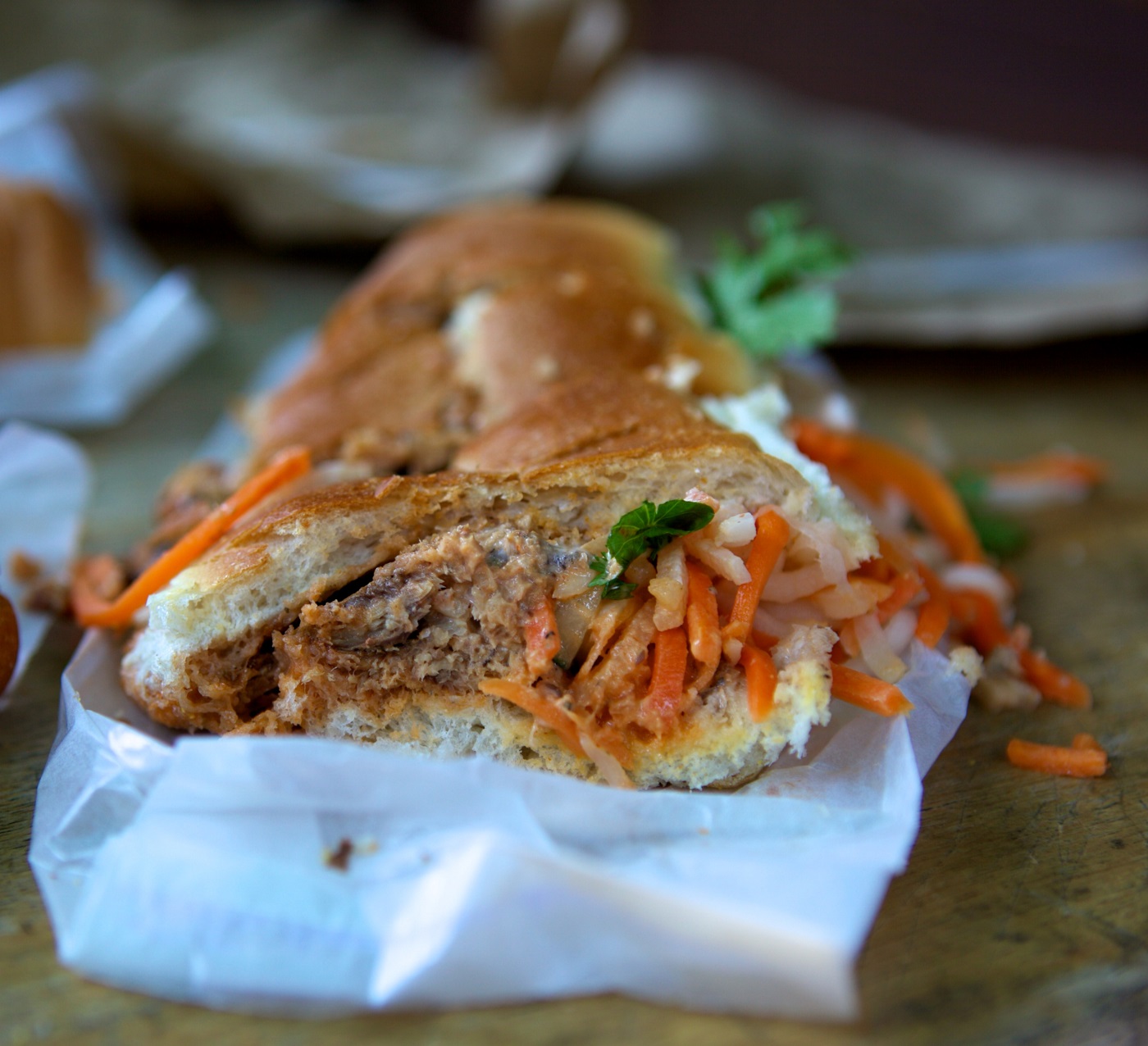 No street food bucket list could fail to mention the epic banh mi. Most travellers who have visited Hoi An never rid themselves of a lifelong love affair with this delicacy. It’s a perfect example of how amazing fusion food can be, teaming a classic French baguette with various delicious Vietnamese fillings. The result is what can only be described as a TASTE SENSATION.

Get it from: The Banh Mi Queen who has been selling street food for almost 50 years, 15 minutes north of the Thu Bon river in Hoi An. She is a legendary tourist destination in her own right. 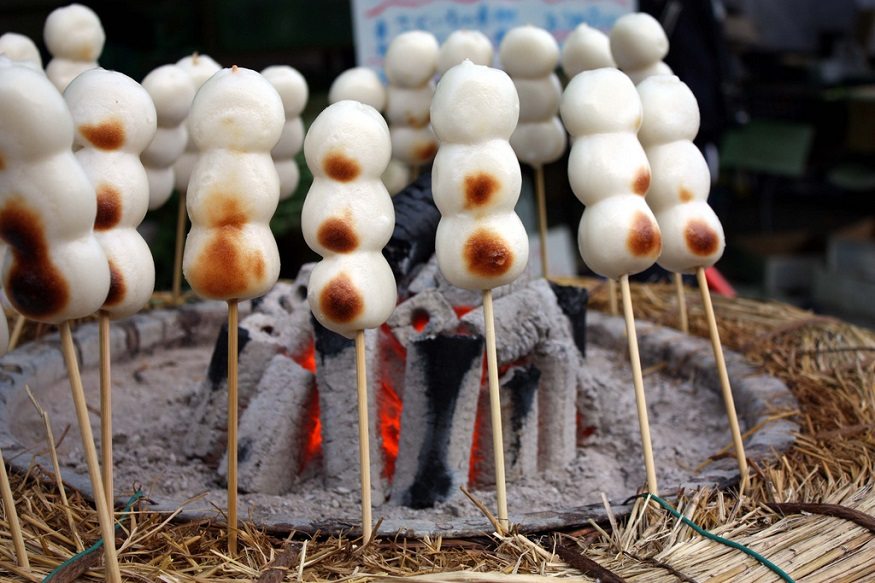 DANG-O these little Japanese dumplings taste good! Served on skewers and cooked over an open fire, the dumplings are made of rice flour and served with everything from sweet chestnut paste to sesame seeds.

Get it from: Outside almost any temple in Japan. We loved the ones outside Kashima Shrine. 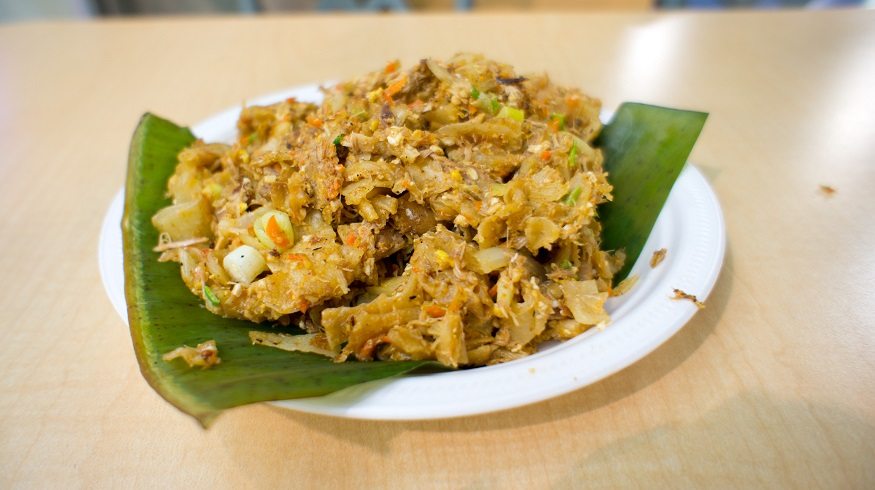 You’ll hear it clanging before you see it. Kottu Roti (meaning chopped bread) has its origins in Batticaloa, in the east of Sri Lanka and is created by mixing together flatbread, egg, meat and spices with two blunt metal blades to a rhythmic beat. Entirely mesmerising to watch, just as satisfying to eat.

Get it from: No1, Dewmini Rotishop in Mirissa, a family run business where you’ll eat on communal tables in the back garden, a little oasis just a stone’s throw from the beach and the main road. 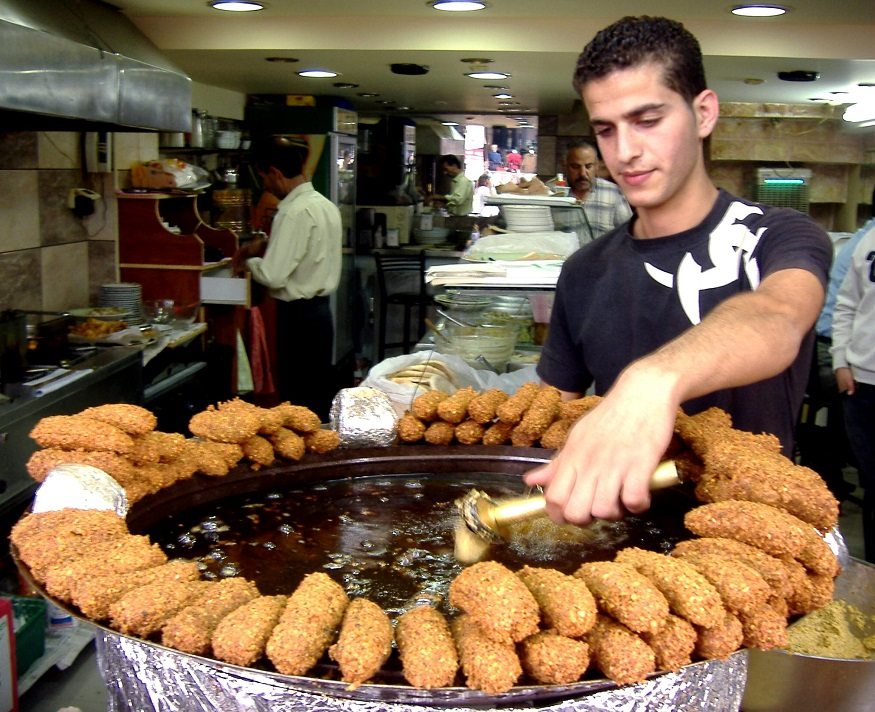 Falafel is now one of the most popular street foods in the world, and can be found almost everywhere. But the phenomenon was said to be born in Tel Aviv, the coastal town of Israel. The classic Israeli falafel is a fritter of ground chickpea spiced with cumin, coriander, paprika, raw garlic, onion, and lots of fresh parsley. So it’s essentially a health food, right?!

Get it from: Hakosem, Tel Aviv where if you’re lucky you’ll be treated free falafel balls as you wait in line at this popular spot. 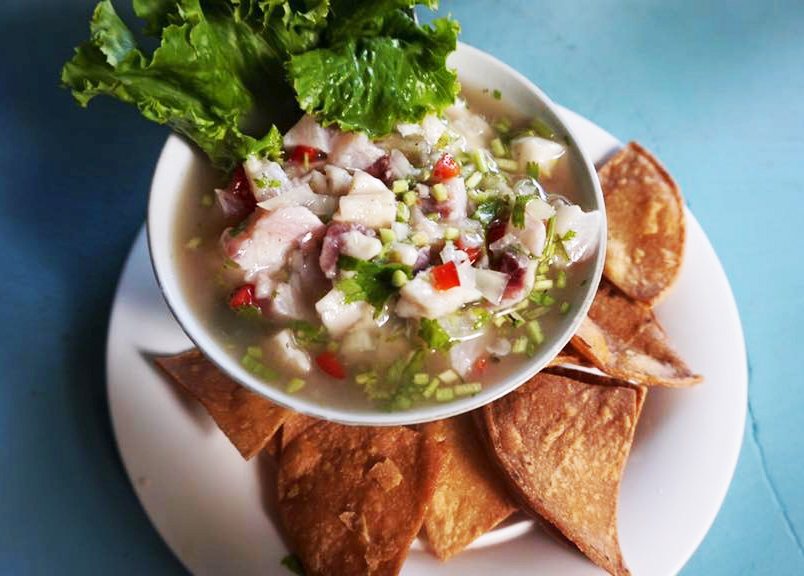 One of the freshest street foods from around the world on this list, and a dish so good it has its own national holiday. If you ever get the chance to try fresh Peruvian ceviche, do not miss your chance! White fish marinated in citrus juice, spiced with chilli and served with tortilla chips on the side = PERFECTION!

Get it from: Hole in the wall Al Toke Pez but get there early as there are only 6 spots at the counter!

16. Poffertjes in the Netherlands 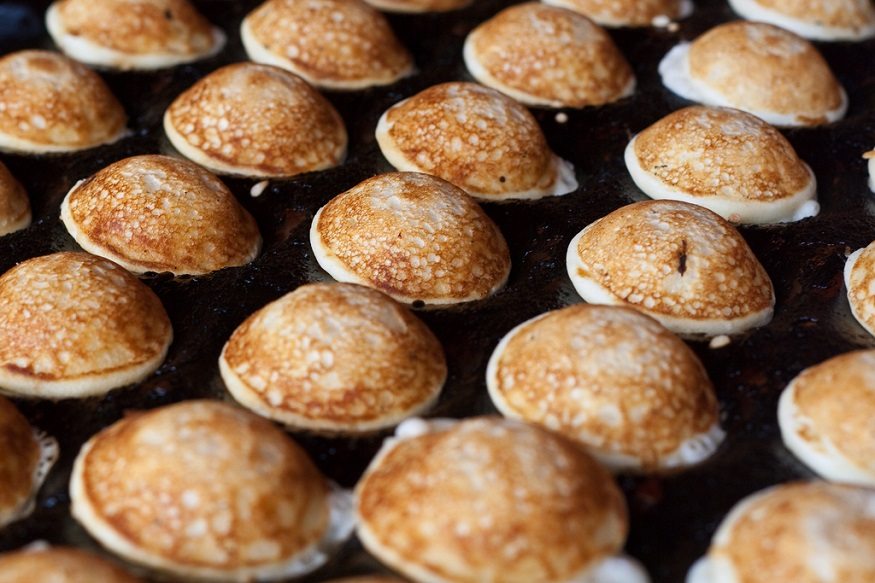 Poffertjes aka mini Dutch pancakes are a simple yet delicious street food dish that everyone should try once in their life. We’re not entirely sure where the fascination with small versions of big things came from but it seems as though Amsterdam were ahead of the game when they started creating Poffertjes. These pancakes are cute AND delicious, and we think that’s a winning combo.

Get it from: All over the Netherlands, but watch out for travelling street food van Pofferdikkie in Amsterdam, for a kitsch take on this traditional classic. 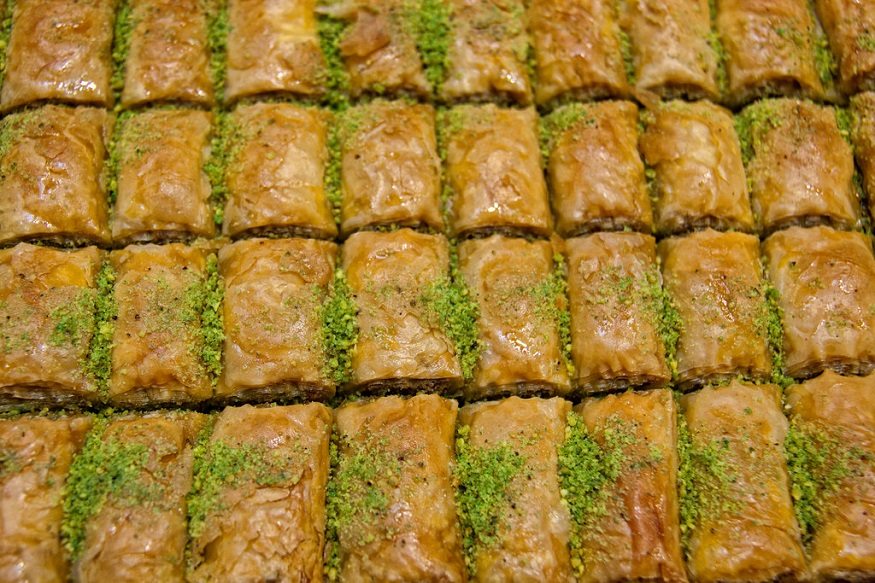 Made from many layers of pastry, oozing with syrup and pistachios and often crafted from a carefully guarded family recipe, Baklava is one epic sugar rush you MUST experience when you visit Turkey. A bag of these heavenly parcels is the perfect accompaniment for watching one of Istanbul’s famous sunsets with friends.

Get it from: Kadıköy Market in Istanbul, where you’ll find a foodie wonderland crammed with all kinds of delicious edibles. 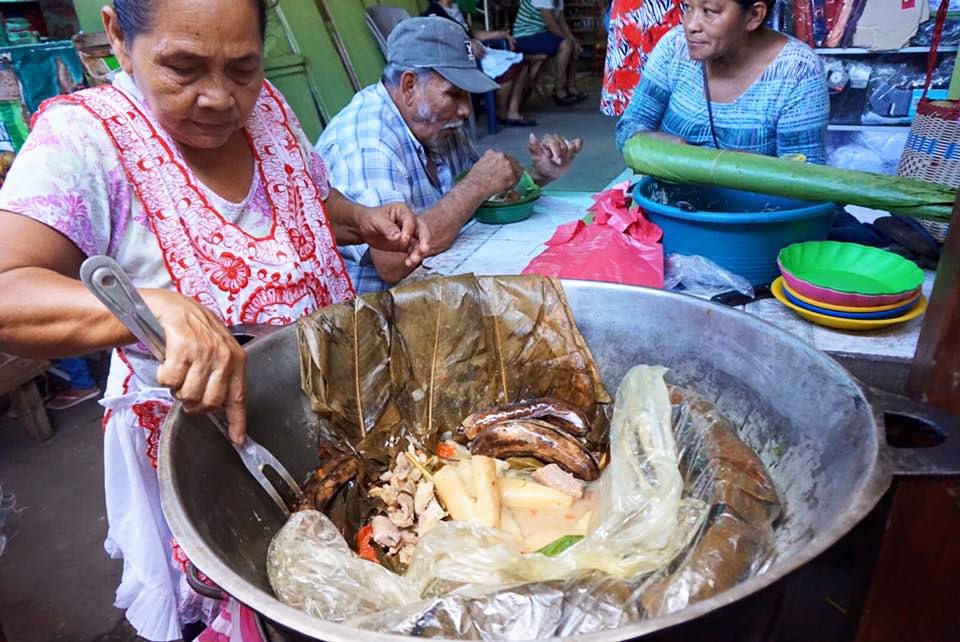 This famous Colombian staple can be eaten for breakfast, lunch or dinner – making them one of the most versatile street food dishes out there. Arepas consist of a ground maize dough and are served with a range of accompaniments, including plantain, avocado, cheese and tomatoes. Yum!

Get it from: the colourful streets of the old walled city in Cartagena for the perfect photo opp. 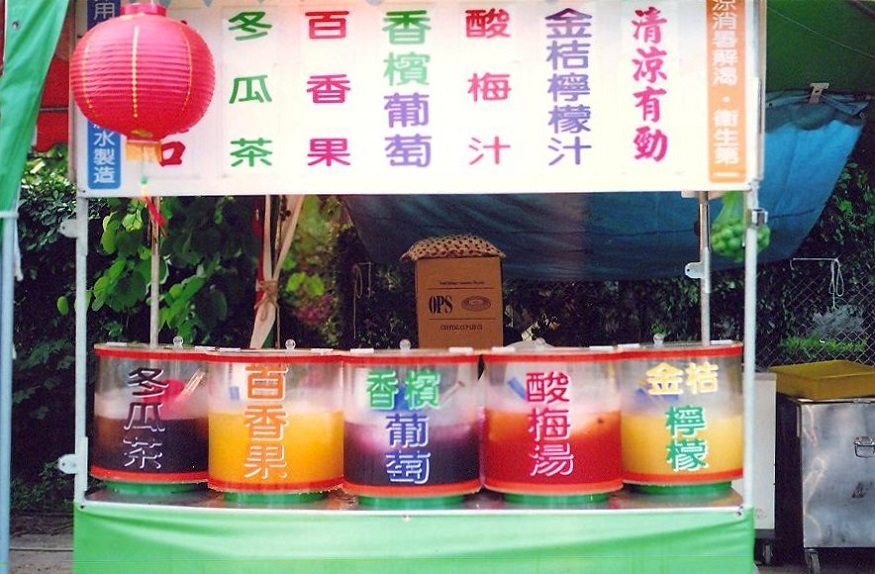 Get it from: LMama (廖媽媽珍珠奶茶), adjacent to the Keelung Train Station 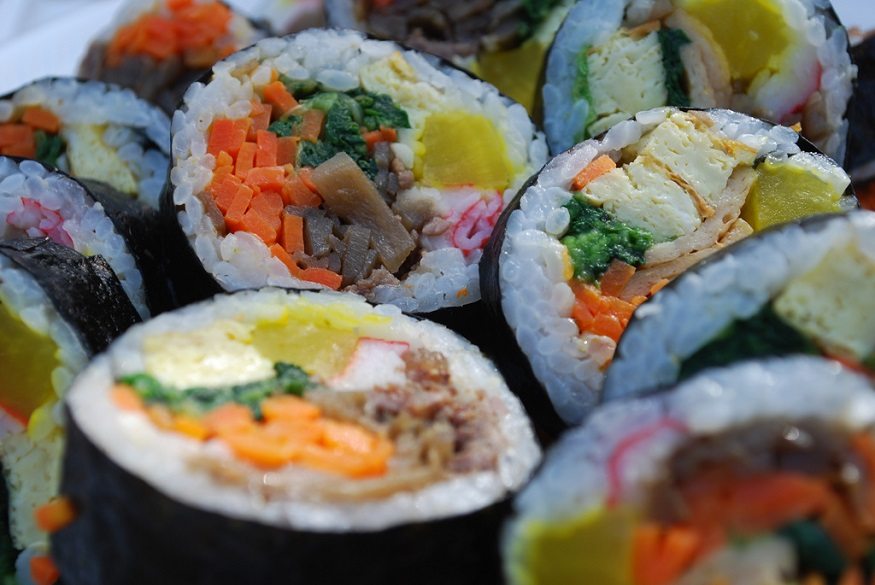 Kimbap is South Korea’s beloved take on Sushi. Packed onto street carts, kimbap begins with a sheet of seaweed that’s filled with rice, a few pickled veggies and a slice of egg and then glazed in oil and sesame seeds. A giant, fancy take on a timeless classic.

Get it from: Head to Gwangjang Market in Seoul where each stall will claim to be selling the “original” kimbap, but try to find the “Mo-nyeo Woncho Mayak Kimbap” stand. 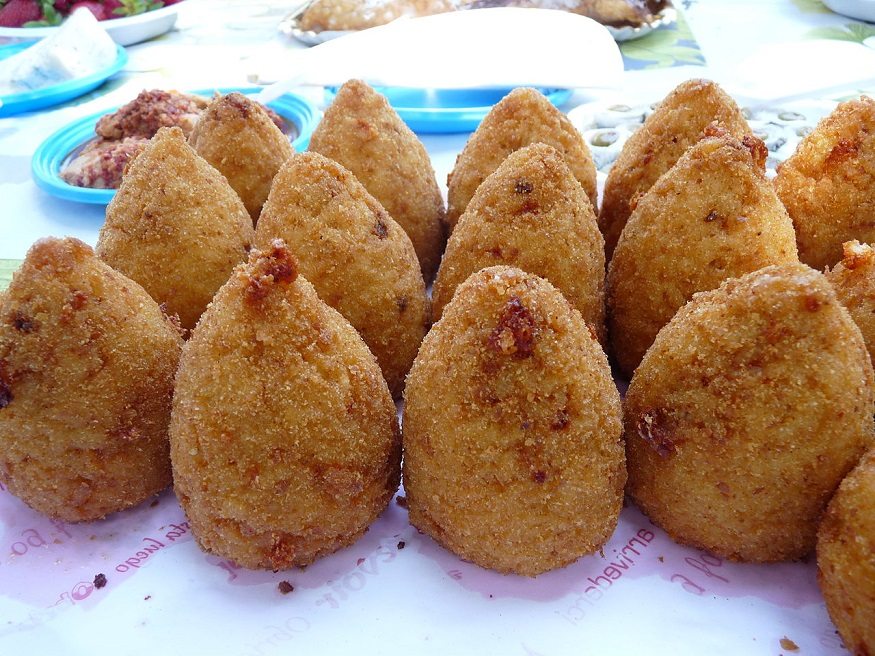 Arancini balls were invented when an ancient emperor wanted to carry his rice around with him whilst hunting. The balls were easily transportable, non-perishable and tasty. They’re deep fried in breadcrumbs and typically filled with risotto rice, mozzarella and ragu.

Get it from: A hole in the wall called Da Arianna, hidden down Palermo’s backstreets in Sicily where they produce hundreds of arancini balls each day.

Do you LOVE food? Then make your travels even more awesome by booking a social foodie event with our friends at Vizeat! 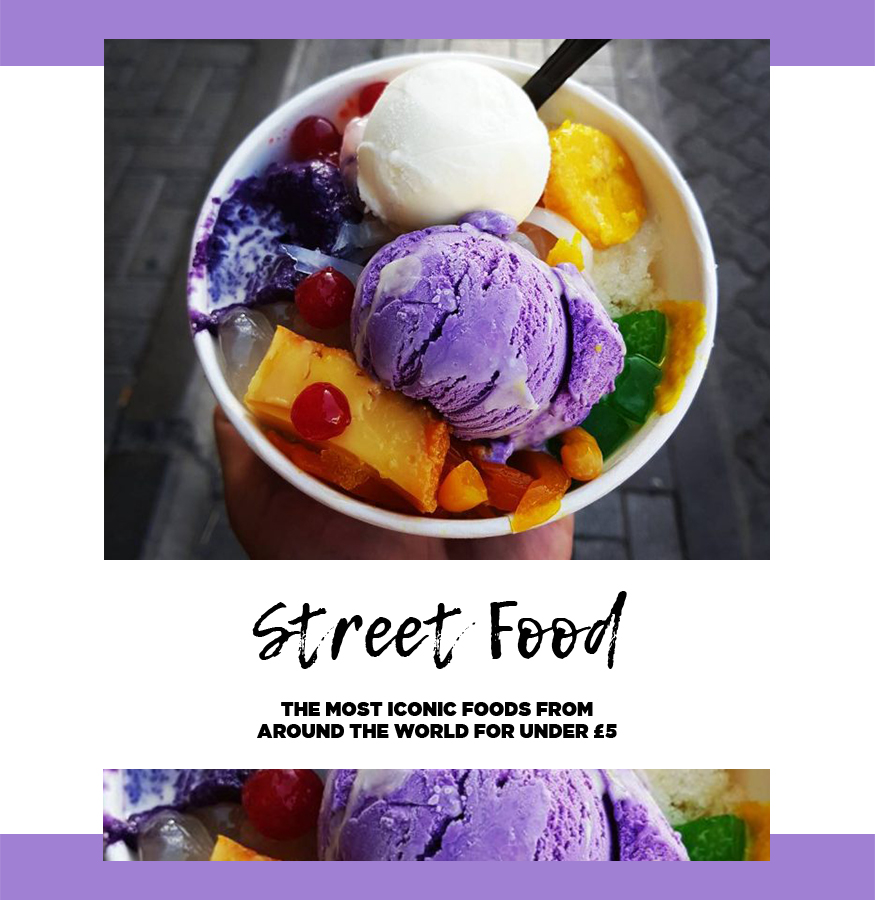 What are some of your favourite street foods from around the world? Tell us about it in the comments below for the chance to feature ?