Where do you find the best coffee in Dublin? Or the best place to try craft beer? How about a secret bar only the locals (and Matthew McConaughey) know about, or knowing which Sunday is best for picking up vintage clothes at bargain prices?

Dublin’s never been more exciting if you’re after a few days of urban hedonism. Go to Ireland for your next trip away, and work through this A-Z to find out why Dublin is the world’s coolest city to visit right now…

Beer geeks will love Against the Grain, a buzzing craft beer bar just west of St. Stephen’s Green with rows of local and international brews on tap, plus over 80 bottled beers from Ireland and around the world. Owned by the Galway Bay Brewery, drop in to try anything from Galway Hooker to Anchor Steam from San Francisco, as well as a well-chosen selection of ciders and whiskeys. 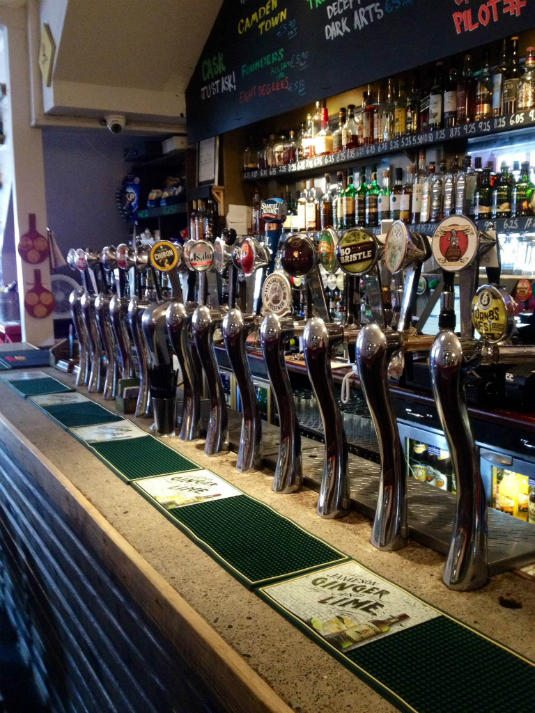 The Bald Barista – aka owner Buzz Fendall – is regularly tipped as serving the best coffee in Dublin, with beans sourced direct from farmers and freshly ground on-site. Coffee comes with a smile and a picture drawn in foam on top, and there are sandwiches and biscuits to nibble on. Attached to Avalon House Hostel, this is an awesome spot for grabbing a brew before a day of exploring. 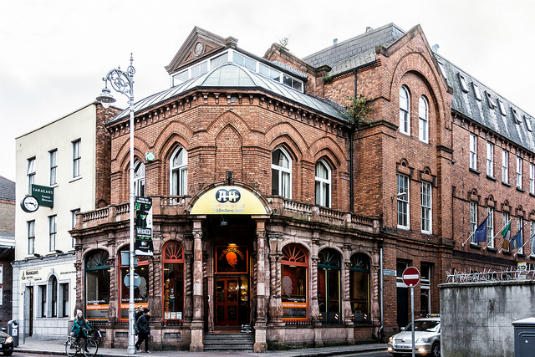 With its fried chicken menu and spritzers served in jam- jars, this hipster hideout in Temple Bar ticks all the ‘2014 restaurant’ boxes… but what really makes it stand out is how good the bird tastes (hence the cheeky name). Choose a whole or half chicken fried in Szechuan pepper, soy and garlic or buttermilk batter, and accompany with everything from BBQ staples slaw and chipotle baked beans to sweet potato noodles. 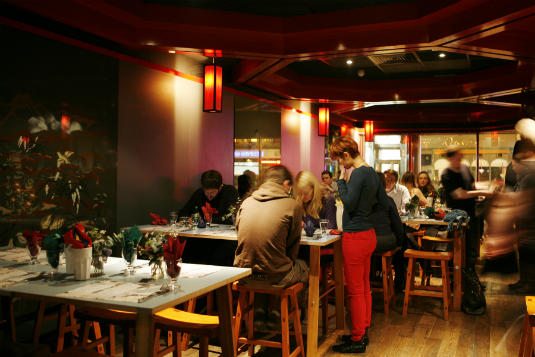 See amazing views of Dublin with a rooftop stroll on the Etihad Skyline at Croke Park stadium. There are five viewing platforms with different sights to spot at each including Glasnevin Cemetery, Guinness Storehouse and Kilmainham Gaol. If you’ve got a head for heights, you can also brave the walkway suspended above the pitch 17 storeys below. 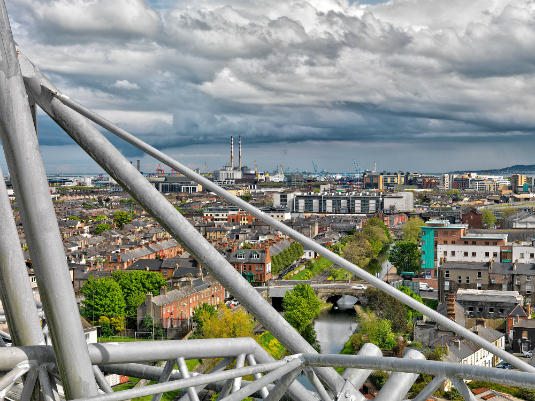 Hidden behind Dublin Castle, Dubh Linn Gardens isn’t usually troubled by anyone but lunch-breaking locals, making it a secret spot of calm in an otherwise touristy part of town. Its circular grassy area sits on the site of the Black Pool – or Dubh Linn in Irish – which was used to moor ships during Viking times, and gave the city its modern name. Today, you can take a break on one of the benches lining the grass. 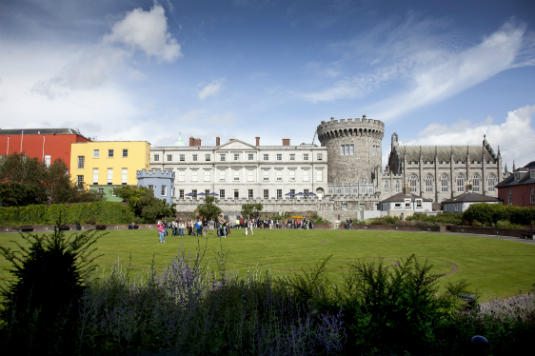 Still seen as a bit rough round the edges, the Epicurean Food Hall’s now riding the foodie revolution wave and is home to some adventurous new stalls. Head to Ugly Duckling for American-style sandwiches like po’boys and brisket baguettes (read The Life of Stuffs’ mouth-watering review), and wash down with coffee from La Corte – another forerunner for the best cup o’ Joe in Dublin. It’s also in hopping distance of three Dublin landmarks – Ha’Penny Bridge, the River Liffey and O’Connell Street. 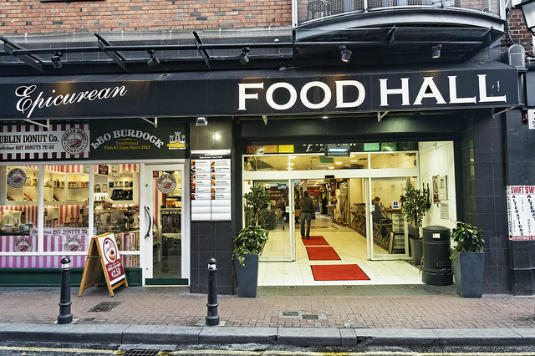 Sunday markets at Dublin Food Co-Op are where it’s at for vintage- lovers, letting you pick up everything from 90s frocks to 50s record players.

From Thursday to Friday, the co-op specialises in stalls selling organic and wholegrain produce. 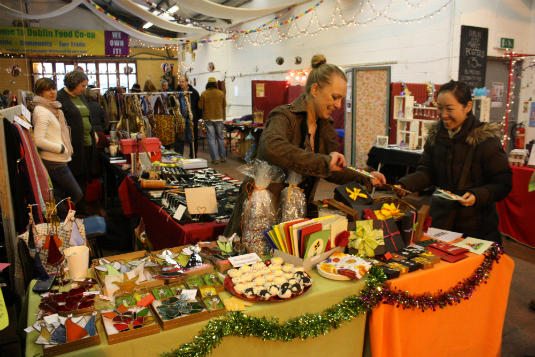 Visit the contemporary Green on Red Gallery just north of Trinity College for dynamic and exciting shows from Irish and international artists. Expect a constantly changing schedule: there are 10-11 solo shows a year, as well as two large, thematic exhibitions and a roster of talks and events.

Ireland’s most-visited attraction tells the story of Guinness, from how it’s made to its iconic, award-winning advertising, over seven floors of its former St. James’s Gate brewery. See panoramic views of Dublin from the rooftop Gravity Bar, or head to the VIP bar to taste different kinds of the black stuff in the Connoisseur Experience. 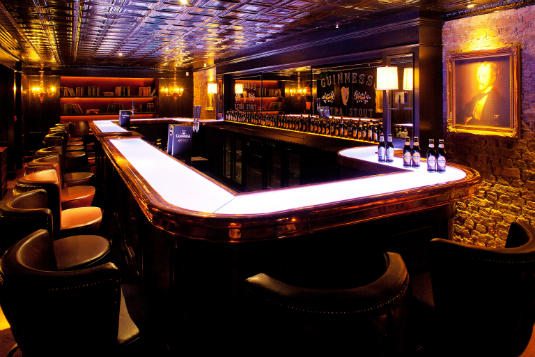 Quite simply the best-kept secret in Dublin, you could walk past the Hacienda for years without realising there’s a pub behind its yellow door. To enter, you need to do the rather nerve-wracking thing of ringing the doorbell, but once you’re in it’s all good times, with 80s tunes on the juke box, a pool table, Guinness on tap and pics of the pub’s most famous patron Matthew McConaughey on the walls.

Right in the centre of Dublin’s Temple Bar, the IFI has three cinemas showing new independent films, classics and film festival programs. There’s also a specialist DVD and book store, national film archive and café bar. The beautifully restored premises are great for a wander – make sure to track down the genuine Oscar statuette that’s on display in the foyer. 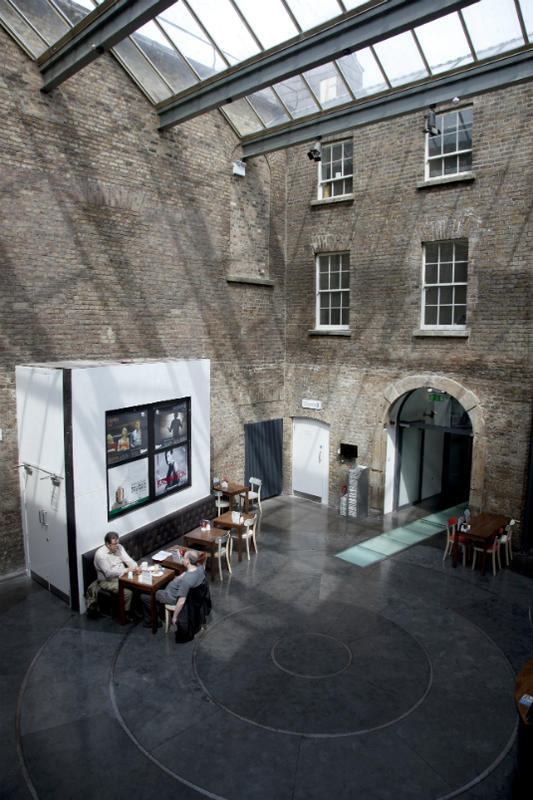 Visit replica tall ship the Jeanie Johnston to get under the skin of a dark part of Irish history. With famine killing one eighth of the population in the 1840s, millions escaped to America in transport ships like this, in search of a new life. The tour takes you below deck to see the cramped conditions and hear real passengers’ stories. Docked at Custom House Quay in the city centre, you can also see famine memorial statues by artist Rowan Gillespie near the ship. 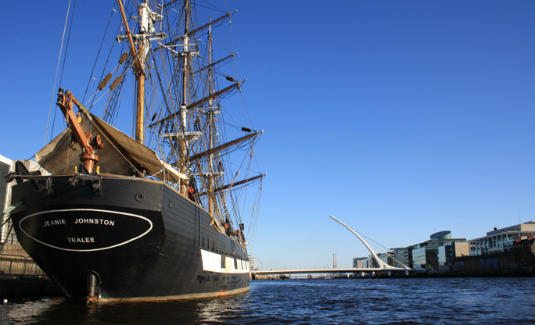 Kilmainham Gaol is Europe’s largest empty prison, a bleak yet fascinating place that exists now as a monument to Ireland’s struggle for independence. Nearly all significant Irish rebel leaders were held here during uprisings against English rule between 1798 and 1916, and leaders of the 1916 Easter Rising were executed in the prison yard. Today, engrossing tours take you through the history of the prison up to its closure in 1924 and ’60s restoration. The jail is a 25 minute bus ride from O’Connell Street in the city centre.

The Little Museum of Dublin

This definitely isn’t your average dusty old museum – the Little Museum‘s affectionate and irreverent history of 20th century Dubliners charms everyone who steps through its door. Humorous guides give free hourly tours through the three story Georgian house, where everything from ’70s Aer Lingus posters to WWII gas masks weave together to tell the story of Dublin. 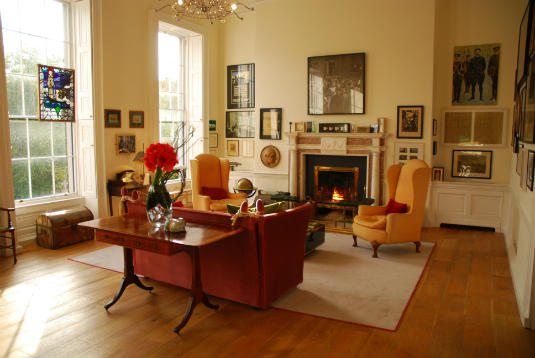 There are so many festivals for getting your rave/mosh/indie shuffle on to in Dublin, I’ve lumped them into a catch- all ‘M for Music’ category. Here’s your festie hit-list for getting your groove on over summer… 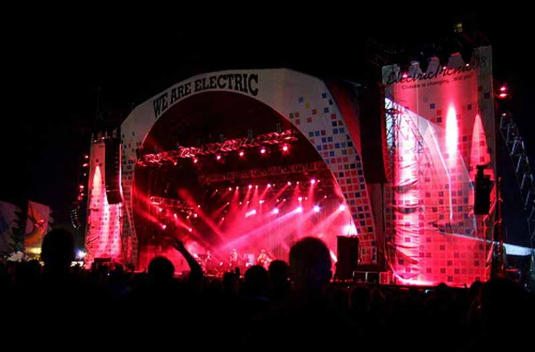 To dig in to Irish culture and history for free, head to the National Museum of Ireland which sits across three sites in Dublin. Most Instagrammable is the Natural History Museum, known as ‘The Dead Zoo’ for its taxidermy animal exhibits that haven’t changed in over 150 years. It’s a museum of a museum, as popular for being a Victorian curiosity as for its actual content, which includes skeletons of 11,000 year old giant deer, Spoticus the giraffe and whale skeletons suspended from the roof. 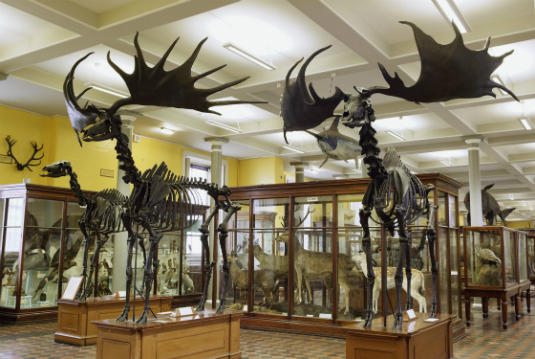 The museum of Decorative Arts & History in Collins Barracks has design-related ephemera like thousand year old Irish coins, while the museum of Archaeology on Kildare St displays Iron Age bog bodies and Celtic and Medieval art.

You’ll probably find yourself on O’Connell Street without seeking it out, this being Dublin’s main artery and the widest street in Europe. It’s home to the Spire, a towering silver pin-point that holds claim as the world’s tallest statue, completed in 2003. The street was also ground zero for the 1916 Easter Rising, an attempt to end British rule by force which paved the way for Irish independence. You can still see bullet holes in the O’Connell monument statue from the resulting gunfight, and the stately GPO (General Post Office) which dominates the street is a restoration – all but the facade was burnt down after being taken over as rebel headquarters. Still a working post office, the GPO is well worth a look for its symbolic place in history, as well as for being one of the most beautiful examples of Georgian architecture in the capital. 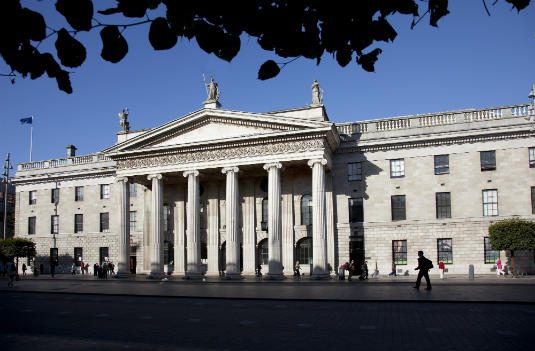 Pallas Projects/Studios is a non-profit, artist-run space in a converted school just north of St. Patrick’s Cathedral. Exhibitions and events regularly take place in the gallery space and school yard, making it the best place to discover new art coming out of Dublin’s grassroots scene. See their website and Facebook page for announcements on current and upcoming events.

The Queen of Tarts

If Cows Lane’s design shops prove a little hard-wearing, get your strength back at the Queen of Tarts. This cute little bakery and café will stuff you with treats and tea until your sweet tooth can take no more – try the Bailey’s chocolate chip cheesecake, or their pillowy scones with a fresh pot of Darjeeling. It’s all served on mismatched crockery straight out of your gran’s living room, and there’s a savoury menu of quiches and soups for lunch.

Dividing Dublin into north and south sides, you can’t miss the Liffey. Take a sight-seeing walk along it, or check out Dublin’s sights from a whole new angle with City Kayaking. This is the only company to offer kayaking through central Dublin and is sure to get your adrenaline pumping as you explore.

The Science Gallery in Temple Bar is free to visit, putting on exhibitions around intriguing themes – such as risk, illusion or climate change – through live experiments, expert talks and interactive installations. There’s no permanent collection, so only the café and shop are open in-between exhibitions – make sure to check the schedule on their site before you go. 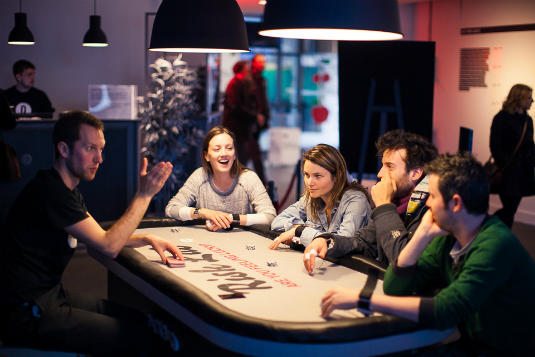 Alongside The Button Factory in Temple Bar, the Twisted Pepper is Dublin’s best venue for clubbing. A craft beer and cocktail bar in the evening and gig venue/house and techno club by night, good times roll until the early morning here.

The U2 Wall and Windmill Studios

The U2 Wall on Windmill Lane just south of City Quay has real cultural significance – the graffittied lyrics and fan messages covering their ’70s recording studio here display the devotion the band has inspired in their three-decade career. Don’t go thinking you’ll see Bono and co. turn up for a recording sesh, though – Windmill Lane studios has since moved to Ringsend Road. 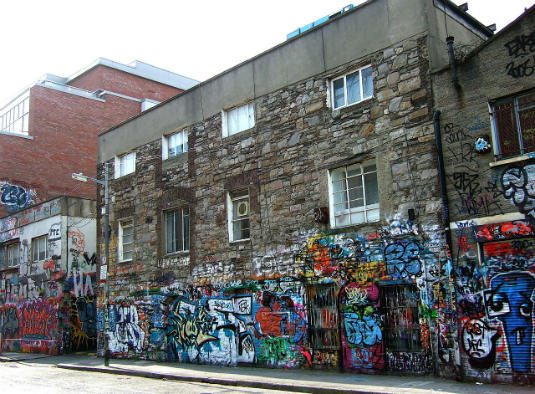 The Viking Splash Tour is the most fun you can have on four wheels in Dublin. Taking place in an amphibious bus that plunges into the Grand Canal (awesome), you’re treated to a Viking-themed history of the city from a hilarious guide – all while wearing a helmet and shouting “yaaargh!” at passers-by (double awesome). 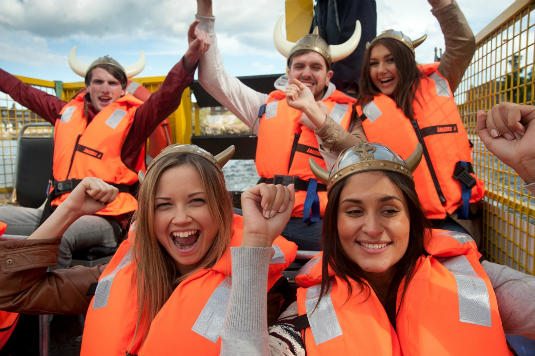 Celebrating Irish writers James Joyce, Bram Stoker, Jonathan Swift, Oscar Wilde and Nobel Prize winners William Butler Yeats, George Bernard Shaw, Samuel Beckett and Seamus Heaney among others, the Dublin Writers Museum is a must if you love the written word. A free headset audio tour accompanies the exhibition, whose two rooms are split between early writing up to the 19th century, and 20th century literature.

Talks covering everything from ‘Work Hacks’ to ‘The Art of Opportunism’ have been on the agenda at previous TEDx Dublin shindigs – and this year’s sold out September 13th event at The Bord Gáis Energy Theatre promises the same diverse mix of speakers and ideas to get you thinking. You can watch this year’s talks at tedxdublin.com, or attend in person at the September 2015 event next year. 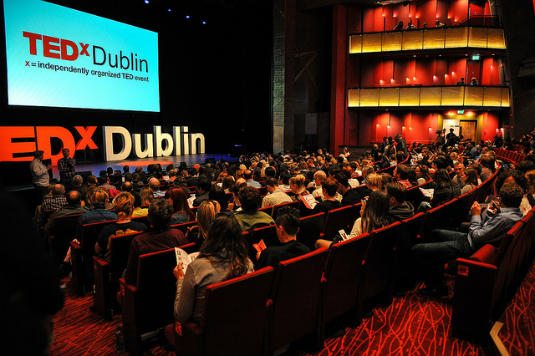 Fro-yo is ice cream without the guilt, so nothing should stop you getting down to Yogism in Georges Street Arcade east of Dublin Castle. You pay by weight (and if you guess the weight correctly, it’s free!), and choose between 30 toppings including berries, Smarties chocolate and natural gummy bears.

Dublin Zoo in Phoenix Park was founded in 1830, and today puts huge emphasis on endangered animal conservation. Visit now for the added cute-factor of seeing elephant calves and an Asian lion cub. This isn’t the zoo’s most famous feline, though – that would be Cairbre, the lion that roars at the beginning of Metro-Goldwyn-Mayer films. He was born at Dublin Zoo in 1927. 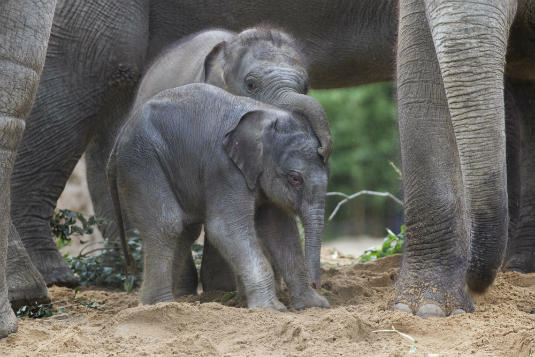 Looking for somewhere to stay in Dublin that’s fun, in a central location and won’t break the bank? Look no further than these beauties…