Greetings fellow travellers! My name is Iami, I’m a #hostelworldinsider and I would like to share with you all how hostels changed my life.

In 2016 I decided to stop college for 6 months and explore Southeast Asia. I’d lived my whole life in Porto Alegre, a city in the south of Brazil, and to be honest, before that trip I didn’t even really understand what a ‘backpacker’ or a ‘hostel’ was. But there I was, researching ways to make my trip possible when I came across the idea of working in a hostel. I’d never travelled alone, had never been to Asia and was going to work in the kind of place I had never even visited. Seemed like a great idea though!

After two days of flights, I arrived in Bangkok and headed (on public transport because I was feeling #brave) to Siam Journey, my first hostel ever. The girl at the front desk was Brazilian, which felt like a good sign. I stayed there one night and two days, healing from the jetlag for most of the time. I talked briefly with some people, ate some delicious food in a street market nearby and then it was time to head to Krabi. This was the place I was going to work, in the amazing hostel Bananas Bungalows. 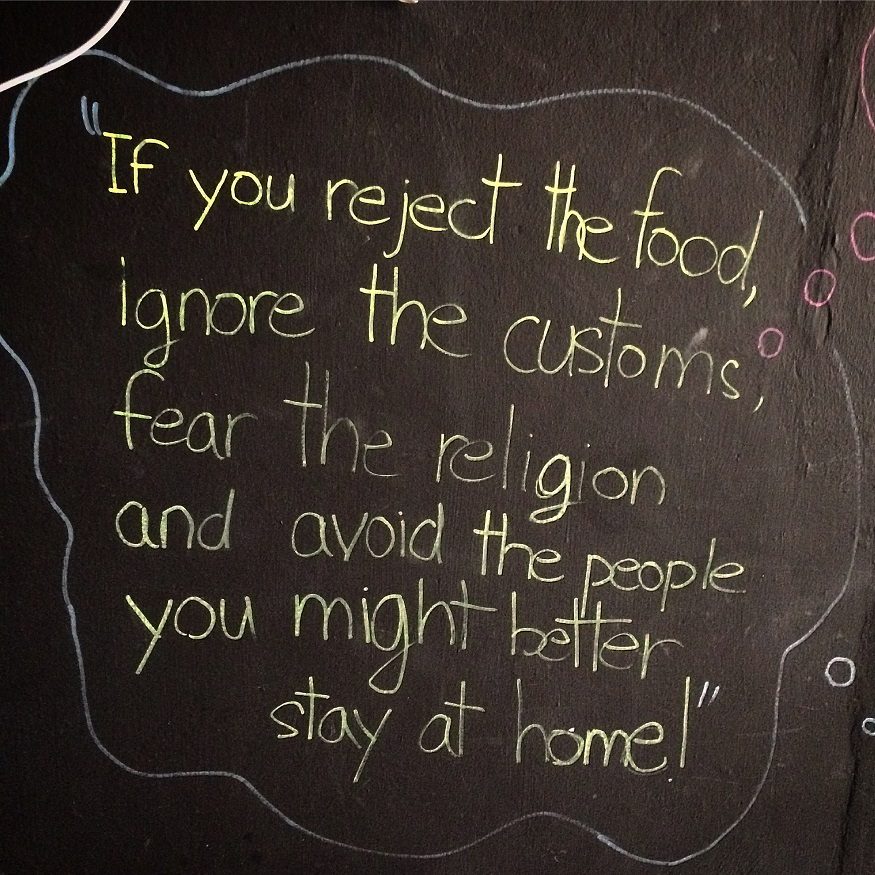 A sign next to my bed in my first ever hostel

In the car from the airport to the hostel I couldn’t hide my shock, or even close my mouth. Green mountains were everywhere around me, nature in a way I’d never seen before. On my first night I swam with luminous plankton in warm water, a memory that’s still one of the most magnificent moments of my life. If I moved, the water would glow. So there I was, in wonderful Thailand, in this beautiful hostel, listening to other travellers exclaim “OMG, I feel like a fairy!”

The guests were, 98% of the time, lovely people. I had great conversations, learned a lot and laughed a lot. Most people stayed only 2 or 3 nights and it was weird saying the last goodbye. Yes, very sentimental, but also true. In a hostel you can have brief but very intense meetings, and it’s hard to say goodbye knowing that it could actually be the last word you’ll ever say to a person. 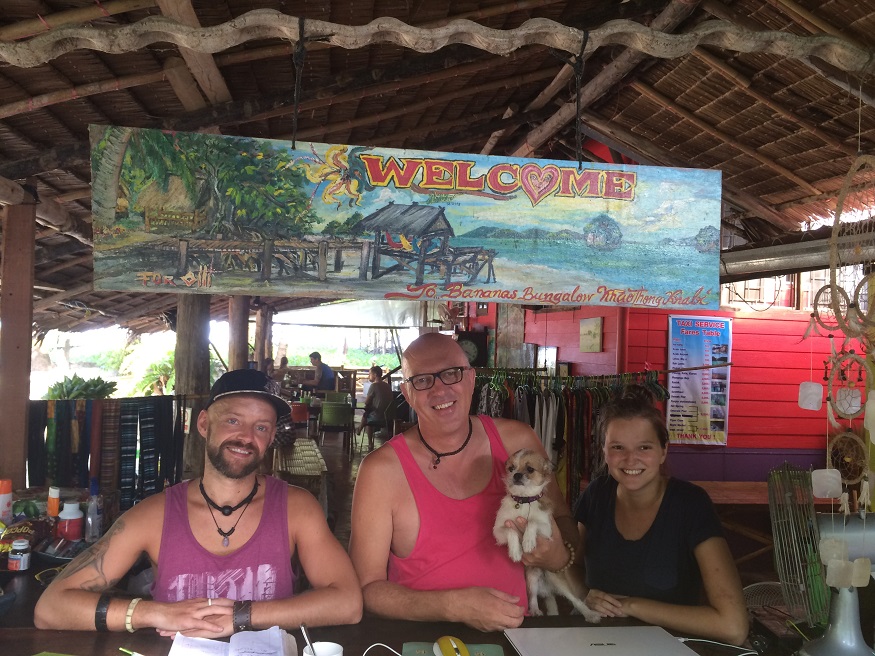 At Bananas Bungalows, two Austrian sisters were the first people I connected with. They told me many times that I should visit and could stay with them in Vienna. I have them on Facebook, but we never talked after those four days they stayed. If I ever go to Vienna though, I think I’ll give them a virtual ‘hi’ and invite them for a beer.

My time in Bananas Bungalows was full of random people, a few setbacks (like my phone sleeping for a night in the ocean and a very rude guest) and some truly great moments. One of the guests, a Mexican girl I had amazing conversations with about everything from football to religion, wrote me a letter before leaving which I keep in my ‘important life stuff’ box. 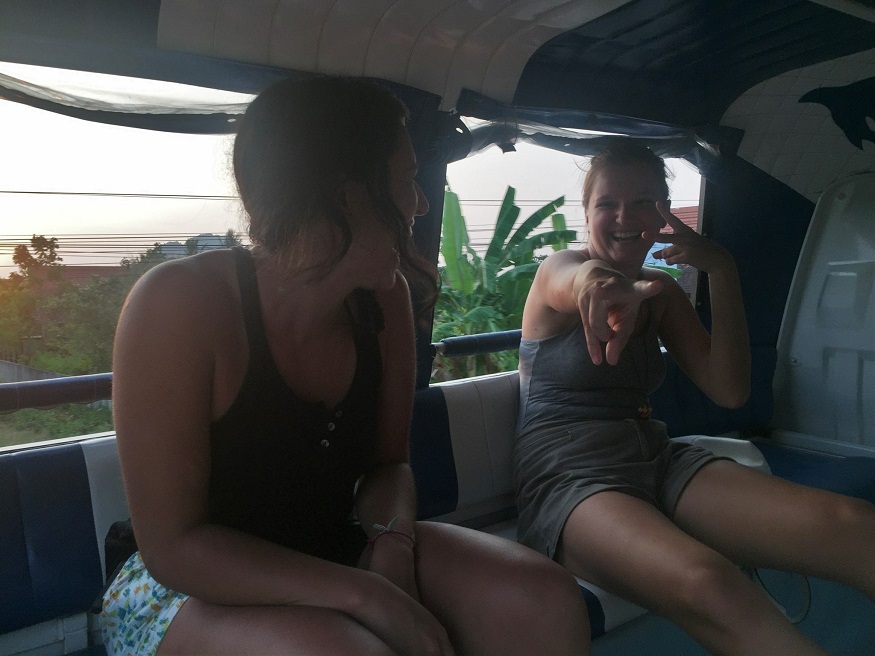 Being silly in Thailand with my Mexican friend

After a month of working, it was time to explore other places and stay as a guest in many (so many) hostels. Between travelling I also worked in different parts of Southeast Asia, as an English teacher and in a movie theatre. After a while I had realised that the hostel crowd is way more diverse than it might seem from the outside. Yeah, there are lots of young, chilled backpackers from the UK and Australia, but there are also all types of people from all types of places, and that diversity is what makes it so interesting.

I won’t lie, if you stay in hostels as much as I did, you will encounter some annoying, impolite and close-minded people. But they are for sure the minority among the hostel crowd. Staying in a hostel and enjoying it means that you can live in a small diverse society without going crazy – not everyone can do it, but for some of us there’s no better way of life.

With that atmosphere it really is easy to meet people. As easy as approaching someone and saying “hi, where are you from?” Making friends in a hostel is effortless. When you connect with someone you can start to build friendships; maybe brief ones, maybe long ones. I met many people that were travelling together and had met days, weeks or months before.

With the girls I worked with in the movie theatre, I explored the Cambodian seaside and mountains. With a girl the three of us met in a hostel, we had a delicious Cambodian meal while watching a huge storm form in the skies. Last week, one of these girls I worked with in Cambodia told me she’s coming to London, so she’ll stay two nights at my flat. 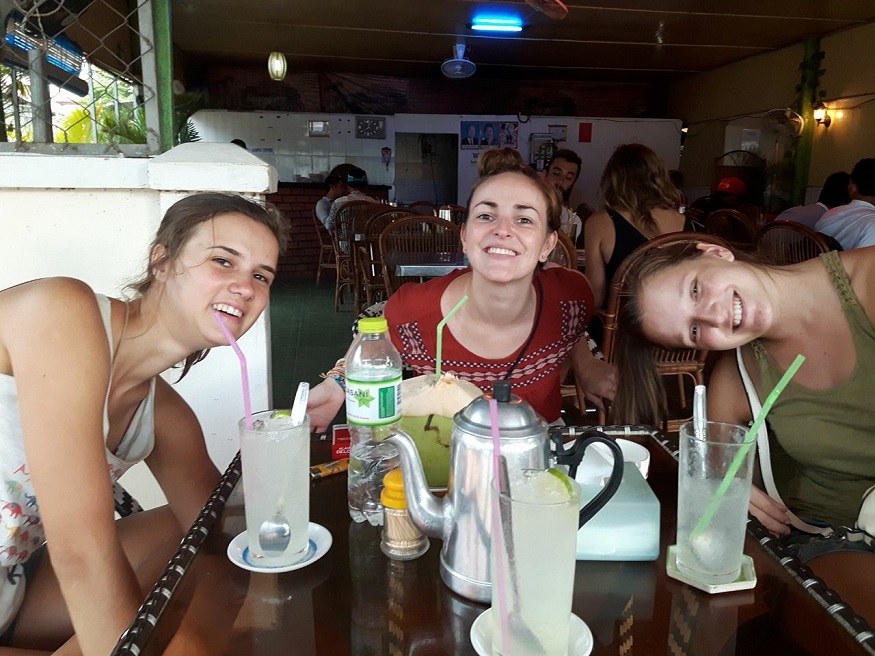 But, again, I must be honest. After the first three months, I was a bit tired of hearing “hi, where are you from?” and then having the same “where have you been, where are you going next, which place did you like the most” conversation. So, in order to not stop talking to people, I started to propose weird topics right from the beginning and… it worked!

Some days I also wanted to be completely alone and not talk to anyone, and that also worked. Travelling long-term is about learning how to make your mood, the place, the atmosphere and the people around you combine in the best way possible.

Tips for making friends in hostels: 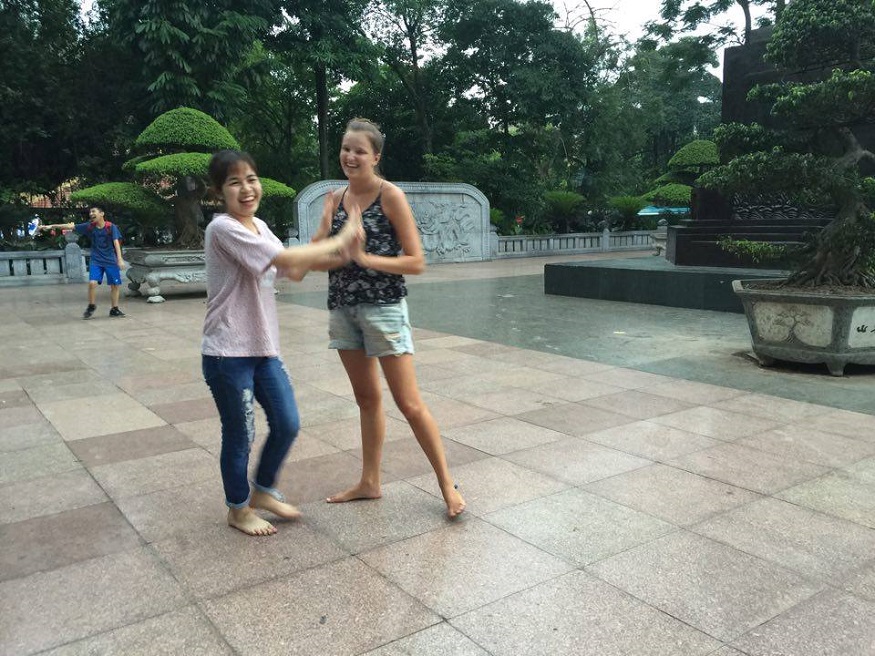 Life after your first big trip

I miss those four months of 2016 almost every day since I boarded the plane back home, and I can’t stay a day without my next trip being planned. I always loved travelling, but after that trip I realised travelling needed to be a huge part of my life, not just a hobby.

I write this article in 2018, from London. I’m here because I started working at Hostelworld after applying for an internship I never thought I would be picked for. In my interview, my travelling experiences, my time working in a hostel and my knowledge about Southeast Asia were all points of conversation. If it wasn’t for my first big travel experience, for pausing regular education to pursue other ambitions, for working in a place I didn’t really understand, I don’t think I would be here today. 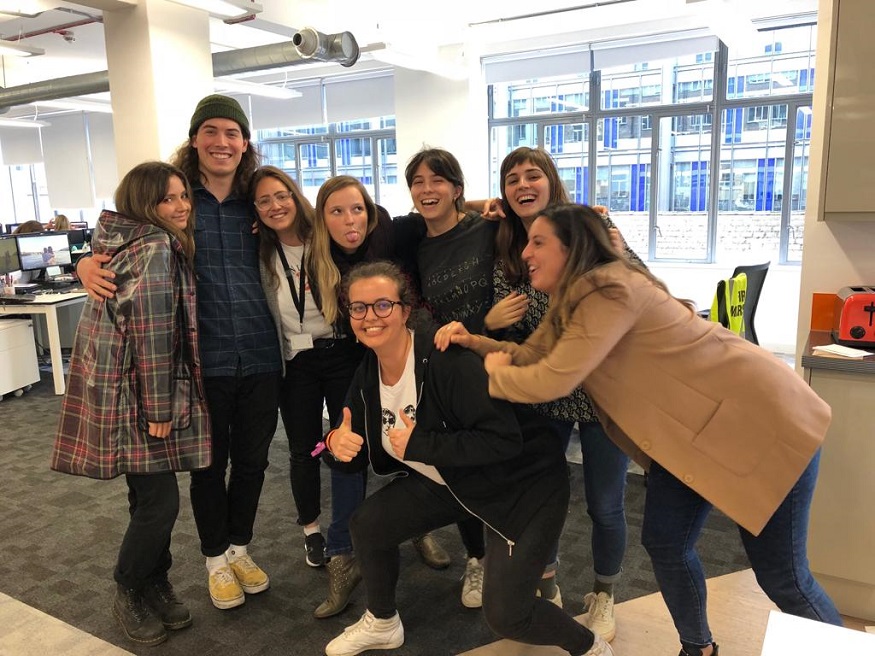 Some of the Hostelworld crew – 7 nationalities in one photo!

Since being in London I’ve already met up with three people I met in Asia. One of them lives here and I see her often. We met in Hanoi at the hostel Vietnam Backpackers more than two years ago. I heard her and a friend speaking Spanish (a language I understand a bit) and was interested in where they were from. So I said hi, learned they were from Spain and Finland and was invited to have dinner with them.

Overlooking a typically busy Hanoian crossing and drinking cheap Vietnamese beer, we talked about random things. We added each other on Instagram and I thought it was going to be ‘just another travel friendship’. Little did I know that Natalie, the ‘Finnish’ girl (she’s walked such an interesting path, living everywhere and speaking so many languages, that only saying she’s Finnish is not totally accurate) would move to London at almost the same time as I did and would live just a quick bus ride from my flat. 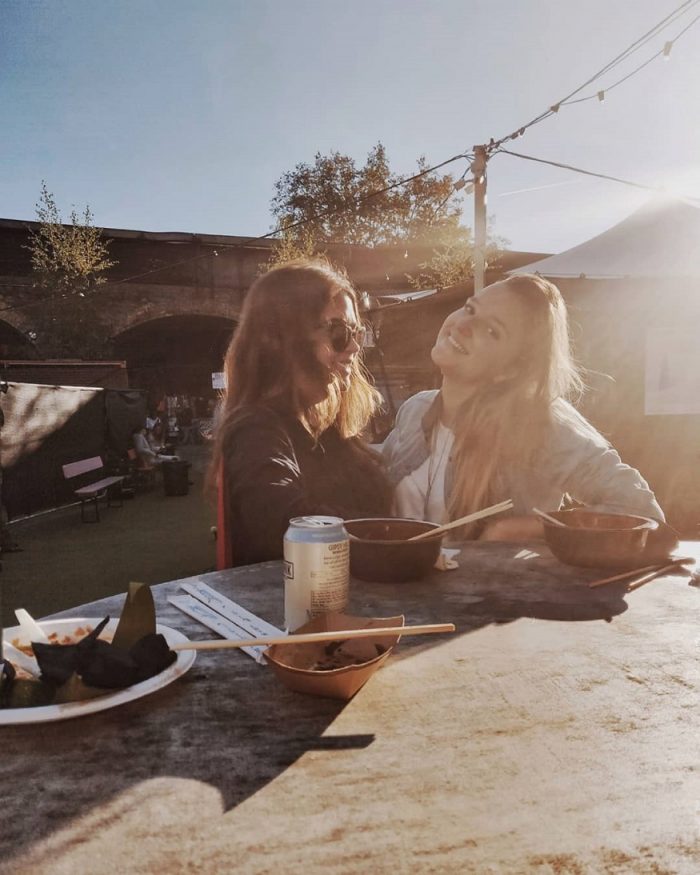 Me and Natalie in London

Two months ago, I went to Budapest and had the pleasure of staying in Hostel One Budapest, a very social hostel that organises family-style free dinners every night. In my room, after two nights staying there, two friendly girls checked in. I asked if they were joining dinner and encouraged them to do so. We started talking and I learned that they were Canadian and Scottish and that they were also living in London.

After that, we partied together two nights in a row and had some chilled talks while recovering from our hangovers. We added each other on social media and said goodbye with promises of a happy hour in London. Three weeks after I was back from Buda, I received an event request for a ‘Canadian Thanksgiving’ at their place. I went, met more people from all around the world, and since then saw all of them several other times, expanding my net of friends in London.

These London friendships from dorms in Hanoi and Budapest were very important in a pretty hard time, having just moved here. Being away from home can be lonely sometimes, and having people to talk to, or at least to keep your brain busy while playing games, is essential for a healthy mind. I also had the huge support of friends I made at my internship, so as cheesy as it sounds, I owe these friendships on some level to hostels and to Hostelworld. 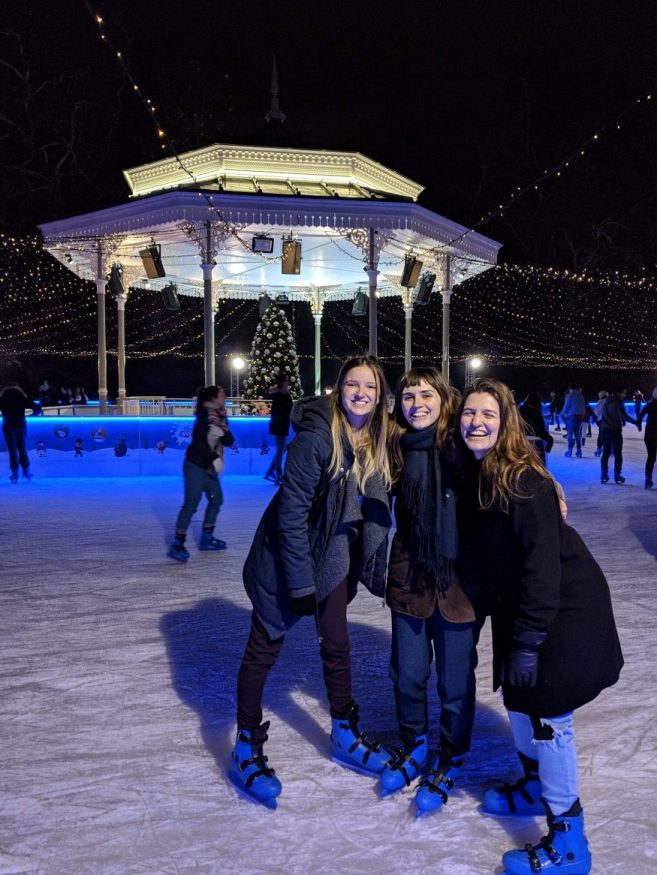 From other hostels around the world I have many people added on Instagram and Facebook. Some I still have contact with, some I don’t. But even the ones I don’t really talk to help me to understand the world better, showing me different lives in different countries and bringing my attention to international events. In a way, I’m building an international virtual network of people that might be forever virtual relationships, might be a beer when I go their countries, or might even be a deeper friendship in a city where I end up living. Who knows what the future holds?

Tips for keeping in touch with your travelling BFFs: 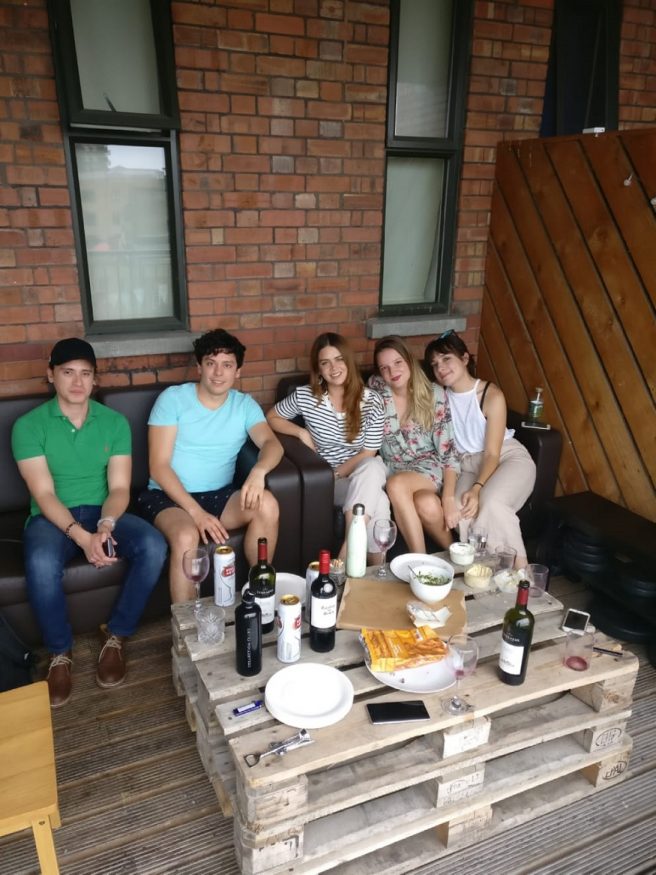 A gathering at Natalie’s house in London

I don’t think I will ever be completely ok with those ‘maybe forever’ goodbyes I say in hostels to people I had some kind of connection with. A part of me will always wish I could get to see that person more, have more laughs, learn more about their country, culture and way of living.

But I also learned that sometimes, luck might put this person in my life again, and from that a true friendship can be built. More than that though, I learned that sometimes these encounters are not about length, but about intensity. It’s about making people part of your travelling experience. It’s about opening yourself up to new people, hearing what they have to say, deciding if you want to hear more and whether you want to invite them for a beer and a laugh overlooking a typically busy Hanoian crossing. 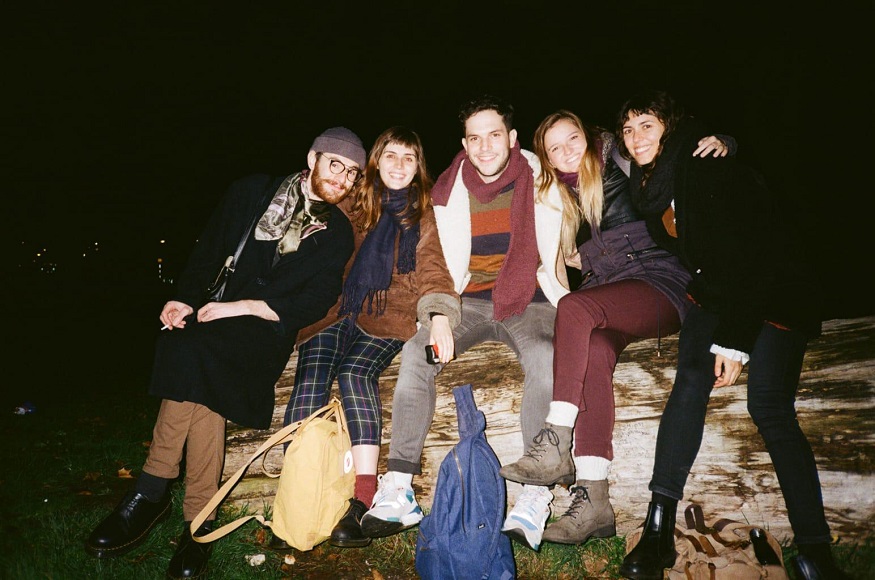 How to cope with travel fatigue