As a ‘carioca’ (kah-ree-o-kah, a person naturally born in the city of Rio de Janeiro) I’m deeply proud to have my home city hosting the Olympic Games this year. To make it easy, the Rio 2016 Organising Committee has separated the city into four zones where the competitions will take place: Barra, Copacabana, Maracanã and Deodoro. So, let’s take a spin and get to know a bit more about the Olympic Games host city… 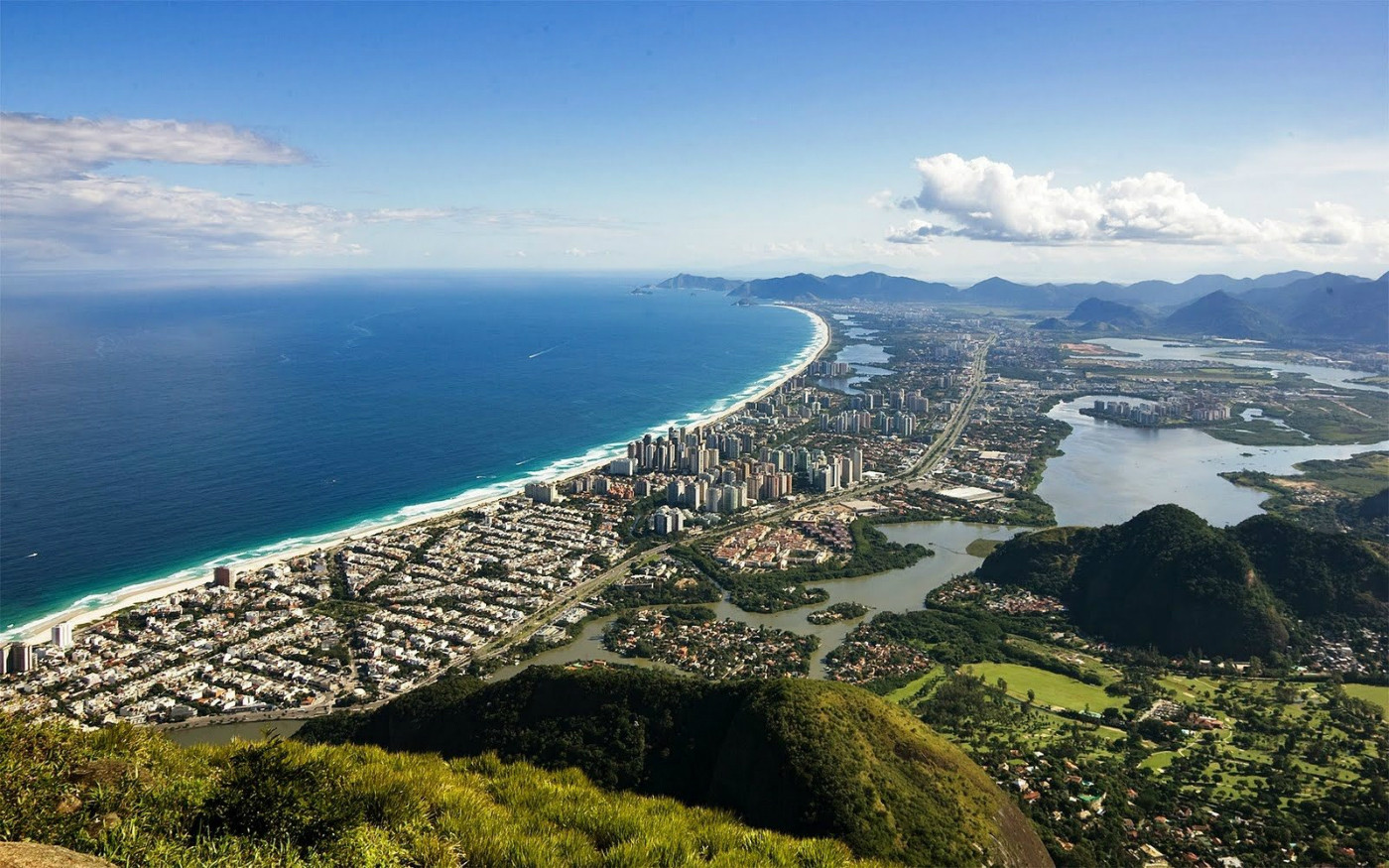 This was a main site during the Pan American Games in 2007, so many of its structures were renovated so for use in this year’s Olympic Games. It is a neighbourhood filled with condos, shopping malls, and very few sidewalks. Barra da Tijuca is also touched by the sea and it has many beautiful beaches that are way less crowded than the ones on the South side of the city like Recreio and Reserva beaches. Bosque da Barra is a municipal park, and a great option if you want some a space to explore the great outdoors. 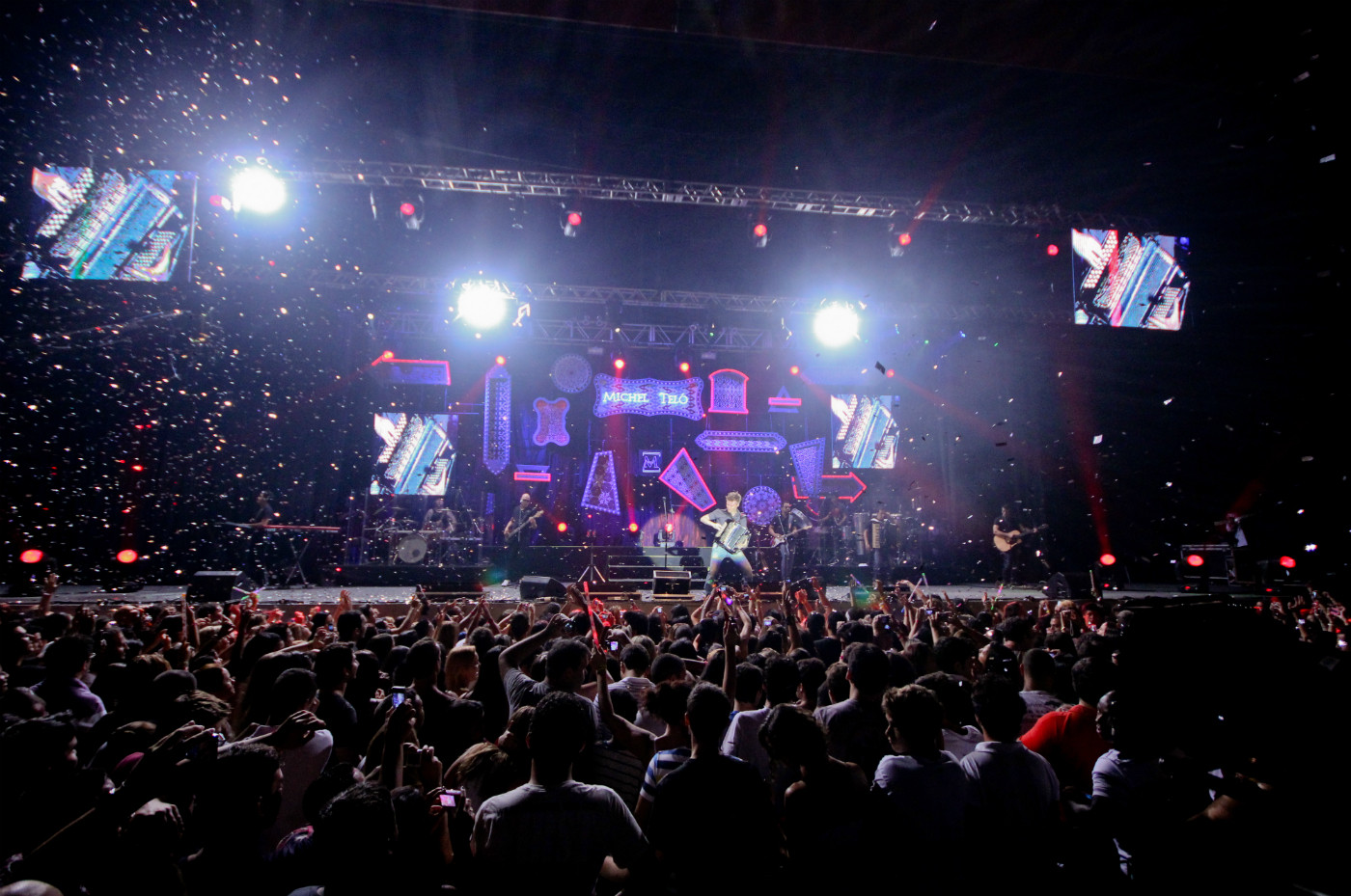 Barra Music is a well-known music venue in the area. Typical Brazilian music genres like funk, pagode and sertanejo are constantly filling air, and the VIP rooms are worth checking out. There are never-ending choices of places to eat. There are pizzerias, famous restaurants such as Bráz Pizzeria, Pobre Juan, and PF Chang’s, regular bars, and pubs like the ones at Rosas – a condo so big that there is a huge outdoor area with pubs and restaurants open to public.

Finally, the hostels! In Barra and Recreio zones you can find some great choices, such as Rio Surf’n’Stay and Hostel Bráz. Both offer free breakfast and extra services like airport transfer. 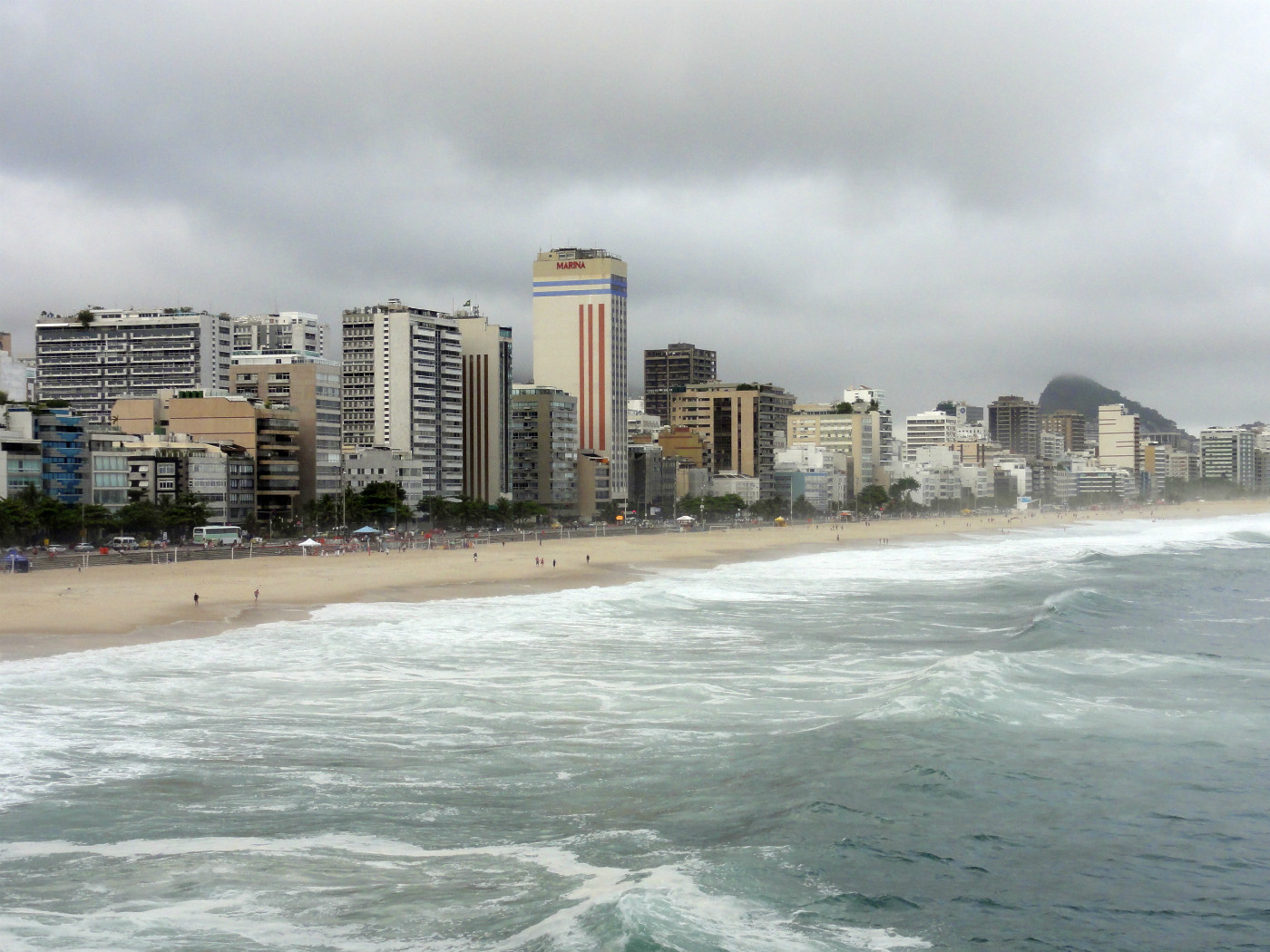 ‘Lagoa Rodrigo de Freitas’, the main lagoon in the city, will be the stage of some Olympic competitions, and is an attraction in itself. There you can find so many options to keep amused like shiatsu, bike rentals, roller skates and the well-known pedal boats. You can also just find a spot on the pier, sit down, and enjoy the view. It’s a feast for the eyes. Visiting the lagoon is the kind of activity that makes you proud of living in Rio, or maybe want to move here desperately. It is REALLY that good.

‘Forte de Copacabana’ (Copacabana Fort) is also included in this zone. There you can find a military museum, and the view will make you cry tears of joy! There are some cafés in the area, like Confeitaria Colombo (Columbus’ Bakery), a big name in Rio de Janeiro. Try to arrive at least an hour early to queue up for a table. It happens mostly on Sundays, since ‘Colombo’ is THE place to go for a delightful breakfast and insanely awesome view.

The fort is right next to Copacabana beach, where you can go stand-up paddle surfing. Have in mind that Copacabana is the most famous and popular beach in Rio.

Copacabana is a neighbourhood that’s bustling with possibilities, but to enjoy it as a true ‘carioca,’ you really have to hunt down a local bar. The more traditional ones tell part of the history of the city, combined with some ice-cold beer and snacks that will bring you to your knees. ‘Pavão Azul’ (The blue peacock) with its ‘pataniscas’ is the crown jewel of the area, and ‘Adega Pérola’ (The Pearl Cellar) has so many choices of finger food!

‘Parque do Flamengo’ (Flamengo Park) has one of the most beautiful views in the city, and it’s yet another option for outdoor activities like riding bikes, roller skating, and having picnics. Flamengo is a neighbourhood with some nice attractions, but the best parts are really the bars, especially ‘Belmonte’ at Flamengo beach.

Right next to Flamengo, you can also find the ‘Marina da Glória’ (Glory Harbour). A romantic setting where you can take your significant other to watch the boats and enjoy the quiet vibe… 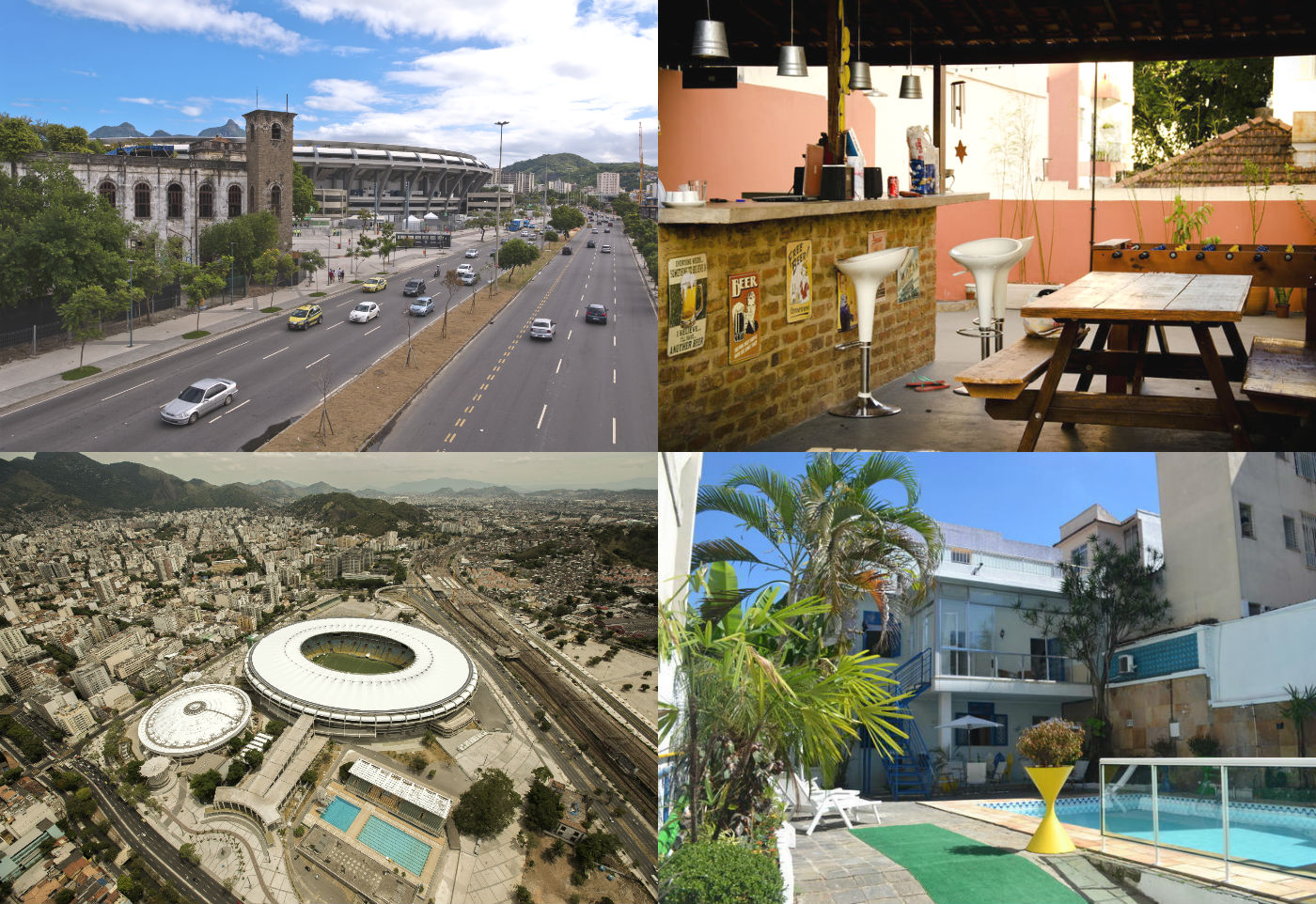 The whole neighbourhood orbits around the Maracana stadium and the university right next to it, UERJ (State University of Rio de Janeiro). In addition to the beautiful beaches, the host city also has a patchwork of different culture, people, and influences that all piece together.

For instance at Praça da Bandeira (Flag Square), which is really close to Maracanã, there’s one of the best bars in town called ‘Aconchego Carioca’ (‘Carioca Coziness’). There you can find the original feijoada dumpling that has inspired so many others around.

Also in this zone you will find ‘Quadra da Mangueira’ (Mangueira’s Court). Mangueira means mango tree and it’s the name of a notable samba school in Rio, birthplace of many important characters in our music history, such as Cartola, a renowned samba composer. At the court there are shows and rehearsals displaying just a tiny bit of what they have on show during carnival.

Not too far away, there’s CADEG in a neighbourhood named Benfica. CADEG is basically a flower market, but there you can find a few restaurants where you must ask for a ‘costela no bafo’ (steamed ribs). You’re not going to find there any kind of light food, like green salads and such. It’s all heavy stuff!

This zone houses the world’s largest urban forest, Floresta da Tijuca (Tijuca forest). There you will find waterfalls, barbecue pits and hiking paths. For those who want to get to know the ‘nature’ side of a city like Rio, it’s a really striking and inspiring contrast. A breathing moment in the midst of the big city chaos.

There are some great hostel options like ‘Kaza Rio’ that offers welcome drinks, and free movie with popcorn on Mondays. There’s also Maraca Hostel, with its refreshing swimming pool.

Ok, people. This is a place for those who would like to leave behind any prejudice behind and throw themselves into a not-so-popular part of Rio de Janeiro. Deodoro zone is located in a neighbourhood of the same name. Besides the competition areas, you will find houses, people and military housing. Close to Deodoro, you’ll find Marechal Hermes, a neighbourhood that has once been called “the suburban Lapa” and it has been a big hit with visitors since the 2007 Pan Am Games.

While there, you can visit the street market next to the train station, where you can find anything. A generous portion of the city’s famous chips, bacon, many types of cheese, and various side dishes have put this place on the map.

This region is connected by a railway system, and therefore it’s by riding on the trains that you get to know all this ‘carioca’ bohemian lifestyle. Leave behind the run-of-the-mill tours; it’s totally worth it.

It’s easy to come to Rio and visit only the central and South sides of the city. You get to see all those amazing landscapes and all those clichés, although that’s not necessarily a bad thing.. But if you’re looking forward to seeing the city under a different light, give this itinerary a chance. Take a look at the city just like the Organising Committee did and get truly spellbound by the host city of the 2016 Olympic Games.

Carla is a journalist, “carioca” (from Rio), but really wanted to be “paulista” (from São Paulo). She believes that living your whole life at the same place is a waste of time and, despite being an endless urban lover, she feels her heart beat faster every time she passes by Botafogo Bay.

Where to stay in Lisbon: a local’s guide to the coolest neighbourhoods

Where to stay in Berlin: your neighbourhood bible

Where to stay in Lisbon: a local’s guide to the coolest neighbourhoods

Where to stay in Berlin: your neighbourhood bible