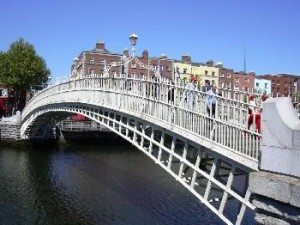 Dublin boasts one of the liveliest social scenes in Europe. Over at our Hostelworld.com Facebook page, we asked you about your favourite bars in Dublin with the answers featured here. Here’s what you told us…

Located right in the centre of Dublin’s popular Temple Bar area, the Auld Dubliner aims to treat visitors to a traditional Irish pub experience. This includes a selection of Irish dishes, along with, of course, plenty of drinks.

Porterhouse is Very touristy but always good craic! And that guy who plays the guitar every night is amazing!

Part of a chain of bars across the city, the Porterhouse Temple Bar serves up a great selection of exclusive beers all brewed at the Porterhouse’s own brewery. You’ll hear live music here almost night which you can listen to for free as the bar doesn’t impose a cover charge.

This popular haunt is well-loved by Dublin’s students along with plenty of visitors to the city who head here to hang out in a laid back atmosphere. A wide variety of tunes compliment the cool vibe, plus there’s a great selection of drinks on offer too.

Is impossible to choose only one!!!Dublin is my favourite place to go out. Mezz is good because you can listen to live music.

Attracting a good mix of locals and visitors, the Mezz is a great spot for live music in Dublin. There’s no cover charge and a wide variety of drinks are available from pints to spirits and more.

The Bleeding Horse is by far the best

A historic pub, the Bleeding Horse was first established back in the 17th century and has been a favourite with some of Ireland’s great literary figures including James Joyce. Today the pub offers a wide variety of drinks, a live DJ from Thursday to Saturday nights and also shows sporting events on its big screen TVs.

The Bank on College Green is the perfect place for a relaxing pint. The former bank setting, complete with old vaults, stained-glass ceiling and other paraphernalia lends a marvellous atmosphere…..and there are good lunch and dinner menus too!

Open since 2003, this award-winning bar is located inside a beautiful Victorian building. This setting provides a classy ambiance that’s popular with many of Dublin’s professionals who come here to sample the food and have few drinks.

The George! its FABULOUS!

The George is Dublin’s longest running gay club and was first opened in 1985. Today it’s frequented by a mix of gay and straight people, while live entertainment at the bar includes drag shows and bingo.

The Stag’s Head is recommended by: Suzanne Nichols and Aymeric Duchemin

This long-running bar which has been an important part of Dublin’s social scene since the 1870s was a favourite with famous Irish writer James Joyce. Traditionally decorated inside, the Stag’s Head also hosts live traditional music on Thursday to Sunday nights. As well as Guinness, you’ll also find plenty of other Irish beers and stouts on offer here.

The Bull & Castle opposite Christchurch Cathedral has a fantastic beerhall atmosphere and some fantastic independent Irish and central European brews. Not to mention dangerous, litre-sized glasses.

Advertised as a gastro pub and beer hall, Bull & Castle is spread out over two levels. The gastro pub on the ground floor serves up steaks, seafood, pies and more, alongside a selection of beers, wines and whiskeys. Upstairs in the beer hall things can get a bit rowdier with a late bar, drinks specials and more.

For my money, my favourite pub in Dublin is the Czech Inn on Parliament St In Temple Bar. Great beers, great atmosphere and the best service in Dublin. It’s a real find and very different to the majority of pubs in the city.

Czech Inn opened in Dublin in 2006 and it serves up a great variety of Czech beers, food and more. A selection of delicious and colourful cocktails are also available.

Without a doubt, O’Neill’s!

When first arriving in Dublin, not knowing the city and wanting some authentic Irish fair….we went to Fitzgerald’s and we were more than pleased with the food and our first taste of Irish entertainment. I would give them 9 out of 10 stars.