For some, Amsterdam may conjure up an image of rowdy stags, the Red Light District and stoned tourists but this city’s quirky culture goes way deeper. These days it’s all about the open-air clubs, secret coffee shops and slick hostels. We’ve combined our  team’s multiple adventures to the Dam into one golden “bucket list” of our tried and tested faves. Our mission? Avoid the tourist traps and keep it as local as possible!
Cycling life is a laidback affair in Amsterdam (compared to London that is!) and taking wrong turns is what it’s all about! The first thing you need to do is hire a bike from your hostel, ditch the map and surrender to getting lost. One afternoon we ended up on a waterway with vintage barges, a random motorcycle repair shop and a family of 8 whizzing past in a giant wheelbarrow. Just a standard Dutch family outing?! 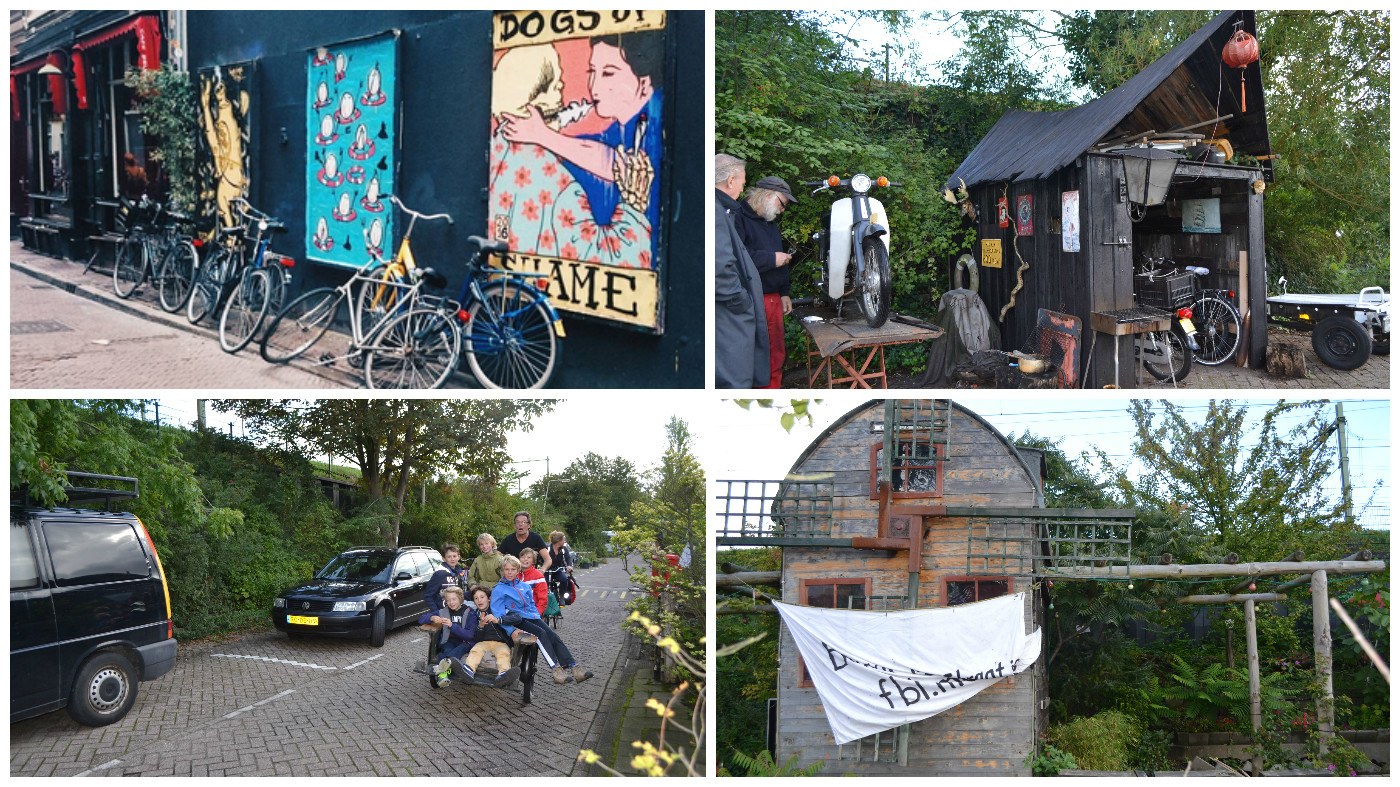 The Hostel Mamas
Taking hosteling to the next level are boutique hostels Ecomama and Cocomama. Ecomama is a leafy greenhouse with recycled Chesterfield sofas and a large communal area + SWINGS! Day chilling is done here or at Filter, the artsy cafe at the front of the hostel where you can chow down on homemade healthy treats. Option 2? Take an afternoon kip in the tipi – yeah, that’s right, the tipi IN the hostel! The “Eco” in the Mama means that the hostel’s green credentials are impressive, and they donate €1 to charity for every night you sleep ? 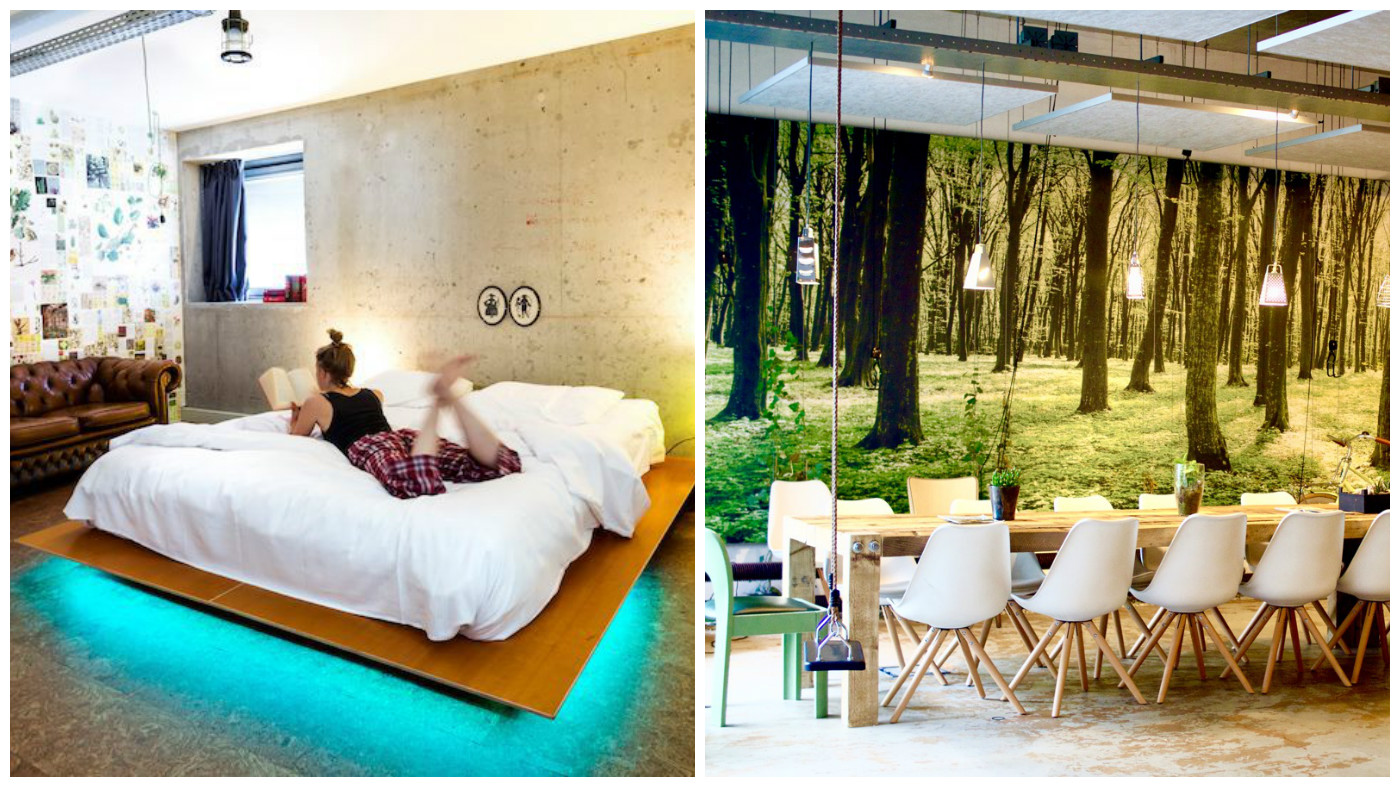 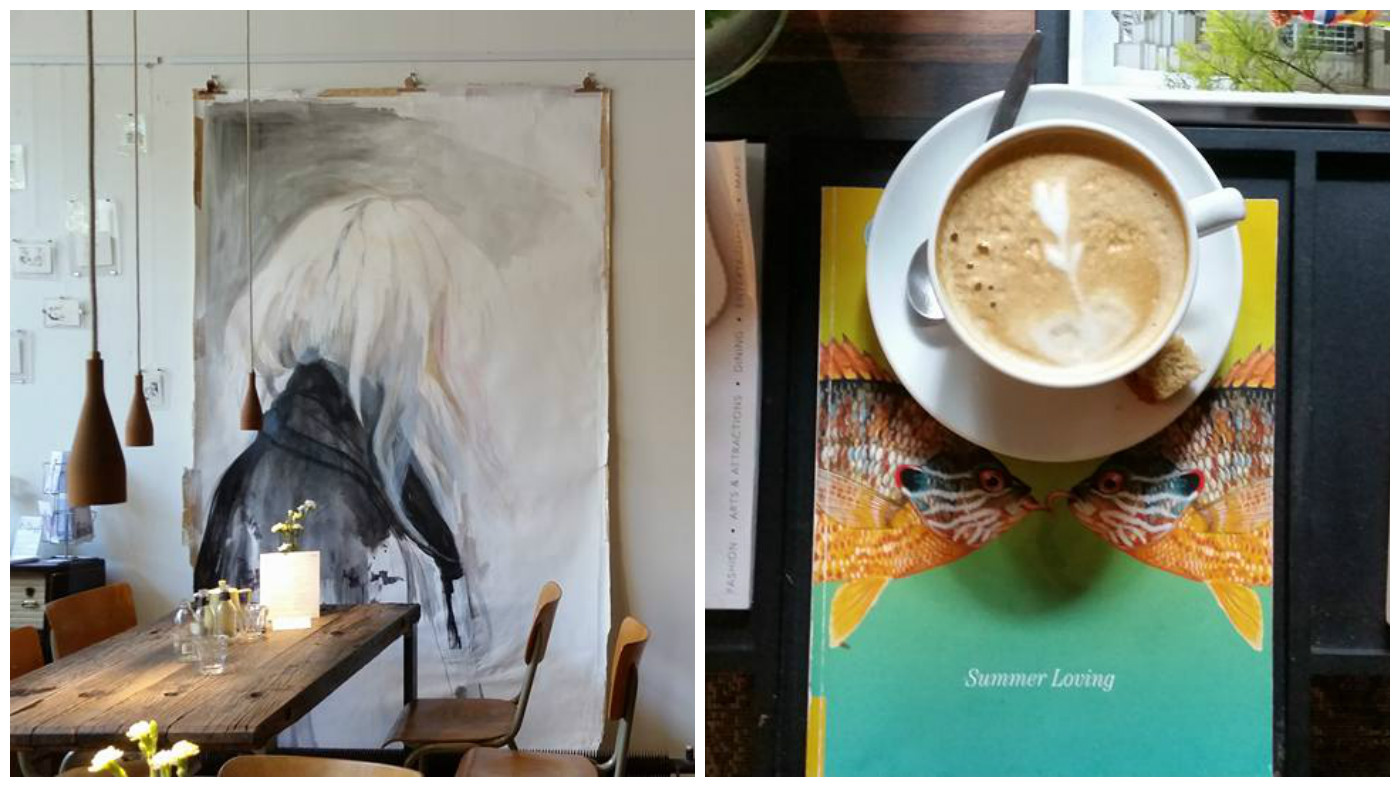 Cocomama is Ecomama’s sultry sister. Set in a former brothel, there’s a hint of old school glamour with chandeliers hanging from high ceilings and a spiral staircase snaking through the tall building. Rooms range from 6 bed dorms to double en-suites, all with an individual themes from ‘Van Gogh’ to ‘Cow & Milk’! Downstairs you’ll find a kitsch garden and kitchen area where the hostel hosts cosy film nights and weekly ‘Tight Ass Tuesday’ dinners for €3. And a home wouldn’t be complete without a purring (and very cuddly) hostel cat named Joop, now would it?! 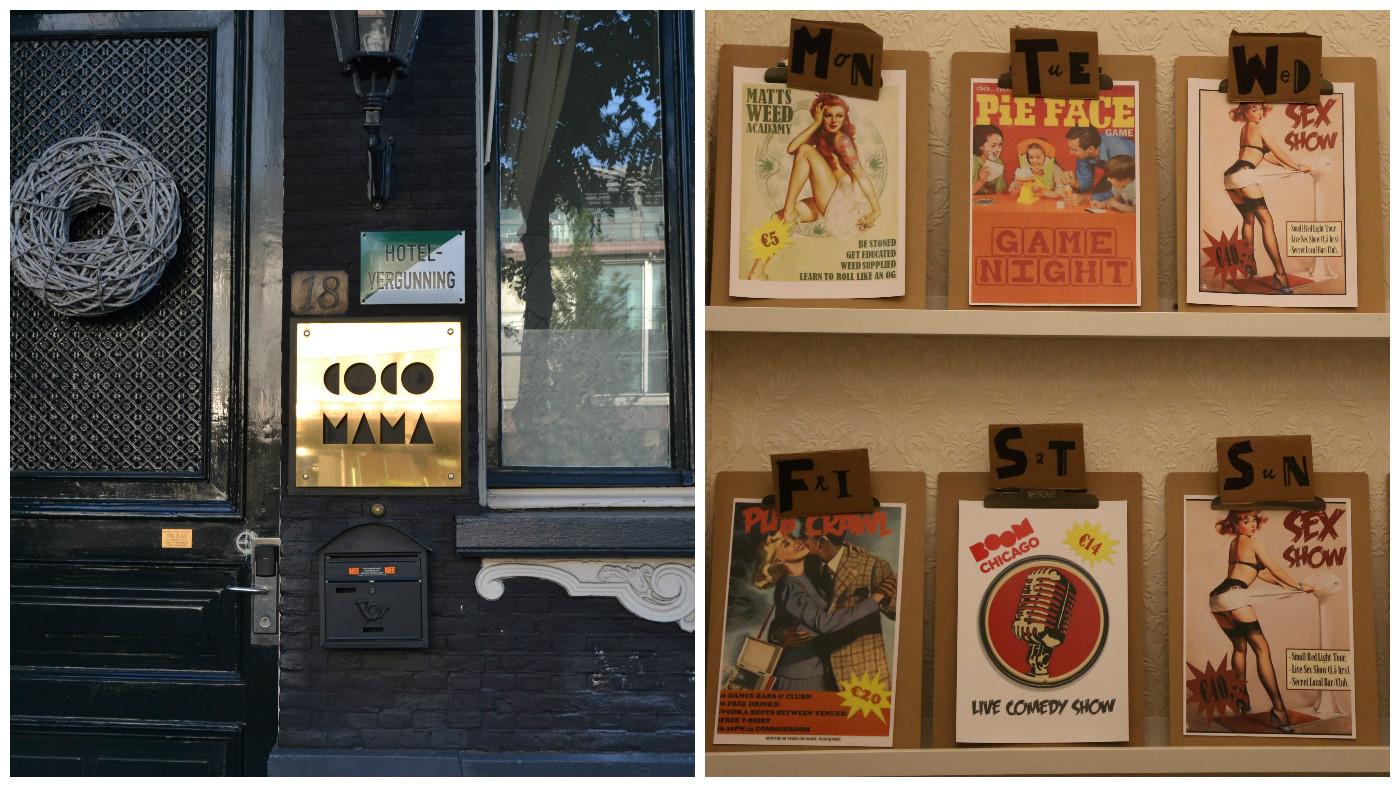 Escape to the canals
If you want a bar far from the madding tourist crowd, head 5 minutes east of Central Station to Hannekes Boom  (Tree House in Dutch). The locals travel here by boat to listen to live ska, funk, jazz and soul and dance ‘til 3am. It may look like a shack from afar, but inside you’ll be charmed by the art on the walls, velvet armchairs and an unpretentious vibes. The outdoor deck means it’s a great place for day chilling too. Sit on one of the painted benches and nurse your hangover with a coffee (or another beer?!) and a trance-inducing view of the Amsterdam skyline. Café De Ceuvel is another gem along the canal. It’s an ecological boat-café on the river made of recycled materials that serves organic food made with home grown produce from their greenhouse. Yes, a real one! 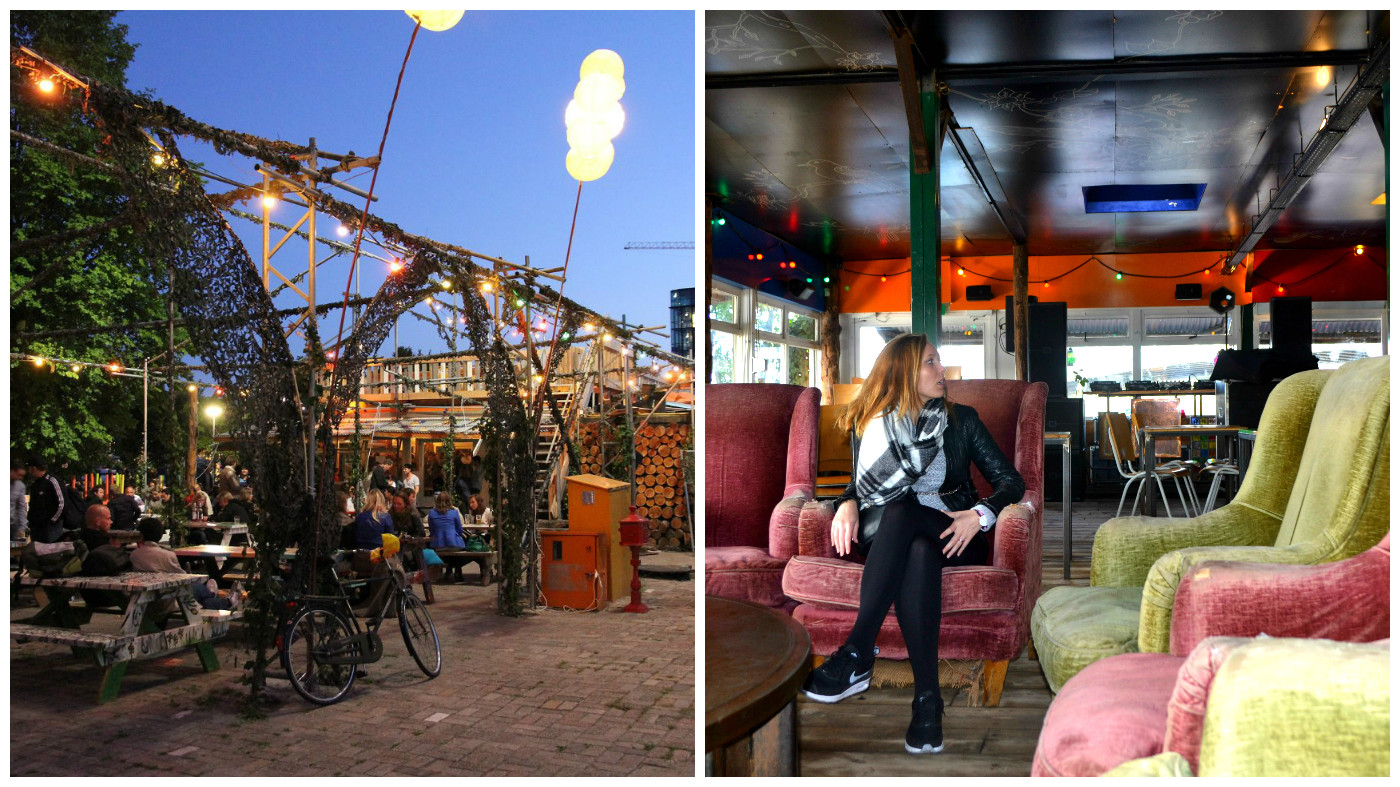 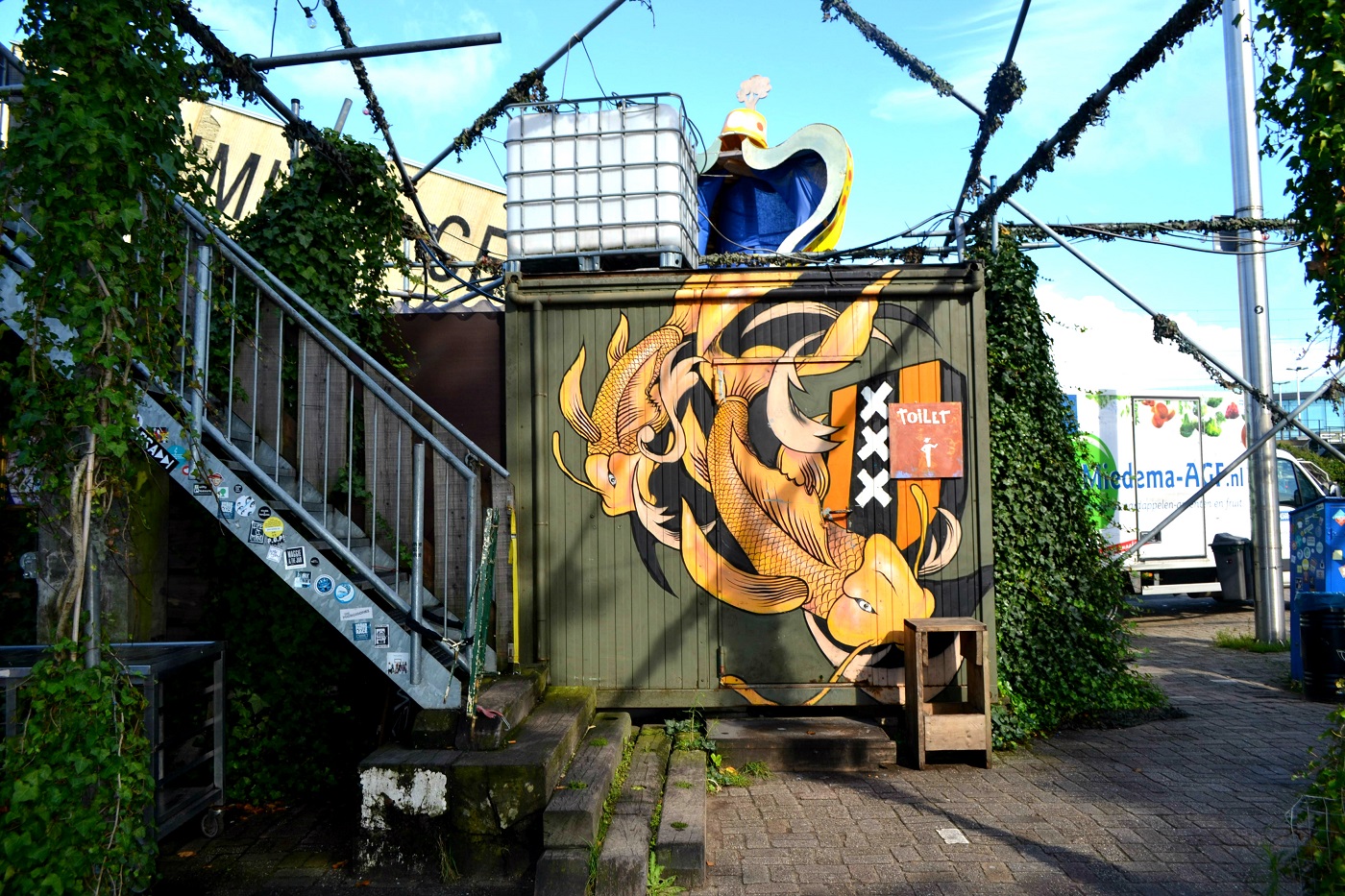 A Science Experiment
The Clink NOORD building was used as a testing lab in the 1920s, and it’s now one helluva hostel! The building itself is monumental, stylishly transformed into an open, modern space with the odd authentic feature such as the dazzling stained glass window on every stairwell. Best part is, it’s just 400 meters away from Amsterdam’s Central Station across the river, and surrounded by parkland in the happening Overhoeks districts.
The hostel has its own bespoke bar with regular DJs and performances, a library, a huge plant decorated atrium and a shiny self-catered kitchen area – ideal for rustling up a feast with your crew. The dorms sleep 4 – 16 people all with their own en-suites, and you even get an eye mask & mini shower accessories on your arrival. Small touches always win us over 😉 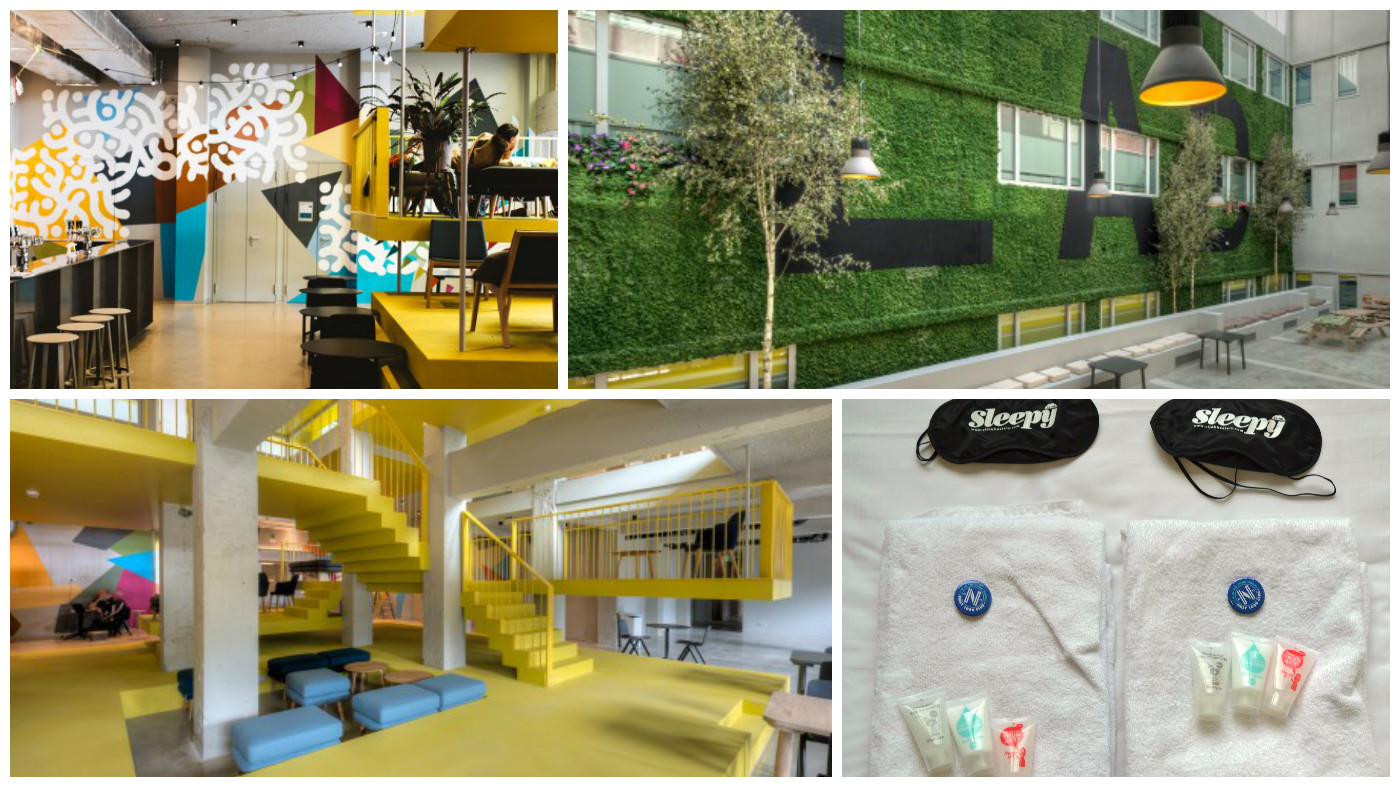 Party Al Fresco
Amsterdam Roest  is a city beach and “cultural sanctuary” near the harbour. The Roest “shed” holds markets, warehouse parties and festivals over the summer and attracts a cool crowd and arty types. It’s open all year round but pretty special in the warmer months, with extended opening hours so you can party from 11am – 3am. Why not sip on a Hawaiian punch on the “beach” and join in the Bikini party on the last Sunday of every month! Amster-where?! 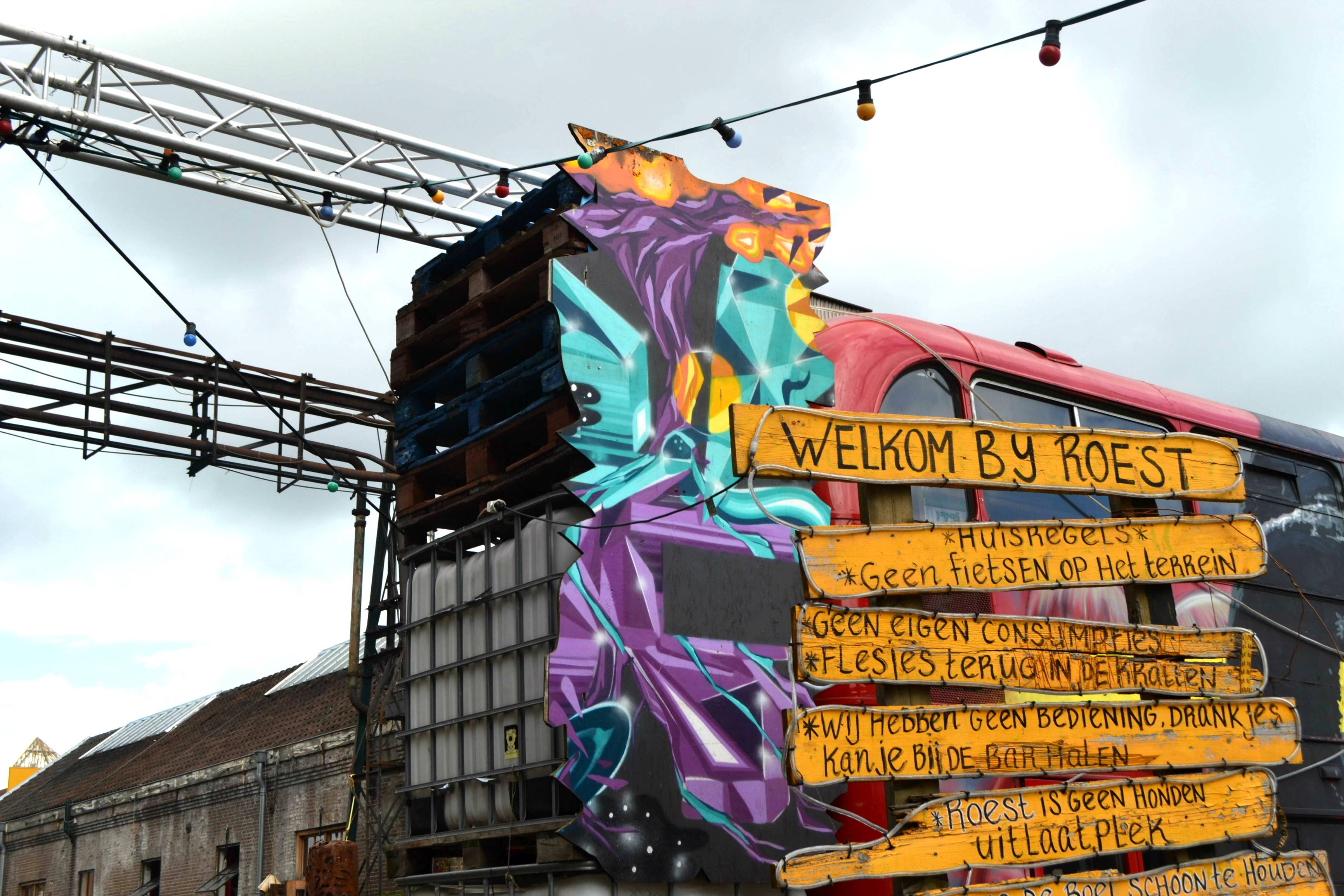 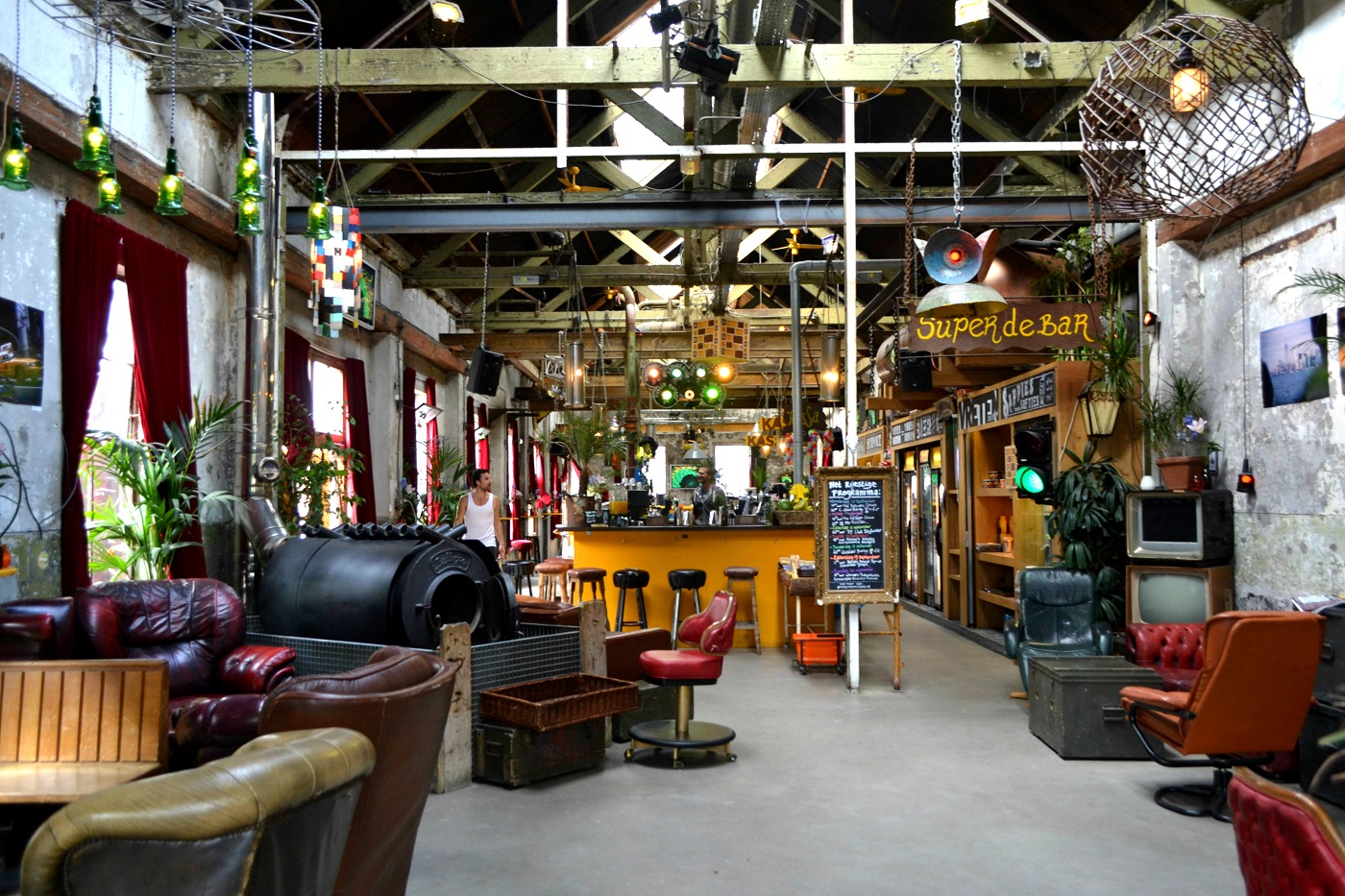 Vondlepark & Leidsplein Shenanigans
A rather ravishing park you must check out is Vondlepark, the city’s largest park and loved by Amsterdammers and dogs alike. Run, cycle or roller skate around the park’s luscious green grounds and lakes and marvel at the sculptures dotted around! There’s even an open air theatre that runs events from June to August.
THE place to stay for some Vondlepark action is Stayokay Amsterdam, a monumental chalet building overlooking the park. There’s no chance of feeling cramped as this is one of the largest hostels in Europe, with a whopping 536 beds divided over two, four, six and eight bedded rooms – all with a bathroom and free individual lockers. Mornings are taken care of with a highly-recommended FREE breakfast (see below).
Want to find somewhere on the same level as this? Take a look at our rundown of the best hostels in Amsterdam for more accommodation ideas.
After sundown, take a wonder next door to Leidseplein where you’ll find hipster bars and an outrageous range of dinner options, with everything from Argentinian to Indonesian on offer! 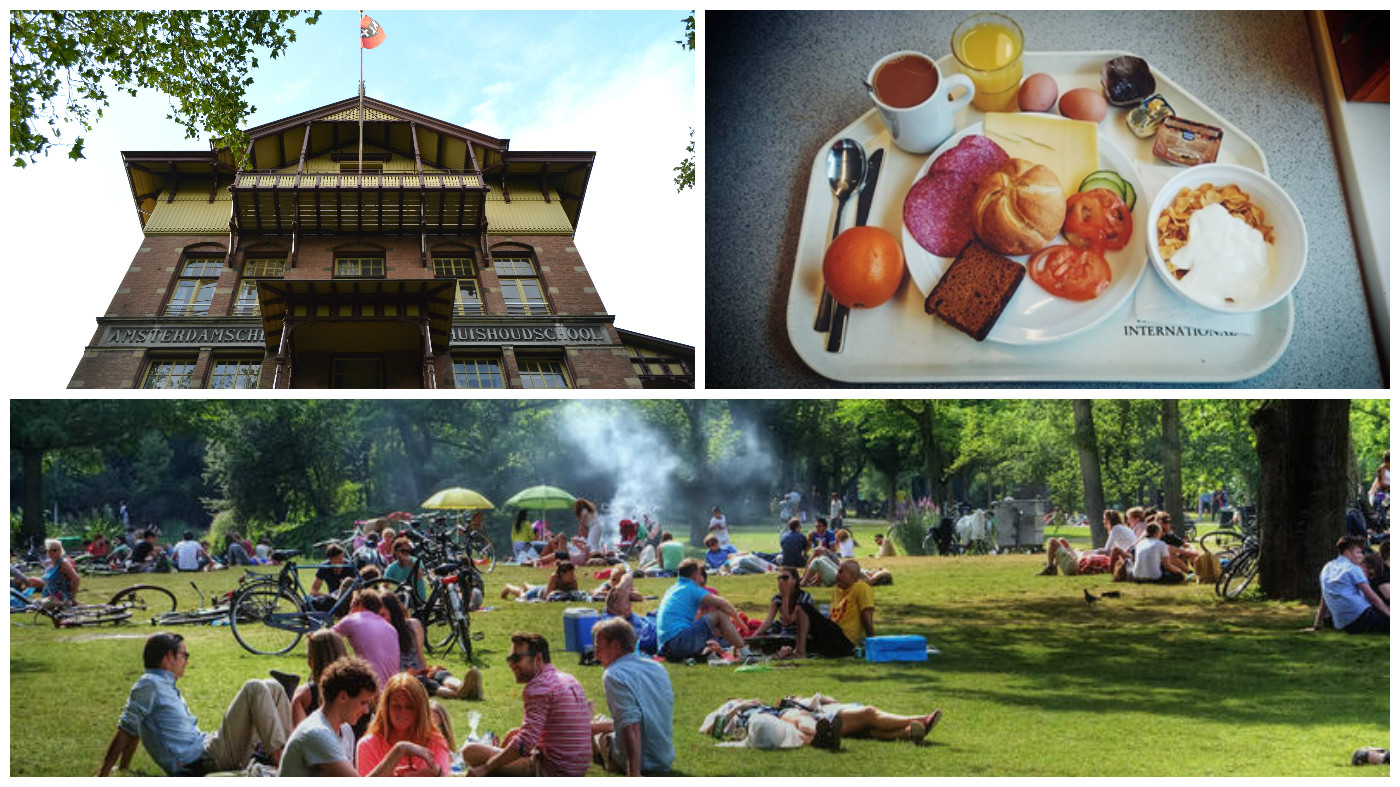 Coffee Shops
You can buy weed in coffee shops, but to save some cash, we recommend rolling and smoking in bars/cafes where they don’t sell it but they allow you to smoke it. If you want to keep the smoking “in house”, many hostels have dedicated smoking areas, such as The Flying Pig (below). Here they have a separate indoor smoking area with a “pillow stage”, “happy room” and free movies playing nightly – what more does one need?!
The Bulldog  was the first coffee shop in Amsterdam and it’s located in the very heart of the Red Light District – The perfect base for coffee shop > pub > club hopping! They have hostels, coffee shops and bars all over the city. If you’re after actual coffee, read about our 15 best coffee spots in Amsterdam here. 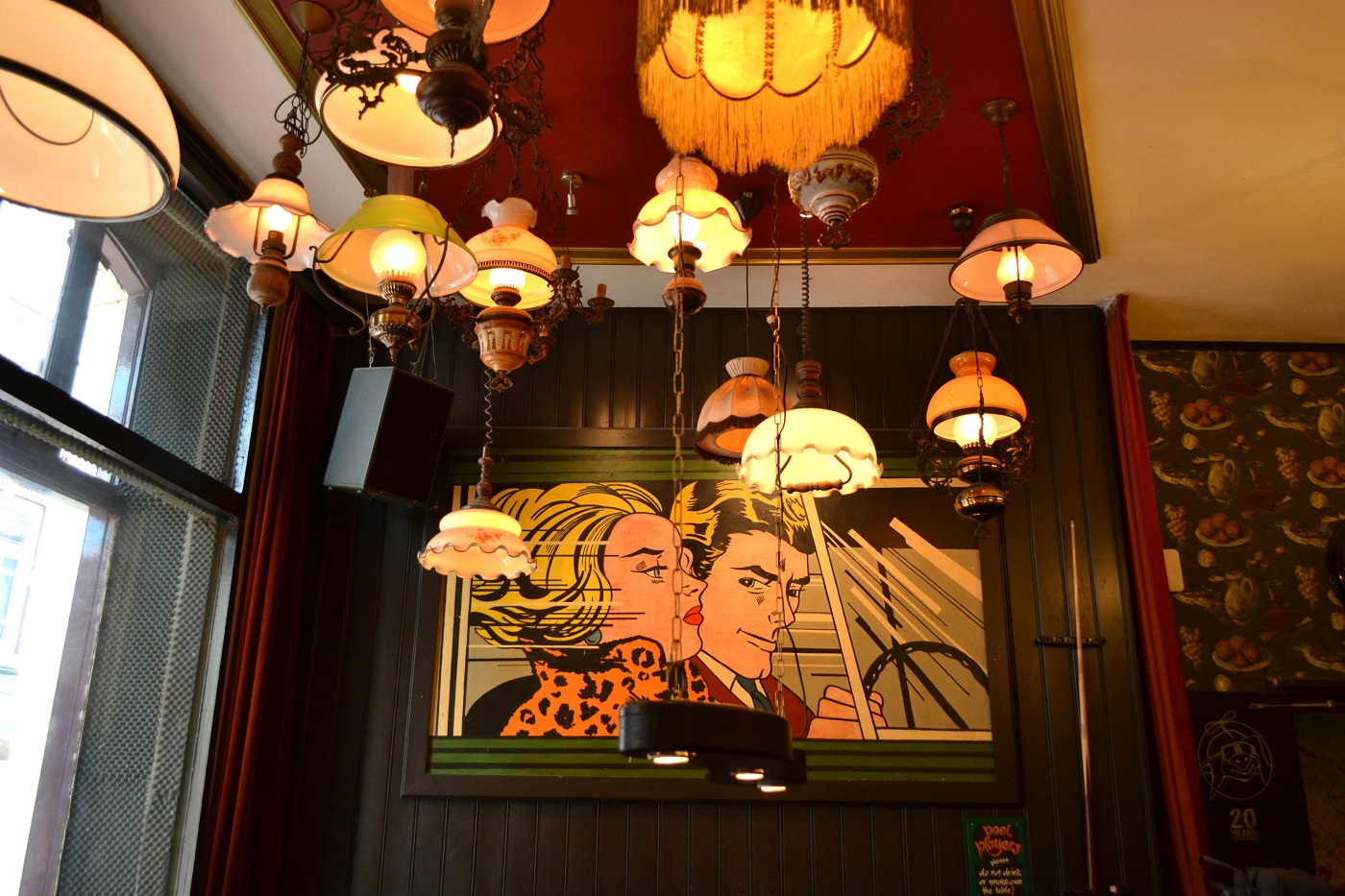 Generation Posh
Right next to Ooosterpark is the newest addition to the Generator Family – a gobsmacker of a hostel with MEGA luxury vibes. Generator Amsterdam is a 168-room former zoological building and serious hostel bait for city breakers. The lecture hall is now a chill out bar, the boiler room is a speakeasy and the roof is raised cafe overlooking the park. Artists and designers have run riot with the interiors – think Willy Wonka-esque glass elevators, neon signs and tropical wallpaper that will leave you cross eyed with joy.
Tip: Hire a Vanmoof bike from reception and take a 15 minute spin over to De Piip aka “The Latin Quarter”. Local artists and students make up a bohemian crowd, and lunch in Gerard Douplein square makes a fascinating place to people watch. Don’t forget to visit the country’s largest market, the Albert Cuyp with 300 stalls of everything from seafood to vintage clothes!