The minute you arrive in Italy, there’s already an expectation that you’ll be eating some out-of-this-world food. You’ve been craving to sit down at a rustic trattoria, order a bottle of wine and dig into an indulgent, homestyle meal that will make you love Italy even more. We’ve totally been there.

So we’re taking you to Florence as its local cooking is unique from the rest of the country. Tuscan cuisine has a reputation for being known as cucina povera or “poor kitchen” because, back in the day, Tuscan Nonnas utilized everything they had in the kitchen and on the farm to prepare meals. They literally used every single part of the animal as a possible ingredient. So that gives Tuscan food and the lovely food of Florence a very simple, yet hearty characteristic. Basically, it won’t leave you hungry.

So we made a guide for all the local and traditional Florentine foods you need to try. You won’t find any paninis or pizza on this list. Bring an open mind (and an empty stomach!) 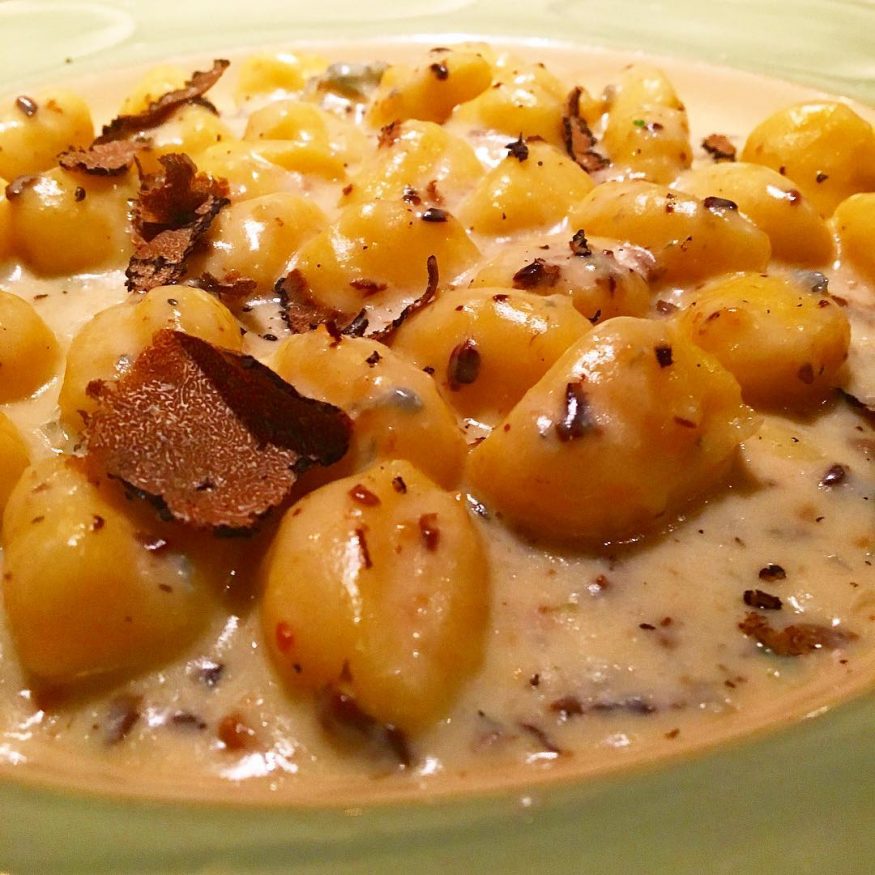 You can’t deny that truffle adds flavour to even the blandest of meals. It’s considered a valuable ingredient and it’s something you should try at least once in your life. There’s a little restaurant in Florence that has a menu dedicated to truffle. Yup, everyday they’re trufflin’ ! Order the Truffle Gnocchi and we guarantee you’ll be rolling out of this place on Cloud Nine. It’s served in a creamy sauce with Gorgonzola cheese and truffle seasoning. YUM.

Get it from: Trattoria Za’Za’ (It’s been serving Florentine food using their own style and recipes since 1977 — so you know it’s worth it!)

This one’s for the meat lovers out there. Also known as Florentine steak, this beast of a meal is unique to the great city of Firenze. According to tradition, this steak should come from a local Chianina cow, cooked for 3-4 minutes each side and served as a two-inch thick T-bone slab of meat.

This meal is meant to be SHARED. It’s expensive — so grab a few mates and split the cost of an order of Florence’s most notorious steak.

Get it from: Local trattorias. Try Buca Lapi or Trattoria Marione.

Not in the mood for meat? Try Zupa di Fagioli. It’s a really enjoyable, comforting bean soup made with cannellini beans, olive oil, tomatoes and herbs. Yeah, that might sound boring and simple, but don’t be fooled! It’s a Tuscan dish that will pleasantly surprise your taste buds (and maybe even serve as an easy recipe to make at home).

Get it from: Order as an appetizer at most restaurants in Florence. 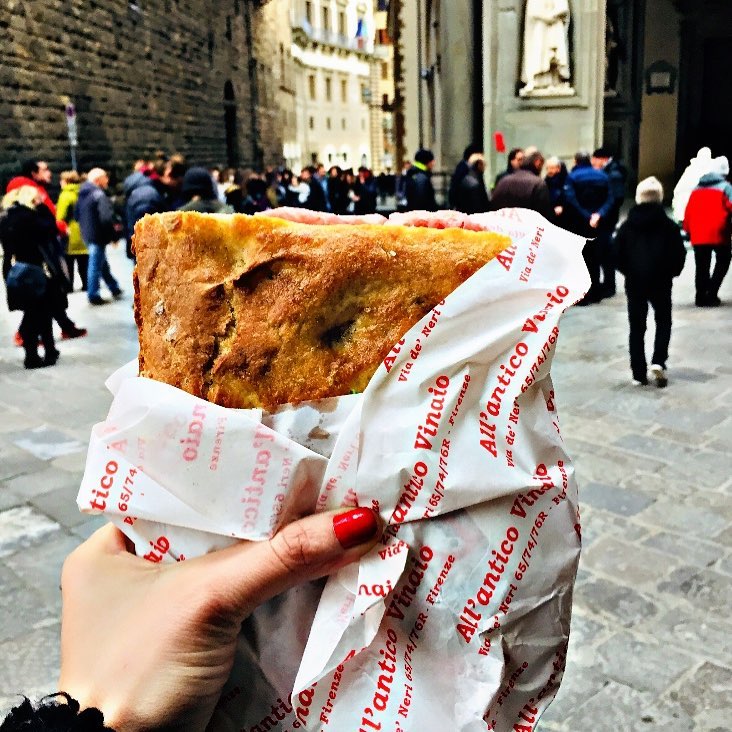 When in Florence, eat all the bread… especially Schiacciata (pronounced Skiah-CHA-tah!). It’s like Focaccia, BUT BETTER. Remember that the cuisine of Tuscany is known as “poor kitchen” and Florentine bread is proof of that. It’s made without salt (back in the day, Florentine citizens didn’t want to pay a salt tax #frugal), and that’s how Schiacciata was born. It comes out of the oven as a thin-crust bread, then it’s drizzled with olive oil and sprinkled with salt… and it won’t cost you a lot of dough!

Get it from: Bakeries in Florence. 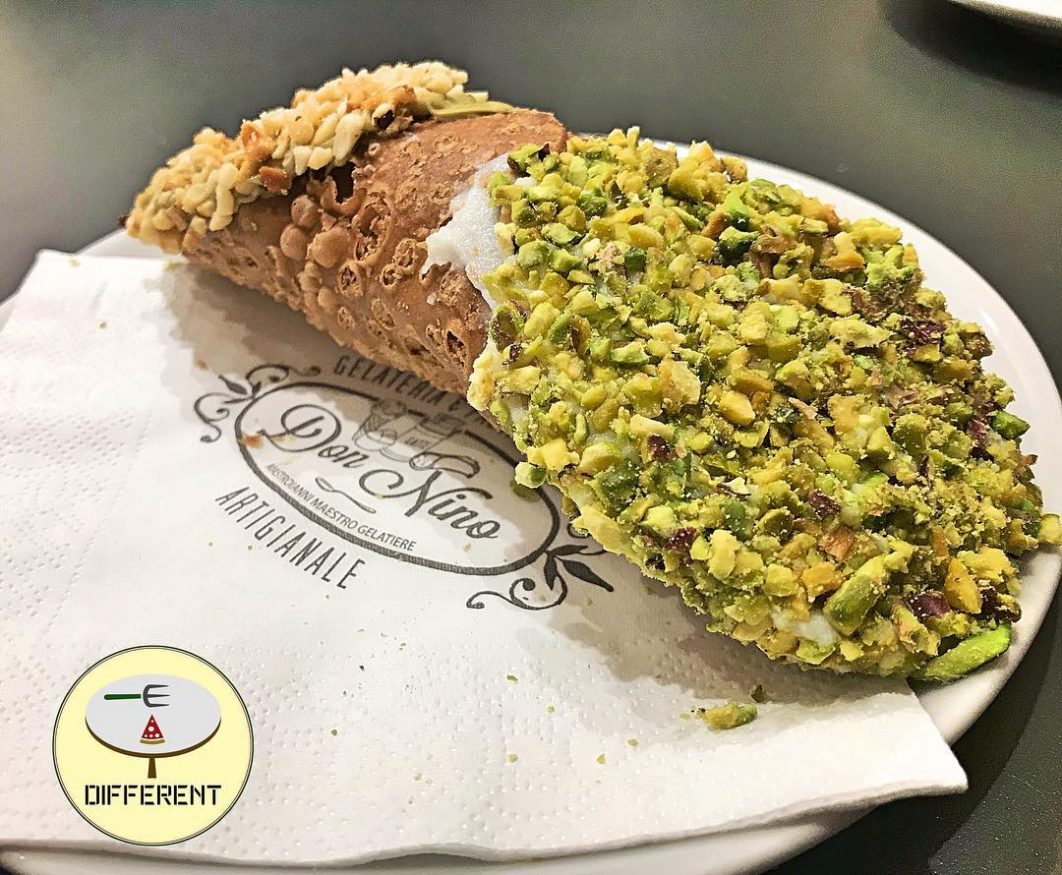 You can grab a cannoli from anywhere in Italy and be satisfied. But you’ll want to try the ones specifically from a cart in Piazza del Mercato Centrale (the Central Market). It serves the most drool-worthy cannolis you’ve ever tasted. They’re crunchy, creamy, sweet and you can choose your own toppings. Don’t leave Florence without stopping by this cart!

Get it from: Arà al Mercato Centrale.

Life tastes better with butter. Fact. You’re going to want to put pollo al burro, aka chicken with butter, at the top of your foodie bucket list. Picture thick chunks of tender chicken soaked in a steaming pot of butter and herbs *heavy breathing*. This is another one of those meals that you’ll want to share with friends. Order a bottle of vino and pollo al burro for the table. You won’t be disappointed!

Get it from: Trattoria Sostanza on Via del Porcellana. 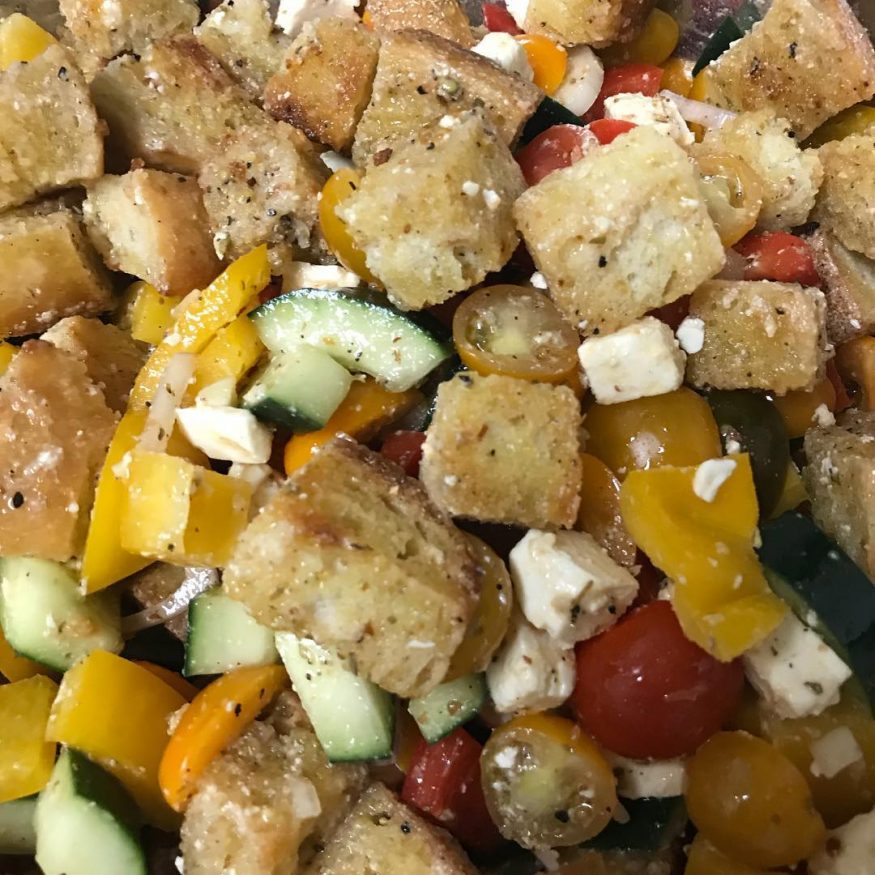 This is a local salad to Florence because of the bread. The recipe goes back to that “poor kitchen” trait of Tuscan cuisine because it’s made with leftover bread that’s soaked in water, squeezed dry and tossed in a bowl of diced tomato, onions, basil, olive oil and vinegar. It’s simple but tasty and a totally refreshing snack if you happen to be in the city during the hot months of summer.

Get it from: Most local trattorias. Pop into Trattoria Borgo Antico in Piazza Santo Spirito during lunch time.

Feeling adventurous? Order crostini di fegato as part of Italian aperitivo. It’s served with large croutons covered in a liver spread (that can be either veal, chicken, goose or duck) mixed with chopped anchovies, onions and capers. Sounds interesting, right? It may not be the first thing you’d try on a menu, but it is a traditional part of an aperitivo menu in Florence. So if you really want to embrace the food culture, give it a go. Wash it down with a glass of wine and tell us what you think!

Get it from: Most bars that offer aperitivo (you’ll see a chalkboard sign out front when it hits happy hour). 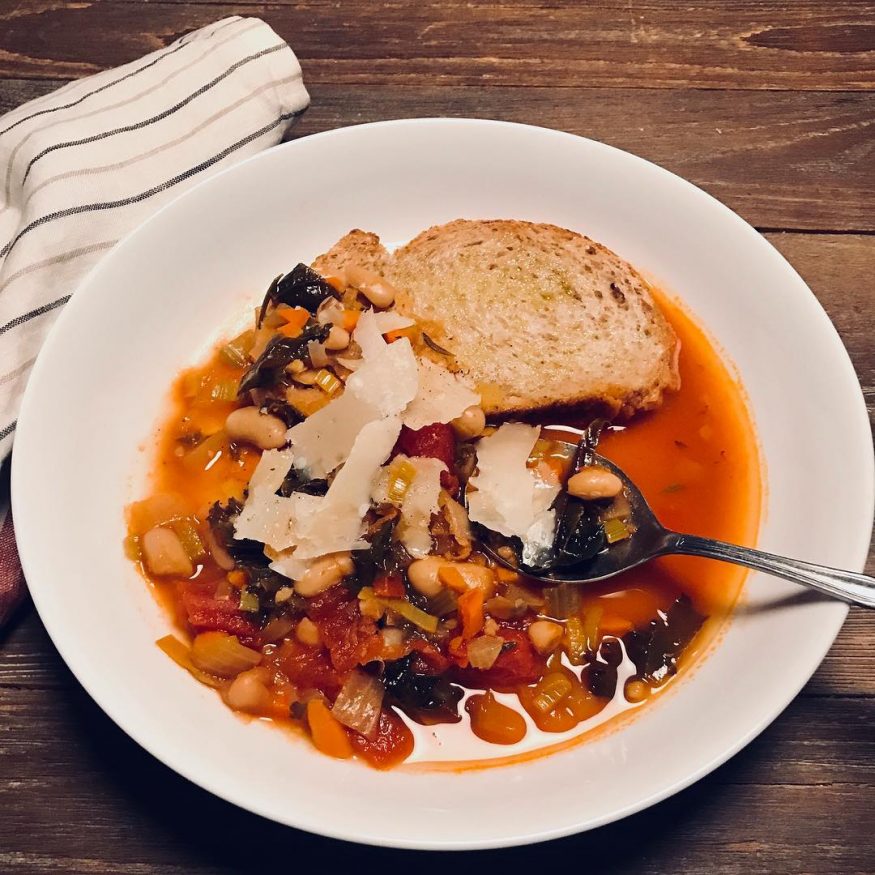 The name of this traditional Tuscan recipe literally means “reboiled”… which can be confusing. Consider this the winter version of panzanella. It’s a hearty soup that’s similar to minestrone but thicker. It’s made with stale bread (they really don’t like wasting bread), kale, cabbage, beans, carrots, tomatoes and other veggies. It’s incredibly flavourful and a major comfort food that you can’t miss out on in Florence.

Get it from: Most traditional Tuscan trattorias. We suggest da Nerbone in Mercato Centrale for a cozy, Ribollita experience.

Let’s talk about Florentine dessert. Schiacciata Fiorentina is a fluffy, sponge cake filled with a thin layer of whipped cream or vanilla pudding. It has a semi-sweet, lemon and vanilla flavour that will have you drooling at the smell of it. You’ll know you’ve found it if you see a Florentine lily or “giglio” (the city emblem) dusted in powdered sugar on top. Go ahead, take a bite of heaven and thank me later… with cake!

Typical price: €3 for a slice

Get it from: It’s really common to find it during Carnival period (February), but you can also grab a slice from most bakeries. 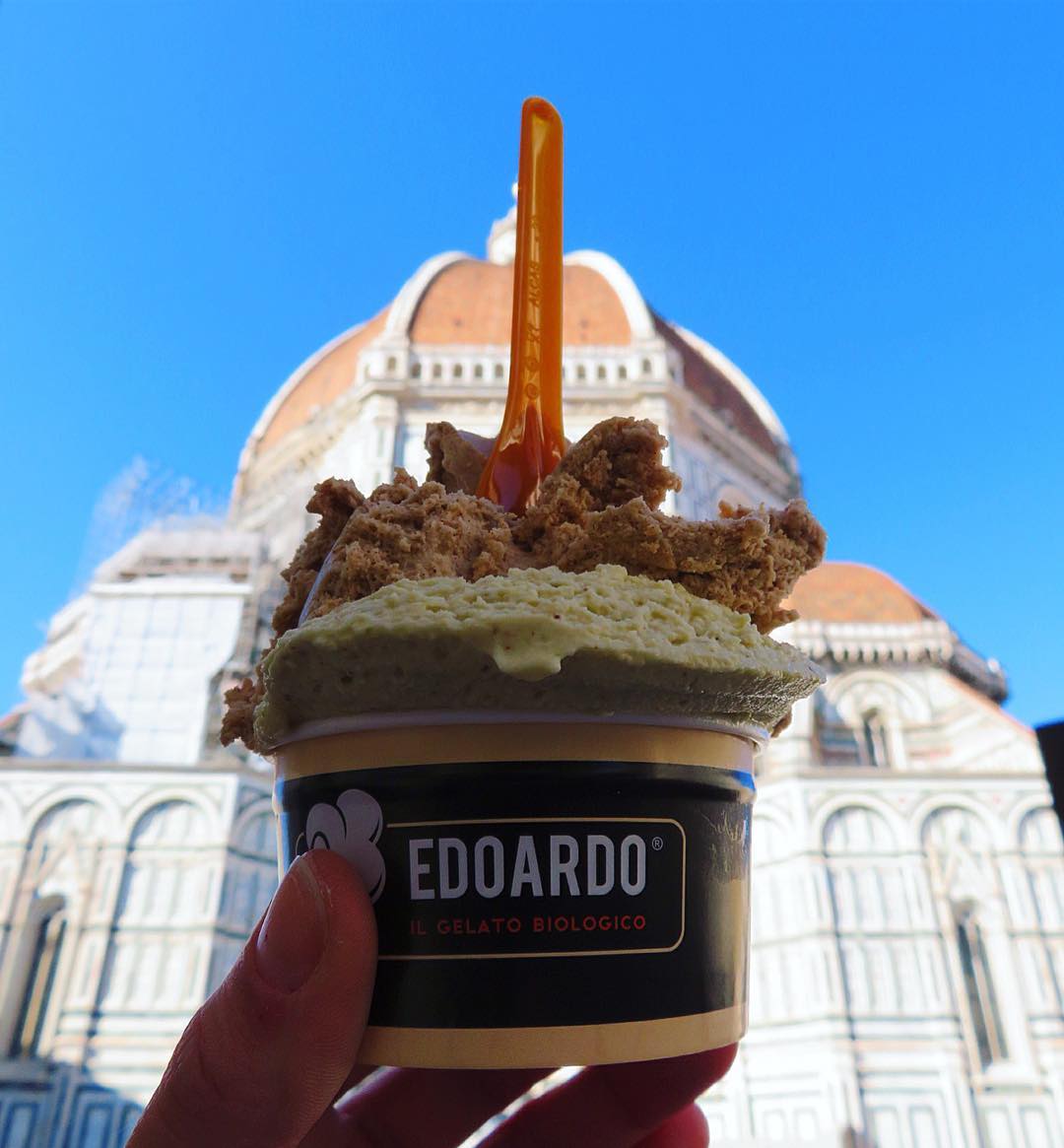 You didn’t think we would write this list without including gelato, did you?! It’s a must if you visit Italy, and you can find some excellent, local gelato spots in Firenze. We challenge you to go out of your comfort zone and dig into a creamy and addicting flavour that you haven’t tried before! Pro tip: When you pass by a gelato shop, look to see that there are no bright green or pink colours in the batch. That means you found a gem of a gelateria.

Typical price: €2-6, depending on how big you go

Get it from: Any shop where you see large crowds of people drooling, particularly Gelateria Santa Trinita along the Arno River. 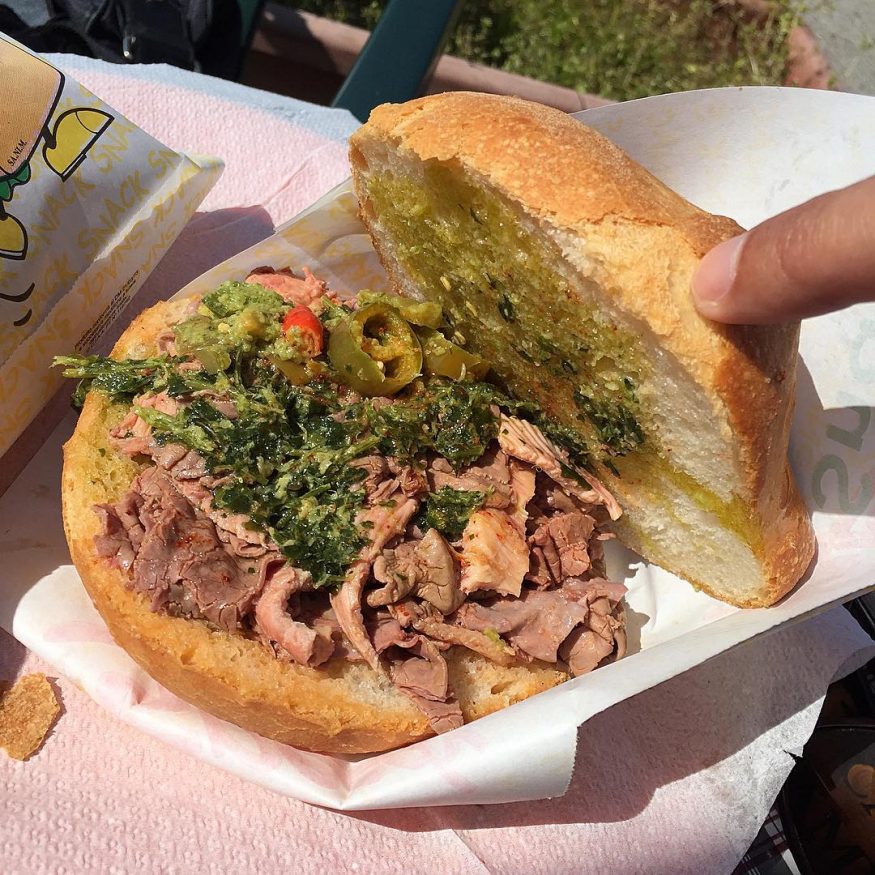 If you want to get real adventurous with your food experience, try lampredotto. Before we go into detail, remember — keep an open mind. There’s no beautiful way to put it expect that lampredotto is a tripe sandwich (tripe is the edible lining of a cow’s stomach… yum?!) It’s soaked in broth, served on a toasted hamburger bun and drizzled with a green or spicy sauce. You can’t say you’ve been to Florence without taking a beefy bite!

Get it from: Lampredotto is a classic street food that you can find at food stands around the city.

If you’re looking for the quintessential Florentine pasta experience, order Pappardelle Cinghiale. It’s a very rich pasta dish cooked with a wide noodle (pappardelle) in wild boar sauce (cinghiale). t’s one of those meals where you’re like, “I can’t finish all of this” and, before you know it, you’re scraping the bottom of the plate.

Get it from: If you want to go big, order it at Osteria del Cinghiale Bianco. Otherwise, you can find it at most local trattorias as pappardelle cinghiale (or anything with boar) a traditional pasta dish of Florence. 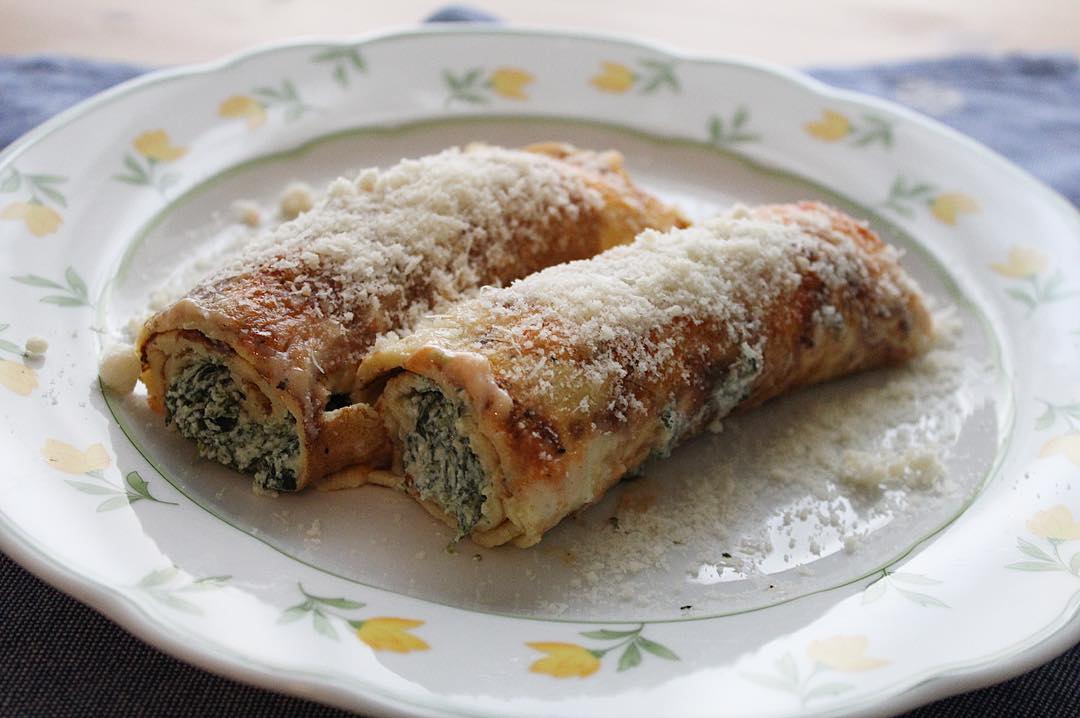 This is Florence’s version of the tasty crepe. They take a thin pancake crepe, stuff it with ricotta cheese, add spinach, drizzle a buttery, white sauce all over it and stick it in the oven. Now close your mouth, you’re drooling! You might find crespelle alla fiorentina served with that good ole Italian tomato sauce and heaps of grated parmesan. Better than the French? It’s a close call.

Get it from: Super traditional Tuscan trattorias. We’re talkin’ hole-in-the-wall, non-English speaking type of places. You know, the best.

Zuccotto means “little pumpkin” in Italian, and no it has nothing to do with the gourd-like fruit. It’s considered the oldest dessert recipe in Florence (it’s been served since the 16th century!) Zuccotto is a liqueur-soaked sponge cake filled with whipped cream, candied fruit, almonds and toffee, then drizzled with a chocolate ganache. It’s served semi-frozen or chilled. Cut us a slice!

Typical price: €5 for a slice

Get it from: Pastry or ice cream shops. If you’re lucky, on a dessert menu.

Did we make you hungry? Let us know your favourite food to devour in Florence in the comments below…