I’ve lived in Paris on and off for several years now, trying to spend as much time as I can soaking up everything this magical city has to offer. I may not know the secrets to the city’s finest dining institutions as a freelancer and blogger on a budget, but I do know how to eat my way around Paris on the cheap. In fact, I think I’m approaching expert status. From flaky one euro croissants to authentic Indian and Asian food (plus the essential hot chocolate to fill your belly on a grey Paris day), these things I know well and I’m sharing some of my secrets to the tastiest cheap eats in Paris below. 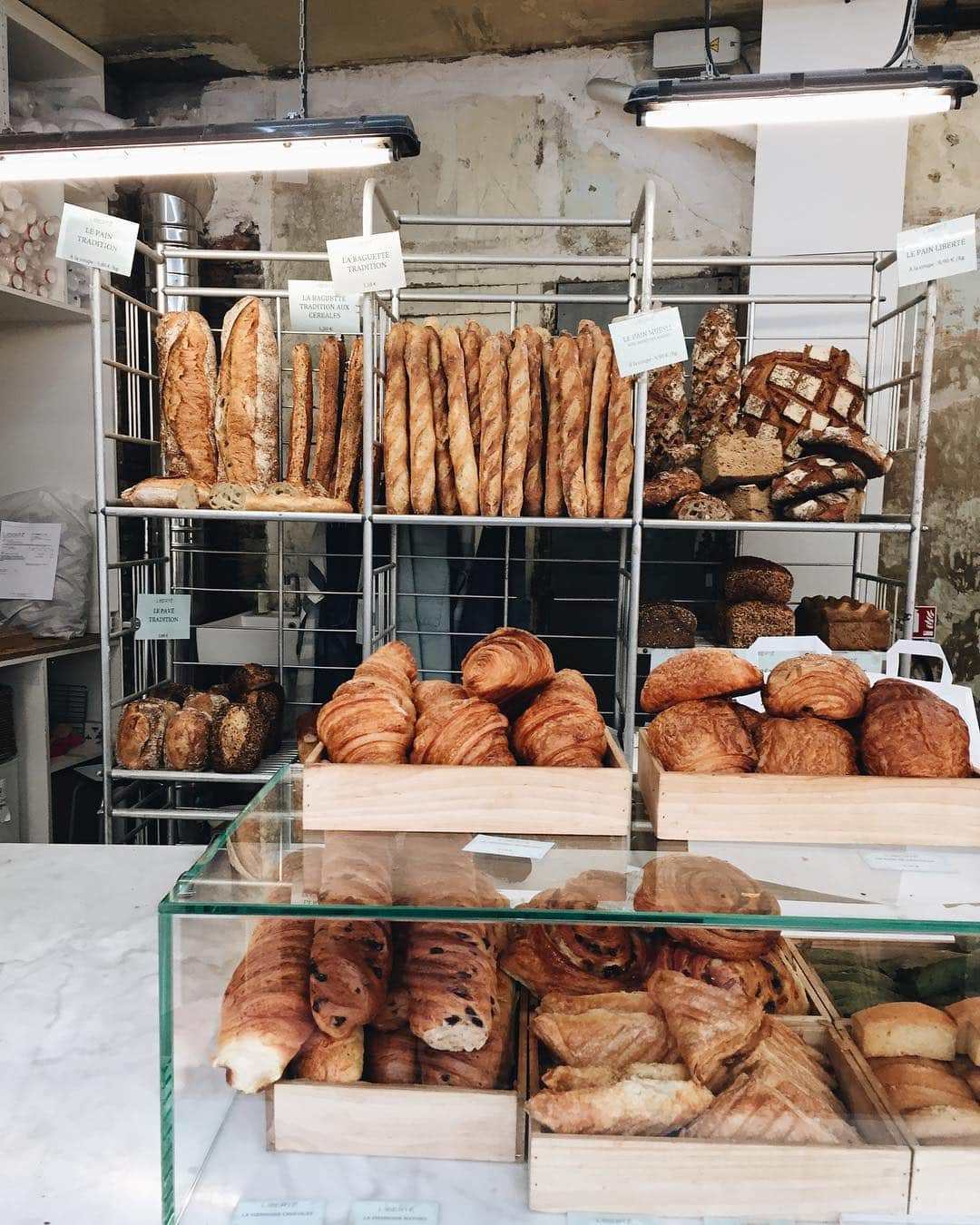 The cheapest way to fill your tummy in France is always at the boulangerie. Pop into one of Paris’ best bakeries for a flaky one euro croissant, pain au chocolat or baguette. Pick up a sandwich for around five euros or choose from the always impressive spread of beautiful sweet treats in the cabinet, pointing at the one that catches your eye. Some of my (and Paris’) favourite bakeries include Du Pain et Des Idées and Liberté in the 10th arrondissement, A la Flûte Gana in the 20th and Blé Sacré in the 12th. 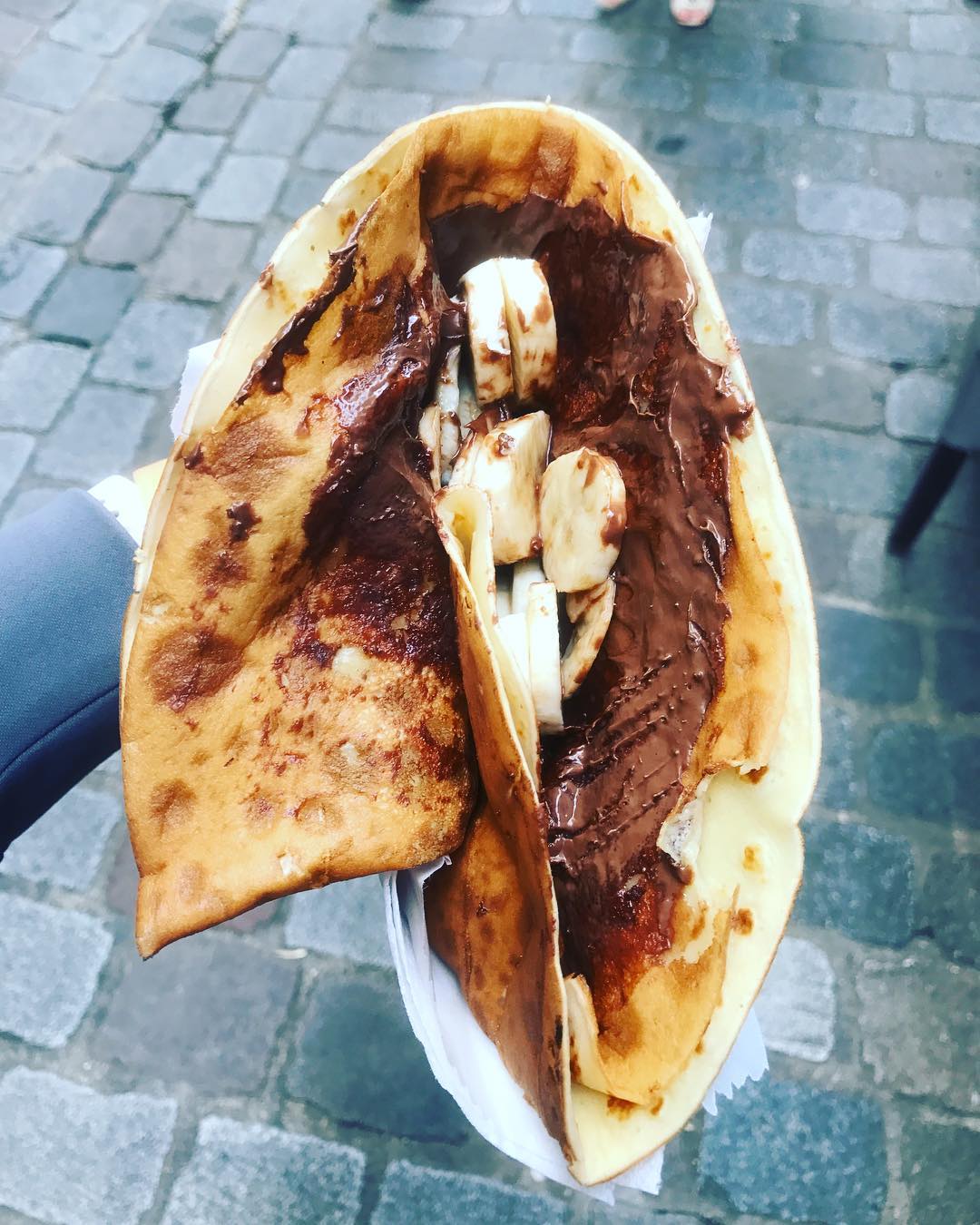 As a vegetarian, French crêpes are one of the cheap eats in Paris I can easily get on board with. For under 10 euros, you can sit down in some rather lovely crepêries to some of the most mouth-watering meals in the country. At Breizh Café I’ve devoured the sweet vanilla butter ones. At Lulu La Nantaise I’ve savoured every bite of the spinach, egg and chèvre savoury variety. At Crêperie Brocéliande I’ve opted for the more classic cheese and onion confit crêpe. For an even more affordable crêpe, find a takeaway or emporter window and walk around Paris with your treat. La Droguerie in the Marais is great for this as well as any of the crêperies around the Gare Montparnasse for authentic Breton crêpes. 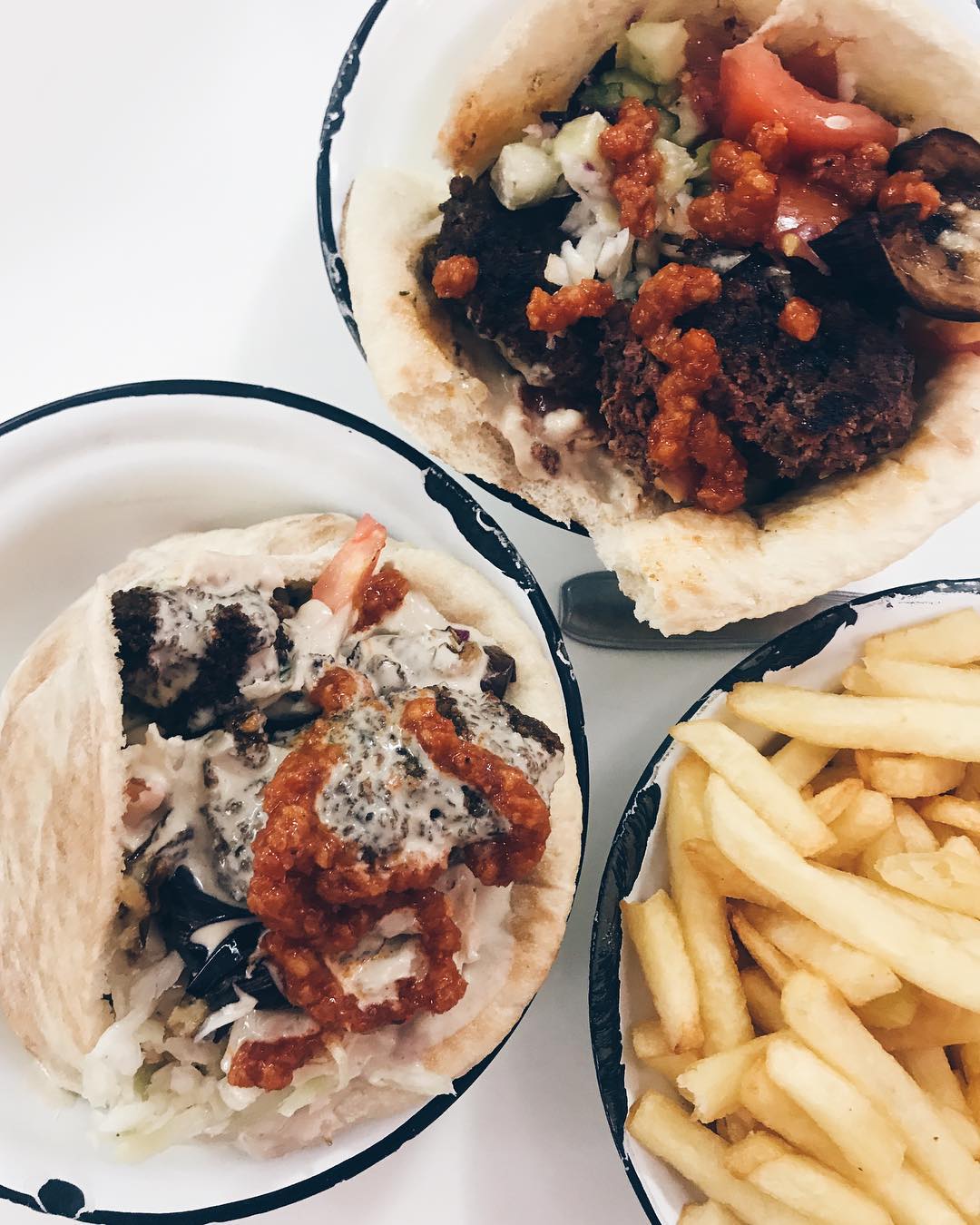 Paris is filled with great falafel shops. Most Parisians would agree though that the very best falafel in the city is to be found along the Rue des Rosiers. It’s an all-out war between L’As du Fallafel, Chez Hanna, King Falafel Palace and MI-VA-MI, who all sit within metres of each other on a foodie street in the Marais. For the record, I’m a L’As du Fallafel supporter but I will say, they’re all pretty incredible. If you’re looking to go a step up from these falafel shops, find some amazing authentic Israeli street food nearby at Miznon, where you can sit down and gorge on the good stuff. 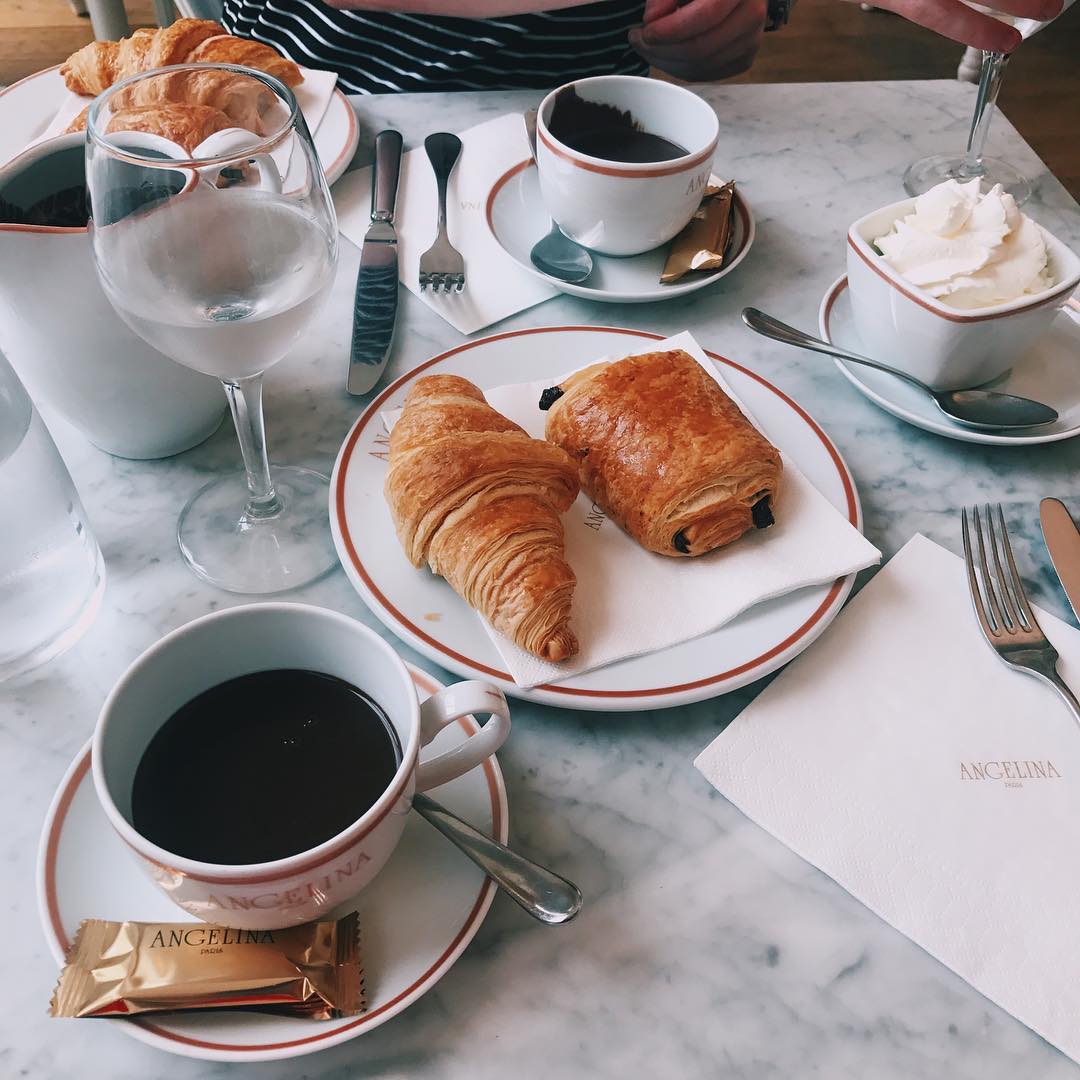 While not exactly a cheap eat, France as a country prides itself on its hot chocolate, the best of which has to be from Angelina. Upon trying this thick, creamy concoction with just the right amount of sugar for the first time, I immediately felt the widest smile of my life spread across my face. It’s just that good. Angelina has two locations, the busy, more formal cafe near the Louvre where you’ll often have to line up to get your hands on this chocolatey goodness, and the takeaway only shop on the Left Bank where there’s never a line. 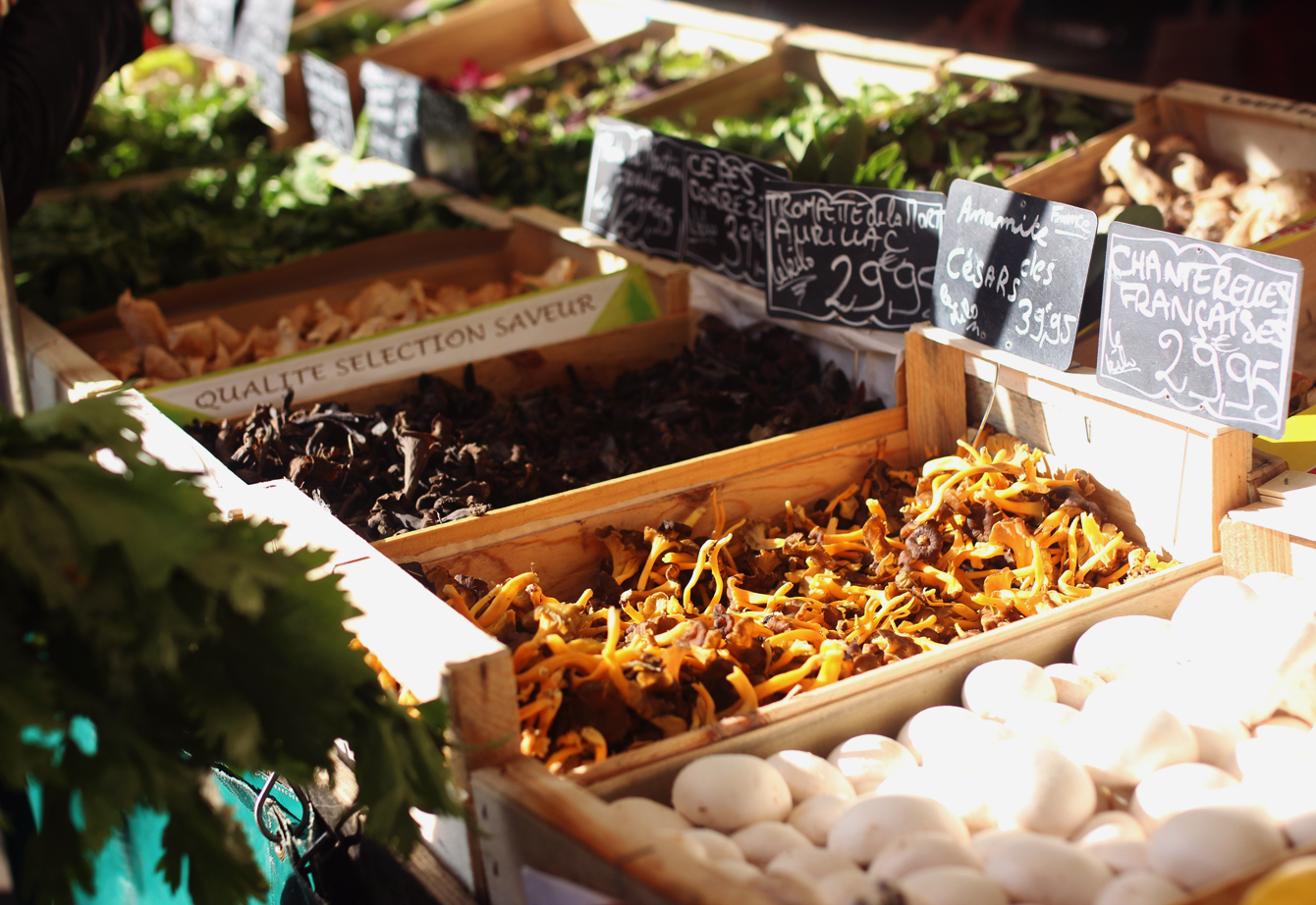 Parisians (and the French in general) care about food, which is why you have to get into the right mindset to find the best cheap eats in Paris. Market shopping is practically a sport here: finding the best vegetables, cheeses, meats and fruits one by one, consulting with your supplier in detail on the origins, production process, taste, age. I’ve seen it all go down at the markets. So needless to say, the spread on offer at the markets around Paris is incredible, and often much cheaper than supermarket offerings. Do a little research to find the best market near you or near a park that you’d like to picnic in. Check the market days and times and pick out everything you need for a French picnic at a low price. My favourite markets are the Marché D’Aligre for the best quality to price ratio and the Belleville markets on the Rue des Pyrénées on a Sunday for the cheap prices and proximity to Parc de Belleville and Parc des Buttes Chaumont. 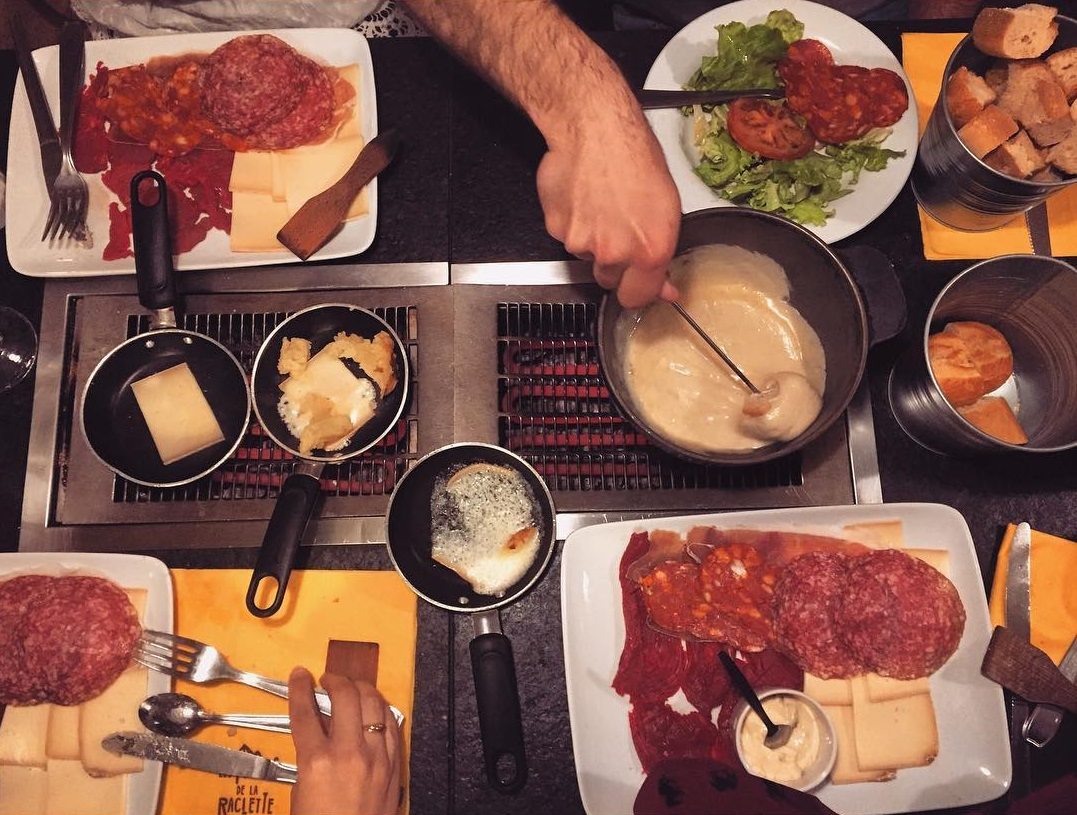 Let me tell you about fondue…it’s basically a boiling pot of melted cheese mixed with white wine, cooking continuously over a little burner on your table, waiting for you to dip your French baguette in and eat. It’s incredible and cheap – if you find the right place! I recommend Le Chalet Savoyard for fondue and Les Fondus de la Raclette in several locations for fondue’s equally delicious close cousin, raclette, as well as traditional fondue. 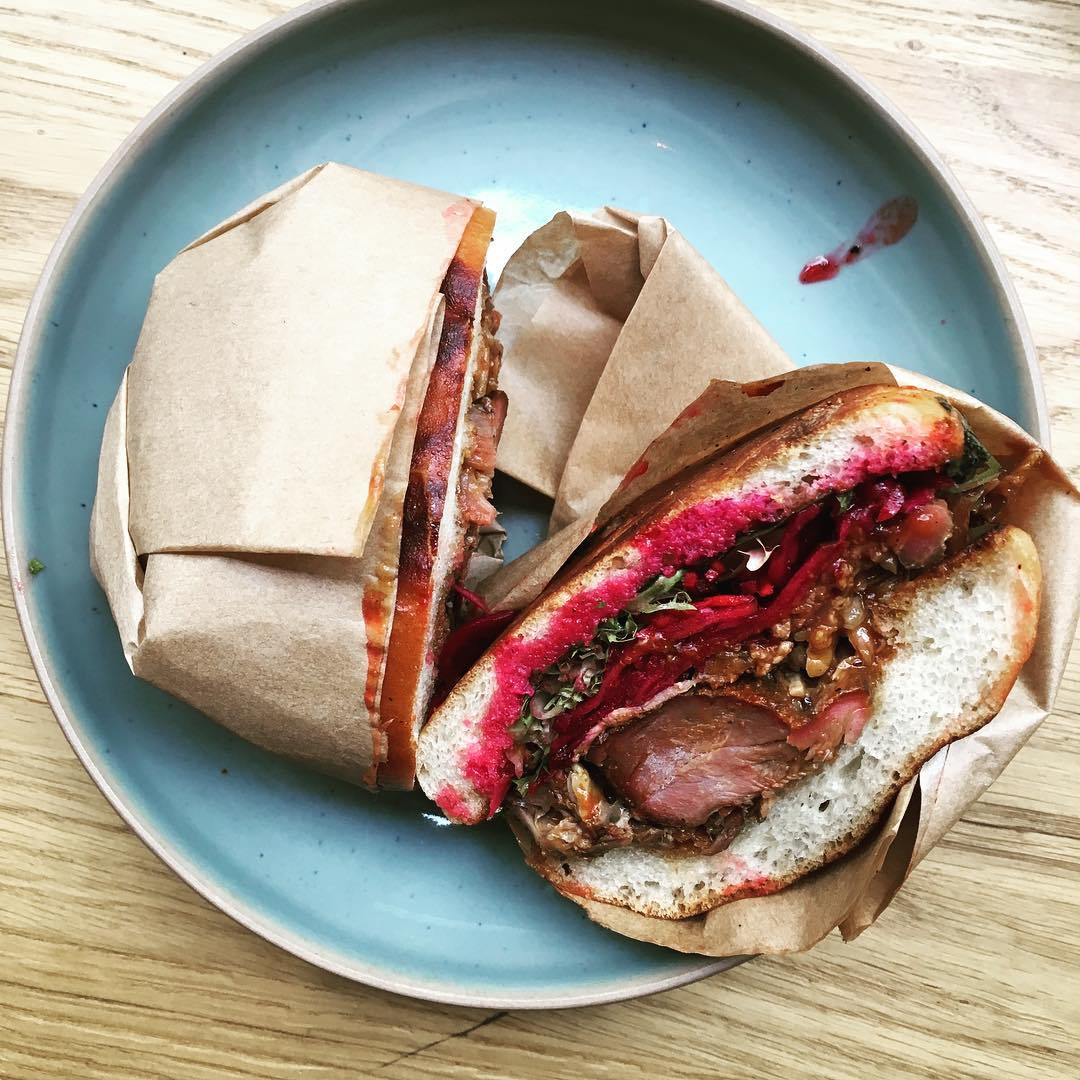 Paris has a burger addiction which I fully support, meaning the city is filled with great burgers. From the classics found on the menus of pretty much every French bistro to the hipster joints serving those with a modern twist, Paris has the burger of your dreams – and usually for around 10 euros. Hipster favourites include Paris New York (vegetarians drool over their deep fried mushroom and cheese patty), Blend, Le Camion Qui Fume and Frenchie To Go. Meanwhile, Big Fernand rates high too for its burgers filled with regional French specialities and Le Ruisseau is the place to go for a fancier and very French version of the American classic. If you’re looking for cheap eats in Paris, look no further than the nearest bistro for a quick burger fix. 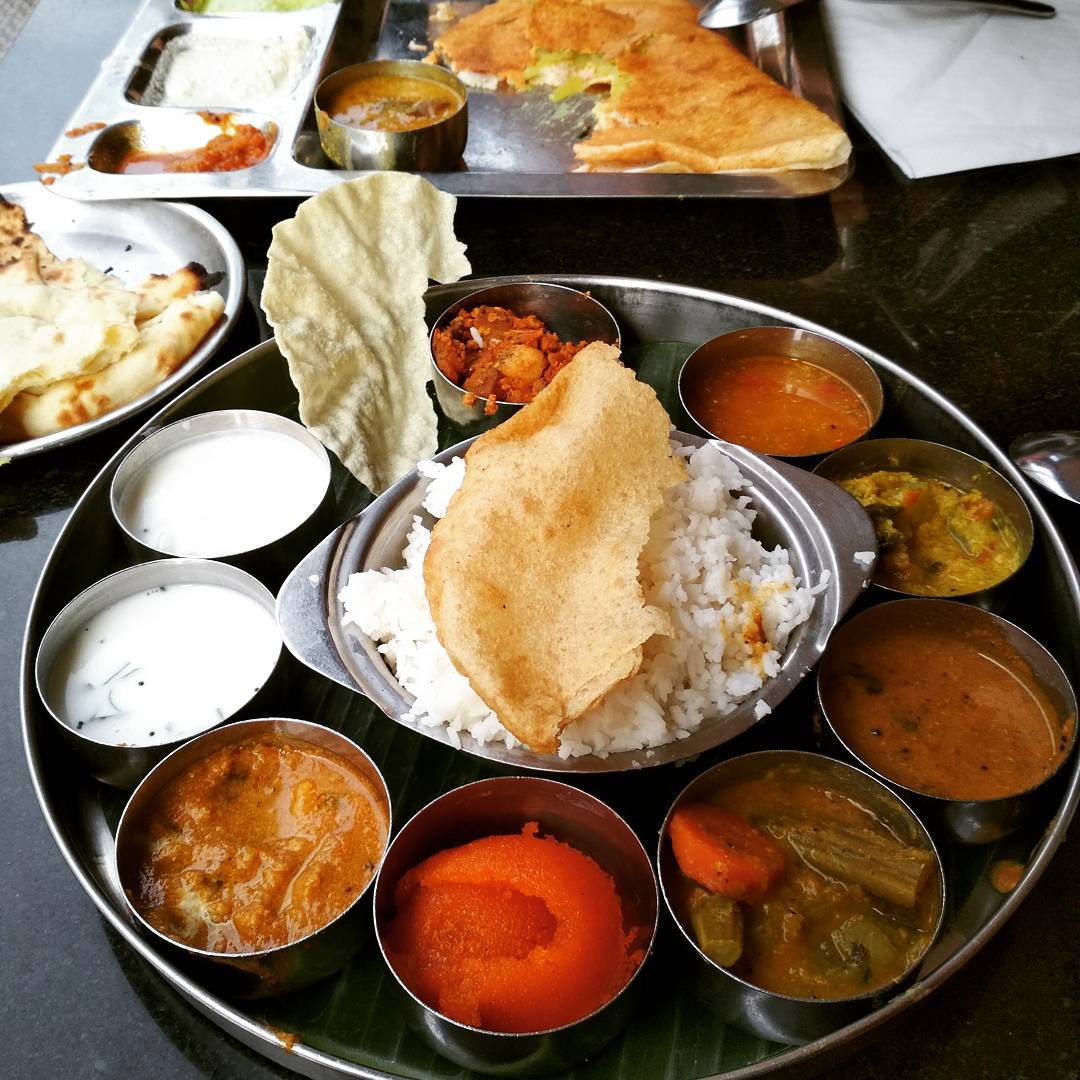 I was pleased to accompany a friend to Little India in Paris recently. This friend had personally tried each and every one of the Indian restaurants surrounding the Gare du Nord train station over his eight years living in Paris. Paris has its own piece of India here, full of very authentic, cheap Indian food. This area is great if you’re looking for a break from all the French food or if you’re a vegetarian or vegan needing an easy, cheap eating option. Saravanaa Bhavan and Sangeetha are great for vegetarians and Muniyandi Vilas has incredible Sri Lankan food as well as Indian dosa pancakes but really, you just need to follow your nose and keep your eyes open for the more popular restaurants to know what’s good here. 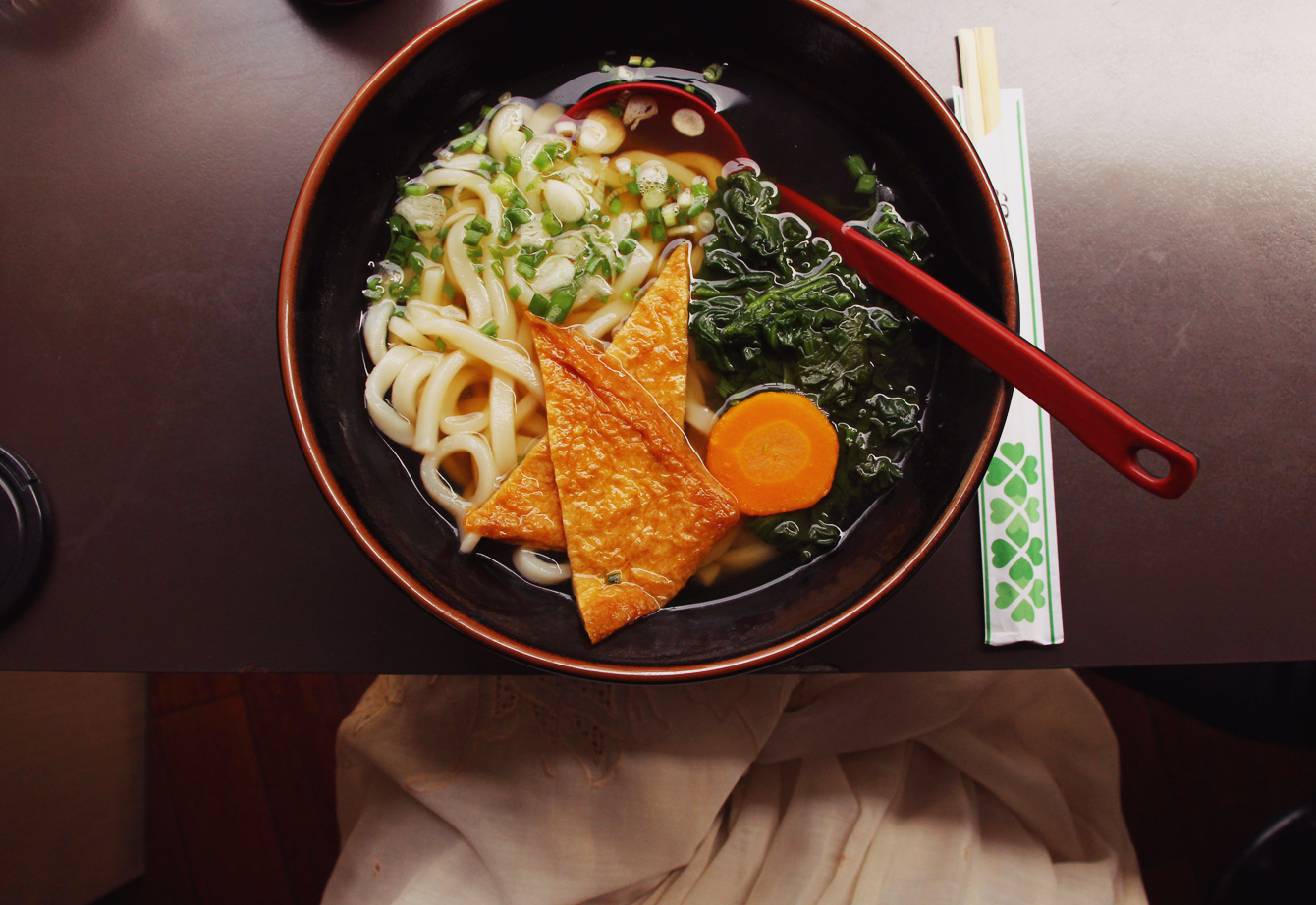 Paris also has its own little Japan set up all along the Rue Saint-Anne right in the centre of the city, tucked in amongst some of the city’s oldest and grandest buildings like Madeleine and the Opèra Garnier. Noodles, sushi, teppanyaki plus a few Korean restaurants thrown in the mix too will keep anyone on a budget very full and happy. My friends and I always end up at Higuma for their Chinese/Japanese noodle soups, Kunitoraya for udon or Aki for Japanese curry. As with the Gare du Nord’s little India though, keep your eyes open for the more popular restaurants and you can’t go wrong in this area. Note: Come earlyish (i.e. before 8pm) or be prepared to wait in line for a table at the best restaurants along this stretch. 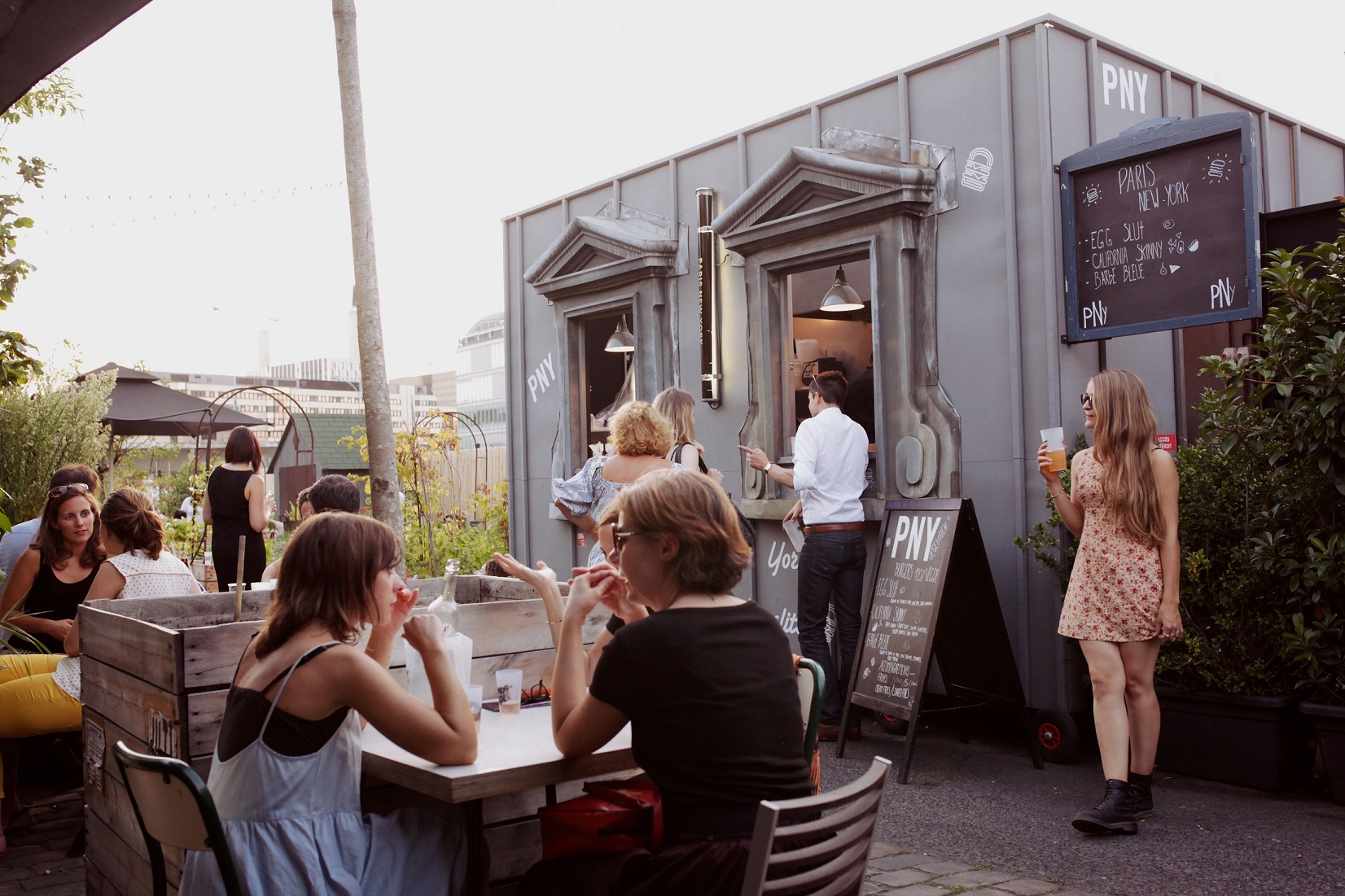 Whether it’s cheap eats in Paris (or anywhere in the world for that matter), what traveller or student on a budget doesn’t know to look for street food? As a city with plenty of both students and travellers, Paris has some great street food options. Ground Control has a tasty array of some of the city’s coolest restaurants, setting up stalls in their outdoor space whilst the Marché des Enfants Rouges in the Marais has a great mix of cheap food including Moroccan tagine, burgers, sandwiches and Japanese noodles. The best (or worst) thing about the street food in Paris is that it always comes with a side of Parisian hipster, so you can people watch away while you eat. 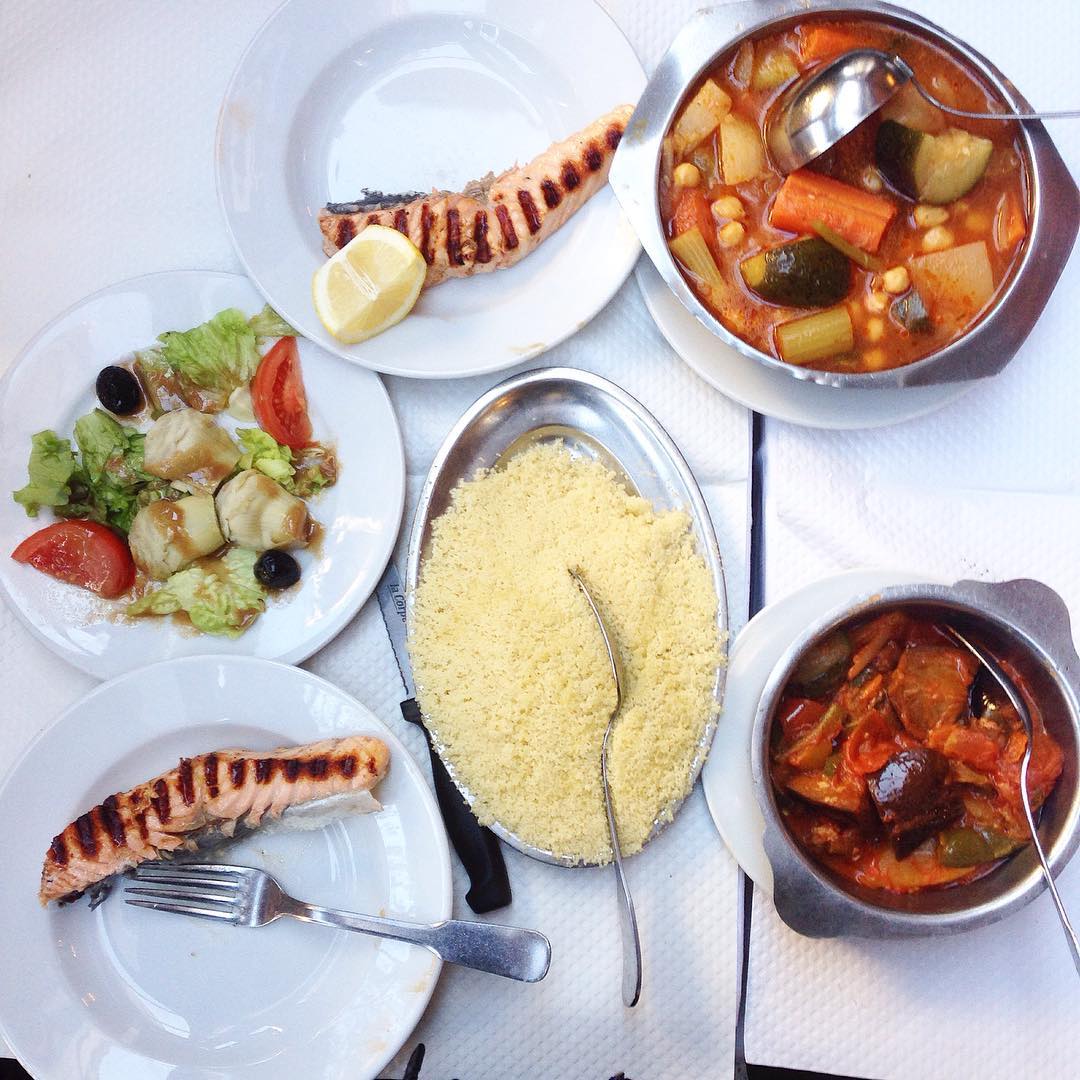 France’s close proximity to Morocco in North Africa means you’re never far away from a Moroccan restaurant anywhere in the city. A Moroccan tagine can make for a healthy, delicious and affordable meal in Paris with Chez Omar or nearby Zerda Café with the pretty Moroccan-style tiled door both being very good options. Le Traiteur Marocain found in the Marché des Enfants Rouges undercover street food market also serves up incredible Moroccan food in a more casual setting. 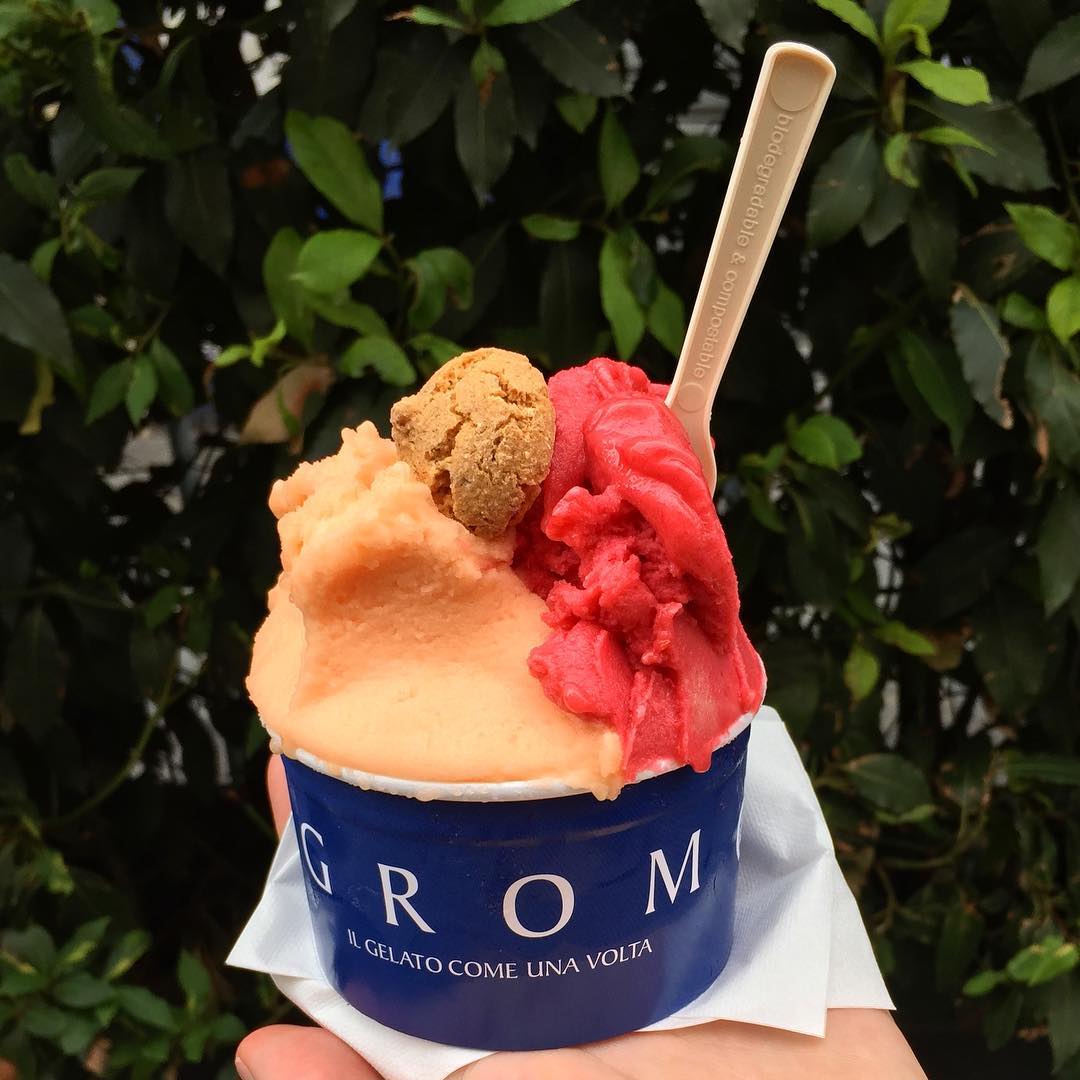 If you need a sugar hit on your wanderings around Paris, the best option is to head straight to the île Saint-Louis, a little island between the Left and Right Banks of Paris. Grab a takeaway cone from any of the various vendors selling the best ice cream in the city, Berthillon, or go straight to the source to the Berthillon shop found on this cute little island too. If it’s Italian gelato you’re after, Pozzetto in the Marais or Grom with various shops around Paris are your best options. 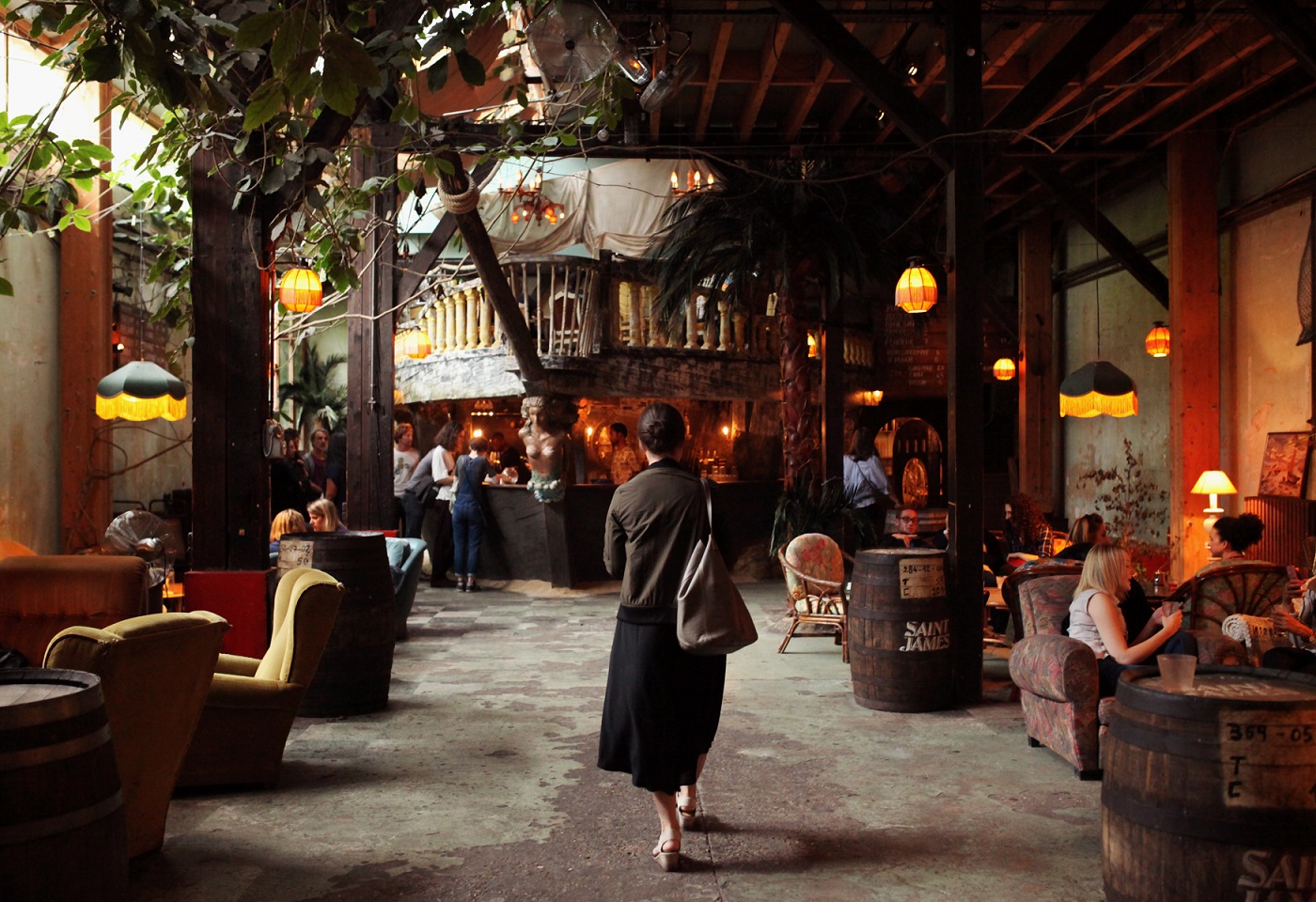 Le Comptoir Général in the cool Canal Saint-Martin area in Paris’ East has to be one of the most intriguing bars in the world. Sitting amongst African memorabilia and French antiques, in what looks like an old greenhouse with a wooden pirate ship as a bar, you should head here for brunch on Sundays or for affordable West African and Caribbean cuisine any day of the week. Order a cocktail from the pirate ship bar and you’ve got yourself a fun day. 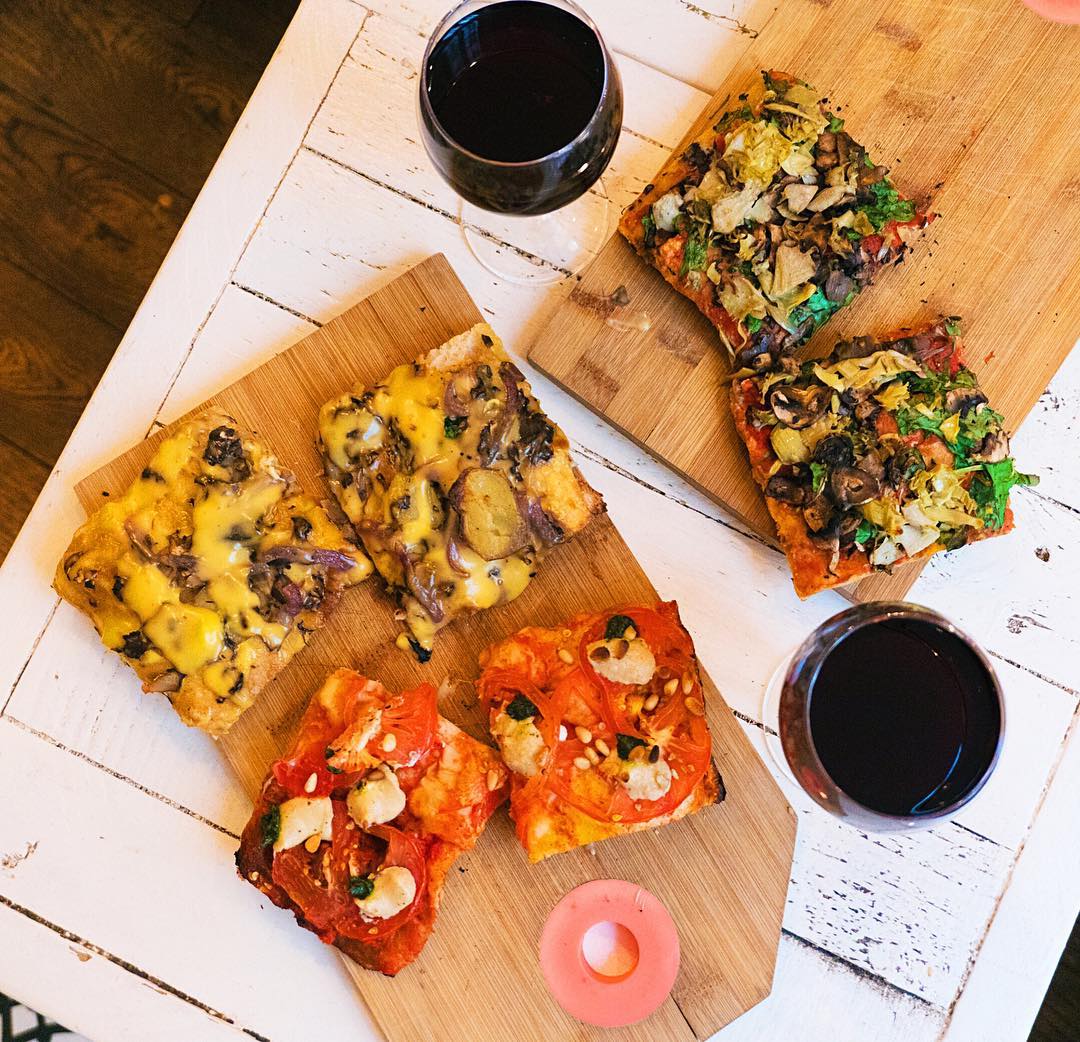 With so many American expats living in Paris, it’s no wonder you can find a lot of American-style food in this city. My favourite micro-niche on the food scene is the healthy takes on American classics. I go to Bob’s Kitchen at least once a week for a big hit of vegetables in their famous and affordable veggie stew, they also do incredible soup, bagels, fruit bowls and buckwheat pancakes. There’s also Hank Burger and Hank Pizza, which are not only a great option for cheap eats in Paris, but also feature weekly on my eating-out rotation for delicious vegan burgers and pizza. 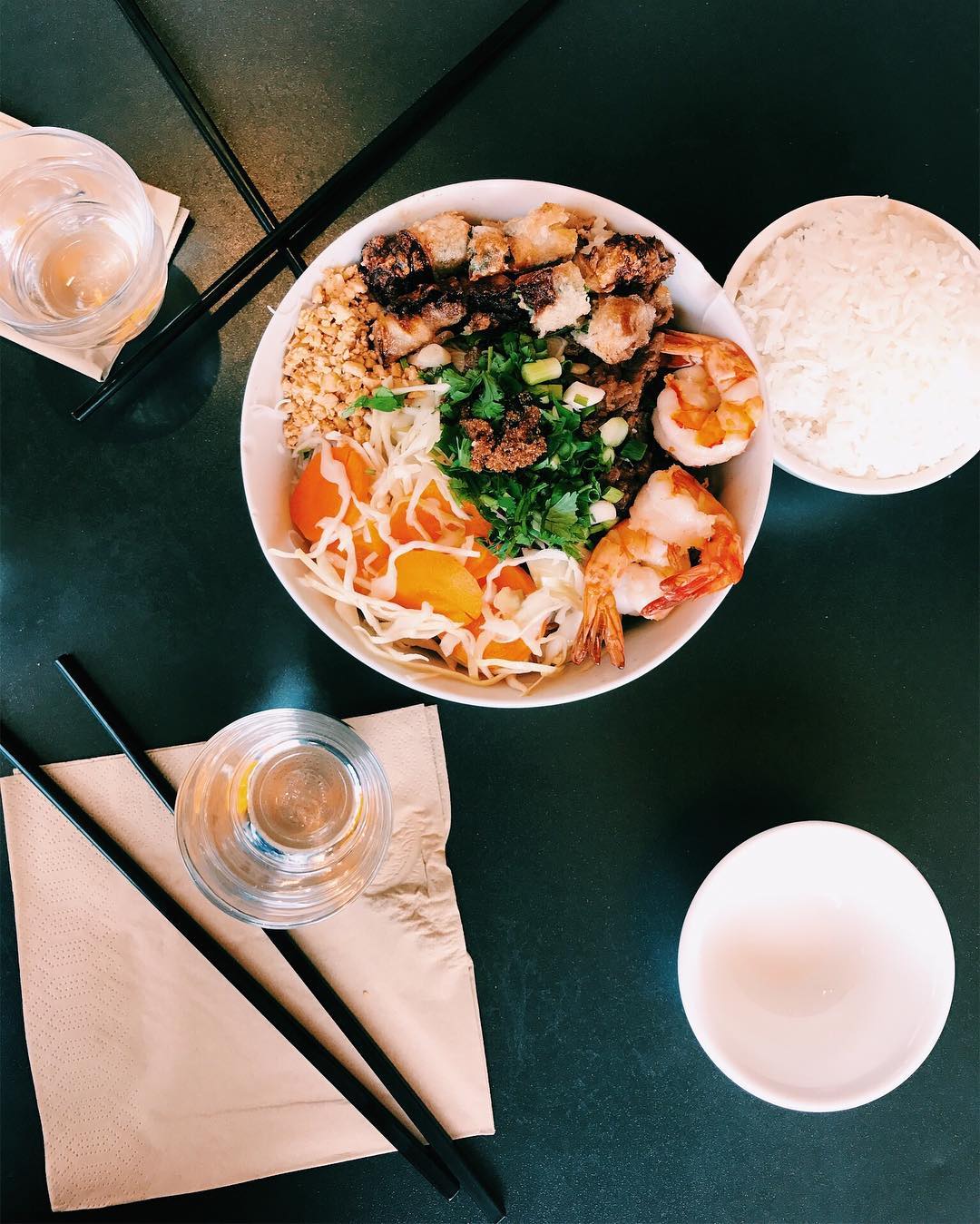 Le Petit Cambodge is Paris’ favourite Cambodian food, with two locations in Paris’ Canal Saint-Martin. They’ve got noodle soup, fresh salads and delicious curries as well as Cambodian and Vietnamese beer, all for a very affordable price. Who said cheap eats in Paris had to be unhealthy? 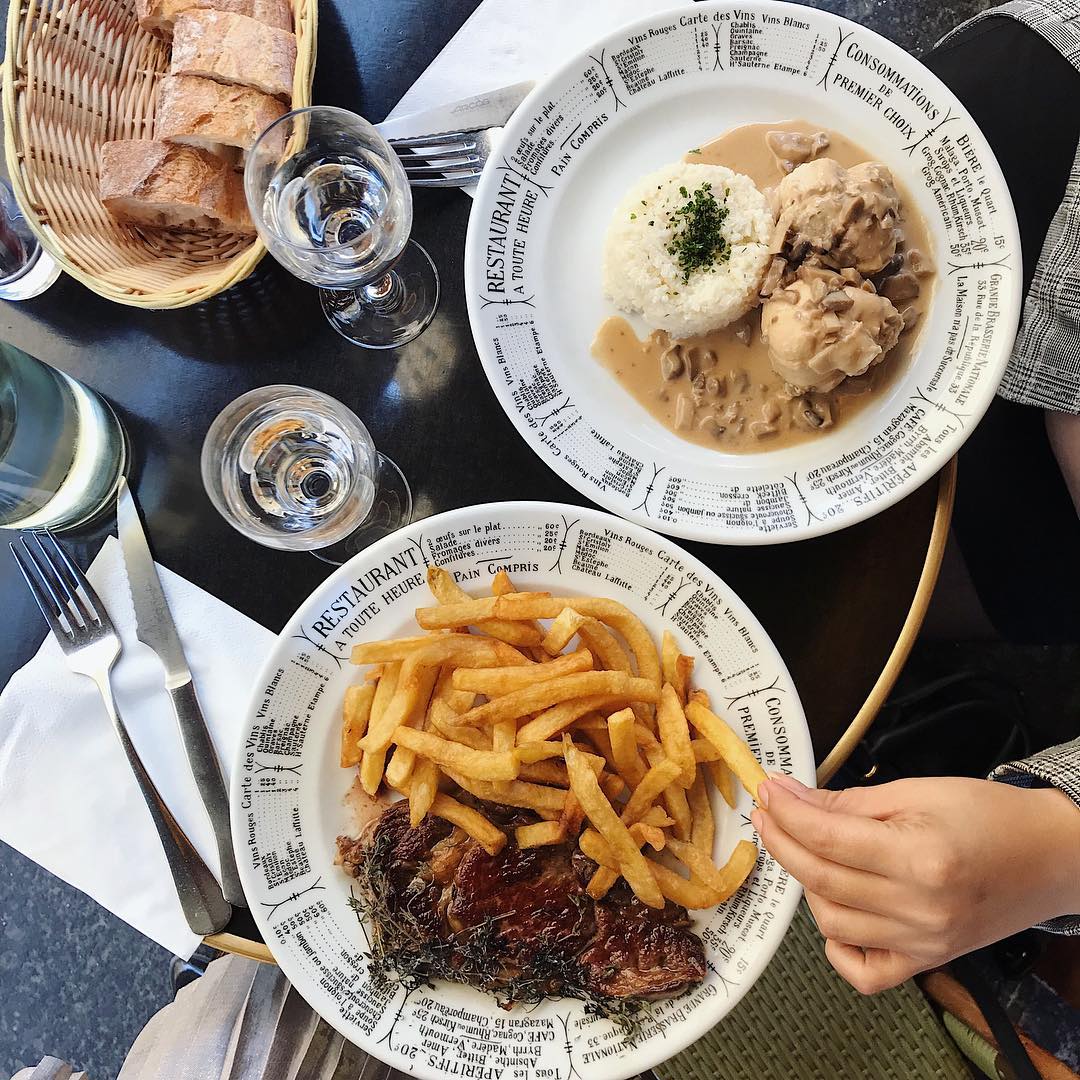 OK, so you’re in France and you actually want to eat French food, but on a budget? Le Baratin in Paris’ East serves up modern gourmet French food for a good price, Café de L’Industrie has that classic wooden French bistro interior with classic bistro food with a slightly modern take whilst Chartier and Bistrot Victoire serve up the traditional French classics in a cute setting for those on a budget.

🇫🇷 What’s your go-to option for cheap eats in Paris? Street food or market stalls? Let us know in the comments!

Katie McKnoulty is a nomadic freelance branding strategist and travel blogger. Originally from Australia, she roams the world for her travel blog, The Travelling Light, a blog for travellers, nomads and seekers, a collection of unique places, people and journal entries from her life as a digital nomad. You can follow her on Instagram, Facebook and Pinterest. She travels to find the soul in places, she lives to find secret places and people creating amazing things.