As a Parisian vegan food blogger, the main question I get every day is: “Where can I find the best vegan restaurants in Paris??” Obviously, having been raised in the country of cheese and “steak frites” I can totally relate to this question. But fear no more plant-based fellows, the vegan lifestyle is exploding in Paris and there’s so much to love! In this city’s stylish but stressful foodie scene, it’s good to find more healthy spots opening and the arrival of more vegan restaurants in Paris. Every month there’s a new place that blooms – so exciting! So here are my favourite places: you’ll discover a lot of variety from classic onion soup to traditional Vietnamese, hot dogs, pizza, burgers…. and of course…. croissants! 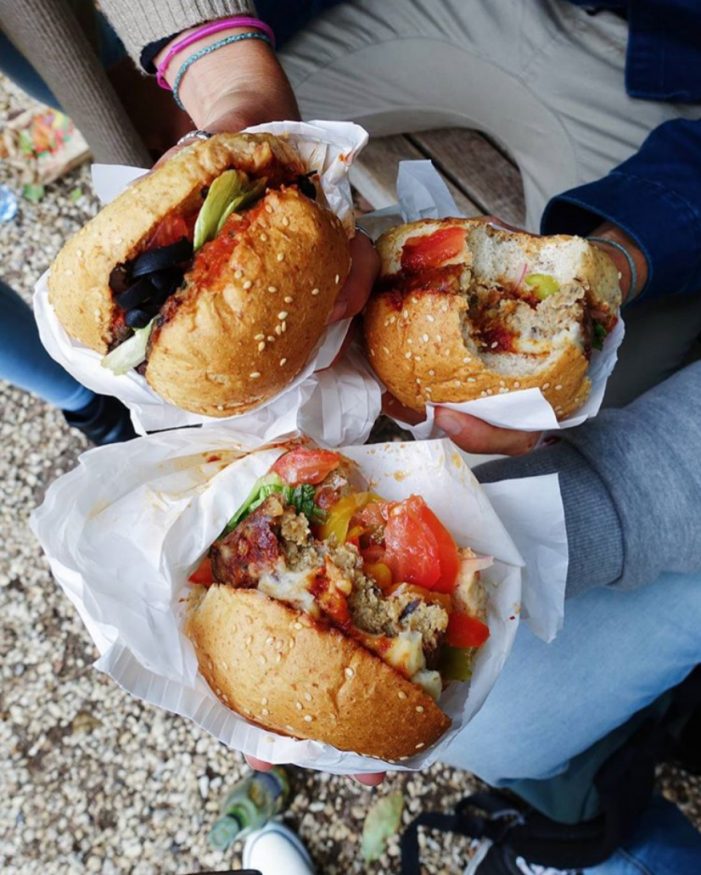 This is the most delicious burger place in Paris! Seriously, Hank (Have A Nice Karma) vegan burgers are so tasty and juicy – it’s the place all my friends want to visit when they come to Paris. My favourite burger is l’Allumé with smoky BBQ sauce and bell peppers. You also need to get the potato chips with homemade veganaise – they’re to die for. Situated in the lovely Haut-Marais area you can take away your burger in the Archives gorgeous garden and devour it on a sunny day. 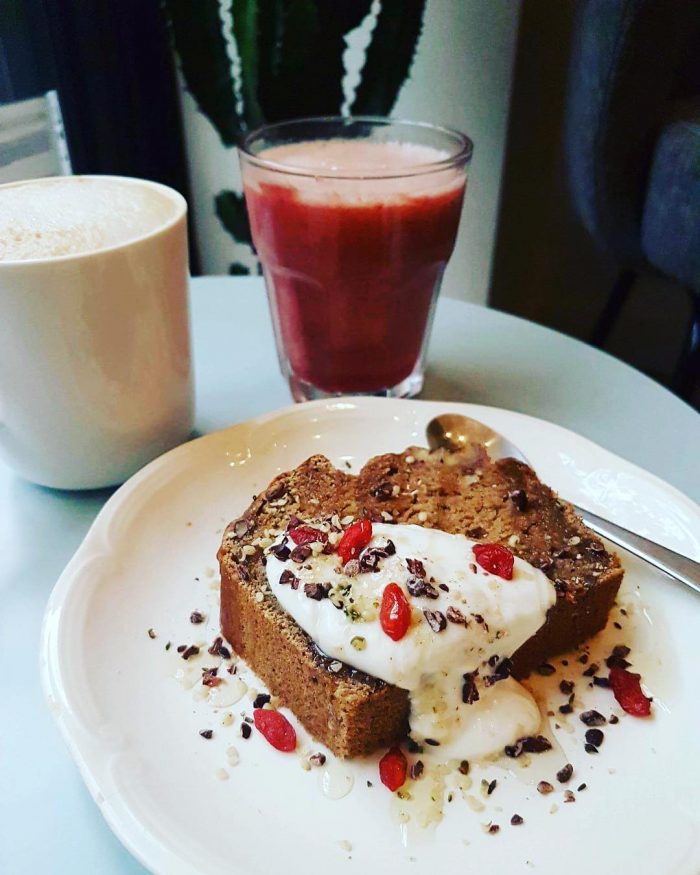 Comptoir Veggie just opened near my house and it’s now my new headquarters! The lovely chef Fanny makes everything vegan: you can have acaï bowls, granola bowls, Buddha bowls that change every week. Plus, there are tons of gluten-free options. Both their carrot cake and coco mango passionfruit cheesecake are drool-worthy – I highly recommend a slice of both. They also have a great selection of teas, matcha lattes and cold pressed juices. Definitely one of the best vegan restaurants in Paris if you’re looking for sweet snacks, breakfast foods and refreshing beverages. Whilst you’re in the neighbourhood make sure to visit the gorgeous Marché d’Aligre, which is one of my favourite places in Paris. 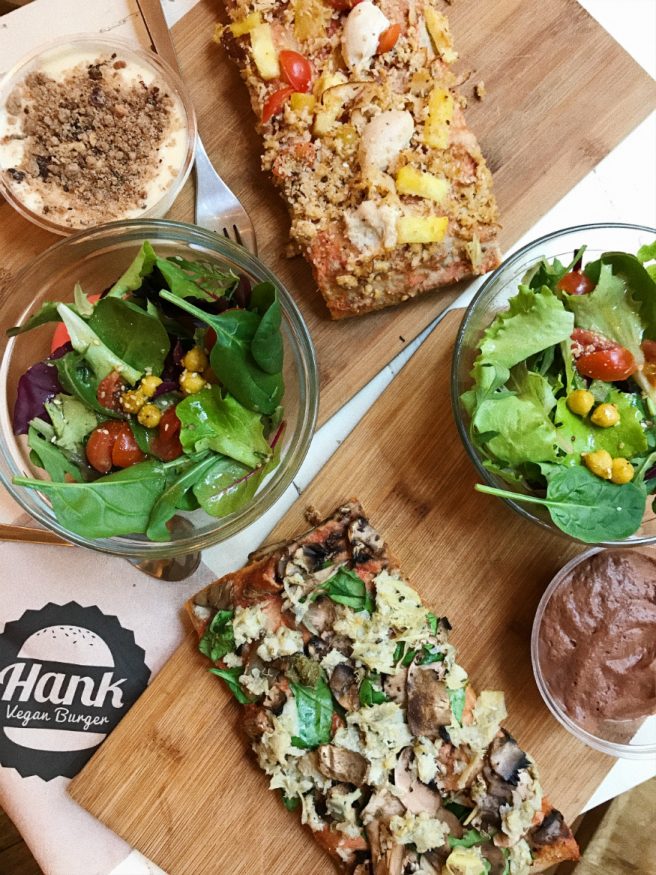 HANKering for some pizza by the slice? 📷:@parisbyvegan

The one and only all-vegan pizza al taglio in Paris. Situated in the very trendy Rue des Gravilliers (where the vegan scene is exploding at the moment with tons of restaurants and shops), this second Hank restaurant is extra chill. I highly recommend the Hawaiian pizza with ‘cream cheese’, pineapple and vegan smoked tofu. If you’re not a fan of the exotic, try the Dandy pizza with creamy truffle sauce, mushrooms and hazelnuts. They have a special pizza every season so you can splurge yourself discovering the new flavour. Plus, they also make very healthy sides, salads, tabouleh and offer gluten-free bases. Last but not least their chocolate mousse is divine: I’m addicted. 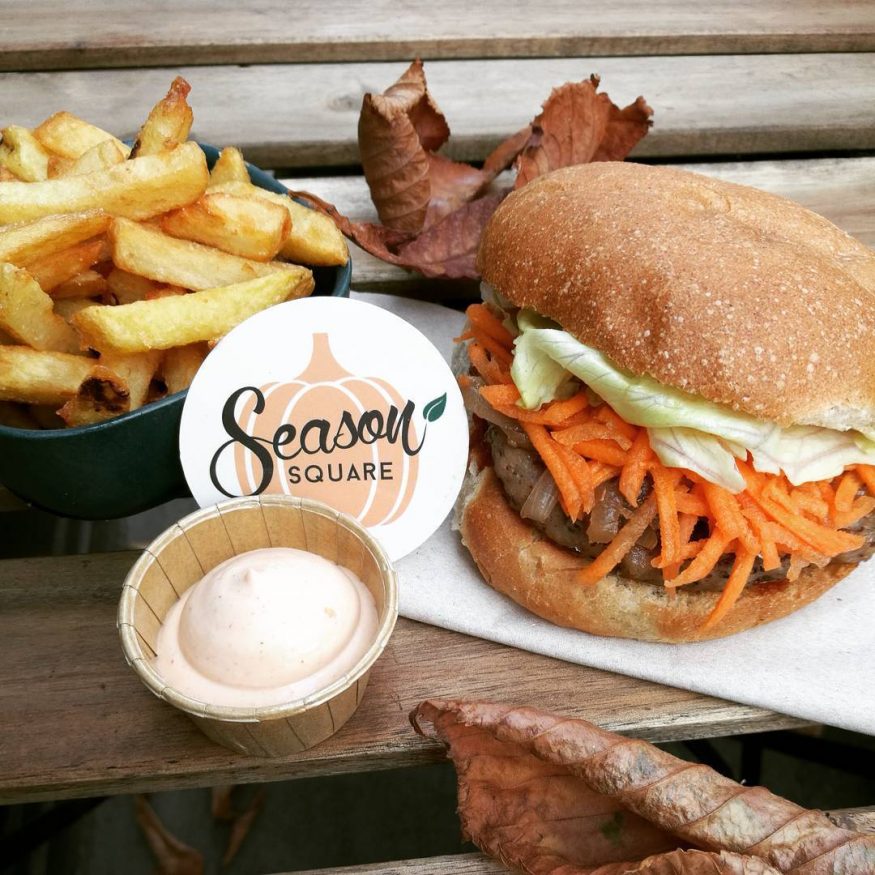 I discovered Season Square from their blog and their amazing recipes such as their one for vegan pizza cheese. So when they opened a restaurant, I had to visit on the first day, and the second day, and the third… They have one of the best veggie burgers in Paris, with a fantastic beetroot ketchup. They also do mouthwatering chocolate chips cookies, a BBQ Jackfruit sandwich and, if you’re lucky, get your hands on their cinnamon rolls because they are so so good! 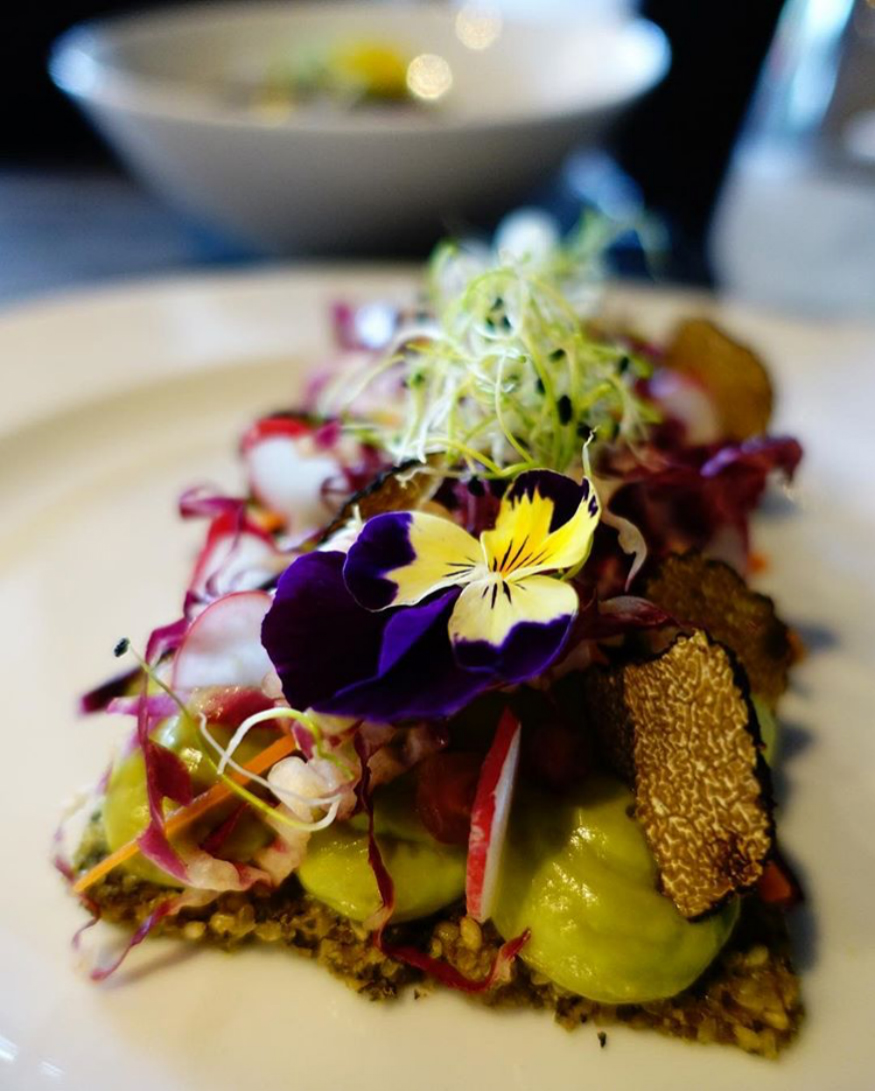 Almost too pretty to eat! 📷: @parisbyvegan

Of all the vegan restaurants in Paris, Gentle Gourmet is a little more chic than most. It’s the perfect spot for a special occasion, to celebrate your birthday, or for a romantic dinner. Everything is haute cuisine, from their savoury macaroni entrée to the very elaborate truffle pasta dish. Their desserts are so creative; I had a mascarpone sesame praliné with coconut rocher and blackberry coulis when I visited and it was the most amazing dessert I’ve ever tasted. 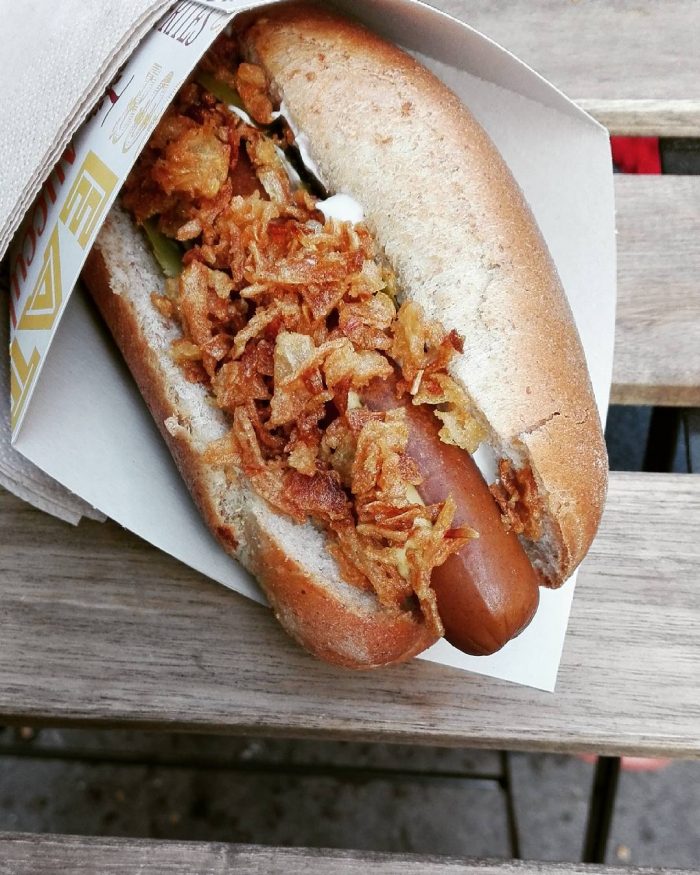 Hot Vog is the new place in town – finally, a vegan fast food joint in Paris. When I visit it’s impossible to order just one hot dog – you can’t resist a second! Their menu only has 3 options: L’indémodable, Le best-seller, and my favourite, Le Jaï Ho with a spicy Indian sauce. I love to get my food to take away and enjoy it in the nearby Jardin du Luxembourg. 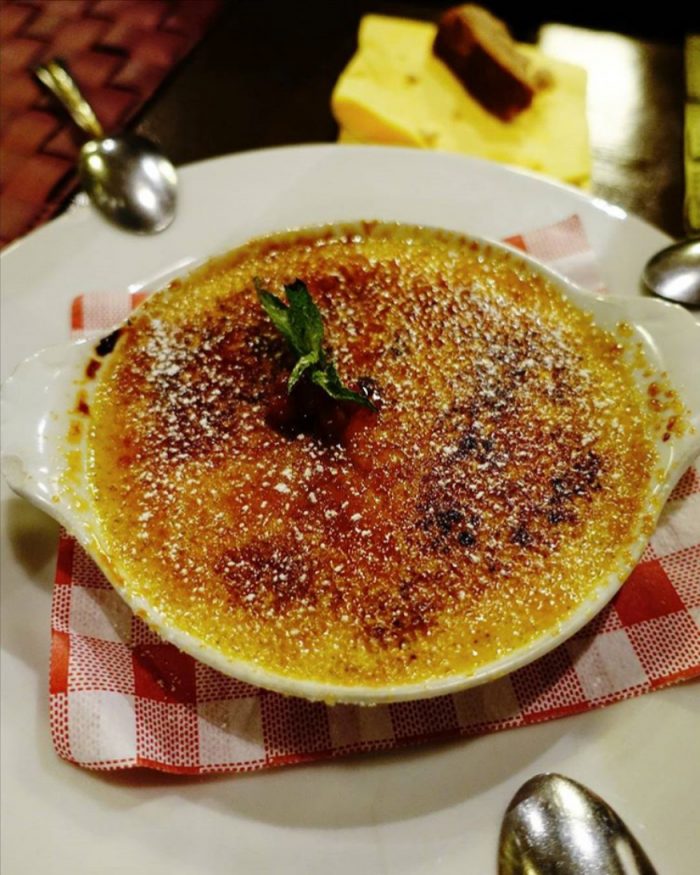 Think traditional French gastronomy made vegan – yes it’s come to life! From beef bourguignon to tarte tatin, this lovely restaurant does an excellent job at reviving tasty memories from every French person’s childhood. I come here often for the French onion soup with a glass of red wine, finishing this voyage to the past with the most exquisite crème brûlée… Ah heaven! I also highly recommend their spinach walnut lasagna with melted vegan cheese – a truly fantastic dish. 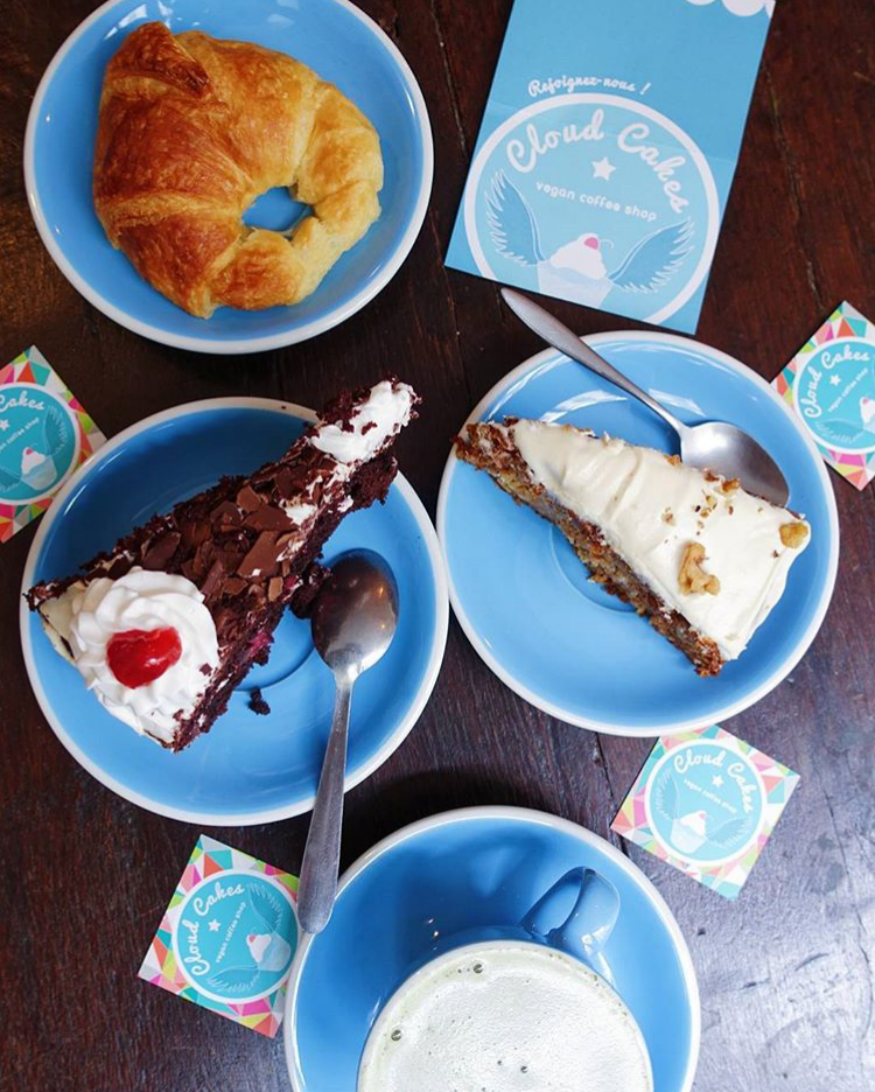 Cloud Cakes opened just over a year ago but this tiny lovely tea and coffee salon is crowded every day. They make luscious cupcakes, croissants, matcha latte, carrot cakes, black forest, lattes & more. It’s my favourite place to chill in the afternoon for a cosy tea time, chatting with a friend. 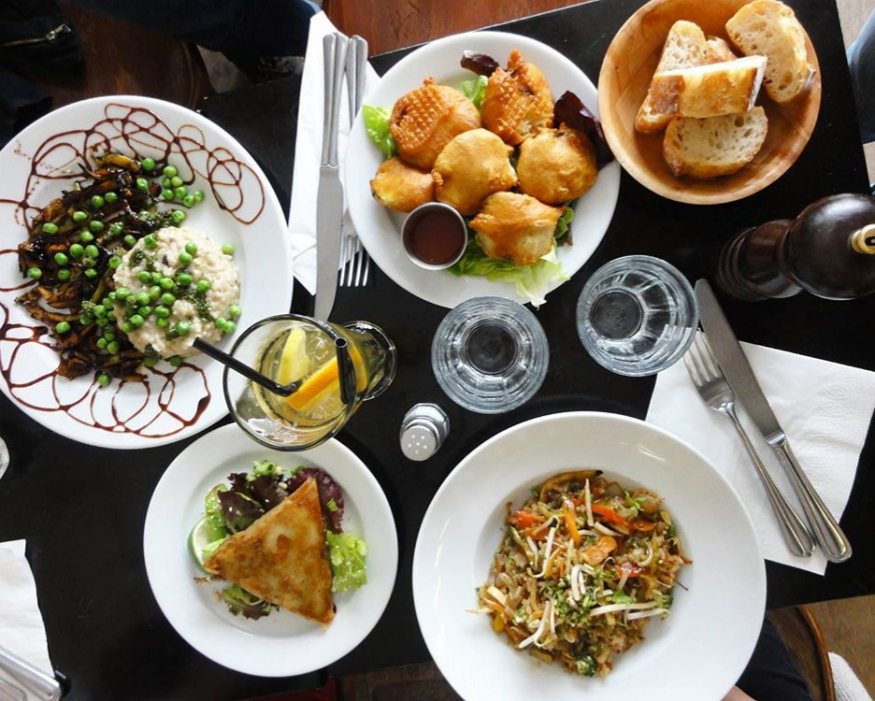 A French bistro brasserie at its finest! This very central restaurant (in the second district of Paris, near rue Montorgueil where all the cool boutiques are) has an eclectic and substantial menu from pizza, caesar salad, and spaghetti bolognese, to risotto, kebabs to pad thaï. I often go for brunch on Sunday with friends and we spend the afternoon sharing waffles, chatting and enjoying Parisian joie de vivre. I love the fact that everything is vegan yet it’s not really a big deal – like it’s the most normal, everyday thing – so everyone feels welcome and at home. 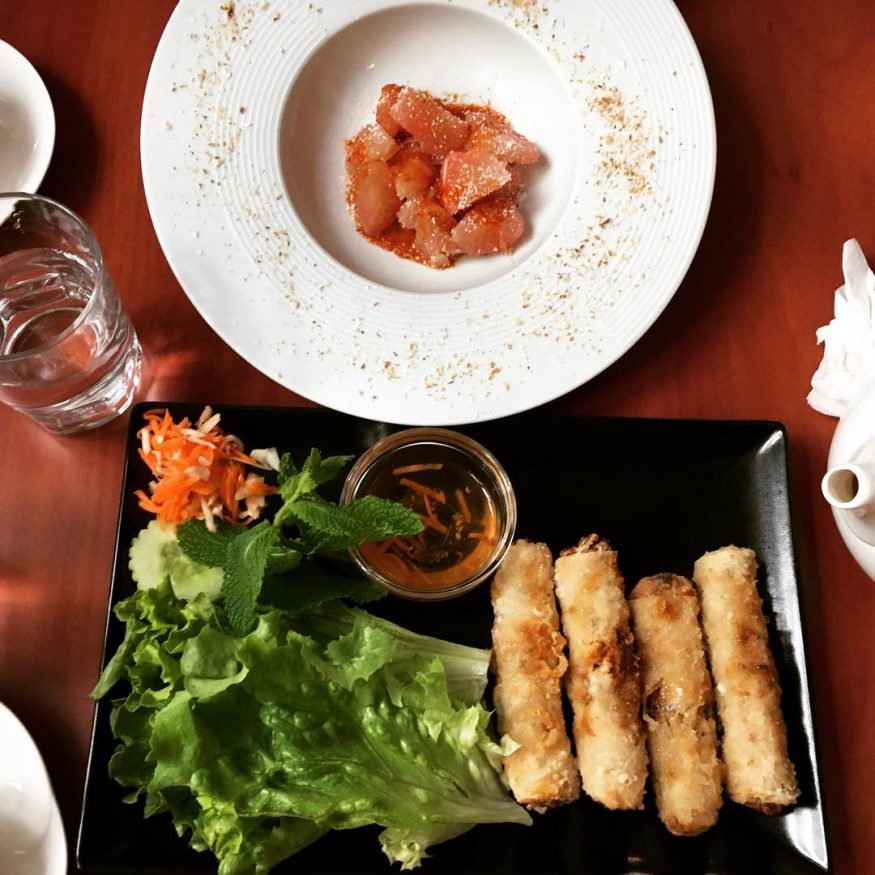 This new vegan restaurant in Paris is inspired by Vietnamese cuisine: everything is freshly cooked in this delicate traditional Vietnamese tradition. Try their banana flower salad or mango salad as a starter, followed by a Pho or a Bo Bun – yum, so satisfying! As for dessert, I enjoyed the most heavenly fruit salad with mango, pineapple and jackfruit, sprinkled with basil seeds. 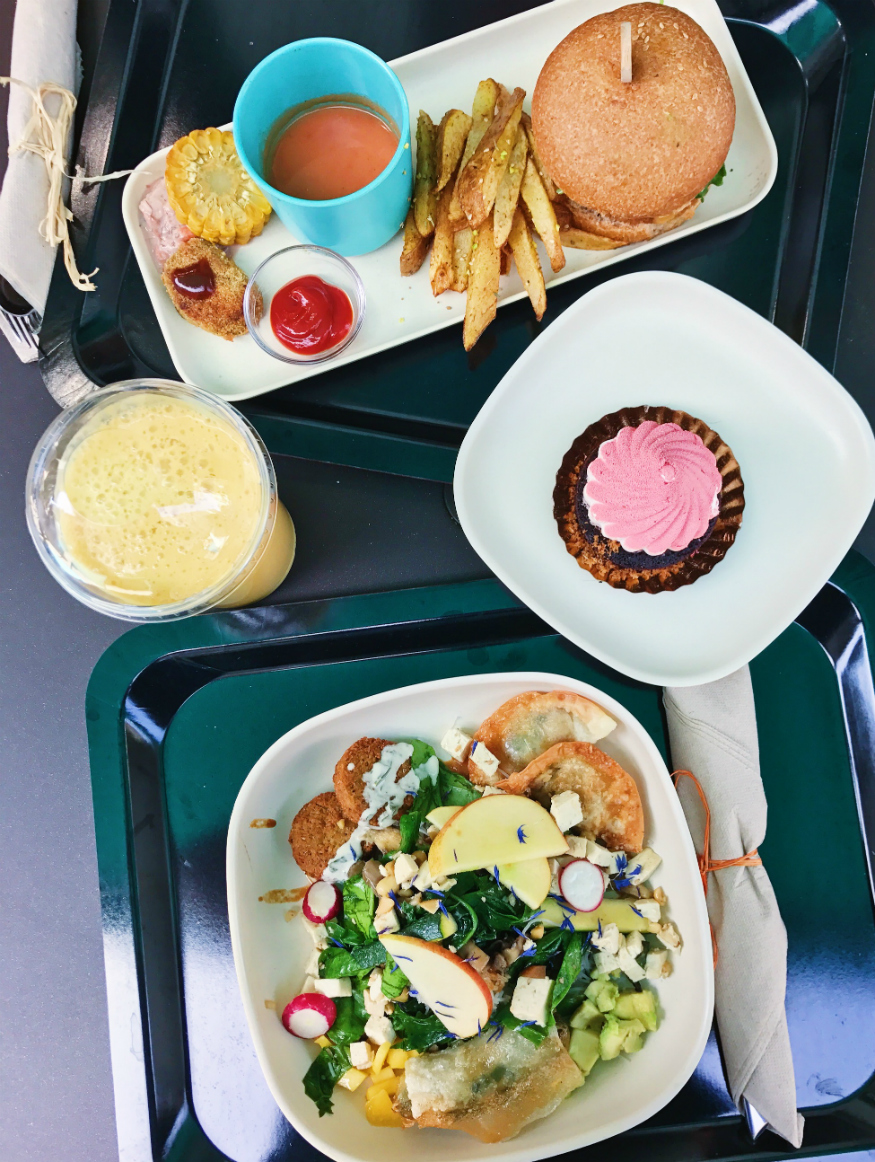 My latest discovery! Laelo is a wonderful healthy place to eat in the 10th, a very busy area where everything is hip and vegan. With one of the highest concentrations of vegan restaurants in Paris, it’s often referred to as Veggietown. The variety is amazing: they have kebabs, burgers, wraps, “fish” and chips, and it’s all organic and fresh. Their patisserie is so tempting, and you can be the maestro of your own salad by choosing everything you want in it. 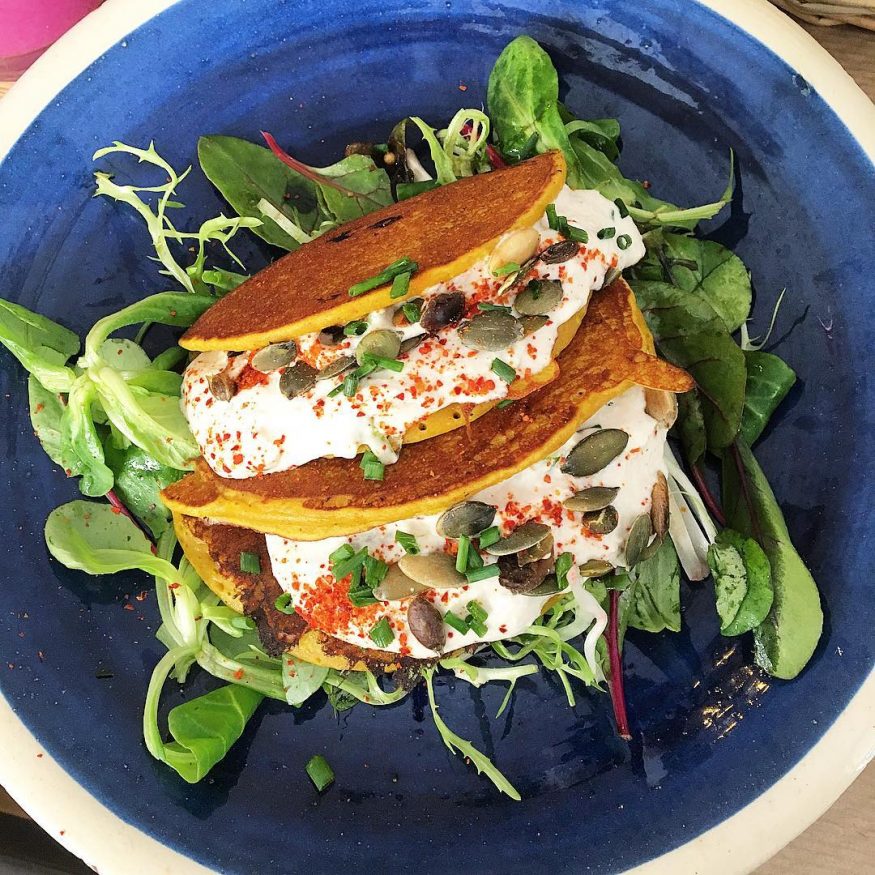 Be prepared for a flavour explosion! Le Potager de Charlotte is owned by two young brothers, Adrien and David. Adrien is a naturopath who convinced his family to become vegan, which led to them opening a restaurant with their mother Charlotte. The menu is seasonal, organic and gluten-free. The “egg” avocado or their rice crepes with chickpea cream is a must as a starter. The cauliflower gratin with portobello is a very tasty main dish, and for dessert, the chocolate mousse is absolutely exquisite. 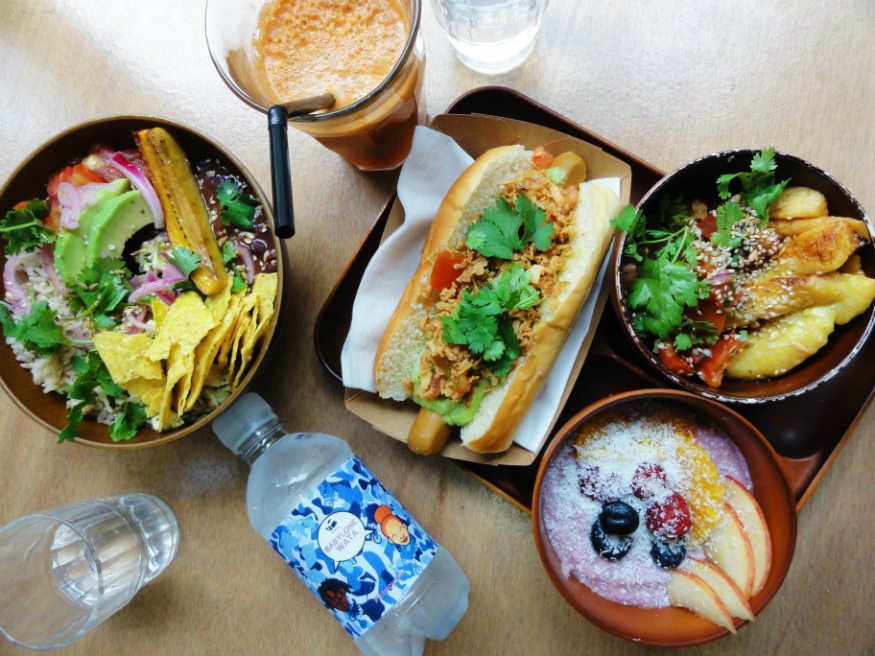 The coolest place in town ! It’s my absolute favourite place to eat in Paris. This Ital (inspired by Rastafarian movement) restaurant has Afro-Vegan good vibes, opened by the awesome couple Coralie and Daqui last summer after their first successful place (a tiny and very cute restaurant, Le Tricycle, where you can devour super tasty hot dogs and veggie bowls). Try their raw rolls with a scrumptious peanut sauce, finger-licking cauliflower wings with BBQ sauce, super bowl with ‘chilli sin carne’, roasted plantain banana cheddar sauce with tomato or avocado, or their classic hot-dog with a hickory smoked sauce. I also recommend their fresh made juice or Bissap for an antidepressant colourful kick. 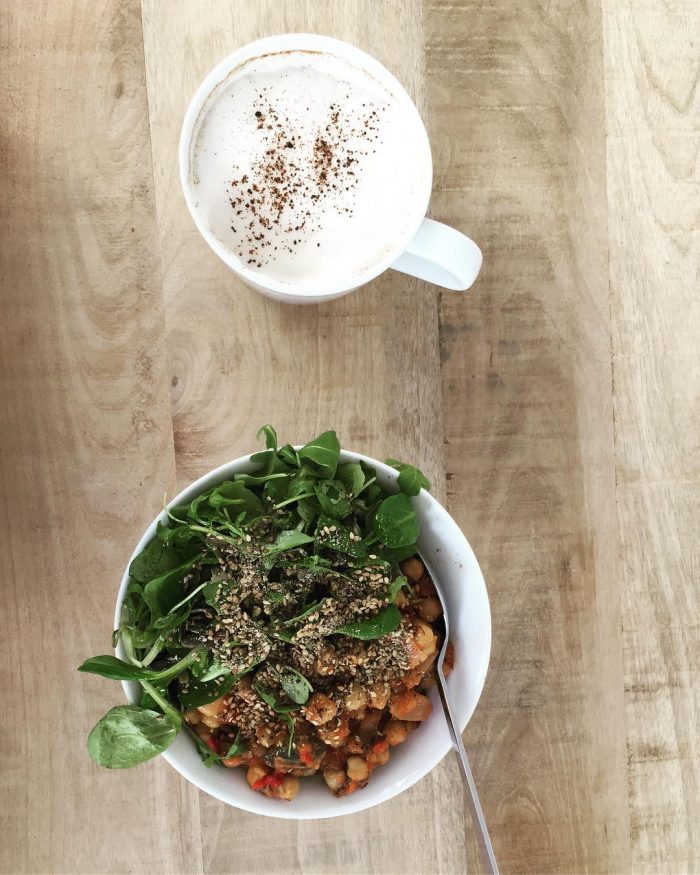 Oatmeal is a cosy mix between a tea salon, coffee shop and a small restaurant. Reale is the owner and she’s a lovely young woman who makes an amazing savoury oatmeal that warms the soul on winter days. The interior decoration is very stylish and you can enjoy a hot almond cocoa with marshmallows with some yummy pancakes drizzled with maple syrup. Here you will forget about the Parisian speedy life and stay warm in a sweet cocoon. 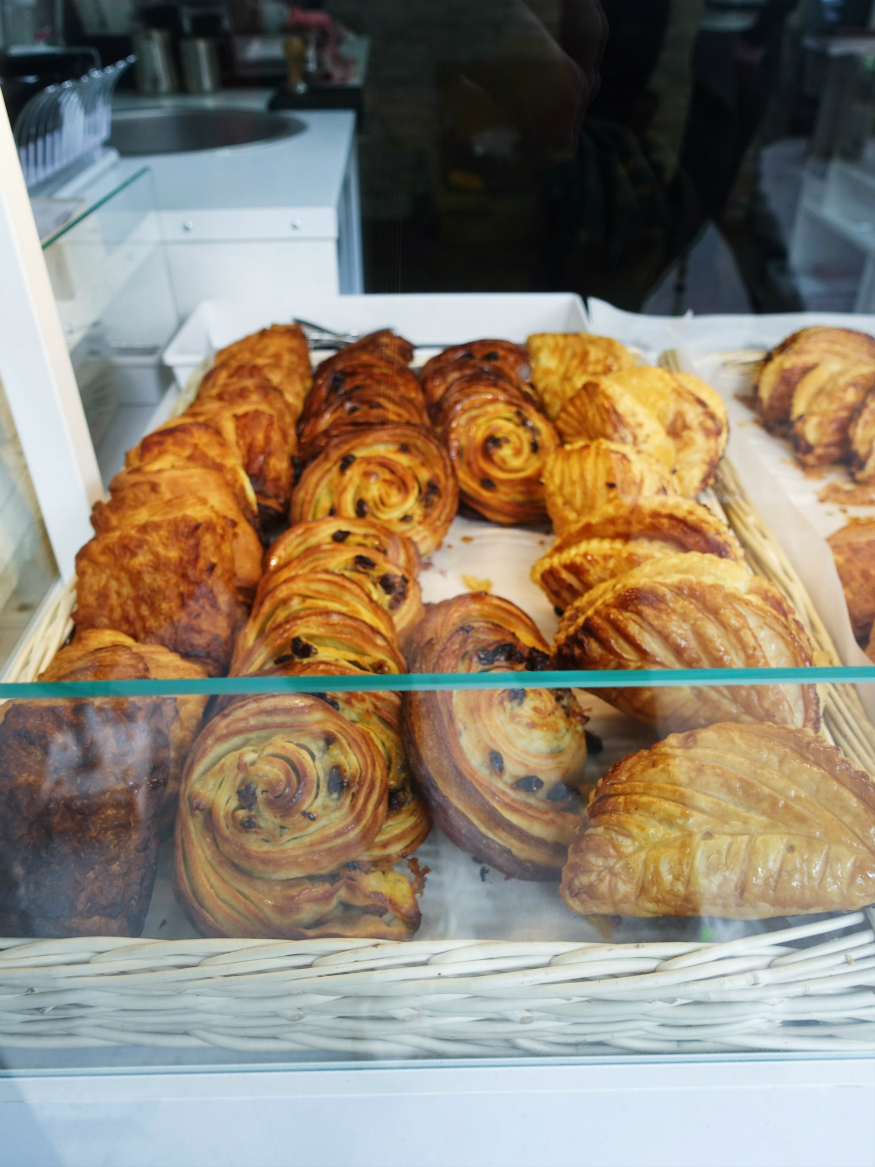 I live nearby VG patisserie but often I wish I didn’t! WHY? Because everything is so IRRESISTIBLE: the croissants, the pain au chocolat, éclair au chocolat, baba au rhum – the struggle is real!!! I stop by almost every day but soon I won’t be able to walk there but surely to roll. Berenice is a very impressive young woman who decided to open her own French patisserie where everything is vegan, organic and sumptuous. You can order your birthday cake here – and I can’t wait for mine! 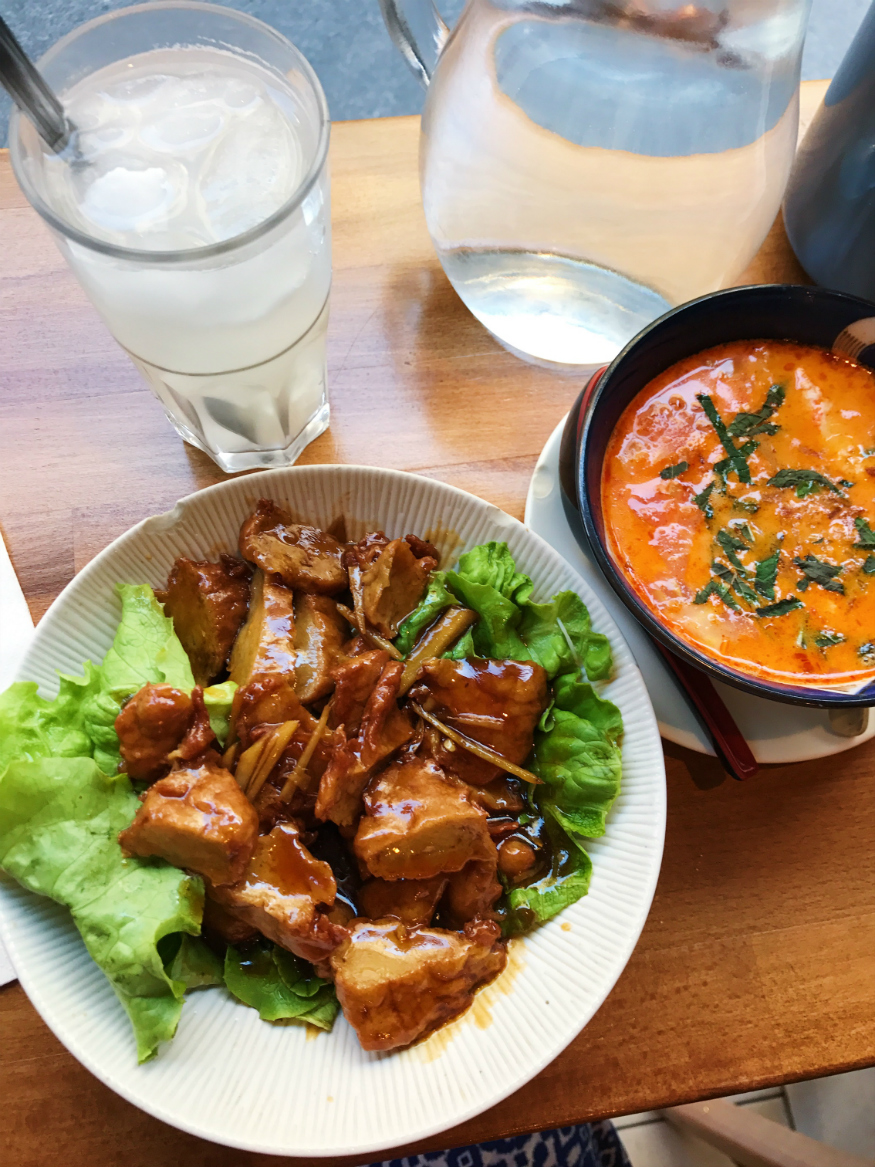 This Asian restaurant is heavenly. Another one of the vegan restaurants in Paris offering an amazing variety of Asian cuisine, including Vietnamese, Thai, Chinese and Malaysian. They’ve mastered the handmade ‘mock meat’ and I love the Nems, Coconut soup with ‘shrimps’, Bo Bun, Caramelized ‘chicken’ cooking pot, the ‘beef’ pot with black pepper…. the choice is huge!

The service is quick and their prices are very reasonable but they don’t take any reservations, so make sure to be there early.

🇫🇷 What are some of your favourite vegan restaurants in Paris? How does the city’s food scene compete? Tell us in the comments below 👇

Noémie, the founder of the ParisByVegan blog and Instagram account, switched from a vegetarian diet to a vegan lifestyle a few years ago. She was searching for inspo when she found a beautiful community through her Instagram (currently with over 165k followers) that inspired her to make her own breakfast bowls and smoothies, but as she’s a savoury person, she thought about doing it the French way and tried to veganize her own recipes, like tomato zucchini pie, croissants, cheese… that’s where the adventure began! You can find all her recipe in her Ebook here.